A devastated couple arrived at Sydney airport to find their beloved French bulldog Bruno had died after being left on the tarmac in blistering temperatures.

Kristina and Neil Maccabee were returning home after visiting family in Townsville, northern Queensland, over Christmas.

The couple, who always took Bruno everywhere with them, flew back to Sydney with Virgin Airlines on Boxing day, The Courier Mail reported.

Mr Maccabee dropped Bruno off to Townsville airport in the morning, but as it was a public holiday he had to be left with baggage handlers.

Due to the breed’s flat-nosed face, their respiratory system is more restricted and they find it harder to cool down in hot temperatures.

When dropping Bruno off, Mr Maccabee made sure he was hydrated and asked the baggage handlers to make sure the water was full before Bruno was put on the flight.

But when the couple boarded the plane they were horrified to see Bruno on the tarmac in baking temperatures.

‘He would have been out in the heat for half an hour, forty minutes,’ Mrs Maccabee said.

When they arrived at Sydney airport the couple’s worst fears were realised when a Virgin employee could not look them in the eye.

‘I just wanted to hold Bruno and I could see that he has obviously suffered, he got on the plane all fresh and he was all sweaty and had been sick and his water container was empty,’ Mrs Maccabee said. 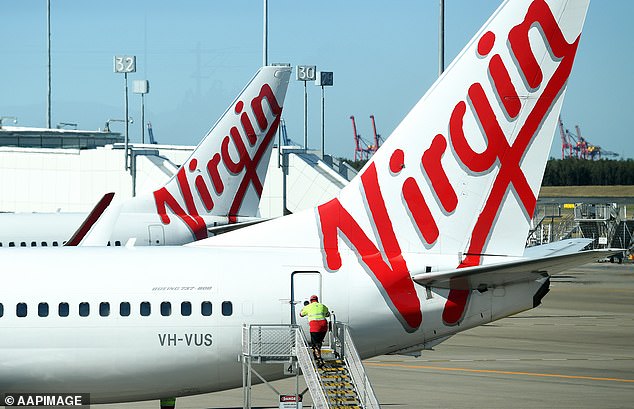 The couple say that although it was a public holiday, Virgin shouldn’t have dropped the ball when it comes to the health of animals.

Mrs Maccabee said she feels as if her dog’s life was on the same level as someone who lost their baggage.

‘Airlines must not fail in their duty of care, at every stage of the handling process. Pets are not just standard baggage. No excuses for neglectful treatment of animals,’ Mrs Maccabee said.

Virgin has promised the heatbroken couple they will complete a full investigation.

When they took Bruno to the RSPCA for an autopsy, they were told heat stroke was the cause of death.

Daily Mail Australia has reached out to Virgin for comment.