Virginia residents braced for a possible repeat of the deadly violence that resulted at the 2017 white supremacist rally in Charlottesville, which left a woman dead and 28 injured, as a gun rally was planned in the state’s capitol on Monday — the same day as the Martin Luther King holiday.

The rally is being held in protest of gun control measures that have been drawn up by the state’s newly Democrat-controlled legislature.

In response to the concerns, several militia leaders with large followings on social media who attended that Charlottesville rally said they were coming purely to show their support for those opposed to the state’s new, more restrictive gun laws. 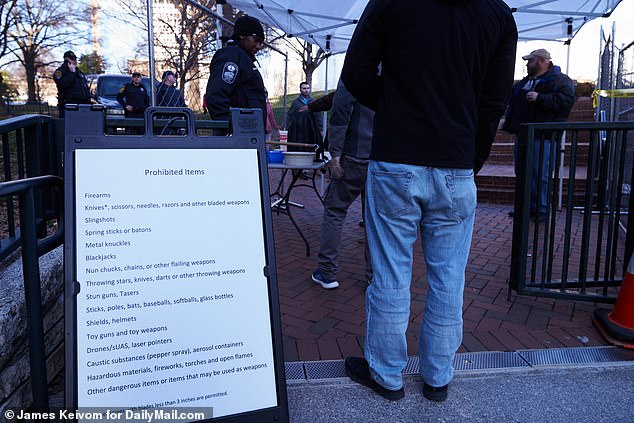 A list of prohibited items is posted at the entrance to the capitol grounds on the even of the gun rights rally to be held onb Monday, which is also the Martin Luther King holiday

‘If you think that we’re a threat coming into your city, then you don’t know who we are, you don’t understand what we’re about,’ said Joshua Shoaff, who has over 542,000 Facebook followers and goes by the pseudonym Ace Baker. ‘We’re not anarchists – we believe in government.’

Other leaders of well-known militias also vowed they were not seeking confrontations in Richmond. But police warned that among those they know to be attending are known neo-Nazis and other groups who may seek to hijack the gun-rights gathering.

Authorities say they are expecting several thousand people and are trying to keep the event from becoming violent.

Virginia Governor Ralph Northam this week temporarily banned all weapons from the area around the Capitol ahead of the demonstration.

Todd Gilbert, the Republican leader in Virginia’s House of Delegates, said in a statement on Saturday that violence was not welcome during Monday’s rally. 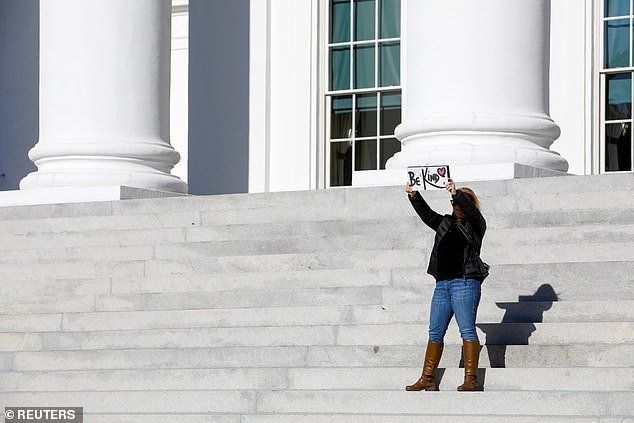 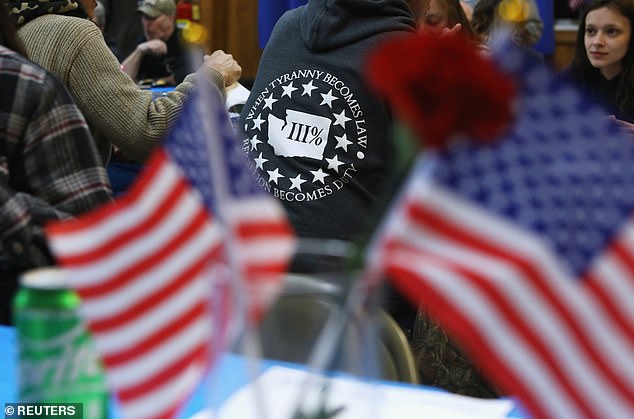 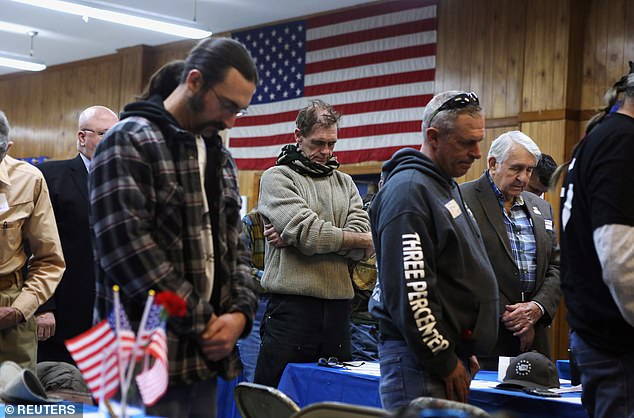 ‘Any group that comes to Richmond to spread white supremacist garbage, or any other form of hate, violence, or civil unrest isn’t welcome here,’ he said. ‘While we and our Democratic colleagues may have differences, we are all Virginians and we will stand united in opposition to any threats of violence or civil unrest from any quarter.’

Monday’s rally is being organized by the Virginia Citizens Defense League, a pro-gun rights group that annually comes out in force to lobby Virginia’s legislature to not pass any new gun laws.

The group is working closely with police, according to law enforcement officials, in an effort to pull off a smooth event – but they have called for tens of thousands of armed citizens to come to the event, hiking tensions.

President Donald Trump backed the rally organizers in a Twitter post on Friday in which he said the U.S. Constitution was under attack by recent gun control measures in Virginia, a state that Hilary Clinton won in 2016 and where Democrats took full control of the state legislature for the first time in a generation in November. 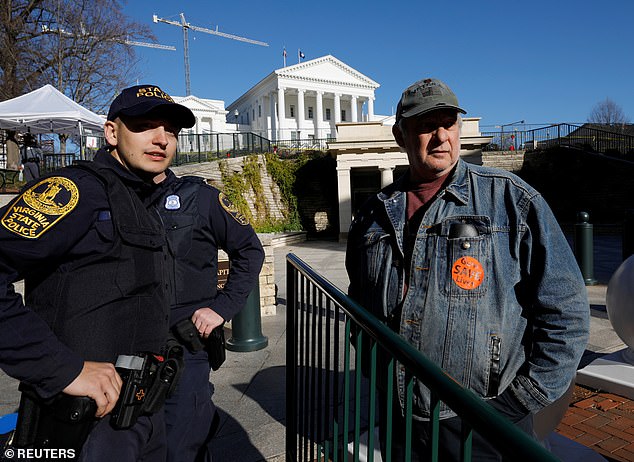 A gun rights activist with a ‘Guns Save Lives’ sticker talks with a policeman outside the Virginia State Capitol grounds before a Monday rally by gun rights advocates and militia members. Groups coming are working closely with police, according to law enforcement officials 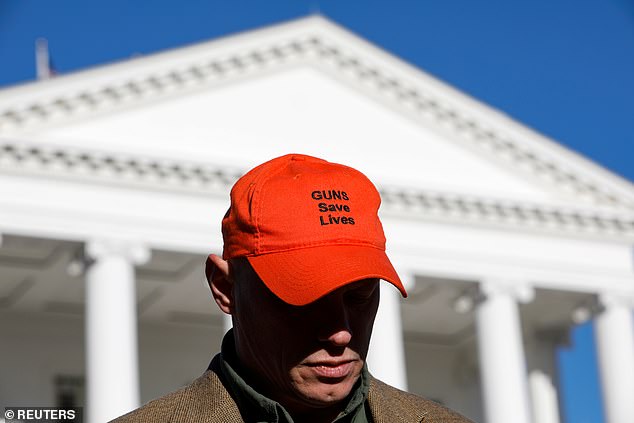 Thomas Speciale, who is preparing to run in the upcoming Republican primary for a U.S. Senate seat, wears a ‘Guns Save Lives’ hat in front of the Virginia State Capitol building before a Monday rally by gun rights advocates and militia members

‘Your 2nd Amendment is under very serious attack in the Great Commonwealth of Virginia,’ Trump wrote in the post, referring to the amendment in the Bill of Rights that gives Americans the right to keep and bear firearms. ‘That’s what happens when you vote for Democrats, they will take your guns away.’

Trump’s tweets in support of the rally also came as he lashed out at billionaire Mike Bloomberg, who’s entered the 2020 presidential race, for criticizing a former FBI agent-turned-volunteer security guard who took down the gunman in a fatal church shooting in Texas in December.

In a tweet late on Sunday, Trump said Bloomberg was against the Second Amendment and referred to his opponent in the presidential contest as ‘Mini Mike Bloomberg’.

‘Now Mini Mike Bloomberg is critical of Jack Wilson, who saved perhaps hundreds of people in a Church because he was carrying a gun, and knew how to use it. Jack quickly killed the shooter, who was beginning a rampage. Mini is against the 2nd A. His ads are Fake, just like him!’ Trump tweeted.

The Virginia Senate late on Thursday passed bills to require background checks on all firearms sales, limit handgun purchases to one a month, and restore local governments’ right to ban weapons from public buildings and other venues.

Both Virginia legislative houses are also expected to pass ‘red flag’ laws that would allow courts and local law enforcement to remove guns from people deemed a risk to communities, among other measures. 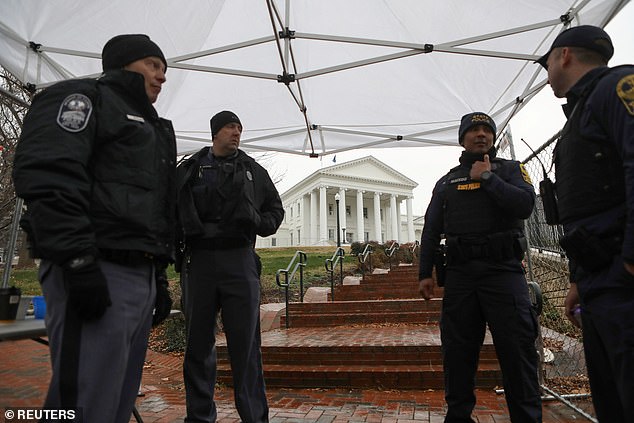