Virginia residents are fuming after a local newspaper published a KKK flyer, in full,  on its cover to illustrate a story about the hate group’s recruitment flyers.

When the April 25 issue of the Westmoreland News was delivered to their homes, Colonial Beach, Virginia, residents were said to be shocked to find a reproduction of a KKK recruitment flyer — complete with contact information — above the fold on the newspaper’s cover.

The flyer image accompanied a story about how some locals had found zip-lock bags with KKK recruitment flyers, which contained both racist and anti-Semitic messages, and DVDs on their front lawns on April 14.

Colonial Beach, Virginia, residents were outraged when the Westmoreland News reproduced a KKK recruitment flyer on the cover of their newspaper to accompany a news story

‘They posted the whole flyer as if they were giving them free advertising,’ Colonial Beach resident Betty Tate Thompson told WTVR, adding that it was ‘totally ridiculous’ that the newspaper had including the contact number for the head of the KKK.

Police Chief Danny Plott said that he had given the flyer to the Westmoreland News just to alert them that the flyers were being distributed to property owners and he had not expected to see the flyer in print.

Plott said that he was ‘shocked’ and sent a ‘very strongly worded email’ to the newspaper. He was then contacted by the editor, who he said told him that they had decided to run the flyer as a way to illustrate that racism exists in their community, to those who believe otherwise.

‘I think she didn’t expect for this to blow up the way it did,’ Plott told WTVR. 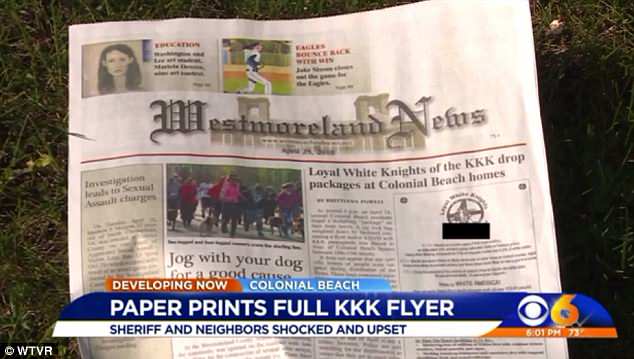 The newspaper failed to remove the KKK group’s contact information from their reproduction, as has been done by other news organization which have used similar images in news stories 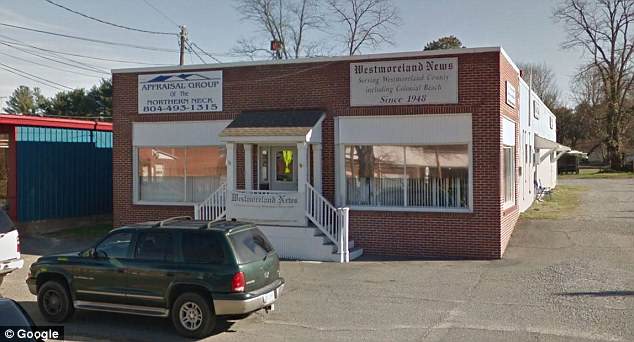 When reprinting the flyer, the Westmoreland News did add a disclaimer noting that it ‘in no way condones or supports the content or message of this flyer, nor does it condone or support any branch of the Loyal White Knights, or the KKK.’

Unlike other news organizations that have chosen to illustrate their news stories with similar examples of KKK propaganda imagery, the Westmoreland News did not remove contact info from the flyer, nor did it find a way to distinguish the flyer’s appearance from the way a typical paid ad in a paper might look.

Since the KKK flyer ran on the cover of the paper, the Westmoreland News’ Facebook page has been inundated with one-star reviews from people complaining about its editorial decision.