Other consortiums, including the Queensland government, have withdrawn from the race to buy the embattled carrier.

Rival Virgin Australia bidder Cyrus Capital Partners announced on Friday morning they would be withdrawing their interest in buying the airline established in Australia in 2001 by billionaire entrepreneur Sir Richard Branson.

It confirmed that Deloitte, the administrator of Virgin Australia Holdings, had not expressed interest in its bid, leaving Bain Capital as the remaining suitor.

Virgin Australia airlines is likely to be bought by American private equity firm Bain Capital. Pictured is a traveller walking past a Virgin Australia sign at Adelaide airport

‘On the morning of 22 June 2020, Cyrus presented to the administrators of Virgin Australia Holdings an offer to acquire the airline, its regional business and the frequent flyer program Velocity, in accordance with the administrators’ procedures,’ Cyrus Capital said.

‘However, since then, the administrators have not returned calls, emails, or meaningfully engaged with Cyrus to progress its offer.’

The development is occurring a day after Virgin’s chief rival Qantas announced it would be cutting 6,000 jobs as the coronavirus crisis kills of international air travel and cripples airlines.

Even before the coronavirus pandemic and the closure of Australia’s border on March 20, Virgin Australia was struggling financially, making a net loss in eight of the past ten financial years.

In early March, Standard & Poor’s downgraded its outlook for the airline from stable to negative, with the airline’s losses during the past decade exceeding $2.1billion.

It was placed into voluntary administration in April, the first Australian airline to be in this position since Ansett Australia ceased operating in September 2001.

It was wound up the following year.

During the final six months of 2019, Virgin Australia made an after-tax loss of $88.6million.

During the past decade, its full-year losses have added up to more than $2.1billion, even when the years of profit were factored in. 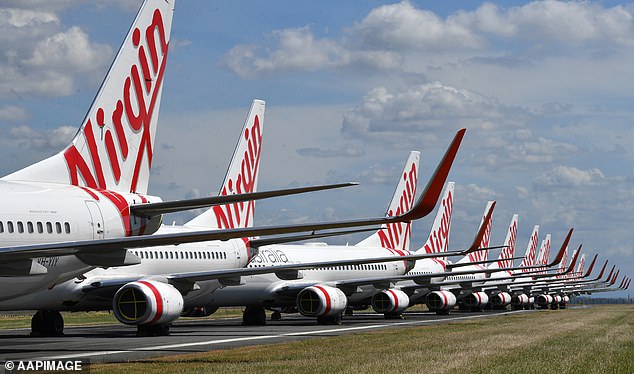 Rival Virgin Australia bidder Cyrus Capital Partners announced on Friday morning they would be withdrawing their interest in buying the airline established in Australia in 2001 by billionaire entrepreneur Sir Richard Branson. Pictured are Virgin Australia aircraft grounded at Brisbane airport