Vision of courage:  How a blind man is marching the length of Britain

Walking the length of the country, nearly 1,000 miles from Land’s End to John O’Groats, would be a tough test for anyone.

But for Julian Jackson there is an added challenge — he can see none of the route because he is blind.

The 55-year-old consultant and events organiser from Wiltshire is currently half way through the seven-week challenge —the Big Blind Walk — to raise £350,000 for eye research.

Man-power! Julian Jackson is walking the length of the country, nearly 1,000 miles from Land’s End to John O’Groats, to raise money for sight loss sufferers

The walk, so far through ten counties, has been an extraordinary experience, says Julian: ‘I’ve had terrible blisters, open wounds on my feet and swollen legs caused by a bacterial infection from the soles of my feet.

‘Other than that, I’m feeling great. I am listening to my guide-walkers describing the scenery and to birdsong. I can smell the flowers — wild garlic and carpets of bluebells — and feel the different terrain and gradients. It’s wonderful.’

Julian is driven by frustration that too little is being done to prevent people losing their sight, or to treat eye disease and restore sight.

In the UK, around two million people are living with sight loss that has a significant impact on their daily life (of those, one in seven is blind). By 2050, that number is expected to double to four million as the population gets older and levels of obesity and diabetes — which are strongly linked to eyesight problems — continue to rise.

And, as the Mail reported yesterday, many patients with cataracts aren’t even being given the treatment they need, with two in three health trusts refusing to refer them for surgery in defiance of official guidelines.

‘There is a huge public health crisis looming in sight loss,’ says Mike Daw, chief executive of the National Eye Research Centre. ‘We need to up the pace of eye research. 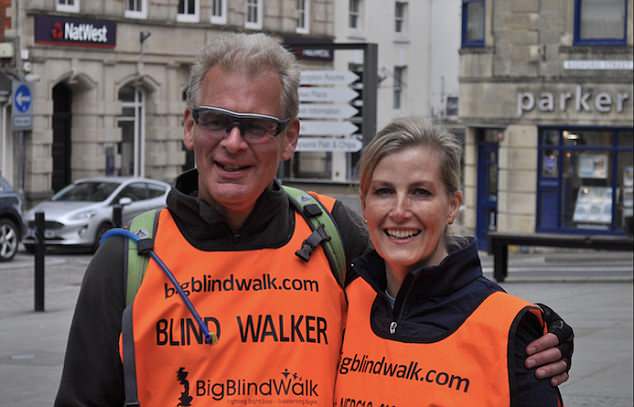 In good company: Julian pictured with Sophie, Countess of Wessex, during the walk

‘This will allow people to live longer and better, rather than passively accepting sight loss and simply helping people to live with it, as is currently the case.’

‘For too long, eye research has been a “Cinderella” branch of medicine,’ agrees Julian. ‘Less than 2 per cent of medical research is directed at eye disease.’

According to a 2014 study by UK Health Research Analysis, £22 million was spent on eye research, compared with £402 million on cancer and £138 million on cardiovascular disease.

‘There is a mindset in this country that once you’ve been given a white stick, that’s the end of the story, and it really shouldn’t be like that,’ says Julian.

‘Can you imagine what it’s like to be told, “You are going to go blind, there’s nothing we can do”? Too many people get told this news.’

There is a mindset in this country that once you’ve been given a white stick, that’s the end of the story, and it really shouldn’t be like that.

Julian always knew he was going to lose his sight. He was born with an eye condition called retinitis pigmentosa (RP), where the light-receiving cells at the back of the eye (the retina) gradually stop functioning. It is a genetic condition which he inherited from his mother’s side of the family.

Julian and his twin brother Jamie, a writer, were diagnosed with RP when they were three years old, after they started having difficulty seeing in low light.

‘There is currently no treatment and no cure,’ says Julian. ‘Some people lose their sight very quickly, others plateau and lose it gradually or don’t lose all of it. When I was diagnosed, my mother was advised by the consultant to take us to a faith healer.

‘I wore glasses from a young age and had to sit at the front of the class so I could see. We got through mainstream school and both went to university.’

Despite his gradually worsening eyesight, Julian had a successful career, married Laura, now 52, and has a daughter Imogen, 18.

‘But I lived in denial,’ he says. ‘I refused to have a white stick even though I probably needed one. I’d had only 2 per cent vision in my left eye for about 20 years — before completely losing my sight — so it took time to recognise people and I had to move around more slowly.

‘When I met Laura, I had to have conversations with her about the future. Also, because RP is genetic — and women are carriers, though they don’t develop it — there are implications for my daughter, who is a carrier. If she has a son, there is a 50/50 chance he will have it.’ 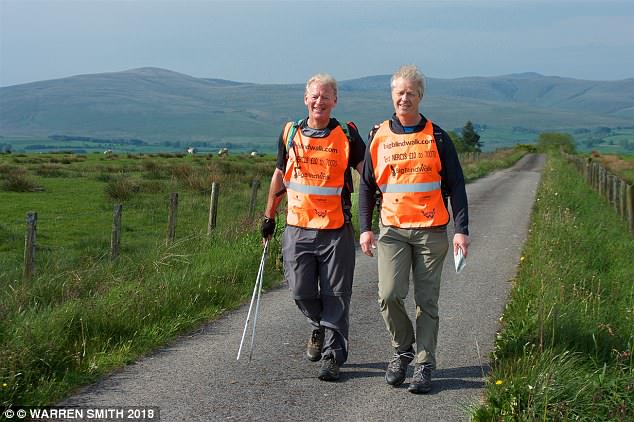 What a guy! The 55-year-old consultant from Wiltshire is currently half way through the seven-week challenge —the Big Blind Walk — to raise £350,000 for eye research

‘It went very suddenly,’ he says. ‘I woke up one morning and couldn’t see my family or my face in the mirror. It was an alarming, disorientating, isolating experience.

‘One day I could move around my house as normal; the next day I couldn’t. Now I can see light but have no perception of movement.

‘The only help I could get was rehabilitation equipment. Things such as audio software to allow me to use a computer, white stick training and the offer of a guide dog, which I really appreciated. But none of that is going to bring my sight back, or anyone else’s.’

While RP is rare — affecting one person in every 3,000 to 4,000 — more common causes of sight loss and blindness include: age-related macular degeneration, a condition of the central part of the retina that affects 475,000 people; diabetic retinopathy (damage to the retina caused by diabetes, affecting 95,000 people); glaucoma (damage to the optic nerve caused by fluid pressure in the eye, which affects 145,000); cataracts (a clouding of the lens which affects 380,000); and refractive error, which covers common problems such as short and long-sightedness, which affects around 785,000 people and can be treated but may cause sight loss if those affected don’t wear the right glasses.

Sight loss can lead to depression, isolation, loss of employment and hardship. A study of more than 1,000 British patients at a low-vision clinic, published in the journal Ophthalmology, found that 43 per cent had symptoms of depression.

The Government recommends that everyone has an eye test every two years, which includes checks for early signs of glaucoma and cataracts, which can be treated to prevent sight loss. If you have diabetes, eye checks should be more frequent, and for those over 40 with a direct family history of glaucoma, you can get a free eye test every year on the NHS. 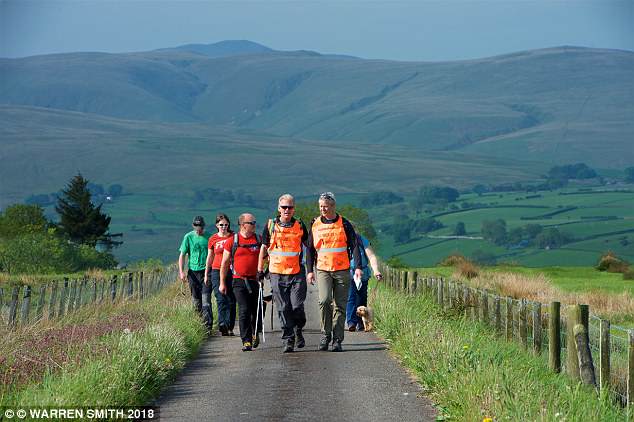 Rich life: Despite his gradually worsening eyesight, Julian had a successful career, married Laura, now 52, and has a daughter Imogen, 18

Yet in 2016, a poll of 10,000 adults for the charity the Royal National Institute of Blind People (RNIB) revealed that more than a quarter of us — 27 per cent — don’t have our eyes tested every two years.

‘There is a big misconception that eye tests are about selling glasses. They are about the health of your eye,’ says Louise Gow, an optometrist and specialist lead for eye health at the RNIB.

Lifestyle is also vital, she says: ‘Exercising to lower blood pressure, keeping diabetes under control if you have it, eating plenty of green leafy vegetables, not smoking and drinking moderately can really help with eye health.’

Mr Daw adds: ‘Vision loss could be prevented in about half of the two million with significant visual impairment, yet many let eye checks drift. By the time they go to a GP or optometrist, they have lost a significant degree of their sight that may not be regained.’

Julian, who now runs a social enterprise called VisionBridge, which raises awareness of sight loss and provides eye research, decided to walk the famous route, inviting friends, eye specialists and members of the public to join him along the way.

Julian is due to finish the walk on June 22. Those backing him have included Sophie, Countess of Wessex, whose daughter Lady Louise Windsor was born with a squint.

Three-quarters of the money raised will go to the National Eye Research Centre, and a quarter to VisionBridge. ‘I try to remain positive,’ says Julian. ‘I hope eye research will one day restore my sight.’

To track Julian along the route and make a donation, go to bigblindwalk.com