Visitors to Disney World in Florida and Disneyland in California may have to wear a mask once the theme parks reopen.

The idea was mooted by Walt Disney CEO Bob Chapek during an interview on Monday.

‘I think that the masks for the guests will be something that culturally is, is different. In Asia, as you know, it’s fairly commonplace, even before COVID for folks to walk around in public with masks on. That is not the case in the U.S.’, Chapek said.

A young visitor, wearing face masks, waves at the Disneyland theme park in Shanghai as it reopened after the coronavirus closure on Monday 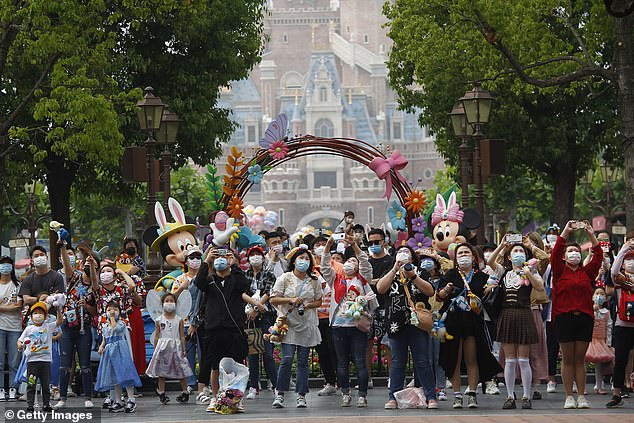 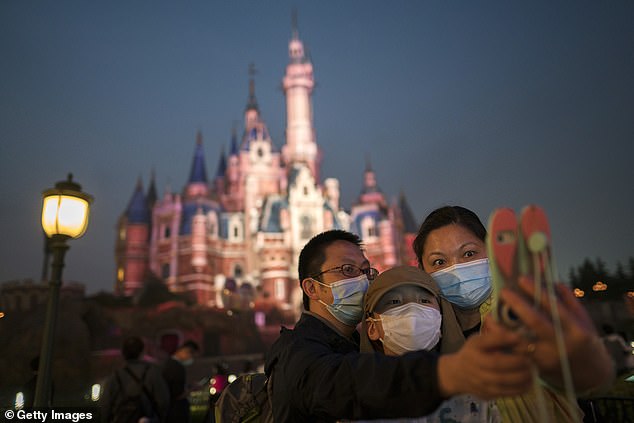 Shanghai Disneyland has reopened its gates following months of shutdown, offering a potential model for other mass entertainment venues around the world to open for business during the pandemic with guests forced to wear masks 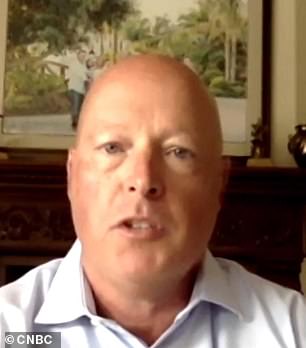 Disney CEO Bob Chapel: ”We’re going to do our part, and we need guests to do their part too,’ he said

Although no firm dates for reopening either venue have yet been set, potential guests to the famous parks may have no other option but to wear face coverings in 90 degree summer weather, if they are to be allowed into the usually crowded destinations.

Speaking on CNBC, Capek was asked whether Disney World would open in July but he refused to give a direct answer and stated that the company is working with state and local leaders alongside medical professionals who will help to decide when it might be safe to resume operations.

There are some early signs of the business reopening which has been closed since mid-March.

The Disney website is now allowing bookings for travel dates from July 1 and later.

Disney Springs, a shopping and restaurant complex in Orlando close to the parks is also hoping to reopen on May 20th. 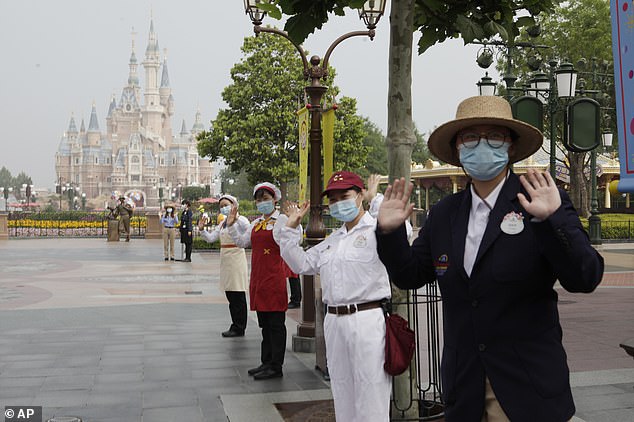 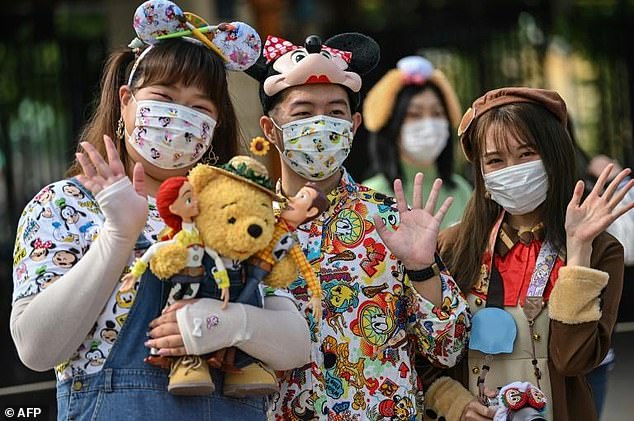 Across the other side of the world, Shanghai Disneyland reopened on Monday with all the tickets for the entire week sold out.

‘Essentially, everything is gone,’ Chapek said. ‘This is really indicative, I think, of the love consumers have for our brand across the world.’

The Shanghai park is operating with reduced visitor numbers with less than 30% of its usual capacity – or about 24,000 visitors.

Typical capacity in the Shanghai park is 80,000 visitors a day and the company plans to allow more visitors into the amusement park each week. 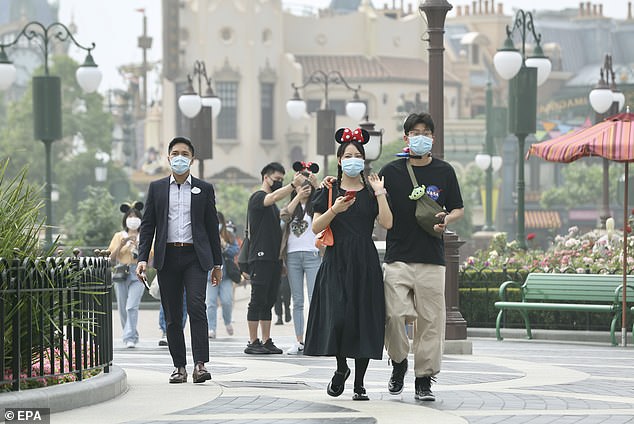 The Disney resort in China’s most populous city was first shut down on January 25 due to the virus epidemic. Pictured, visitors touring in the Shanghai Disneyland on Monday 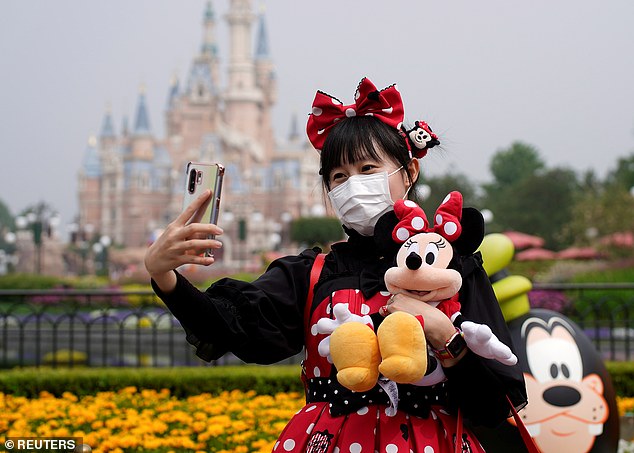 The theme park in China’s most populous city is the first of the entertainment conglomerate’s six main Disney resorts around the world to reopen.

‘We’re moving slowly, but we’re very encouraged by what we see in Shanghai,’ Chapek said but he noted that if the parks in the U.S. were to ever reach 100% capacity again, guests will need to wear masks at first.

‘We’re going to do our part, and we need guests to do their part too,’ he said.

Chapek called the opening in Shanghai a baby step, but said he is encouraged by what he’s seen. 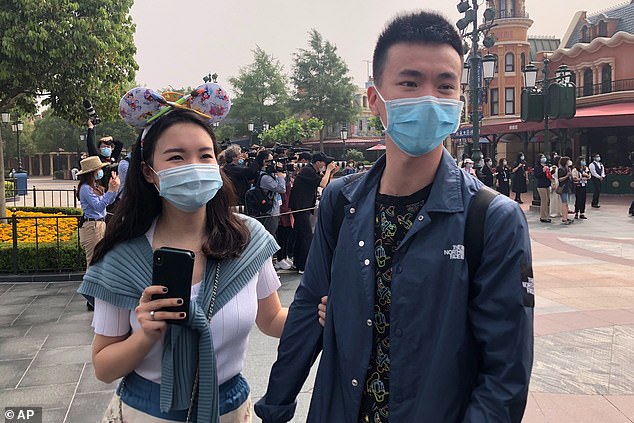 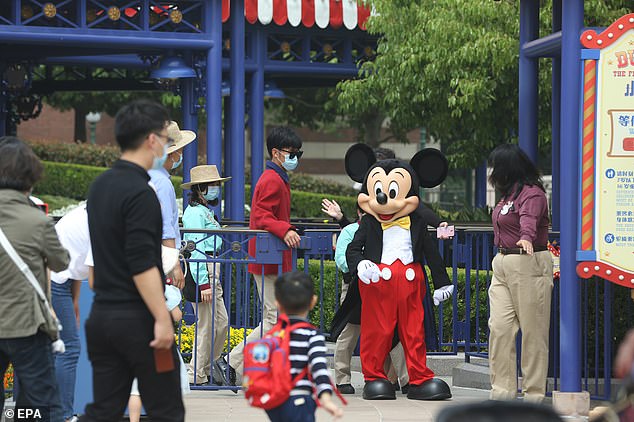 Visitors have their temperatures checked on arrival and show a government bar code designed to prove they are not a health risk.

Speakers on a recorded loop asked people to wear masks at all times and reminded them to obey social distancing, including in queues and on rides.

Disney said there would be increased frequency of disinfection, and the park will limit or suspend performances that often include interaction between visitors and characters such as Mickey Mouse. 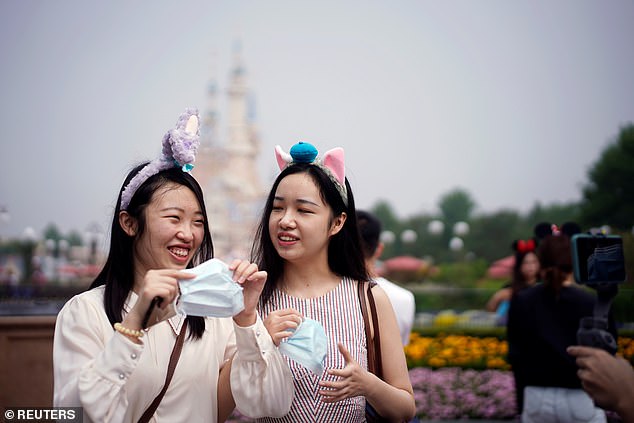 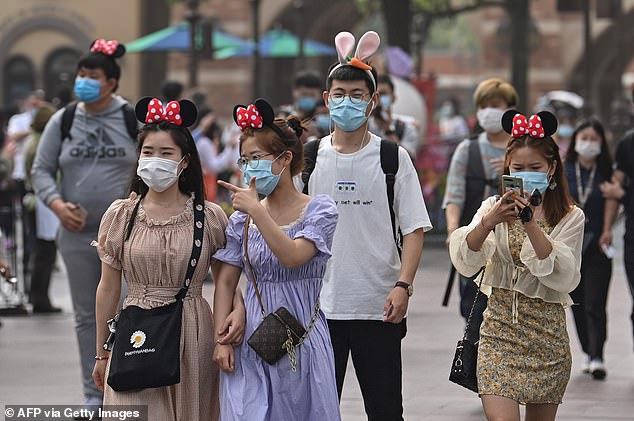 Decals on sidewalks and at lines for attractions show visitors where to stand to keep a safe distance. The company said rides would be limited to one group of visitors per car to keep strangers separated.

‘This is a first step, it’s a baby step. And we’re moving slowly, but we’re very encouraged by what we see in Shanghai.’

The pandemic has dealt a massive blow to the company’s theme parks and other operations.

Revenue at its ‘Parks, Experiences and Products’ division fell 10 percent to $5.5 billion in the first three months of the year and the segment’s operating income fell 58 percent, the company said.

Disney shuttered the Shanghai park in late January, followed by others in the United States, France, Japan and Hong Kong.