Visits to shops fall by 44MILLION compared to December last year: British retailers suffer through one of the worst Christmases on record, figures show

By Neil Craven and Jonathan Bucks For The Mail On Sunday

British retailers are suffering in what may be the worst Christmas season on record with the number of shoppers hitting the high street down by tens of millions, according to shock new figures.

Shopping visits in December are down by 3.6 per cent against the same month last year as the alarming retail slump gathers pace.

The figures translate into a fall of 44 million shopping visits from 2017 – but shoppers now can console themselves with the silver lining of huge bargains to be found in the coming weeks as big-name stores resort to desperate measures in a bid to attract business.

Last year’s shopping figures were already woeful, having fallen by a painful 3.5 per cent from 2016.

The figures mean huge bargains will be found in the coming weeks as big-name stores resort to desperate measures in a bid to attract business.(Stock image)

But in December 2017 retailers could at least in part blame the slump on the snow and ice that blighted the country in the run-up to Christmas.

Now the outlook for retailers is worsening week by week with a string of bad news stories for names that have been a part of the British high street for many decades.

Music and video retailer HMV went into administration on Friday.

New Look, Jamie’s Italian, Carpetright and Prezzo have together had to resort to closing hundreds of outlets and laying off thousands of staff in the struggle to survive.

‘People have left it very late to shop in the hope of getting bigger discounts. But the worry is that fewer people are going out and spending less when they do because it’s all been bought on discount,’ said Diane Wehrle, marketing and insights director for retail analysts Springboard.

‘Fashion has been really difficult because costs have gone up and margins are thin. But the weather really has an impact.’ 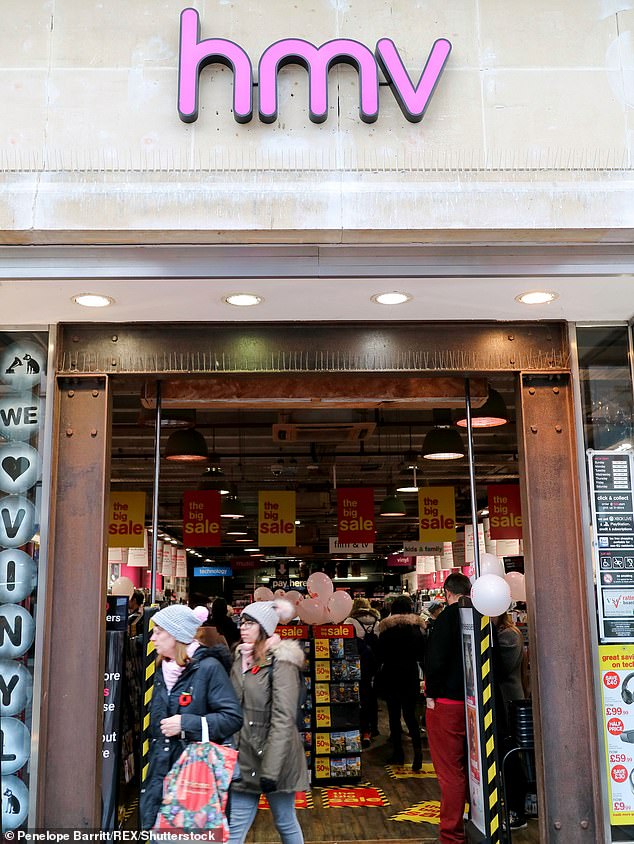 According to shock new figures British retailers are suffering in what may be the worst Christmas season on record. This comes as music and video retailer HMV went into administration on Friday

She added that the cumulative decline in footfall over the past two years is more than 7 per cent, causing severe pain for many.

Many clothing retailers are now offering 60 per cent off as standard including House of Fraser – which collapsed in the summer and has since been acquired by Sports Direct tycoon Mike Ashley – Debenhams and H&M.

Topshop and others have slashed prices by 70 per cent or more to clear stocks. Marks & Spencer plans to open 140 stores on New Year’s Day.

The annus horribilis for the high street has also seen internet retailers suffer.

Asos, the biggest UK online-only fashion outlet, issued a shock profit warning just before Christmas and has slashed prices by up to 70 per cent.

‘In fashion we are seeing an unprecedented level of discounting, certainly something I have not seen before, and that’s across the board,’ said the company’s chief executive Nick Beighton.

Even the typically resilient high street giant Primark has been hit. Earlier this month it warned that trading was ‘challenging, in a tough retail market’.

Business analysts have warned that they fear 164,000 jobs will be lost in the British retail industry next year.

Sir Stuart Rose, the former M&S chief executive who is now chairman of online supermarket Ocado, said: ‘Why would it get any better? I can see no reason why it will get any easier. Somebody will have an accident next year, definitely.’