Las Vegas showgirls entered the age of coronavirus on Thursday by wearing masks at the grand re-opening of Bally’s hotel and casino after a four-month shutdown.

The dancers put on a show at the entrance to the Vegas resort, wearing blue face coverings to match their costumes – and were joined by an Elvis impersonator.

Bally’s closed its doors on March 18 as coronavirus cases began to spiral out of control in the US and finally re-opened yesterday, welcoming tourists back to its bars, restaurants and swimming pool.

Masks are compulsory and there are limits on the number of blackjack and roulette players, as Las Vegas tries to re-open its economy despite being named by the White House as a high-risk area. 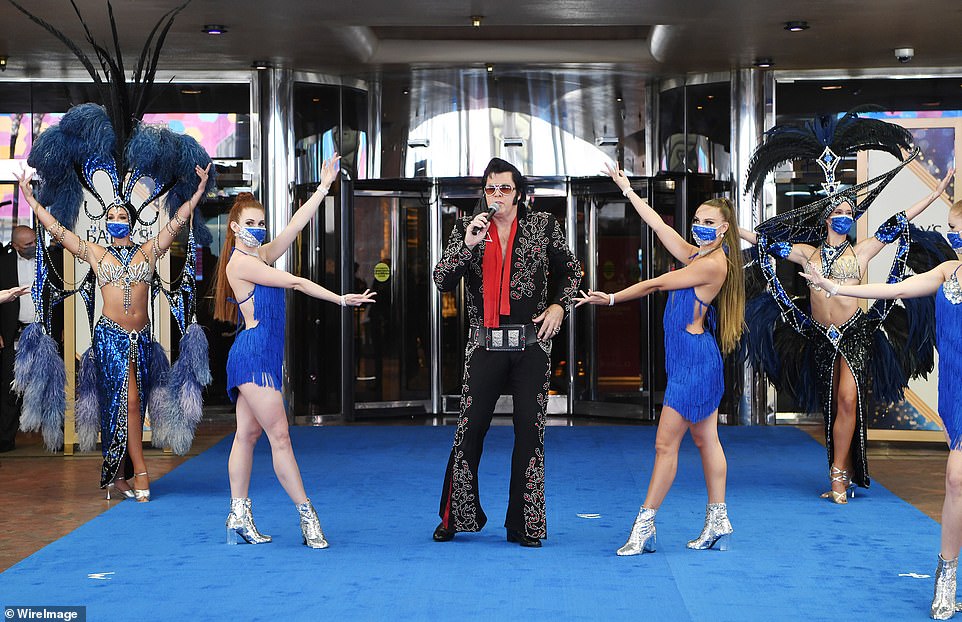 Special guest: Some of the Vegas showgirls pose for a picture with an Elvis impersonator at the entrance to Bally’s yesterday. The hotel and casino closed its doors on March 18 because of the coronavirus pandemic 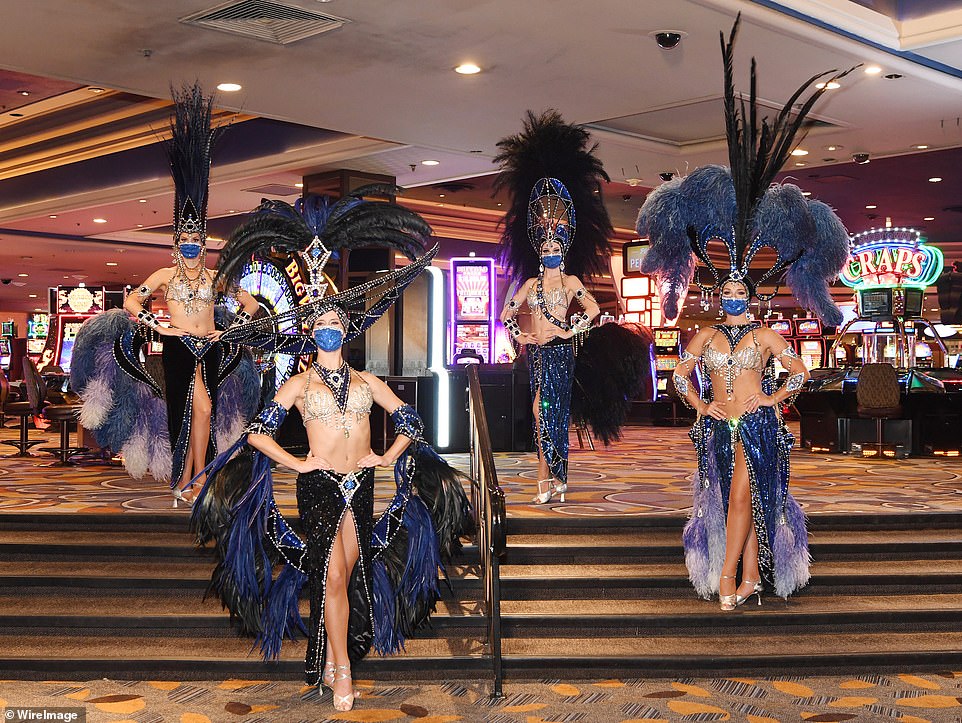 Entertainment: The showgirls wearing their masks on the casino floor, where slot machines have been rearranged to allow for social distancing and some card games have limited numbers of players

Guests are required to wear masks except when eating or drinking, a policy which has already infuriated one visitor who refused to lounge by the pool with her face covered in 100F heat.

‘You have to wear a mask, so we didn’t go to the pool. I don’t know who made that rule. What an idiot,’ JaNeed Bird told Reno’s Gazette-Journal.

Bird said she and her husband Rick are ‘very loyal’ visitors to Vegas but said it was ‘not as much fun’ because of coronavirus-related restrictions.

Bally’s has also reduced the capacity on its casino floor in order to ‘allow for appropriate social distancing’ while guests are banned from ‘congregating’ around a table to watch a card game unfold.

Blackjack will be limited to three players, while roulette is capped at four, and dealers have instructions to hand out hand sanitizer to every player.

The cards will be replaced more frequently than before the pandemic, while ‘high touch’ items such as dice and chips will be routinely disinfected, managers say. 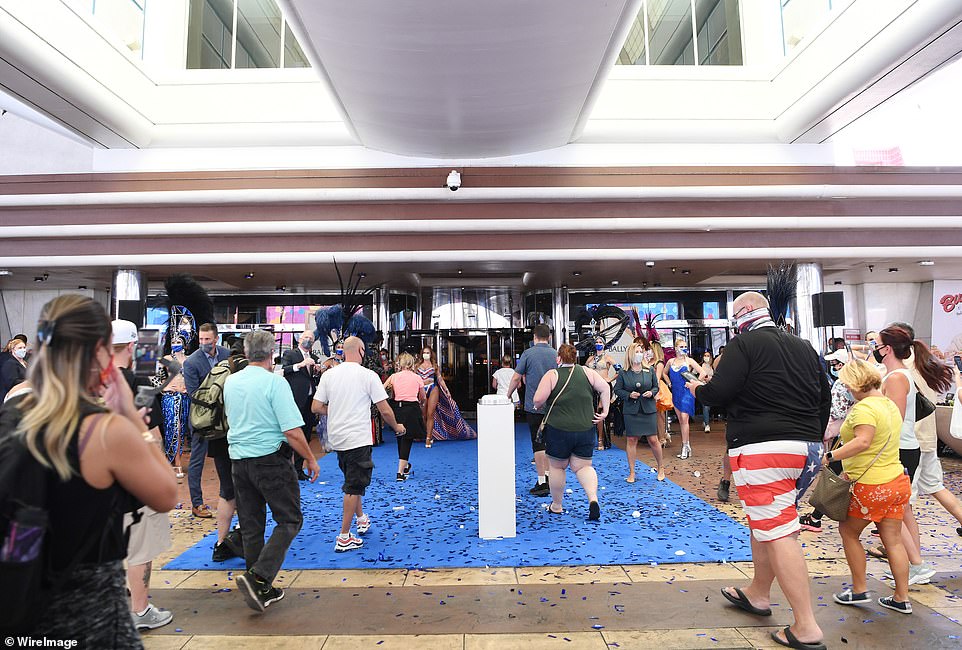 Welcome back: Guests wearing masks arrive at the Bally’s Las Vegas grand re-opening celebration on Thursday, as the resort opens its doors for the first time in four months 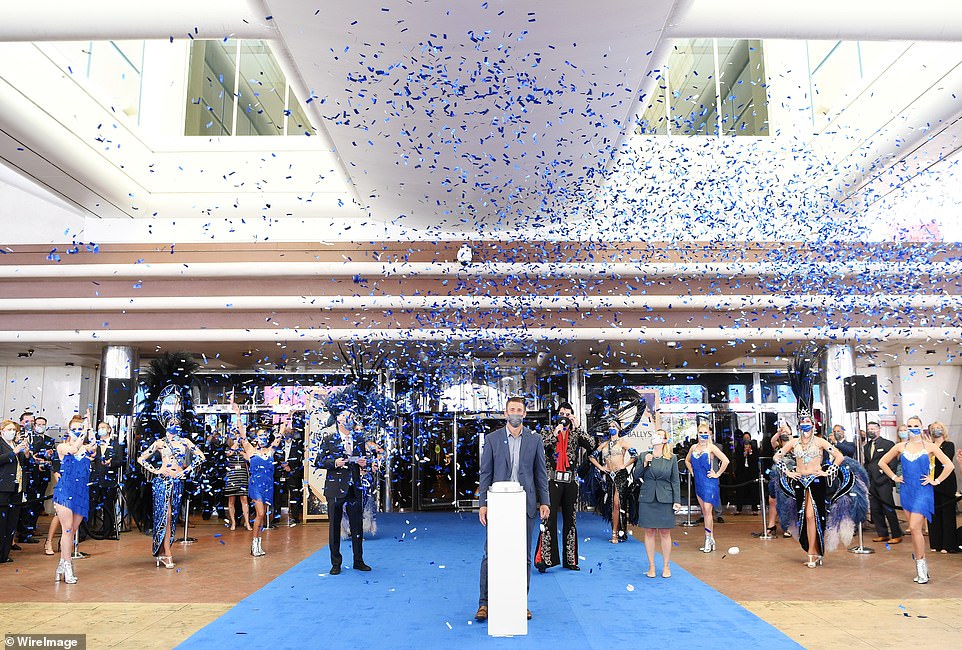 Celebration: Confetti flies in the air as Bally’s showgirls wearing masks stand around a series of Caesar’s Entertainment officials at the entrance to the hotel, while the Elvis impersonator is now wearing a mask 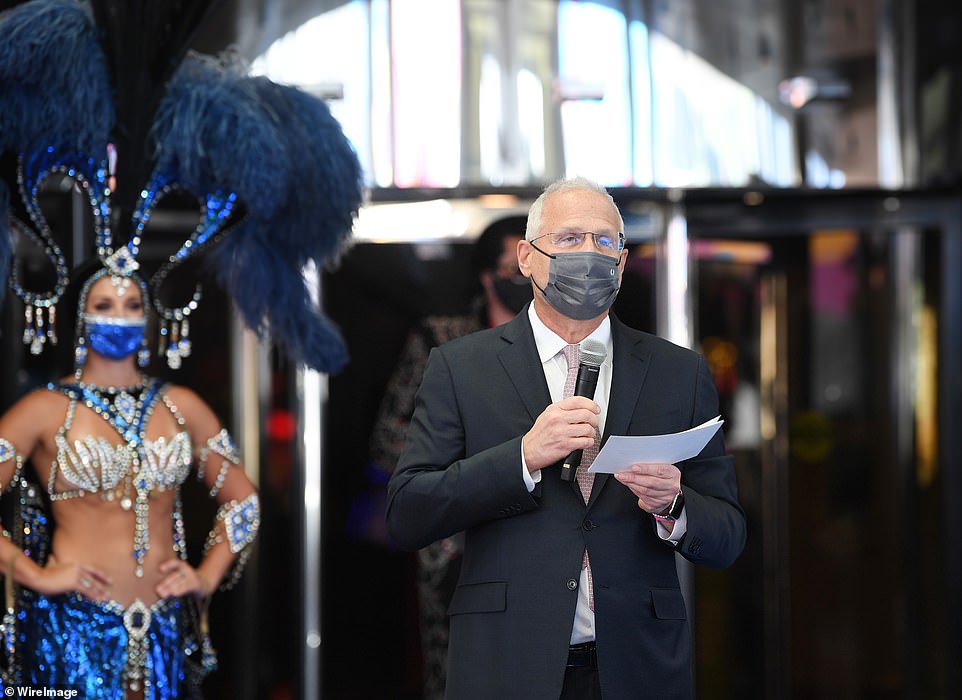 Masked up: Gary Selesner, the regional president of Caesar’s Entertainment, is watched by one of the showgirls as he speaks during the grand re-opening ceremony on Thursday

Slot machines have also been rearranged to allow for social distancing, while signs have been marked out to indicate where people should stand in a line.

White House task force member Dr Deborah Birx this week named Las Vegas as one of a series of coronavirus trouble spots, along with cities including Baltimore, New Orleans, Cleveland, Indianapolis and Miami.

City officials say they are already ramping up containment efforts including a squad of 50 two-person teams to ensure compliance with mask and social distancing rules.

Plans are also being made to set up virus testing locations around the city including at the downtown Cashman Center conference hall.

Clark County has seen a spike in virus cases during July, with county-wide total rising to 34,209 from 18,645 at the end of June. There have been 580 deaths in the county, accounting for most of Nevada’s 709 fatalities.

Nevada as a whole yesterday confirmed another 1,262 coronavirus cases, bringing the total to 39,919. 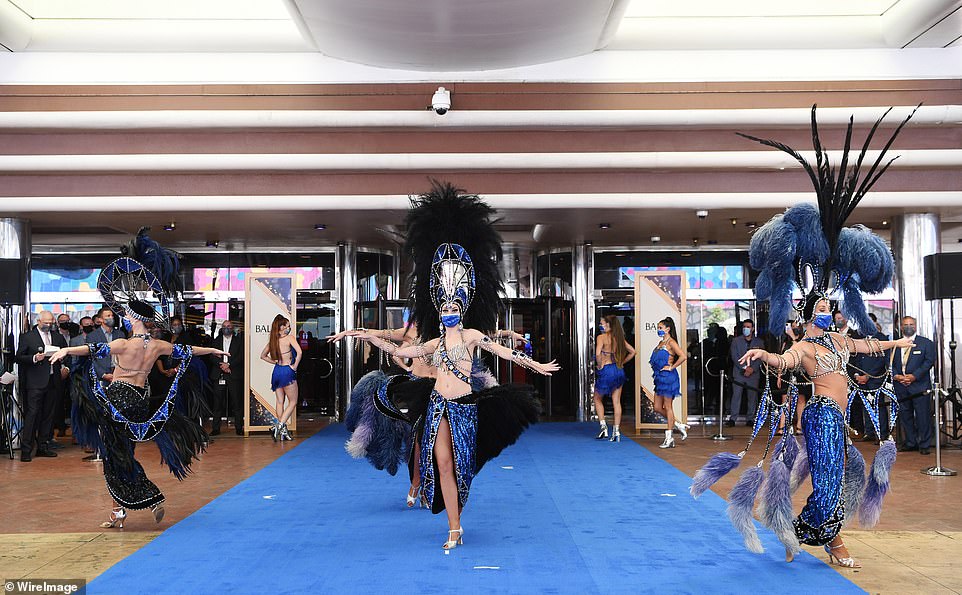 Performance: Some of the showgirls put on a display during the re-opening celebration at Bally’s 0on Wednesday while others head towards the entrance to the building 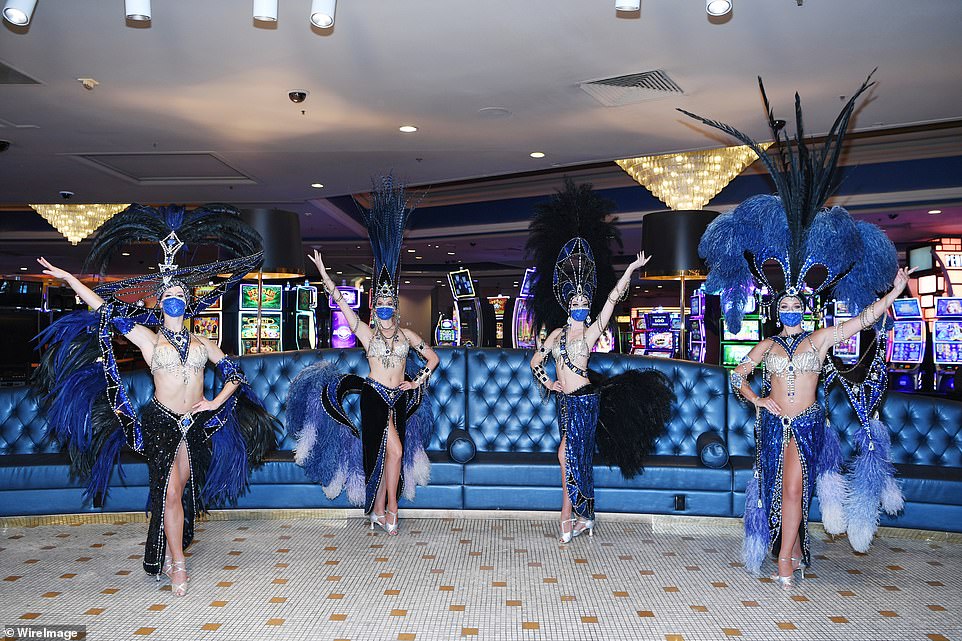 Pose: The showgirls in front of a couch at the Bally’s casino, where dealers have been told to hand out hand sanitizer and guests are banned from congregating around a table 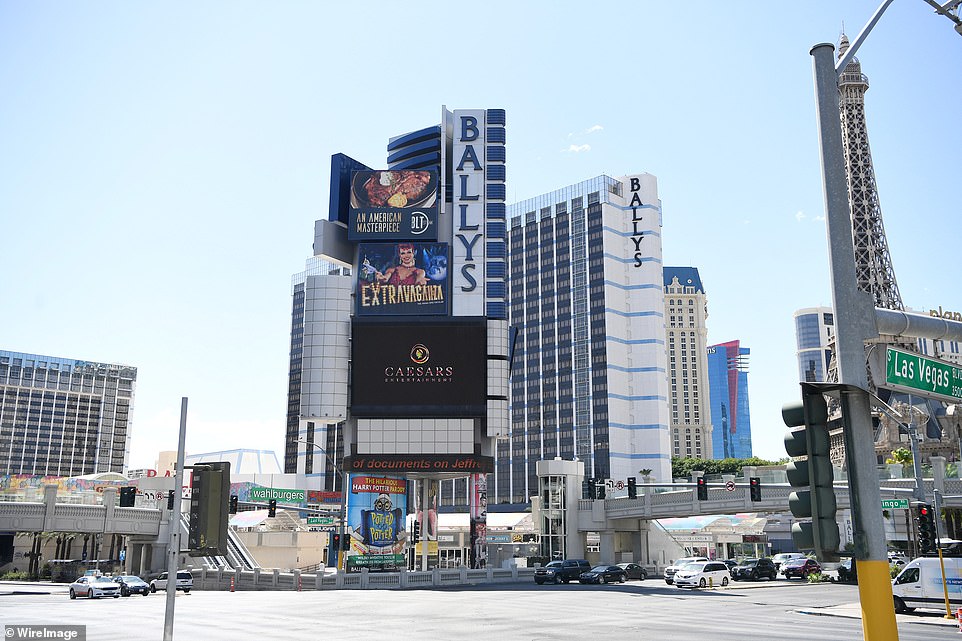 Surroundings: City officials in Vegas (where the Bally’s building is pictured) say they are already ramping up containment efforts including a squad of 50 two-person teams to ensure compliance with mask and social distancing rules