Vladimir Puck-tin! Russian strongman leader, 66, dons his skates for a game of ice hockey in his latest camera-friendly PR stunt

Russian leader Vladimir Putin put on his ice hockey gear and took to the rink in Moscow on Saturday in a festive game with politicians and sports stars.

The country’s President, 66, put on a helmet, shoulder pads and skates and brandished a hockey stick for a friendly game in Red Square.

Putin took practice shots and jostled for possession with Russia’s defence minister and former stars of the NHL in North America.

Politicians and hockey stars mingled at an outdoor rink with a view of the Kremlin behind it, in Putin’s latest camera-friendly PR stunt.

Keeping warm: Vladimir Putin wraps up ahead of the Night Hockey League exhibition game in Moscow in which he took to the rink along with politicians and sports stars 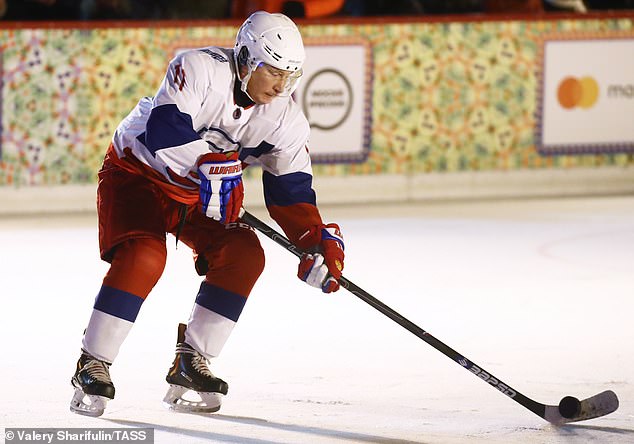 Eye on the ball: The 66-year-old Russian President controls the puck with his hockey stick during the friendly game in Moscow’s Red Square on Saturday 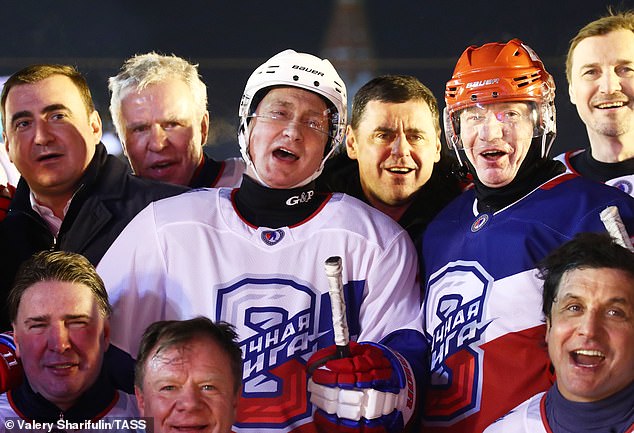 Team photo: Putin, wearing a helmet and gloves, poses for a picture with players in the hockey game including regional governors Alexei Dyumin (left) and Dmitry Mironov (third right) 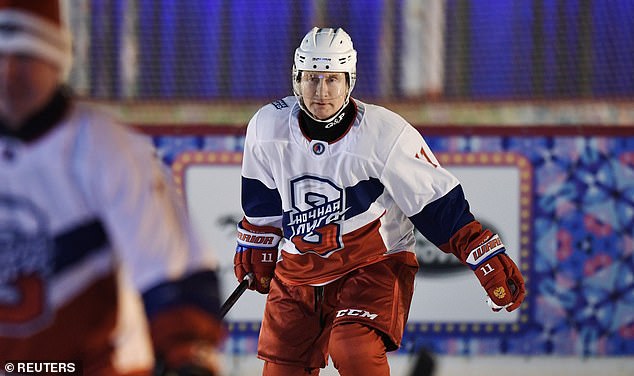 In action: Putin in full ice hockey gear during the match in Moscow’s Red Square on Saturday which saw former NHL stars of North America line up alongside politicians

With temperatures below freezing in Moscow Putin was seen wrapping up in a green blanket before the game got underway.

According to pro-Putin state broadcaster RT, the President has often taken part in Night Hockey League friendlies in Russia.

Earlier this year he scored five goals for a ‘Legends of Hockey’ team in a game broadcast on state TV.

Putin, a former KGB agent, was a keen judo competitor as a young man and won a black belt.

He is known for showing off his physical prowess in a range of disciplines, once riding a horse shirtless in southern Siberia.

On another occasion he purportedly shot a tiger with a tranquiliser dart to save a television crew from the animal.

He has also been seen fishing, swimming in a lake and playing a game of tenpin bowling against former President Dmitry Medvedev. 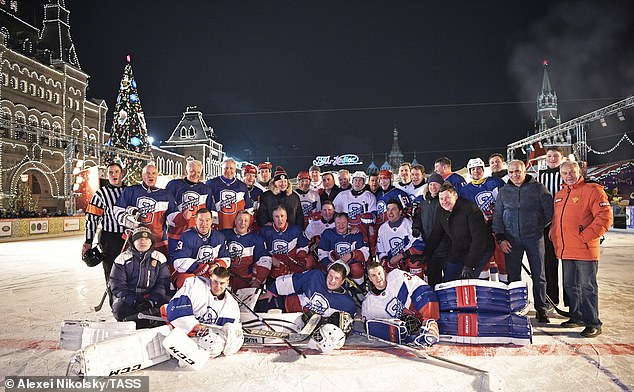 Scenic: Putin, pictured in the back row, poses with professional players, politicians and businessmen after the game at an ice rink in Red Square near the Kremlin 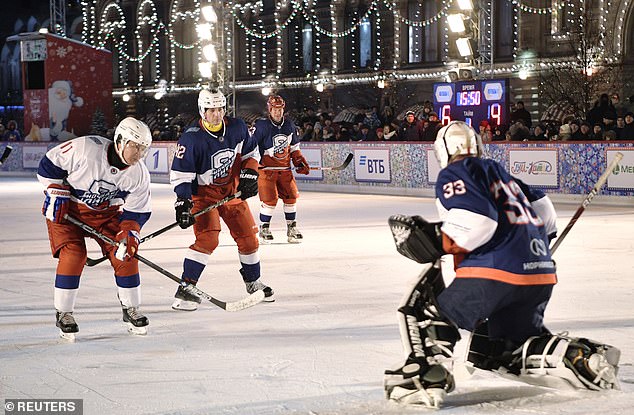 Shoot! Putin prepares to take aim at goal during the exhibition game in Moscow as spectators watch on from the sidelines and wrap up warmly amid freezing temperatures in Russia 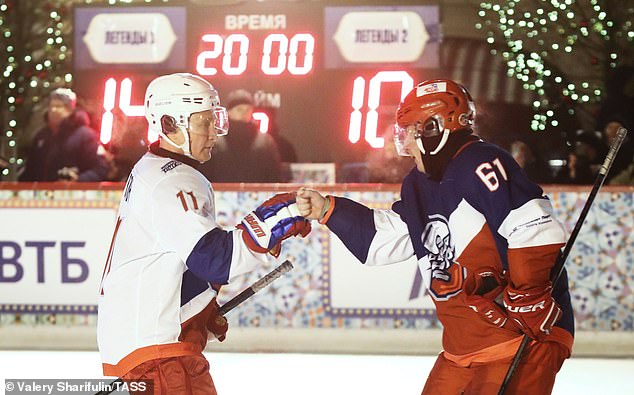 President of Russia Vladimir Putin bumps fists with Vladimir Potanin, the head of mining company Nornickel, with the scoreboard in the background during the hockey game 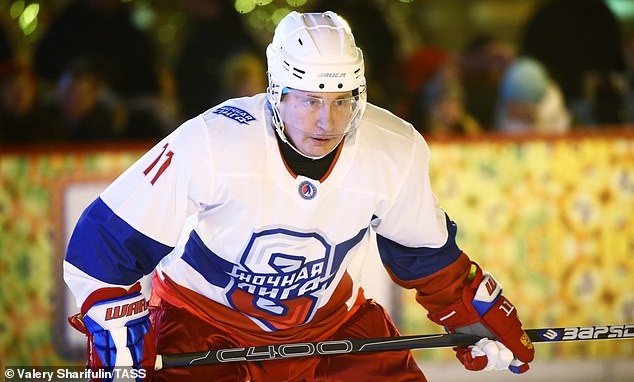 Concentration: Putin carries his hockey stick during the friendly game in Moscow this evening 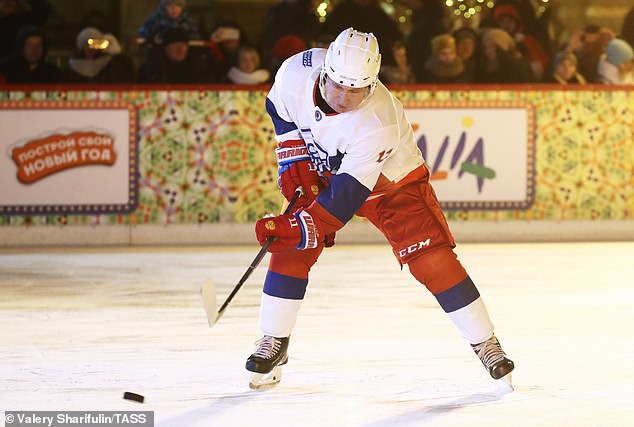 Clean contact: The Russian President, who has shown off his skills at a number of sports – most notably judo – strikes the puck during Saturday’s exhibition ice hockey game 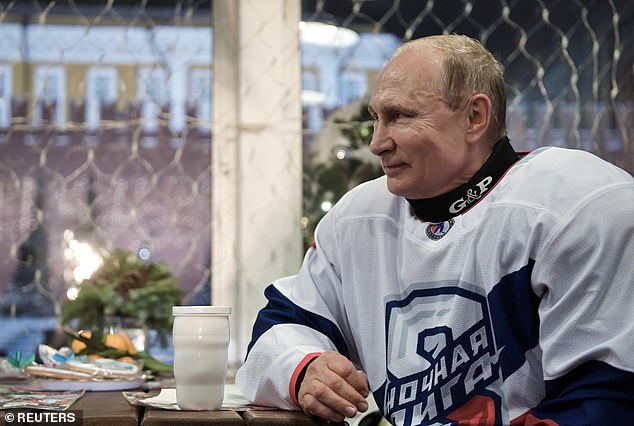 Warm down: Putin relaxes after taking off his helmet following the friendly game in Moscow