Vladimir Putin went skiing with the President of Belarus today as the Kremlin strongman met the ‘last dictator in Europe’ on a Russian slope.

Putin and Alexander Lukashenko headed down the hillside in Krasnaya Polyana near the Black Sea resort of Sochi, where Russia hosted the 2014 Winter Olympics.

The Russian leader, 66, stood out from the crowd in a bright red ski jacket, along with a helmet, goggles and white gloves as he joined Lukashenko and his so on the slopes.

Lukashenko arrived on Wednesday for three days of talks with Putin – their third meeting since December 25 – as they discuss closer ‘integration’ of their ex-Soviet countries, discussions which have sparked talk of unification.

It is the latest in a long line of stunts to show off Putin’s purported physical prowess, following the Russian President’s efforts at ice hockey, judo and horse riding. 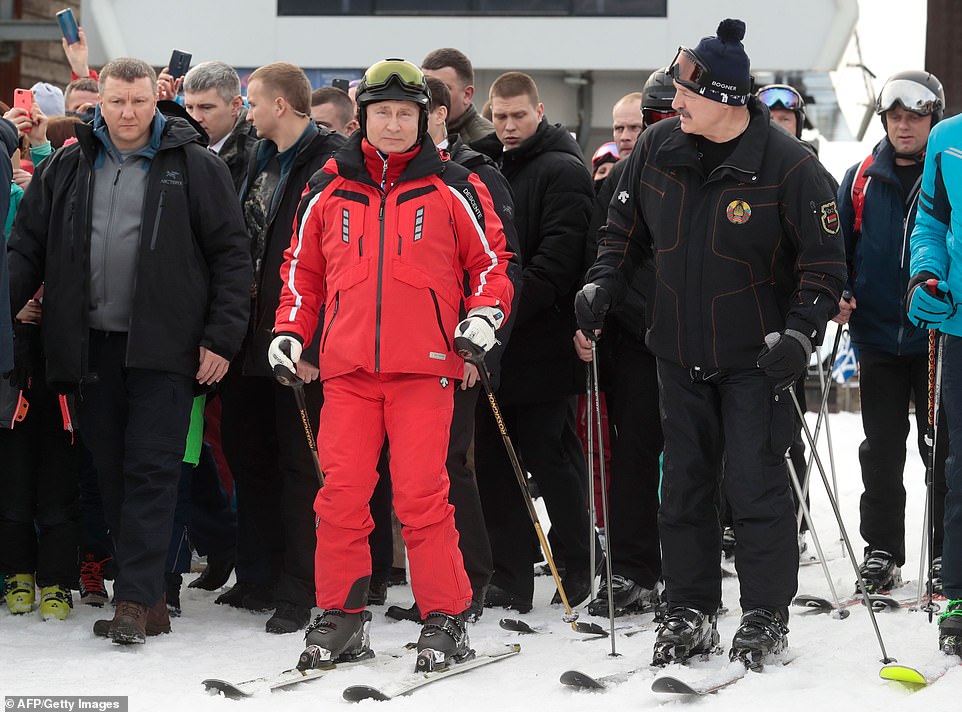 Dressed for the occasion: Putin stands out from the crowd in an all-red ski outfit while Lukashenko wears all black, as the leaders of Russia and Belarus meet for talks in the Black Sea resort of Sochi 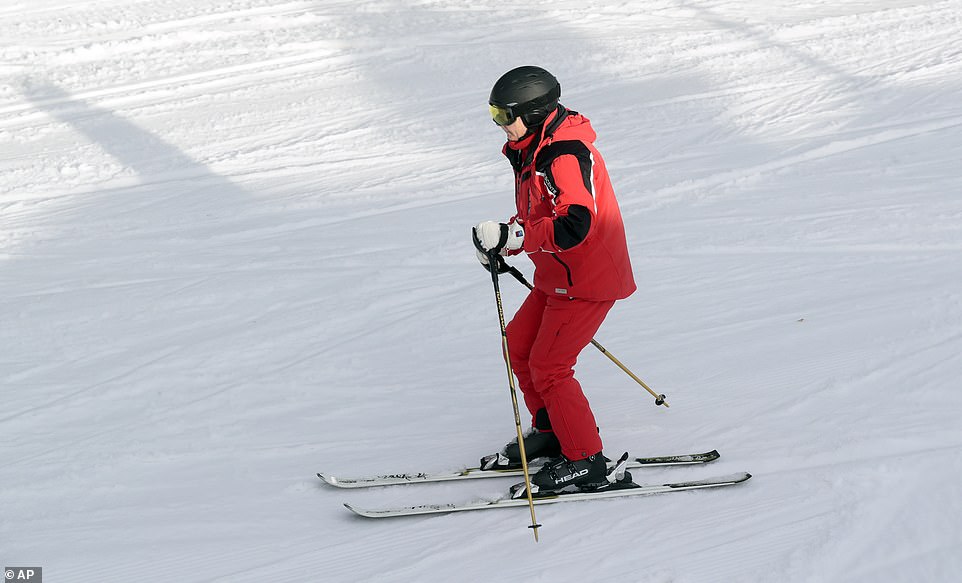 All downhill from here: Putin keeps his eyes on the slope ahead of him as he skis down the hillside in Krasnaya Polyana, near the Black Sea resort of Sochi, southern Russia 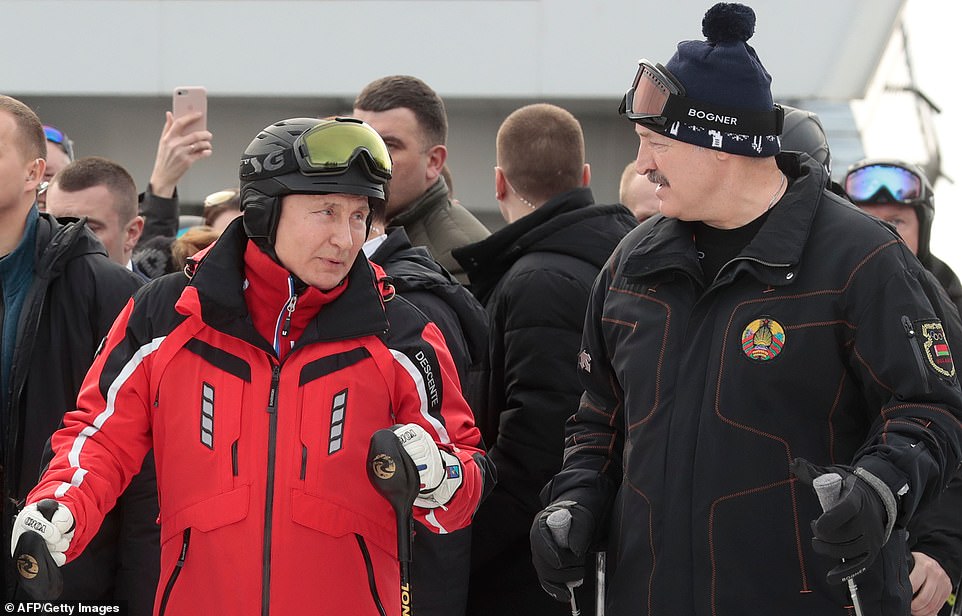 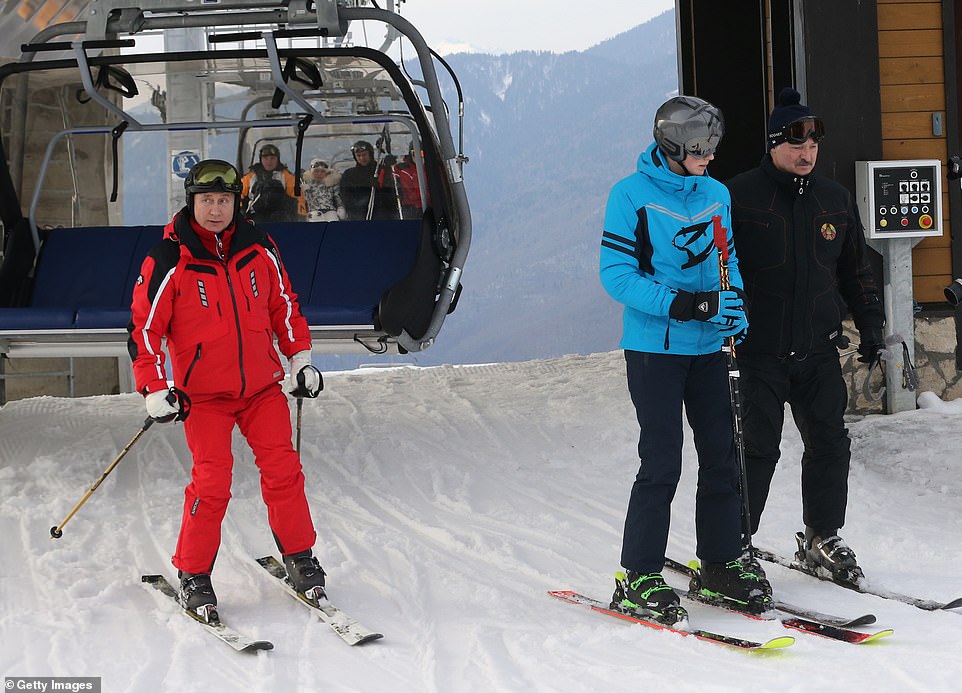 Three of us: Putin joins Belarussian leader Alexander Lukashenko (right) and son Nikolay Lukashenko (in the blue ski jacket) next to the ski lift at the resort in southern Russia 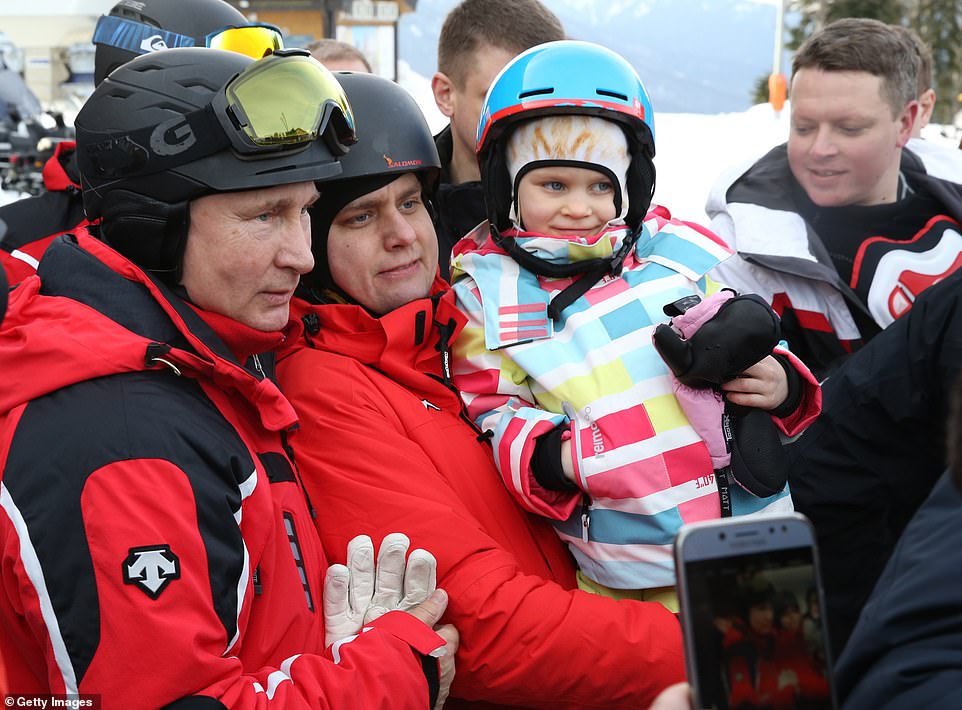 Popular: Putin takes one of his gloves off as he poses for a picture with another skier and their child 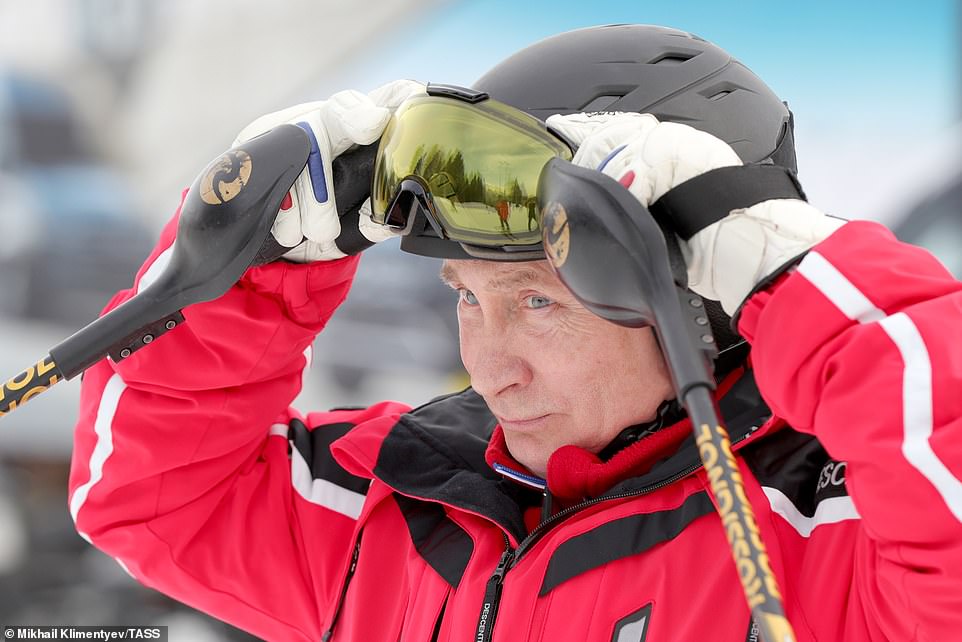 Straightening things out: Putin adjusts his visor and helmet as he prepares to ski down the slopes during the visit of his counterpart from Belarus, Alexander Lukashenko 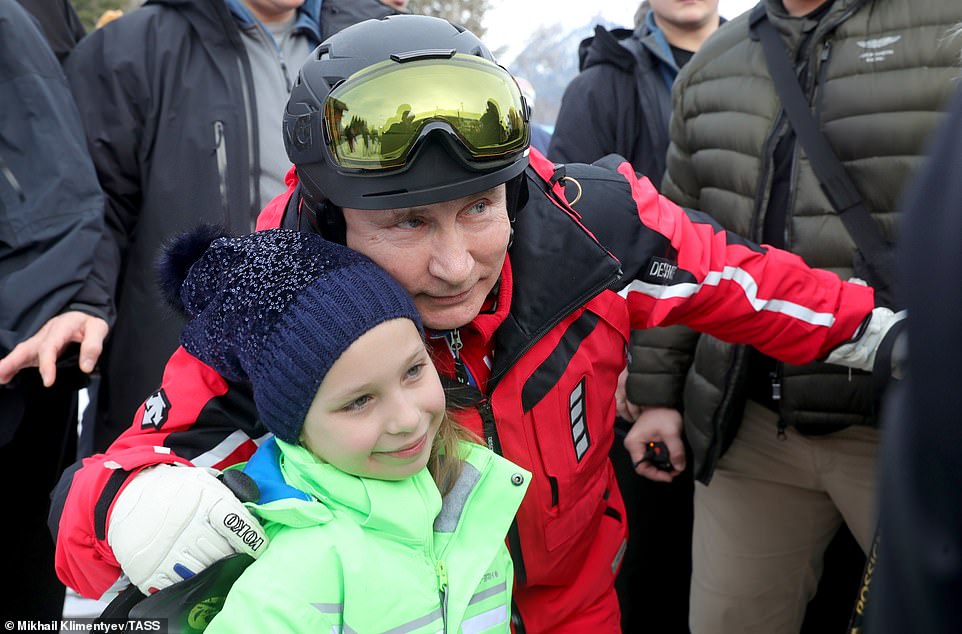 Poser: Putin has his ski goggles up as he poses for a picture with a little girl in a green jacket during his visit to the resort 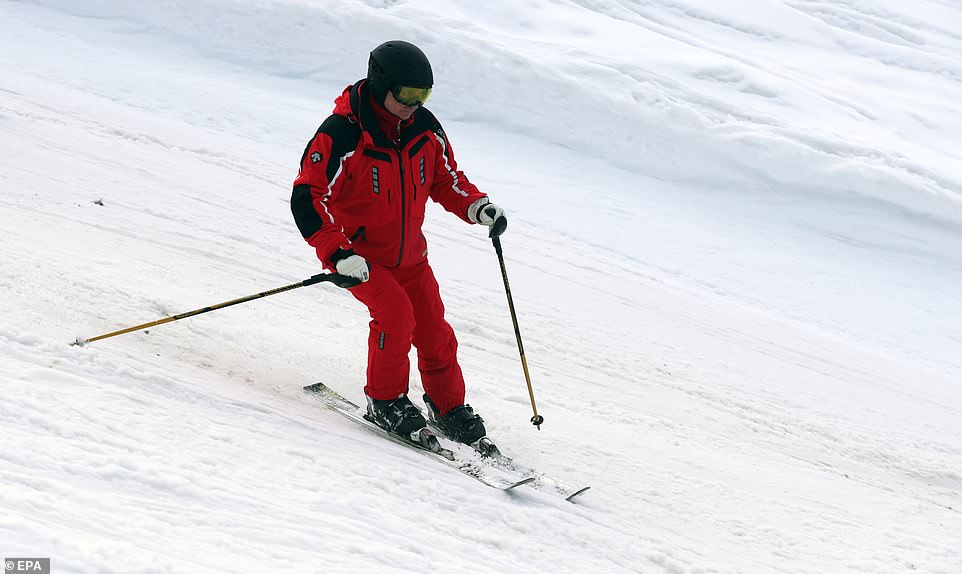 Downward: The Russian leader takes a sharp slope on the mountains as he hosts Lukashenko near Sochi. He will also meet the leaders of Turkey and Iran at a summit in the city tomorrow 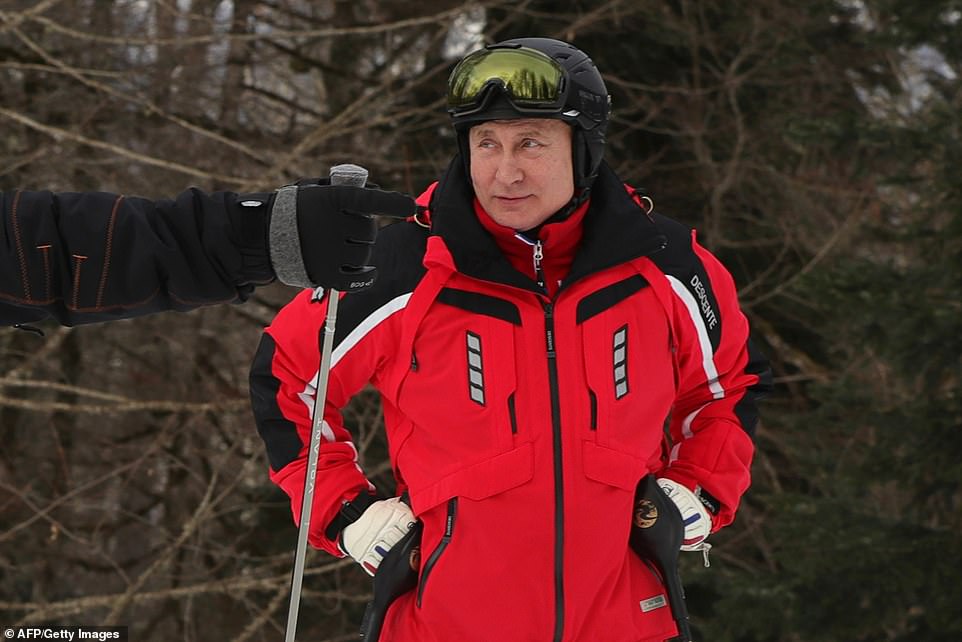 Here you go: A ski pole is held out in front of the Russian leader as he and Lukashenko take to the slopes of Sochi during their summit on Wednesday

Lukashenko, who has run Belarus since 1994, dressed in all black with a blue bobble hat underneath his ski goggles.

He has been termed Europe’s ‘last dictator’ after the fall of Communism, winning five elections which the West has labelled unfair.

Belarus is the only country in Europe which still carries out the death penalty, in spite of EU lobbying to eliminate it.

As the leaders met Lukashenko said that ‘Belarus-Russia relations are inviolable’, saying that ‘Belarus’ economy is the finishing assembly shop of the Russian economy’.

The President of Turkey, Recep Tayyip Erdogan, and Iranian leader Hassan Rouhani are set to join Putin for a summit in Sochi tomorrow.

Last year Putin, who was previously seen skiing in the build-up to the 2014 Games, scored five goals for a ‘Legends of Hockey’ team in a game broadcast on state TV.

Putin, a former KGB agent, was a keen judo competitor as a young man and won a black belt. He is known for showing off his physical prowess in a range of disciplines, once riding a horse shirtless in southern Siberia.

On another occasion Putin, who first became President in 2000, purportedly shot a tiger with a tranquiliser dart to save a television crew from the animal.

He has also been seen fishing, swimming in a lake and playing a game of tenpin bowling against former President Dmitry Medvedev. 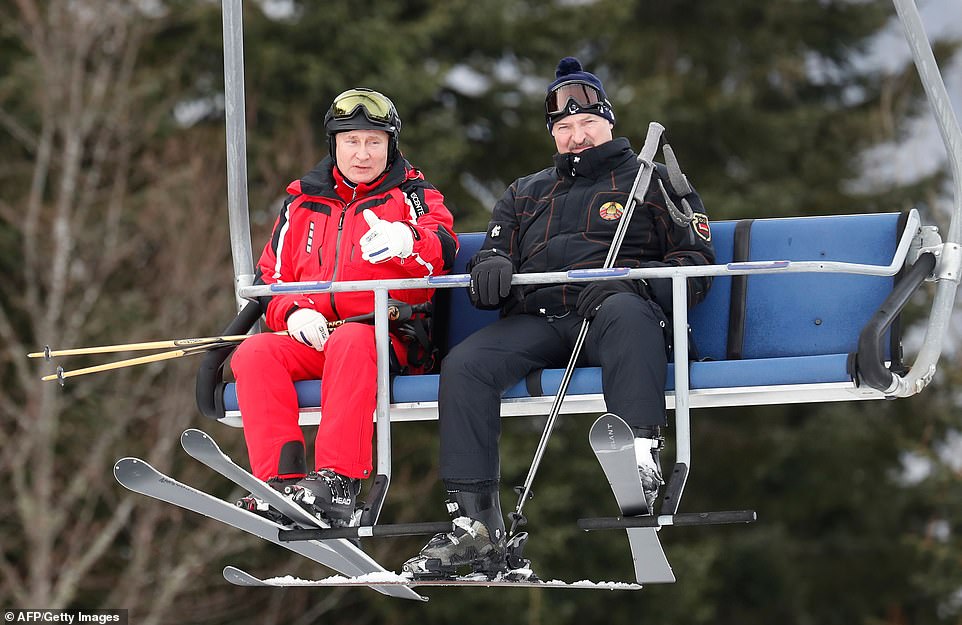 Thumbs up: Putin gestures to people down below while Lukashenko smiles at the camera as the two sit in a ski chair lift 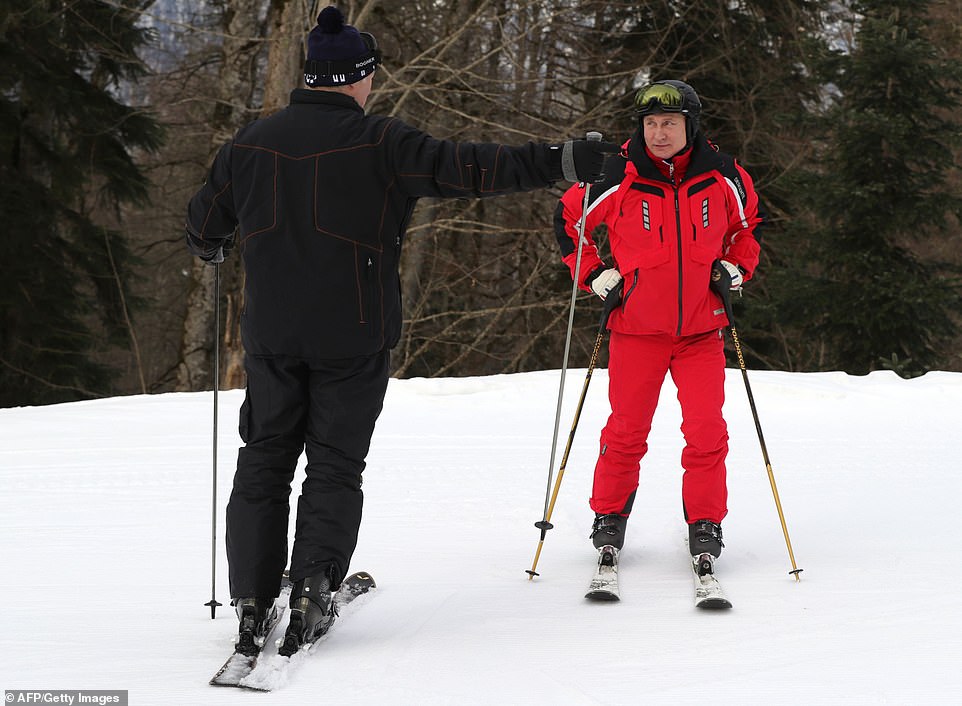 Point the way: Lukashenko holds out his ski pole as he and Putin enjoy skiing at the Gazprom Mountain Resort near Sochi 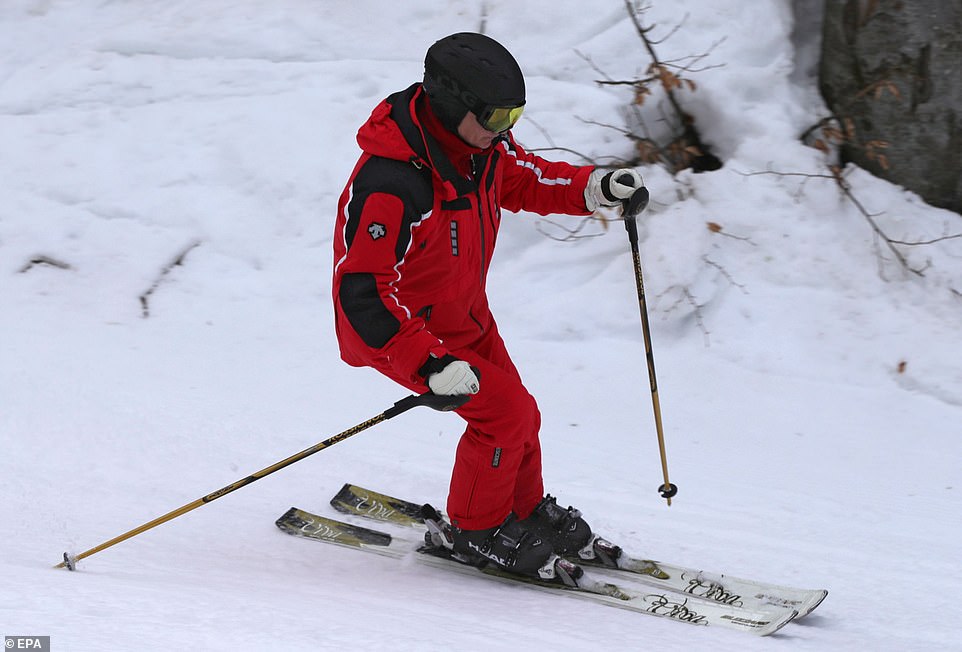 Turning a corner: The Russian President, who was re-elected last March, leans to one side on the snowy slopes near Sochi 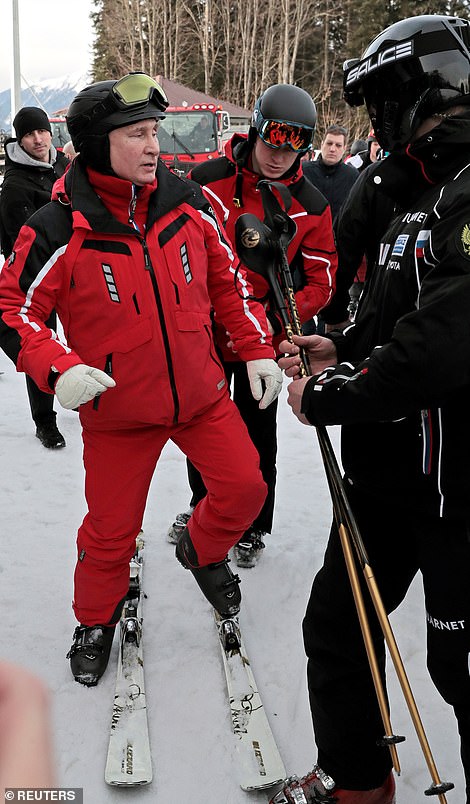 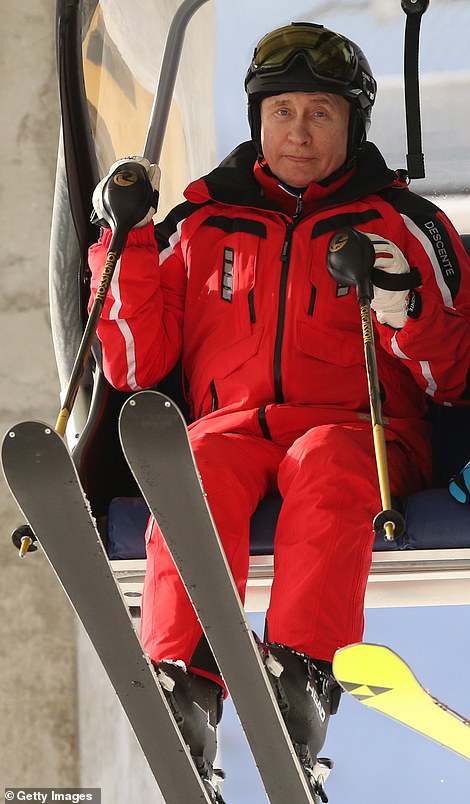 Red in Russia: Vladimir Putin removes his skis at the end of his latest physical test (left) and sits on the lift as it heads up (right) 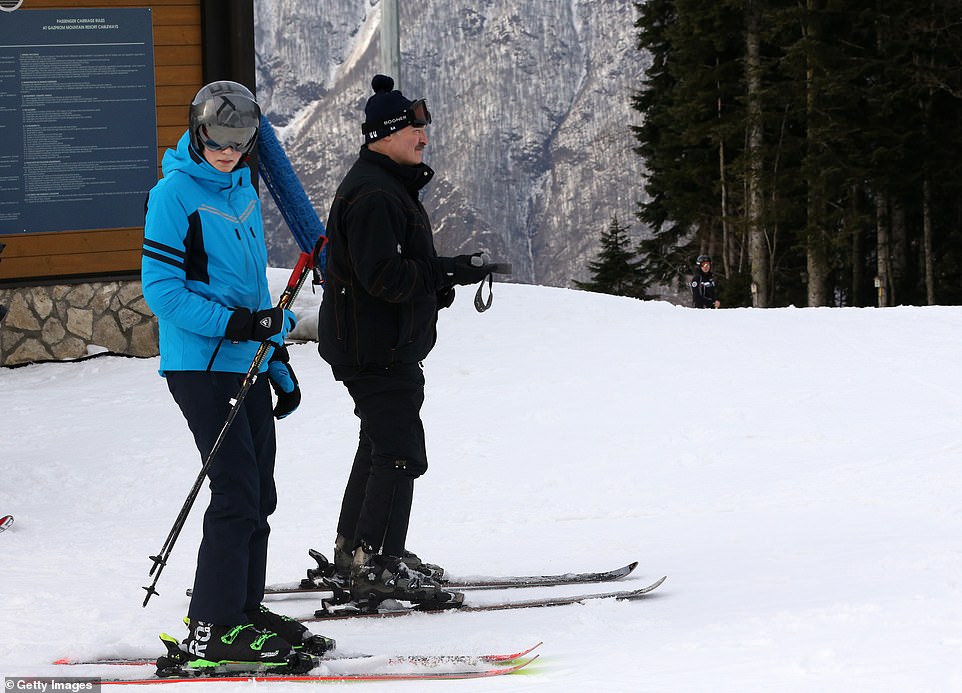 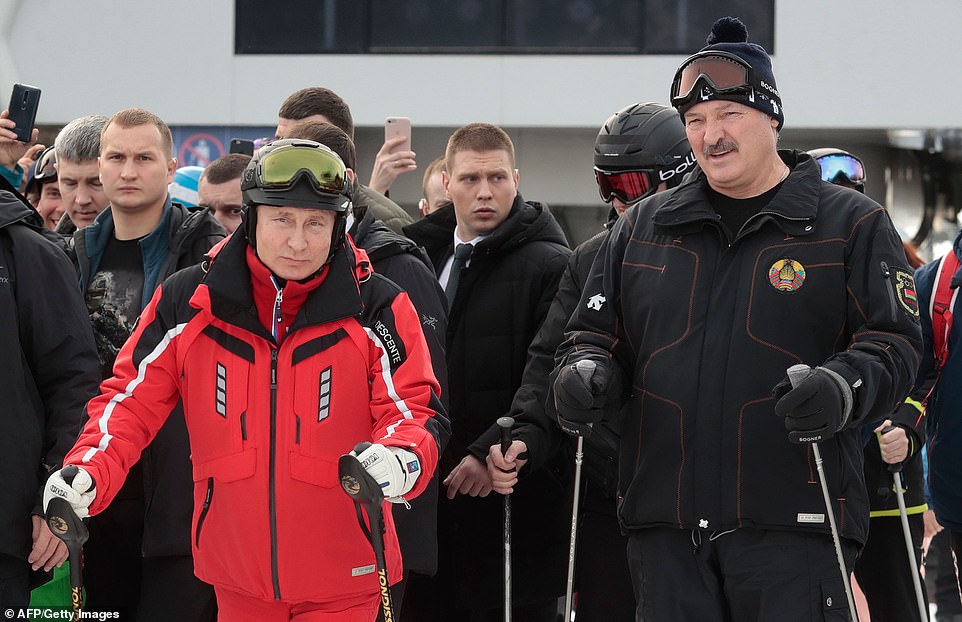 Leading the pack: Putin and Lukashenko at the front of a crowd of people, some of whom are taking pictures with their phones

Speculation has been swirling in recent months that Moscow is pressuring Belarus into closer integration with a view to establishing a unified state – and possibly extending Putin’s stay in power at its helm.

In remarks released to the media, the two leaders sought to praise their nations’ tight ties and dismiss reports of recent tensions.

In December, Russian Prime Minister Dmitry Medvedev said Moscow was ready for closer integration with Belarus – including a common currency, shared customs services and courts – in line with a 1999 agreement to create a ‘union state.’

Putin’s spokesman Dmitry Peskov has dismissed suggestions the Kremlin was looking for a way to prolong Putin’s time in power when his fourth presidential term ends in 2024 by making him the head of a new, ‘unified’ state.

The outspoken Belarussian leader has been more blunt, saying last month unification ‘was not on the agenda.’ 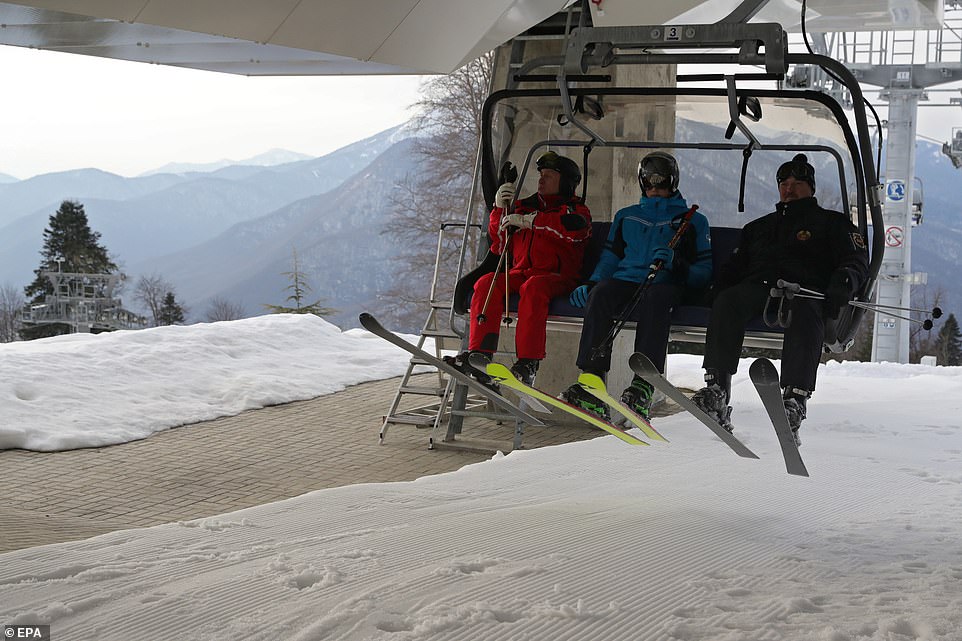 On their way: Putin (left), Belarussian leader Alexander Lukashenko (right) and his son Nikolay (centre) head up to the slopes 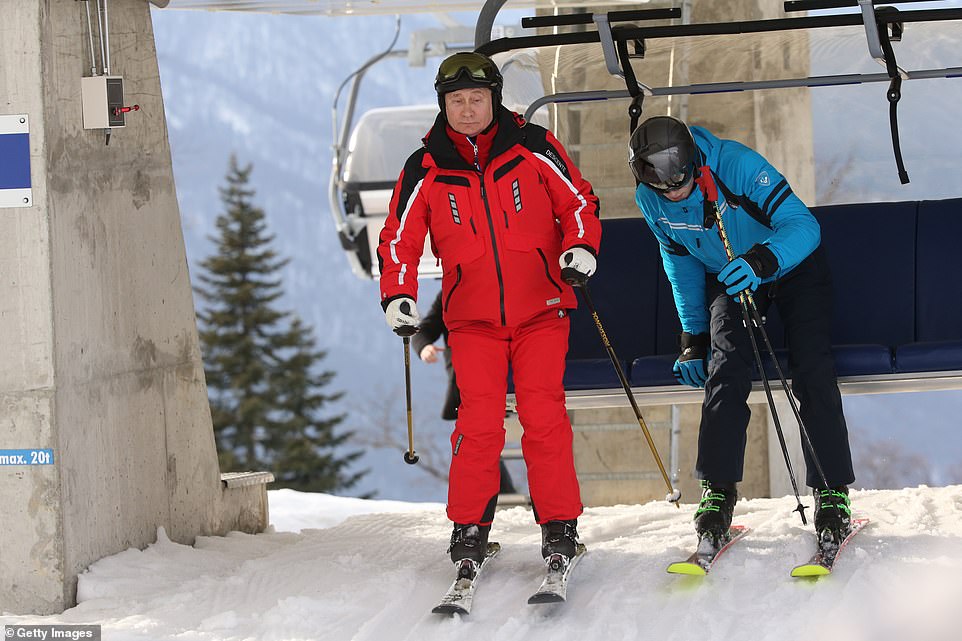 Here we go: Nikolay Lukashenko, the son of the Belarussian President, follows Vladimir Putin out of the ski lift near Sochi 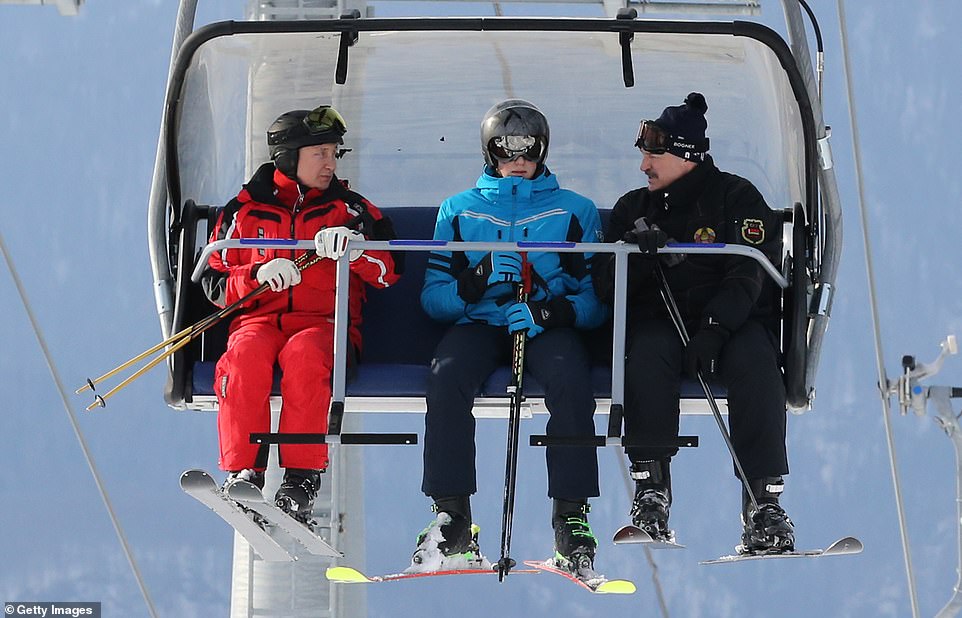 Three in a lift: Alexander Lukashenko (right) speaks to his son as they sit with Vladimir Putin in the ski lift near Sochi 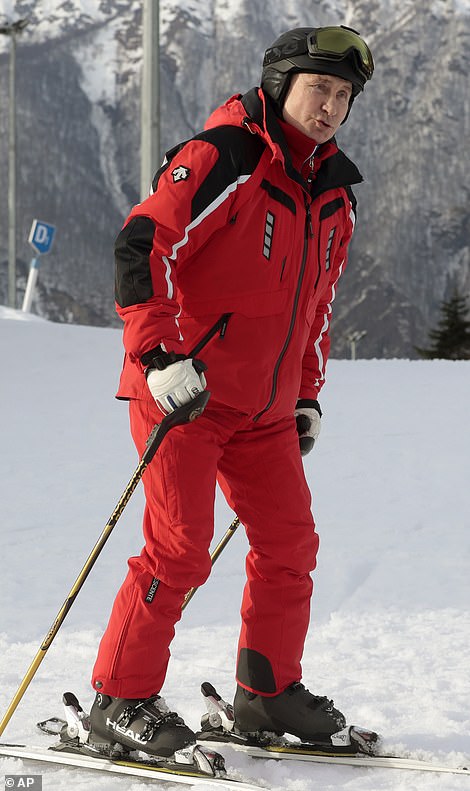 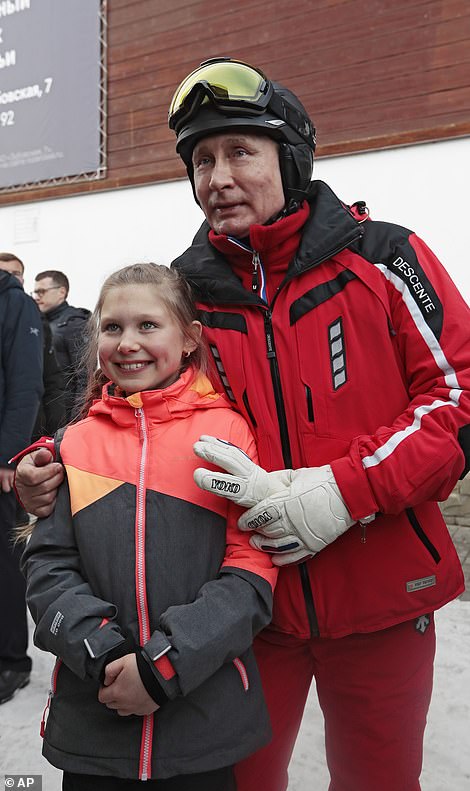 Man of the people: Putin speaks after skiing down the slope (left) and poses for a picture with a young girl (right) at the resort 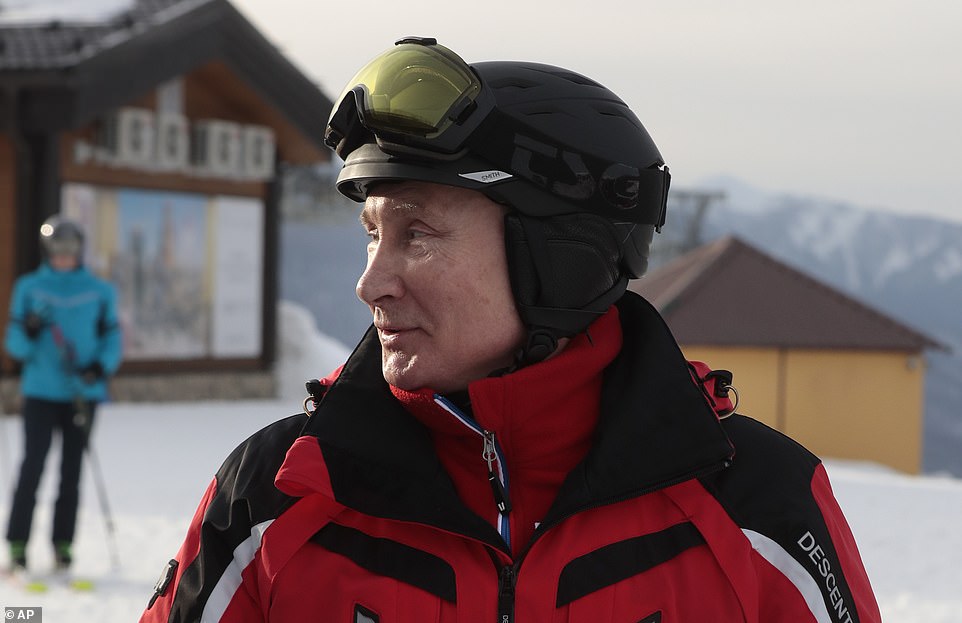 Cheerful: The Russian President smiles after skiing down the slope, with the Belarus leader’s son Nikolay Lukashenko in a blue jacket in the background 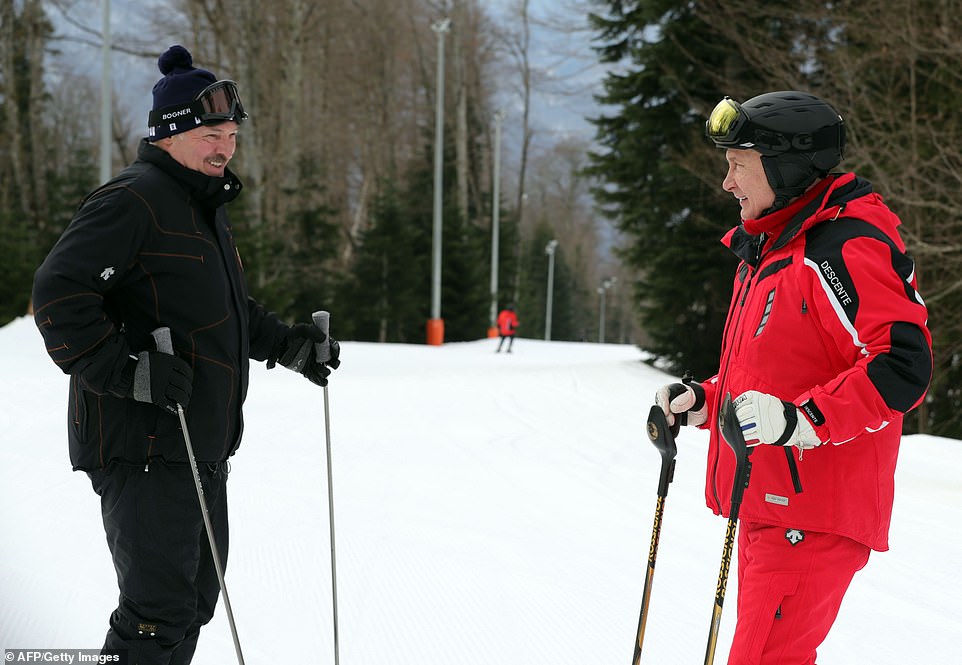 Me and you: The Russian leader and his counterpart in Belarus – dubbed Europe’s last dictator’ – smile on the slopes 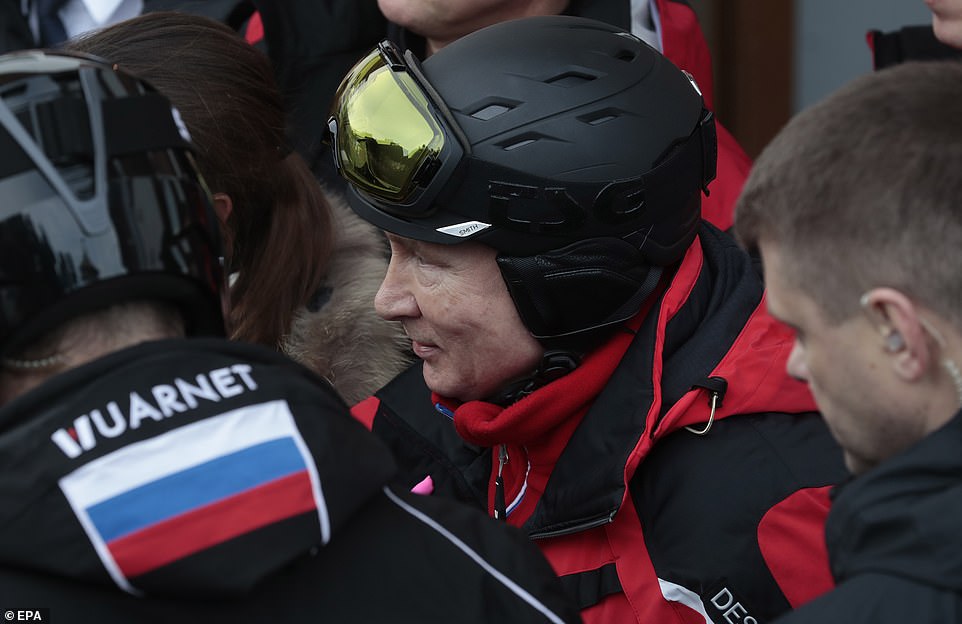 Huddle: Putin among a crowd of people with his ski goggles up and his red ski jacket on at the mountain resort in Russia 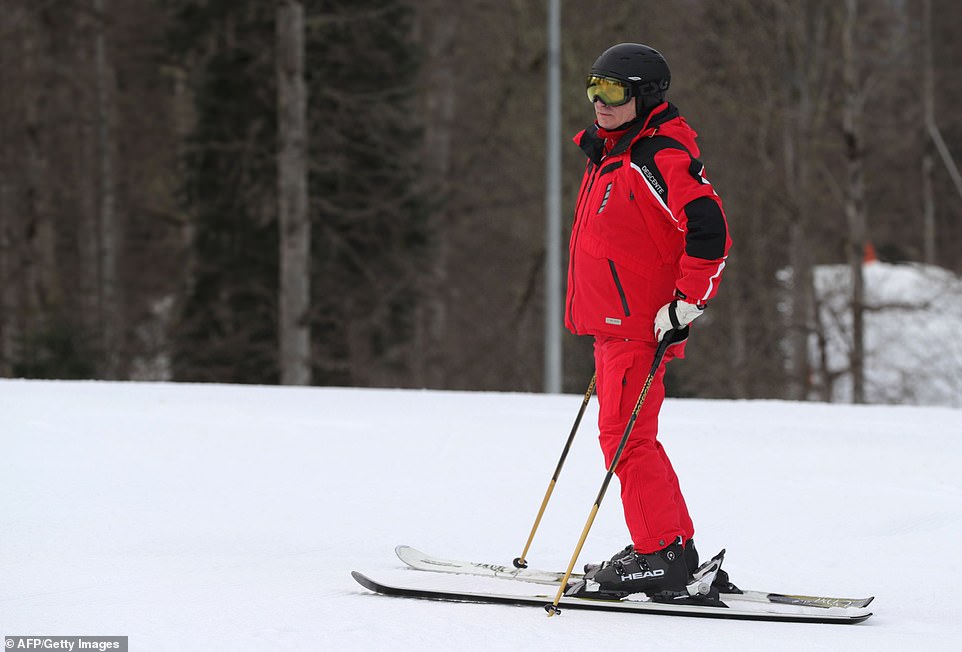 Host: The Russian leader, 66, with his goggles down as he skis at the resort close to where his country held the Winter Games