Vlogger, 19, tricked millions into believing he was going on Love Island

Callum Ryan, 19, created a series of photos and videos on the video-sharing app TikTok which made it seem as though he was poised to enter the Love Island villa

A teenage vlogger duped millions into believing he was a contestant on the new series of Love Island – to prove a point about the dangers of social media.

Callum Ryan, 19, created a series of photos and videos on the video-sharing app TikTok which made it seem as though he was poised to enter the Love Island villa.

The posts, often featuring badly-edited images touring a ‘behind the scenes’ look at the villa, gained more than three-and-half million hits – with thousands of people weighing in with disbelief, praise and hatred.

By the time the latest series of Love Island kicked off, Callum had more followers across TikTok and Instagram than any of real contestants – all of which he’d picked up while sitting at home in Milton Keynes.

But the canny teen had spent weeks planning the stunt – and just as the official housemates were revealed for the new series, Callum posted a poignant video pointing out how dangerous social media can be, and how it often leads to cyberbullying.

Callum, who works in media production, has been on the receiving end of a substantial amount of online abuse since he started vlogging, aged 14.

The level of cyber-bullying increased after he appeared on Channel 5’s Rich Kids Go Skint in 2018 – in which he confessed to spending up to £1,000 on a single pair of trainers.

Callum said: ‘The level of abuse got out of hand. I have kind of experienced it before, after I was on TV, and I knew it was coming – so I knew what to expect.

‘But the hate that I got only went to show that the point I was proving was right. People who posted the hate are only going to come back and realise what they did wrong.’ 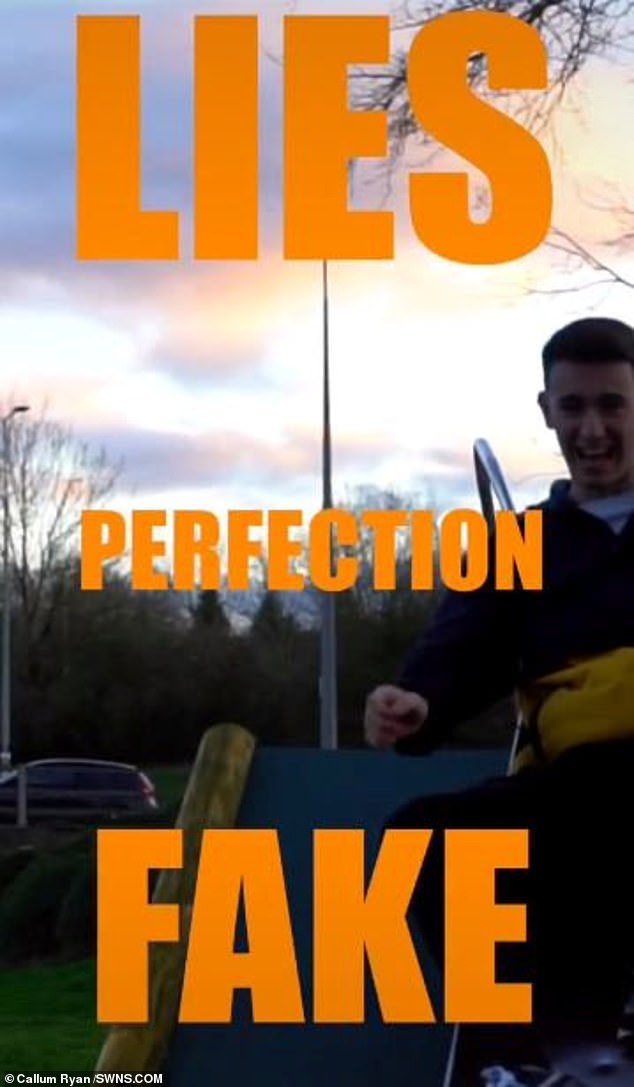 By the time the latest series of Love Island kicked off, Callum had more followers across TikTok and Instagram than any of real contestants – all of which he’d picked up while sitting at home in Milton Keynes

Minutes before the series opener of Love Island aired, Callum posted another TikTok video confessing to his prank, warning against the dangers of online bullying and social media hatred.

The idea of duping his followers into thinking he was going on the ITV2 reality show came from a friend, who had undergone a similar campaign of deception to convince people he was on vacation.

Callum said: ‘A friend pretended to go on holiday to Europe a while ago, and I thought that I could use that idea – of creating something fake – in a positive way.

‘It was in the planning for a couple of weeks. When it came out that there was someone else called Callum going into the villa, that was it.

‘With a bit more planning, I had an idea to make it seem like I would be the second ‘bombshell’ Callum to enter the villa after the series had started.

‘The one thing I wanted to do was that there was no serious forgery going on, that nobody was impersonating anyone or stuff like that.’

The response from the public was instant – with a lot of it taking the form of abuse.

The vlogger said: ‘There was a man on TikTok with over six million followers who said that I wasn’t big enough, body-wise, to go on Love Island. People on that level don’t understand the damage that they can do.

‘He said, ‘You don’t look big enough to go on Love Island mate’. I could have had anxiety about my body shape for all he knew.

‘But since that last video, people have been really supportive. Messages like ‘huge respect’, ‘using the platform in the right way’, ‘top geezer’ – stuff like that.

While a stint in the Love Island villa doesn’t appear imminent, moving forward Callum, from Milton Keynes, Bucks., wants to continue raising awareness for the danger that online abuse poses.

He added: ‘The feedback I’m getting from the final video has been amazing. I think that people are really getting the right message out of it.

‘I really want to keep banging the drum about cyber-bullying going forward.’