Vlogger reveals how she tried to conceal binge eating

A vlogger who used to weigh 300 pounds has revealed the ’embarrassing sh*t’ she used to do to try and conceal her food consumption.

Jordan Murphy, 24, from Toronto, Canada, has lost 130 pounds since she embarked on a diet and fitness plan at the beginning on 2016.

However, before embracing a healthier lifestyle, Jordan who vlogs under the name Jordan Shrinks, resorted to several desperate measures to conceal her food habits from friends and family.

Reveal: Jordan Murphy, 24, from Toronto, Canada who vlogs under the name Jordan Shrinks has revealed how she used to conceal her binge eating before losing 300 pounds (left) 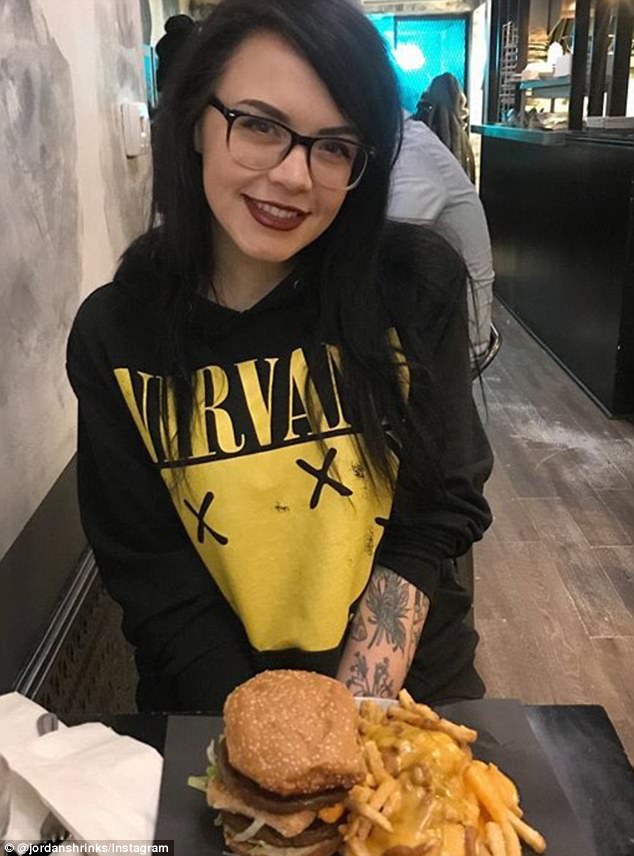 Sneaky: Jordan, pictured here in January 2018, used to try and conceal her food binges by pretending she was ordering for friends in fast food restaurants 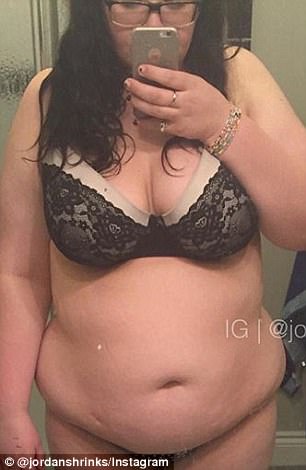 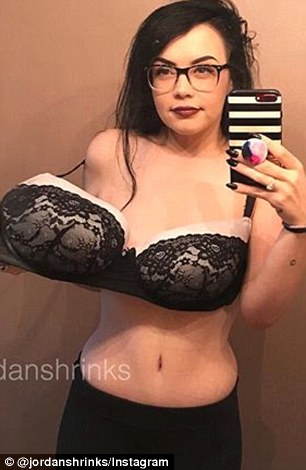 Transformation: Since embarking on a diet and fitness regime in January 2016, Jordan has transformed her body and her habits, left in 2015 and right in 2017 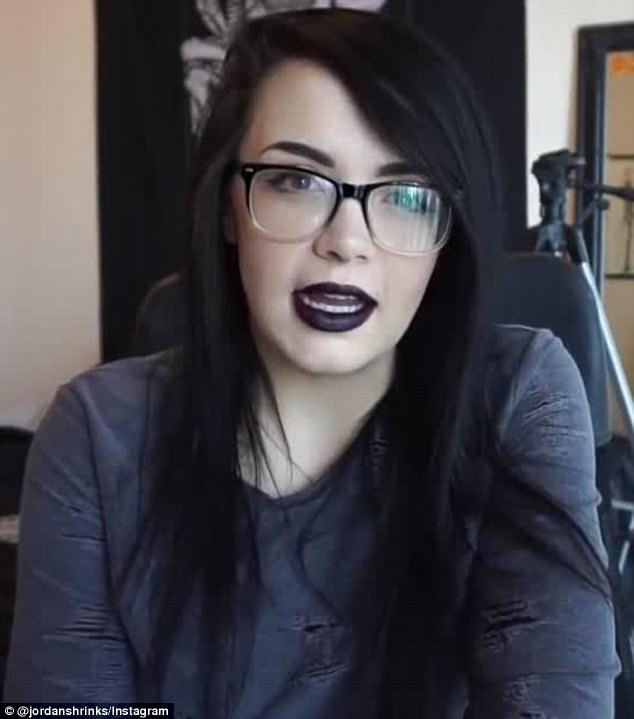 Secret: Jordan shared that throughout college she would pretend to eat smaller portions and then scoff extra portions in secret in her bedroom

‘But since I knew that it was not a normal amount of food for one person to eat, I would pretend I was on the phone and be like “hey what do you want?” and I would pretend I was talking to a friend ordering them food as well, so it would make it look like I was not going to eat all that food even though I was.’

Jordan also explained that she would also try and conceal how much food she was eating from her college roommates, even when she lived with her good friends in her third and fourth years.

‘Once again I was making way too much food for one person to eat. I could not get over the embarrassment of people knowing I was eating that much, even though it was very clear, based just on how I looked that I was over consuming food,’ she revealed.

‘When I lived with roommates and we were all cooking together, I could not cook my ginormous portions in peace so I would make my food, and then I would take that food and I put it in a Tupperware container.

She added: ‘Say I was making cheesy pasta, because that’s all I made, I would put my portions into three Tupperware [containers] and say this is lunch tomorrow, pretending I was meal prepping or something, and I would put that in the fridge.’

Admitting that she would then eat her ‘small portion, in front of my roommates’, once ‘the coast was clear’, she would go back to the fridge and take all the extra food she had made to her bedroom so she could eat it in bed alone. 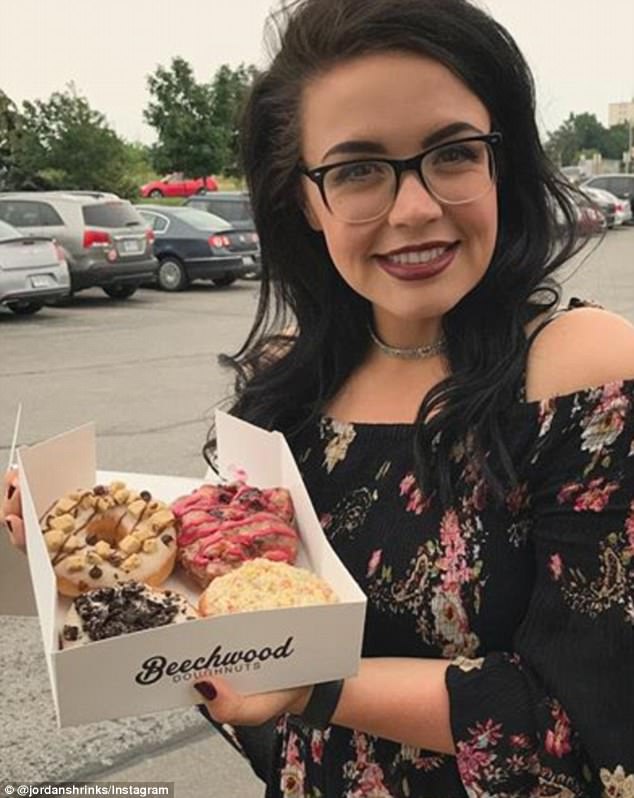 Sweet tooth: Jordan, pictured here in July 2017, once threw cookie wrappers off her balcony so her friend wouldn’t see them in her trash can 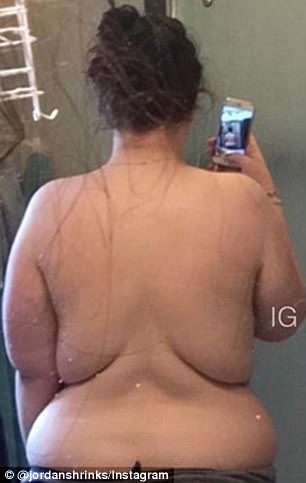 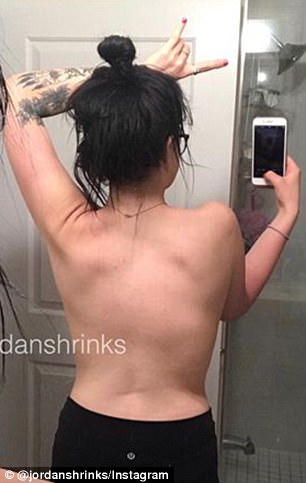 Alarm bells: Jordan, pictured at 275 pounds (left) to 175 pounds (right) used to set her alarm for early in the morning so she could eat leftover pizza before her brother could

‘I knew while I was putting the food in the Tupperware that I was going to eat that food later,’ she disclosed.

Jordan also shared how in her first year of university her eating got out of control because she could eat whatever she wanted.

A fan of sweets, she would eat cookies in secret in her room and when her friend expectantly said she was going to call over to her room one day, Jordan had to frantically get rid of all the wrappers and evidence of her latest cookie binge.

Because she didn’t have time to go to the garbage disposal, she ran to her balcony and threw her trash over the side.

She also shared how she also used to set her alarm when she was staying at home so she could eat pizza leftovers early in the morning, before her brother had a chance to.

However, not all of Jordan’s ’embarrassing’ habits had to do with food alone.

She also revealed how exercising, shopping, her education and even running for the bus were impacted by her weight.

‘When I was studying I would pick classes not based on what I was interested in or what I wanted to learn about, but where they were held because I knew I could not fit my butt into some of the lecture hall seats, so I knew I could not have class there,’ she explained.

‘You should not pick your classes based on whether or not you can sit in the seat.’ 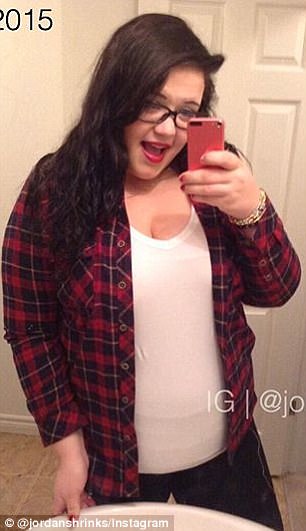 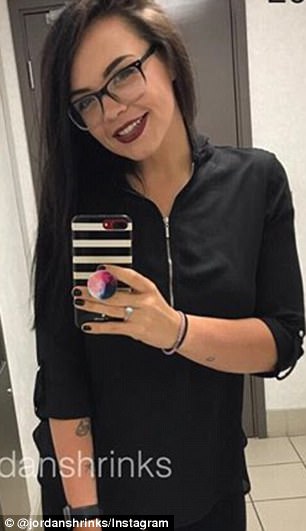 Learning curve: Jordan, pictured left in 2015 and right in 2017, skipped her undergrad graduation ceremony as she was worried she wouldn’t fit into the gown 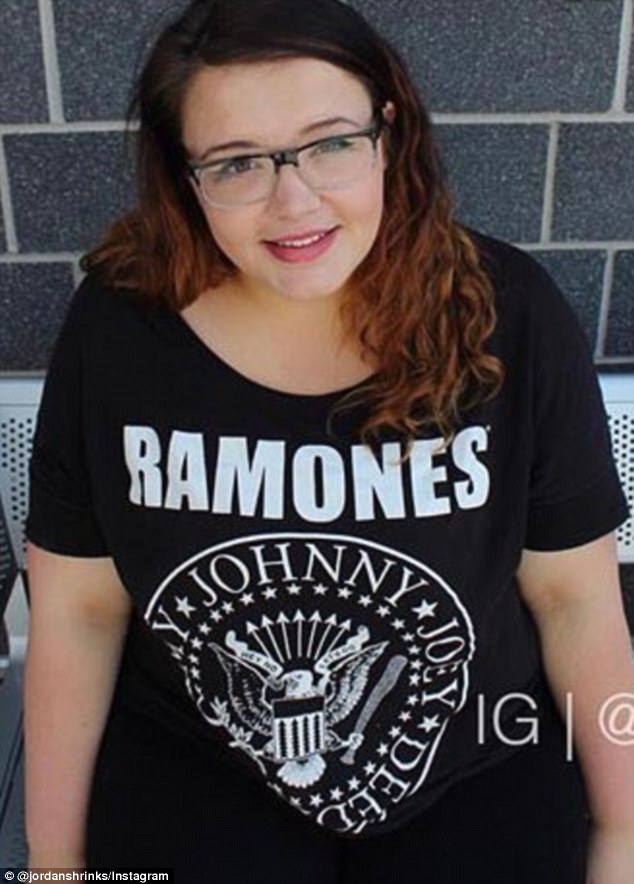 Plus size: Jordan didn’t want her friends to know she shopped at plus size stores 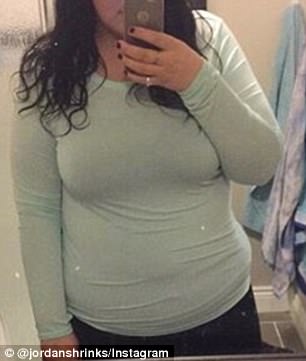 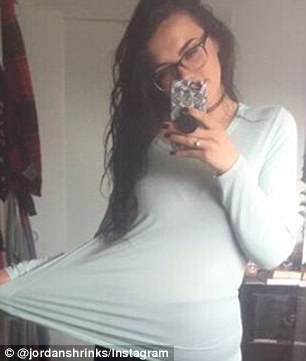 For the chop: Jordan also used to cut the tags out of her 3XL clothes so people wouldn’t know her size

And when it came to her undergrad graduation ceremony, Jordan skipped it entirely because she was worried she wouldn’t fit into the gown.

‘You work for four years, you get your ass on the Dean’s list and you don’t go to the graduation ceremony because you’re too tubby.’

Fitting into clothing in general posed lots of problems, and Jordan also exposed how she would cut the tags off her clothes because she didn’t want anyone to see she was a 3XL.

She also used to pretend she needed to use the bathroom on shopping trips so she could go to plus-size stores alone.

‘Did I think that by cutting it out, people would thing I was a medium?’ I was irrational,’ she added.

She also avoided exercising with her friends and shared she would claim she was sick if they asked her to join them in the gym.

‘I would make up excuses and I did nothing physical. In my mind I was being super sly but people were probably looking at me thinking she’s going to die soon.

‘I would literally act like I was on my death bed. Then when they were at the gym, I would order a pizza and then eat it in bed.’

The YouTuber also admitted she used to auto tune her photos to make her face look slimmer.