A Vodafone boss who shared a photo of himself dressed in a ‘See You Jimmy’ tartan hat with fake red hair and holding a bottle of Irn Bru, in advance of a meeting in Glasgow to announce job cuts, did not show up at talks with staff today.

The customer ­operations director was due to appear before the firm’s workforce in Glasgow to speak about 360 jobs which, according to proposals revealed last month, are set to move to Manchester.

However, a deputy was sent instead after the furious backlash, staff revealed.

Speaking on condition of anonymity, a female worker who saw Mr Shabbir’s post, spoke of staff feeling ‘in limbo’ – and said she would not uproot her family and move down south.

The woman said: ‘He’s not even come up today. He’s actually sent the lady below him who’s his deputy.

‘She’s here today, but not him. It was quite inconsiderate yesterday with that post.

‘We saw it on the company Facebook and loads of people commented on how inconsiderate it was. They deleted it in a matter of seconds.

‘They wanted us to move down south but you can’t just up root your family and move. I’ve been here for four years and some people have been here six months, but they’re getting the same redundancy package.

‘You get two months back pay regardless if you’ve been here four or five years or six months – it’s about £3,125.

‘It’s good for the people who only started six months ago but not me.

However, the staff were told they made have to wait until July to hear their personal fate.

In the post a grinning Shabbir is pictured with the caption: ‘Getting ready for this month’s ‘Audience with Antonio’… some exciting news to share.’

The Daily Record reported that staff saw the post from their desks on Workspace, an internal work platform used by Vodafone employees, but it was later deleted after causing an uproar.

Last month it was revealed 360 jobs at ­Vodafone offices in Glasgow would be ­relocated to Manchester in March. Employees are understood to have been told they had until yesterday to volunteer to move south.

Affected employees are believed to have been given 60 days to accept the move or lose their job.

One furious Vodafone worker said: ‘The whole thing is ridiculous. In work, everyone is so nervous. There’s a real anxiety about the place. People’s ­livelihoods are at stake.

‘Some will have to wait until July to find out if they have a permanent job. To then see this photo is horrible.’

A father-of-five who walked out of the Berkeley Street offices, said Mr Shabbir’s post was ‘distasteful’.

He had worked for the communications company for four years but said he has got a new job rather than taking redundancy.

The man said: ‘I was the first to comment. I just said it’s a bit distasteful when our office in Scotland is getting taken down south.

‘I think the context was ‘win a trip to Edinburgh’ – I know none of us were invited.

‘Forgotten about was the sentiment around it, the day right before other people lose their jobs.’

He described Vodafone’s apology for Mr Shabbir’s post as ‘standard’.

The dad said: ‘I’ve got five kids so I decided I just want a wage.

‘I don’t want to risk 200 other people looking for a job at the same time in June, July or whenever.

‘The way I look at it the longer I go it will be harder looking for a job.

‘I’m OK now, that’s me been here four years – from the start.

‘But I’m obviously not important enough to be put on gardening leave.’

Mr Shabbir has worked for ­Vodafone for more than seven years and has been the customer operations director for two years and five months, according to his LinkedIn profile. He has previously held top jobs in mobile phone firms EE and T-Mobile.

Staff responded by replying to the post on the intranet, with one saying: ‘A bit distasteful when our office in Scotland is being taken down south and we find out who’s going first tomorrow.’ 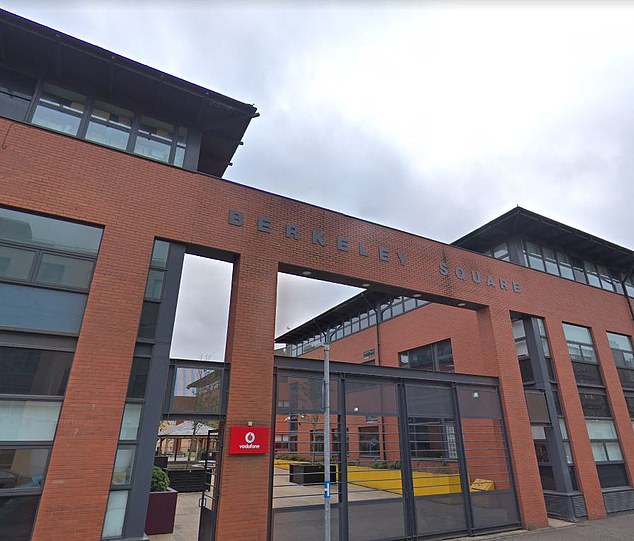 Vodafone workers in their Berkeley Street, Glasgow offices will today learn the detais of 360 jobs which the company plans to relocate to Manchester

Another added: ‘Is this really how a professional business goes about its business?

‘Here we are in Scotland sitting at our desks waiting to hear news of our pending redundancies and this pops up. What’s the news? ‘We’ve binned 350-plus jobs?’.’

A third worker posted: ­’Astonished at this. Multiple redundancies in Scotland and this is what a senior leader posts? Truly awful.’

A spokesman for Vodafone UK told MailOnline today: ‘It was an internal event. No offence was meant and we apologise unreservedly.’

told the paper: ‘It was an internal event. No offence was meant and we apologise unreservedly.’