Volcanoes on Mars could be geologically ACTIVE and may mean microbes lived there, study finds

Volcanos on Mars could still be active, researchers claim, saying that it could mean life on the Red Planet was active within the past 30,000 years.

University of Arizona’s Lunar and Planetary Laboratory and the Planetary Science Institute discovered unknown volcanic deposits in satellite images of the planet.

The team said these images showed evidence of eruptions in the past 50,000 years, in the Elysium Planitia region, about 1,000 miles from the NASA InSight lander.

Most volcanism on the Red Planet occurred between three and four billion years ago, with smaller eruptions in isolated locations continuing up to three million years ago.

They say this evidence ‘absolutely raises the possibility that there could still be volcanic activity on Mars’ and of habitable conditions under the Martian surface.

‘This may be the youngest volcanic deposit yet documented on Mars,’ said lead study author David Horvath, adding that ‘if we were to compress Mars’ geologic history into a single day, this would have occurred in the very last second.’

Craters on Mars where deposits have been discovered that suggest very recent volcanic activity, within the past 50,000 years 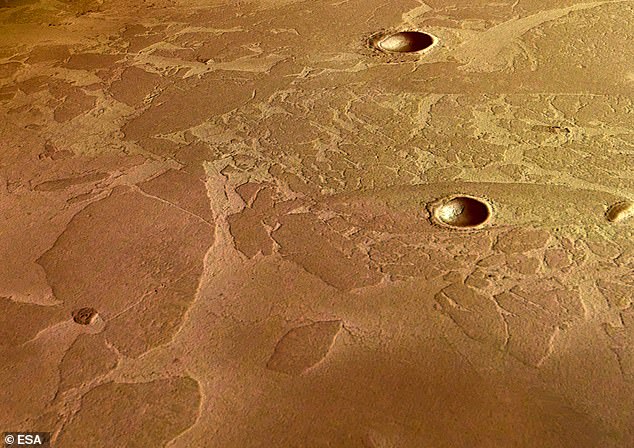 The team said these images showed evidence of eruptions in the past 50,000 years, in the Elysium Planitia region, about 1,000 miles from the NASA InSight lander

Elysium planitia is the location of the volcanic activity

The Elysium planitia on Mars is a broad plain straddling the equator of the Red Planet, lying south of the volcanic Elysium province.

Lava flows dating back hundreds of thousands, not millions, of years have been found in the region.

There is also evidence of volcanic activity as recently as 50,000 years ago and long-gone ocean hundreds of miles wide.

It is hte landing site of NASA’s InSight lander, sent to Mars to look for evidence of Marsquakes.

Many of which have been found within the region.

The ‘recent’ volcanic eruption the team have evidence for produced an 8-mile-wide, smooth, dark deposit surrounding a 20-mile-long volcanic fissure.

‘When we first noticed this deposit, we knew it was something special,’ said study co-author Jeff Andrews-Hanna, the senior author on the study.

‘The deposit was unlike anything else found in the region, or indeed on all of Mars, and more closely resembled features created by older volcanic eruptions on the Moon and Mercury.’

Further investigation showed that the properties, composition and distribution of material match what would be expected for a pyroclastic eruption.

That is an explosive eruption of magma driven by expanding gasses, not unlike the opening of a shaken can of soda.

The majority of volcanism in the Elysium Planitia region and elsewhere on Mars consists of lava flowing across the surface, similar to recent eruptions in Iceland being studied by co-author Christopher Hamilton.

Although there are numerous examples of explosive volcanism on Mars, they occurred long ago. However, this deposit appears to be different.

‘This feature overlies the surrounding lava flows and appears to be a relatively fresh and thin deposit of ash and rock, representing a different style of eruption than previously identified pyroclastic features,’ Horvath said. 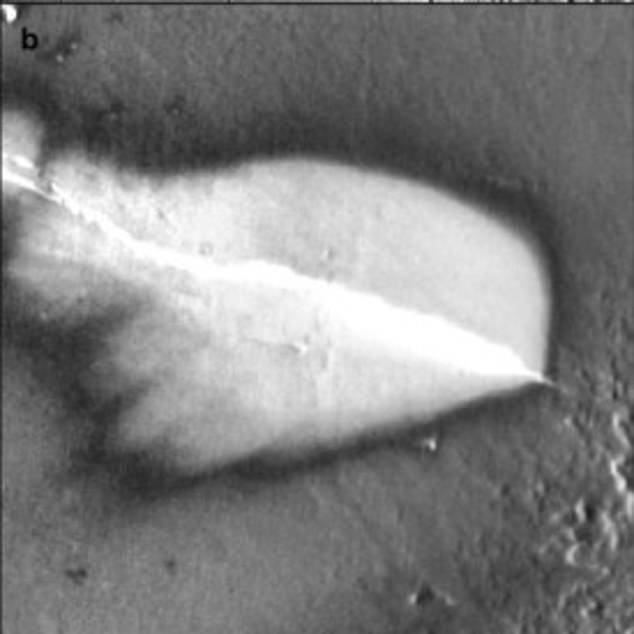 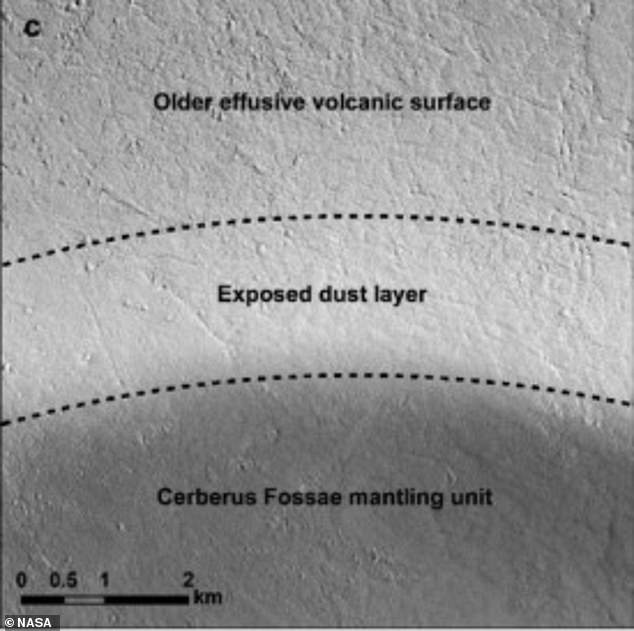 ‘This eruption could have spewed ash as high as 6 miles into Mars’ atmosphere. It is possible that these sorts of deposits were more common but have been eroded.’

The site of the recent eruption is about 1,000 miles (1,600 km) from NASA’s InSight lander, which has been studying seismic activity on Mars since 2018.

Two Marsquakes, the Martian equivalent of earthquakes, were found to originate in the region around the Cerberus Fossae, and recent work has suggested the possibility that these could be due to the movement of magma deep underground.

‘The young age of this deposit absolutely raises the possibility that there could still be volcanic activity on Mars, and it is intriguing that recent Marsquakes detected by the InSight mission are sourced from the Cerberus Fossae,’ Horvath said. 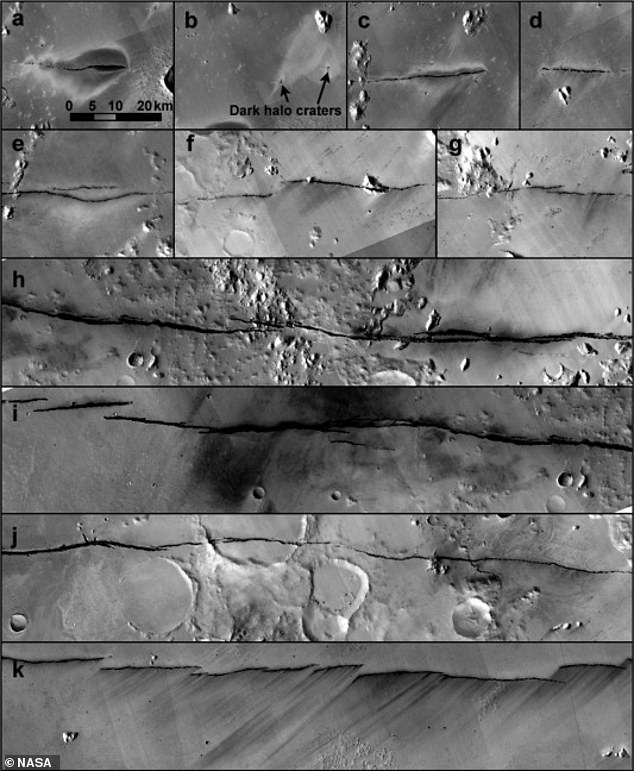 Images showing gaps, deposits and craters within the Martian surface where it is thought volcanic activity took place within the past 50,000 years 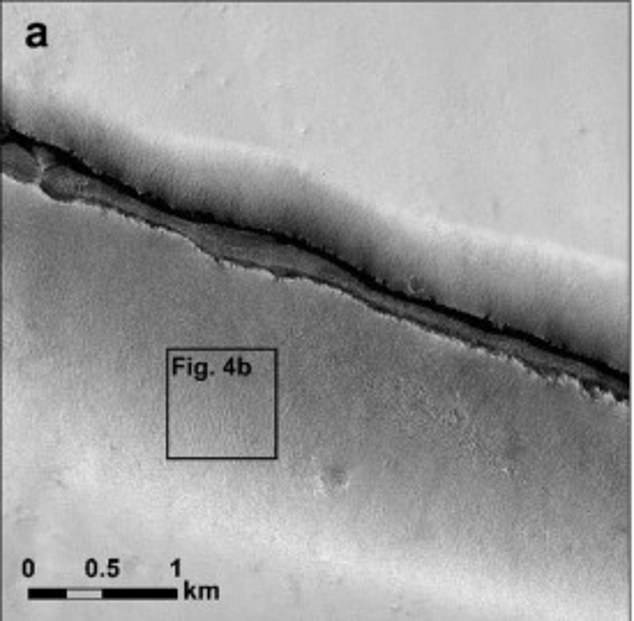 In fact, the team of researchers predicted this to be a likely location for Marsquakes several months before NASA’s InSight lander touched down on Mars.

A volcanic deposit such as this one also raises the possibility for habitable conditions below the surface of Mars in recent history, Horvath said.

‘The interaction of ascending magma and the icy substrate of this region could have provided favourable conditions for microbial life fairly recently and raises the possibility of extant life in this region,’ he said.

Similar volcanic fissures in this region were the source of enormous floods, perhaps as recently as 20 million years ago, as groundwater erupted out onto the surface. 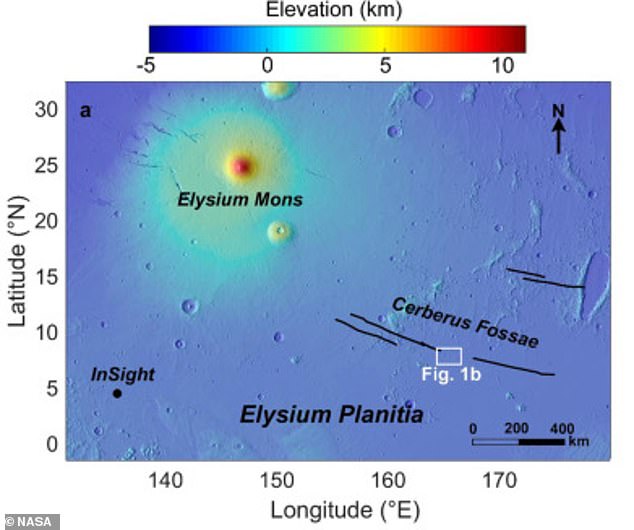 Scientists claim to have found evidence of FUNGI on Mars

A scientist dubbed the ‘Space Tiger King’ has claimed that strange ‘puffball-like’ rocks on Mars are actually mushrooms.

Microbiologist Dr Xinli Wei from the Chinese Academy of Sciences, astrophysicist Dr Rudolph Schild from Harvard-Smithsonian and Dr. Rhawn Gabriel Joseph, aka Space Tiger King, made the claims after studying images snapped by NASA’s Curiosity rover on the Red Planet and the orbiting HiRISE craft.

Their study, was has met been with skepticism from the scientific community, argues that what NASA called rocks are actually fungus-like specimens growing in the Martian landscape.

The trio claim that these ‘mushrooms’ seem to shrink, appear and disappear over a period of days, weeks and months. In one example, the team says there is evidence of fungi resembling Puffballs on Earth ‘re-sprouting’ in tracks left behind by the NASA Curiosity rover.

Pranabendu Moitra, a research scientist in the University of Arizona Department of Geosciences, has been probing the mechanism behind the eruption.

An expert in similar explosive eruptions on Earth, Moitra developed models to look at the possible cause of the Martian eruption.

He suggests that the explosion either could have been a result of gases already present in the Martian magma, or it could have happened when the magma came into contact with Martian permafrost.

‘The ice melts to water, mixes with the magma and vaporizes, forcing a violent explosion of the mixture,’ Moitra said.

‘When water mixes with magma, it’s like pouring gasoline on a fire.’

He also points out that the youngest volcanic eruption on Mars happened only 6 miles from the youngest large-impact crater on the planet – a 6-mile-wide crater named Zunil.

‘The ages of the eruption and the impact are indistinguishable, which raises the possibility, however speculative, that the impact actually triggered the volcanic eruption,’ Moitra said.

Several studies have found evidence that large quakes on Earth can cause magma stored beneath the surface to erupt. The impact that formed the Zunil crater on Mars would have shaken the Red Planet just like an earthquake, Moitra explained.

While the more dramatic giant volcanoes elsewhere on Mars – such as Olympus Mons, the tallest mountain in the solar system – tell a story of the planet’s ancient dynamics, the current hotspot of Martian activity seems to be in the relatively featureless plains of the planet’s Elysium region. 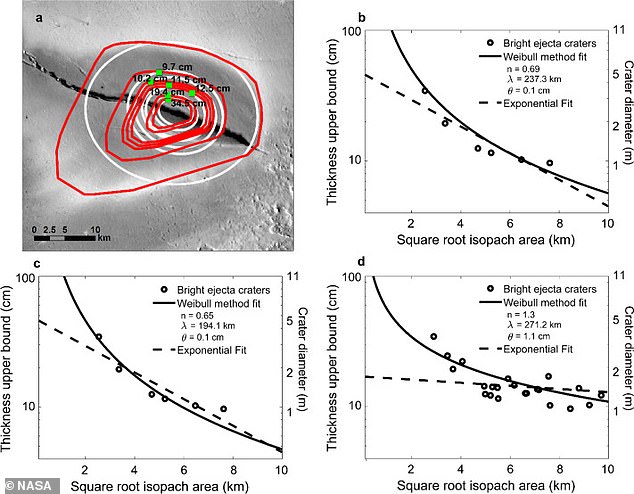 Andrews-Hanna said it’s remarkable that one region hosts the epicentres of present-day earthquakes, the most recent floods of water, the most recent lava flows, and now an even more recent explosive volcanic eruption.

‘This may be the most recent volcanic eruption on Mars,’ he said, ‘but I think we can rest assured that it won’t be the last.’

The volcanic deposit described in this study, along with ongoing seismic rumbling in the planet’s interior detected by InSight and possible evidence for releases of methane plumes into the atmosphere detected by NASA’s MAVEN orbiter, suggest that Mars is far from a cold, inactive world, Andrews-Hanna said.

‘All these data seem to be telling the same story,’ he said. ‘Mars isn’t dead.’

The findings have been published in the journal Icarus.