Mark McGowan has locked out Queenslanders from Western Australia just one week before Christmas.

The WA Premier declared the Sunshine State as ‘medium risk’, meaning travellers must have an exemption to enter and quarantine for 14 days upon arrival.

Tasmanians will also now have to self-isolate for 14 days in WA with the state now dubbed ‘low risk’, however they will not need an exemption.

The new border policies will come into effect at midnight on Sunday.

HAS MARK MCGOWAN GONE TOO FAR?

Under the ‘extreme risk’ criteria, travellers from NSW will not even be able to enter WA for compassionate reasons and exemptions will only be granted to certain government and specialist workers.

The measure will come into effect from midnight on Saturday, hampering travel plans for Australians hoping to spend Christmas on the west coast.

Western Australia reported no new cases of Covid-19 on Friday, with Mr McGowan saying he wanted his state to ‘remain COVID-free until we reach our Safe Transition Date’ on February 5.

‘The situation around the nation is developing rapidly, and we have to respond as a result,’ he said.

With WA’s borders set to open on February 5, University of WA epidemiologist Zoe Hyde called for Mr McGowan to push back the re-opening even further given the uncertainty surrounding the new Omicron variant. 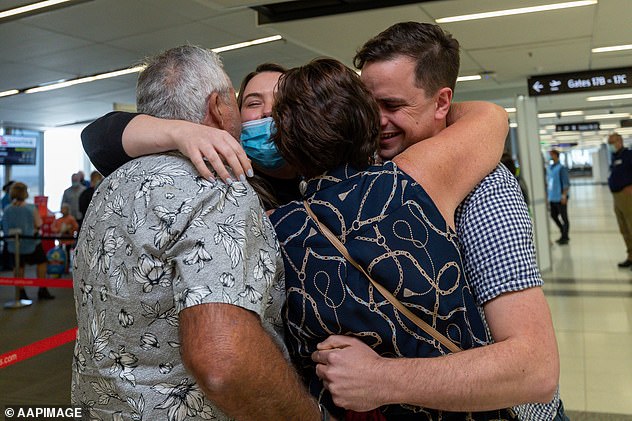 Families separated by Western Australia’s strict border closures will be reunited from February 5 (pictured, a reunion at Perth Airport 12 months ago after the state reopened to Victoria)

She said WA should wait until they have more information about how deadly the virus is in other parts of Australia before making that decision.

‘We need to know how well our vaccines are going to hold up against [Omicron],’ she told ABC News.

‘I think our existing plan would have worked if we were facing the Delta variant… but I think the conditions are very different now.’

She said quarantine-free travel to WA should be banned until the state’s eligible population had received their Covid-19 booster shot.

‘If we open with our current levels of vaccination, I think the virus is going to spread like wildfire,’ she said, adding the February re-opening would likely lead to hundreds of Covid deaths in WA.