Western Australia will be next to enforce a state-wide ban on single-use plastic bags, with Premier Mark McGowan announcing on Tuesday the Government’s plan to phase them out by July next year.

‘Very pleased to announce that from July 1 next year that single-use plastic bags will be banned in Western Australia,’ he declared.

‘We’re following on from the lead of other States who have already done it; we want to make sure our marine life, our wildlife (and) our very special environment is protected.’

South Australia, Tasmania, the Northern Territory and the Australian Capital Territory have already enforced plastic bag bans, while Queensland is looking to ban them from mid next year.

‘Plastic can blow all over the place, it can blow into our rivers, our waterways, our wetlands, our ocean,’ Mr McGowan said.

‘It kills marine life; turtles, dolphins, whales, all sorts of marine creatures- it kills wildlife across our broad and diverse State, it’s time we took action.’

‘This is something that has been called for by the environmental movement and also young people for a long period of time.’

‘I have for a long period of time had the view that plastic is the curse of the earth.’

The move follows major retail outlets Woolworths and Coles earlier this year revealing their intentions to banish single-use plastic bags from stores within the next 12 months.

Speaking at the event, Conservation Council of WA director Piers Verstegen was confident the initiative would be supported by the community.

‘Where plastic bags have been banned in other states, consumers and the community and responsible businesses have supported the move.’ 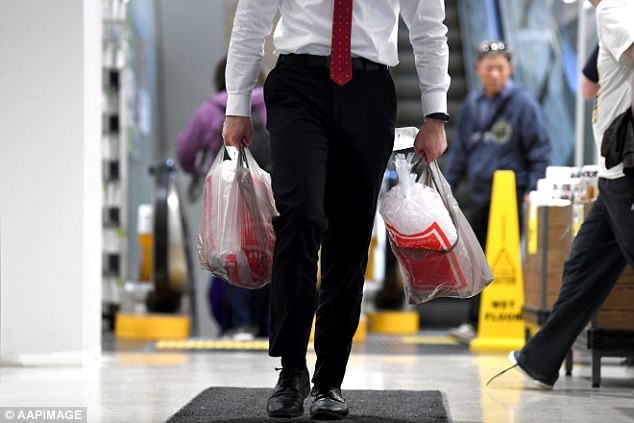 ‘As a father of a young child, can I say I’m not going to be a party pooper,’ he said.

Mr Dawson said he was confident the plan would pass the Upper House.

‘WA is one of the last states where single use plastic bags have not yet been banned and our environment and marine life is suffering,’ he said.

‘Millions of plastic bags find their way into creeks, rivers, wetlands and the ocean every year in WA and this pollution has a huge impact on marine life and aquatic ecosystems.’