Coleen and Wayne Rooney and Rebekah Vardy arrived at the High Court this morning as the the dramatic £3million ‘Wagatha Christie’ libel battle between the footballers’ wives entered its second week.

Coleen will continue giving evidence today, having said last Friday that she was glad she ‘put an end’ to Rebekah allegedly leaking other people’s information after her bid to catch the person ‘betraying’ her ‘red-handed’.

Last week Coleen told the trial how her marriage almost fell apart after Rooney was caught drink-driving with a party girl in 2017. Coleen said that in the aftermath of the incident involving former office worker Laura Simpson, she and their children stayed with her parents and she ‘didn’t know how my marriage was going to work out’.

The trial comes after a widely-shared social media post in October 2019, in which Coleen, 36, said she had carried out a ‘sting operation’ and accused 40-year-old Rebekah of leaking ‘false stories’ about her private life to the press.

Rebekah, who is married to Leicester City striker Jamie Vardy, denies leaking stories to the media and is suing her fellow footballer’s wife for libel, while Coleen is defending the claim on the basis her post was ‘substantially true’.

Coleen began giving evidence at the Royal Courts of Justice on Friday afternoon and is expected to continue speaking until this afternoon – with her husband Wayne Rooney due to step into the witness box tomorrow. 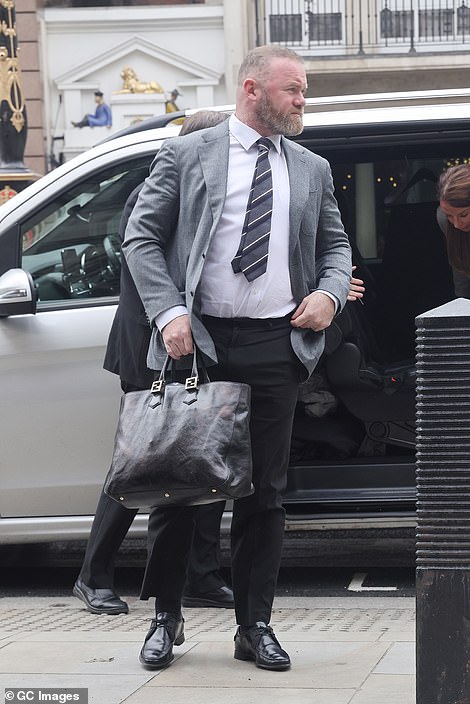 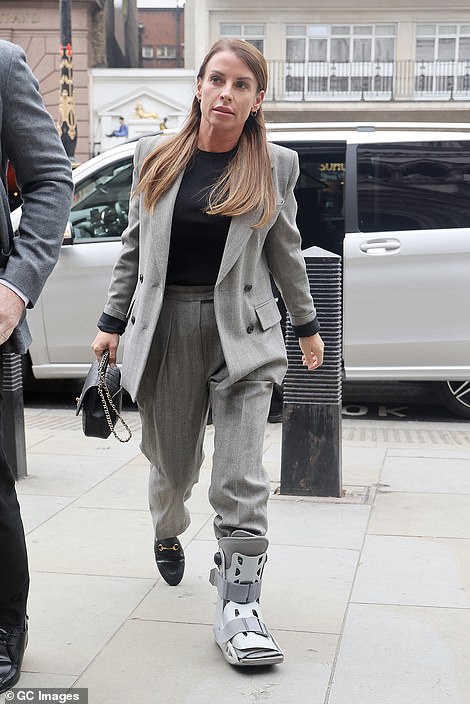 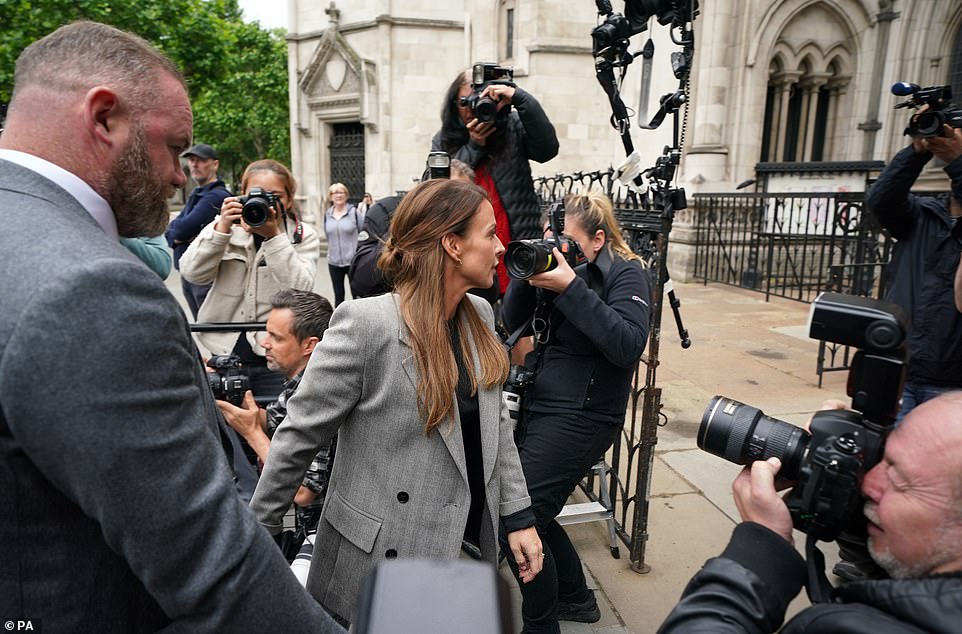 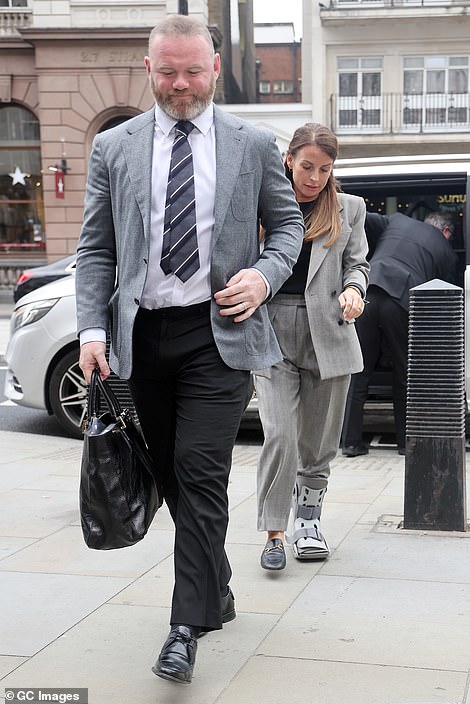 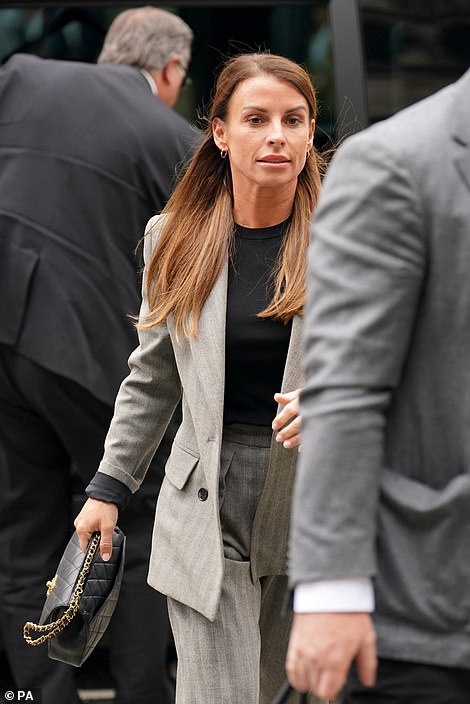 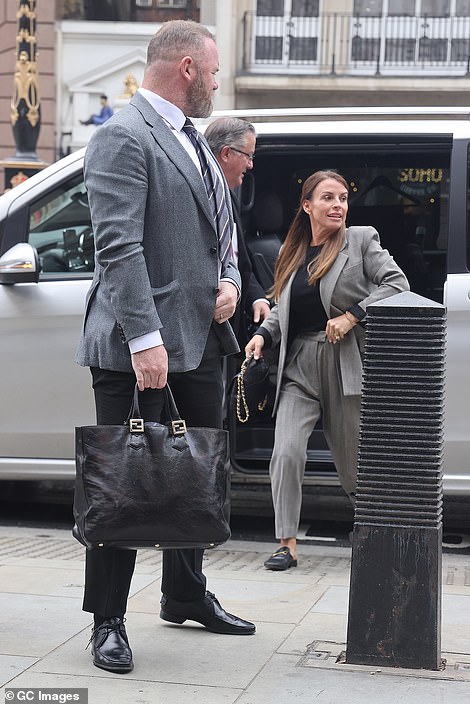 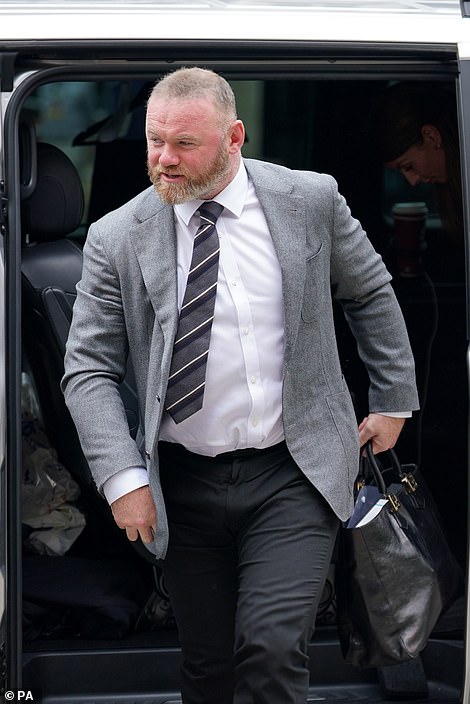 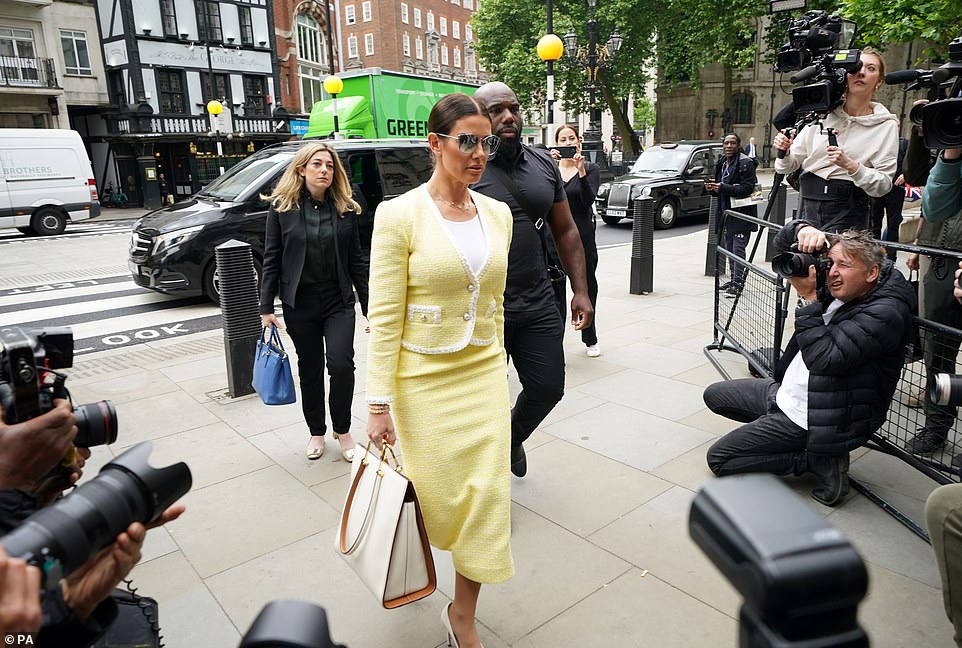 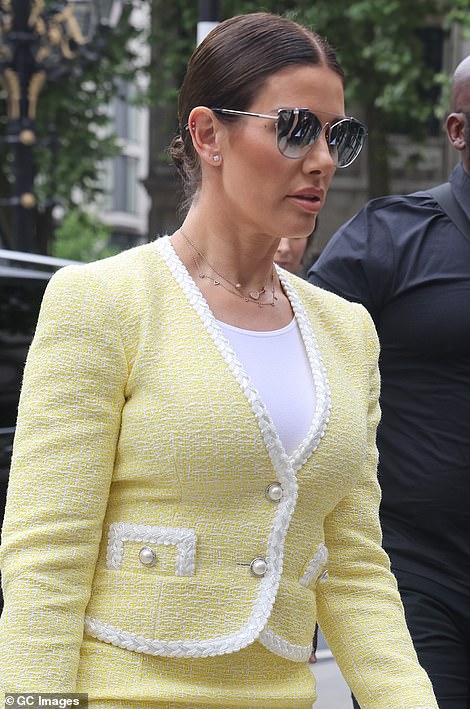 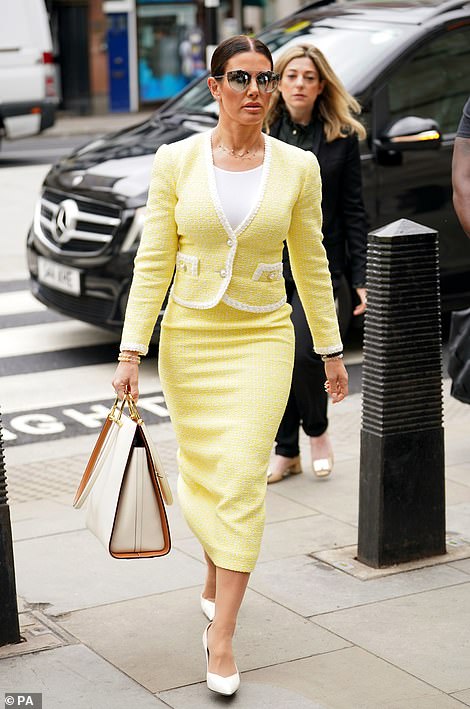 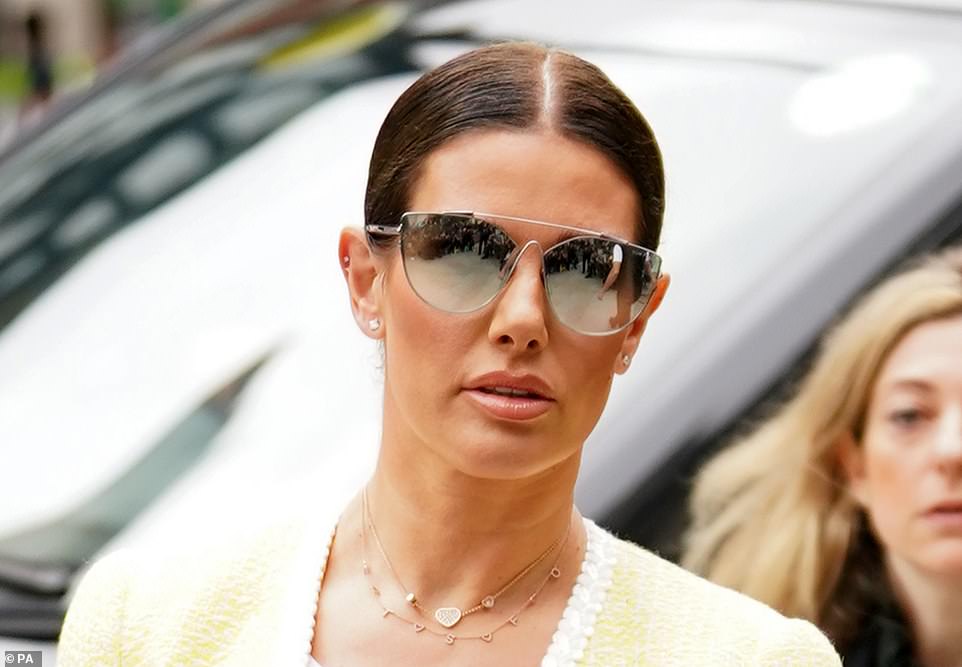 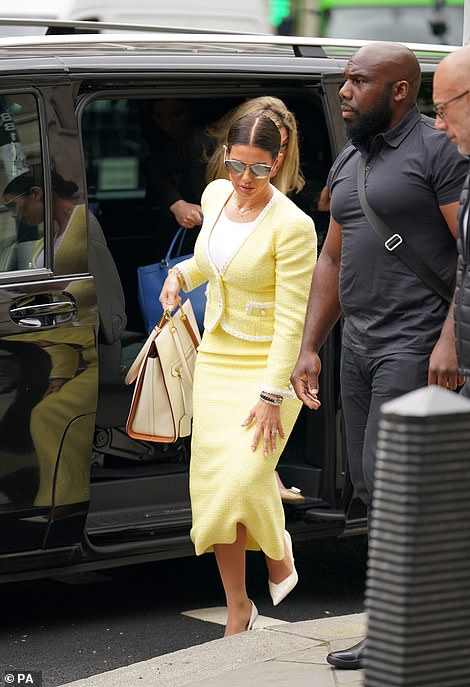 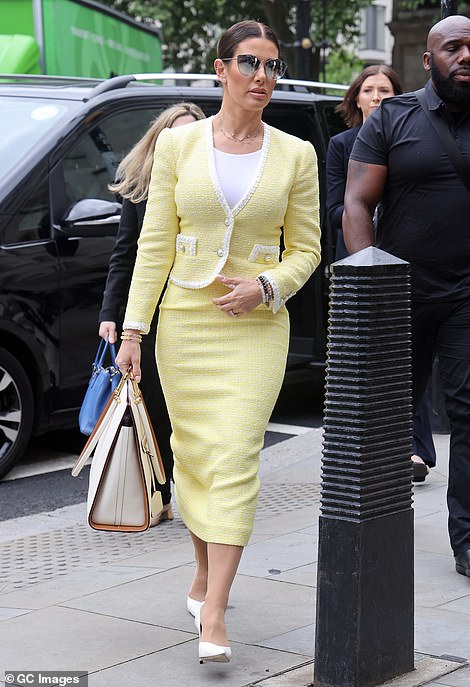 Last Friday, Coleen began giving evidence in Court 13. Asked by Rebekah’s barrister Hugh Tomlinson QC what she set out to achieve with the widely shared post, Coleen replied: ‘I wasn’t achieving anything, what I wanted was to stop the person who was leaking my private information to The Sun.’

Coleen added that she had given out warnings ‘many times’, but ‘it didn’t stop’.

Coleen Rooney has told the High Court she was in a ‘vulnerable situation’ following her husband Wayne’s arrest for drink-driving.

Starting her evidence as part of her libel battle against Rebekah Vardy on Friday, the TV personality alleged that private information about her marriage to the former England captain had been leaked to The Sun newspaper.

On September 1 2017, Rooney was arrested for drink-driving as a woman was found in the car at the time. He later received a two-year driving ban and was ordered to perform 100 hours of unpaid work after pleading guilty to the charge.

On Friday, the High Court was told Coleen took the couple’s four children and went to stay with her parents following the incident. She said: ‘I was in a vulnerable situation, I didn’t know how my marriage was going to work out, whether I was going on with my relationship.’

Coleen said that the couple later tried to work out their difficulties privately, but did not want the public to know about their potential reconciliation at the time.

In late October 2017 and early November, Coleen posted two pictures of her children – one on her public Instagram account and a second on her private account – with only the second photo containing Rooney.

Coleen told the High Court the pictures of the family in matching pyjamas was part of a campaign to support Alder Hey children’s hospital in Liverpool. She said that despite keeping the photo with Rooney to her ‘close circle’ on her private account, a story was later published in The Sun.

She later told the court: ‘That was information that I was happy to share in the private group… but I didn’t want the public to know that.’

However, she claimed that on November 1, the day of the private post including Mr Rooney, an article was published describing the post. Coleen said in her written evidence that she was ‘really hurt’ by the leak, ‘particularly because I felt as though someone that I trusted was betraying me at a very difficult time’.

‘This was my last resort,’ she continued. In a witness statement, she outlined her ‘growing sense of suspicion’ that Rebekah’s account might be linked to alleged leaks.

She explained she made two warning posts on social media and temporarily removed Rebekah from her account ‘but nothing had worked’.

Coleen added that she ‘wanted to catch the account responsible ‘red-handed’ as it were and so I came up with a plan’, before outlining her so-called ‘sting operation’ of positing fake stories and limiting access to them to Rebekah’s Instagram account.

She claimed that her concerns ‘went beyond my own posts’, writing: ‘I knew that I could not be the only one whose trust was being abused by the culprit and I now know from having seen the WhatsApp exchanges between Becky and Caroline that Becky was leaking information about a whole range of other people too.

‘I thought whoever was doing this was probably betraying other people in this way too.’

She added: ‘There have been no leaks of posts from my account since. No doubt similar behaviour by Becky was also a real worry for many others too. I am glad I have put an end to it.’

In court on Friday, Mr Tomlinson suggested Coleen had ‘no evidence’ to establish that Rebekah leaked information from her personal Instagram account.

‘I believe that Mrs Vardy knew that this was happening, whether it was Mrs Vardy herself or it was someone she’s given permission to,’ Coleen said.

Mr Tomlinson replied that ‘you might believe that Derby County will win the premiership’, adding: ‘It’s not evidence that they are going to.’

Coleen’s husband, former England footballer Wayne Rooney, is manager of the Derby County football team and was sat metres away from his wife during the hearing.

Before Coleen began her evidence on Friday afternoon, Rebekah entered the witness box for the final day of her evidence, telling the court she felt ‘bullied and manipulated’ while facing cross examination.

Rebekah, who became emotional during her evidence, told the court that she ‘wanted to clear her name’ and had brought the legal action for her children.

Earlier in the trial, TV personality Rebekah was asked about a 2004 interview in the defunct tabloid about a sexual encounter she said she had with singer Peter Andre.

Coleen’s barrister David Sherborne showed what appeared to be an A3 printout of the article to Rebekah in the witness box, before reading the headline: ‘Peter’s hung like a small chipolata, shaved, slobbery, lasts five minutes.’

However, Rebekah previously said that she was ‘forced into a situation by my ex-husband’ to do the interview.

On Friday, Rebekah was asked questions by her barrister, Hugh Tomlinson QC, about the article.

Mr Tomlinson asked: ‘Looking back now all these years, nearly 20 years since, can you remember whether the things presented in the article were things you actually said?’ 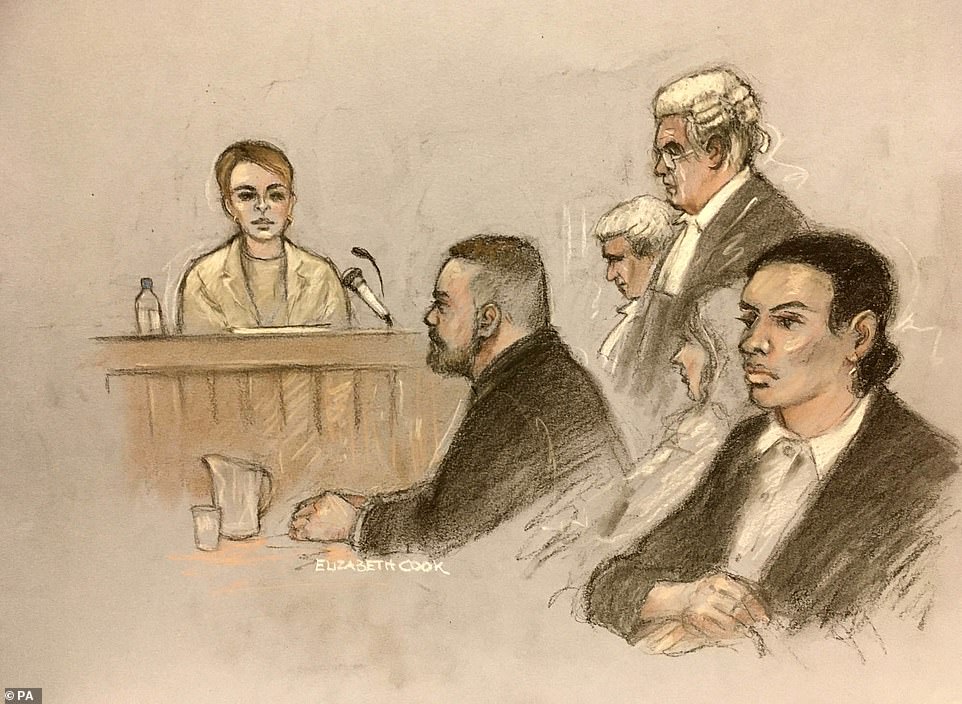 A court artist’s sketch of Coleen Rooney, watched by her husband Wayne, as she gives evidence at court in London last Friday 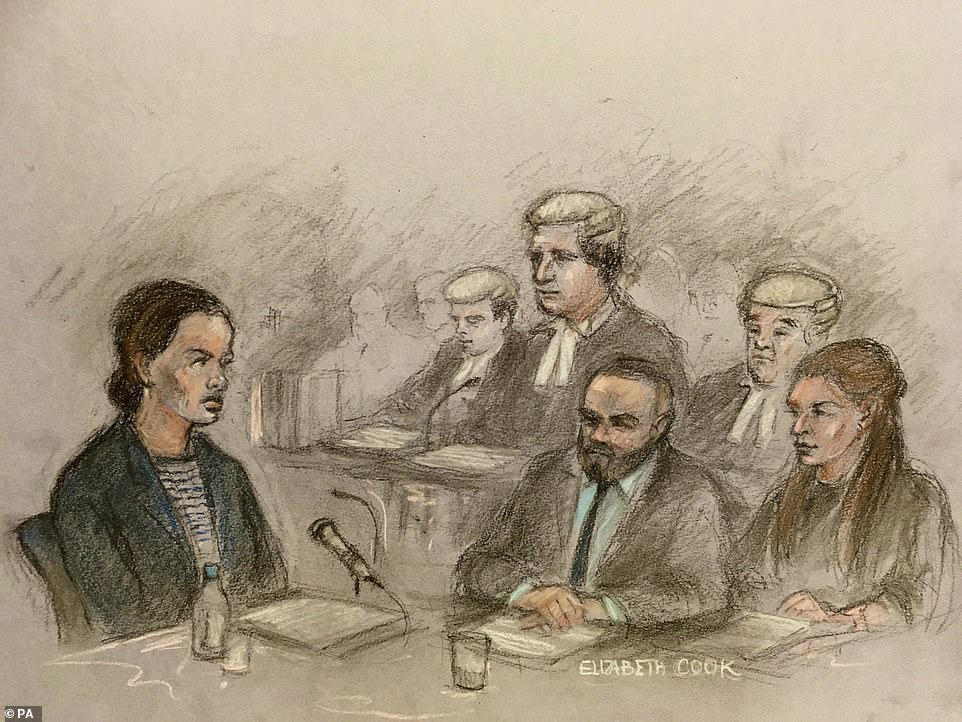 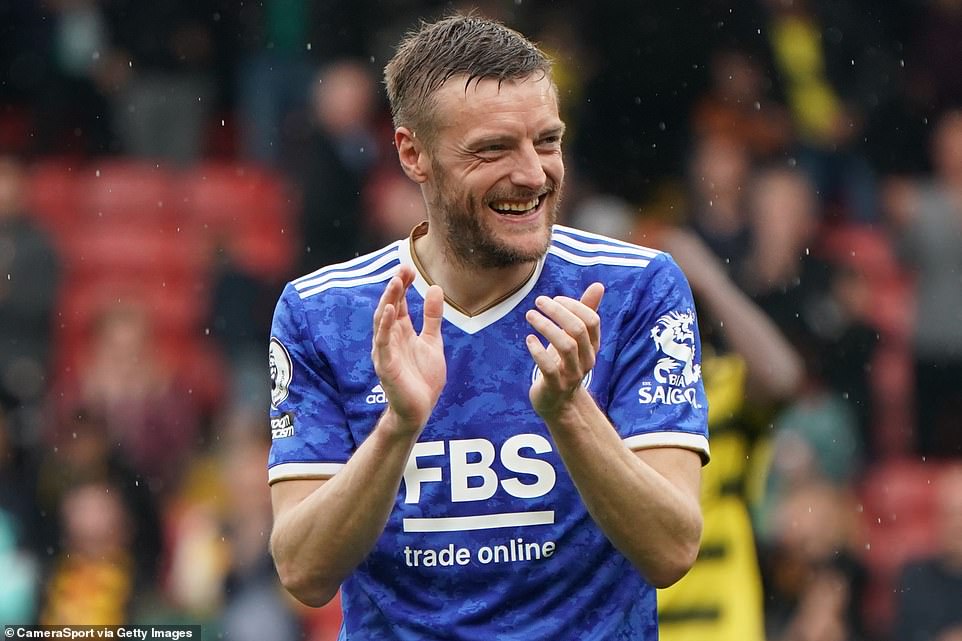 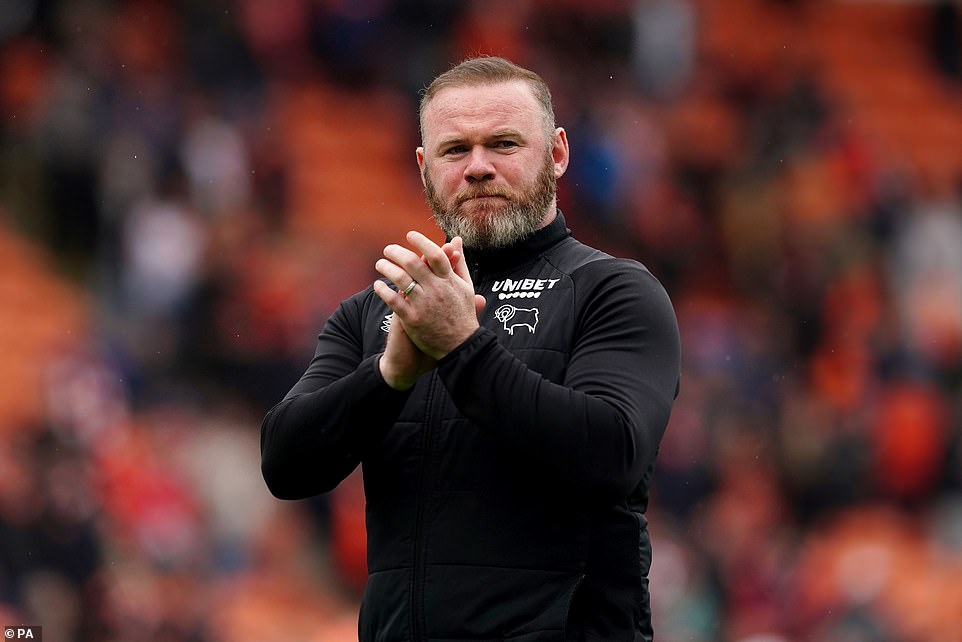 Ex-Manchester United striker Wayne Rooney is manager of Derby County (centre, after their match at Blackpool on April 30)

Rebekah replied: ‘There’s a lot of things in there that did not come out of my mouth that were misrepresented in the circumstances around that article I’m deeply sorry for. It’s shameful reading that, and one of my biggest regrets.’

Coleen is defending the libel claim brought by Rebekah on the basis of truth and public interest.

The libel battle comes after Coleen publicly claimed that an account behind three fake stories in The Sun that she had posted on her personal Instagram account was Rebekah’s.

The fake stories Coleen planted on her Instagram during the sting operation featured her travelling to Mexico for a ‘gender selection’ procedure, her planning to return to TV, and the basement flooding at her home.