A waitress has shed 125lbs. after her grandfather begged her to lose weight on his deathbed.

Jessica Reid, 25, from Phoenix, Arizona, was tipping the scales at a staggering 284lbs. when she heard her granddad Robert Cross’s dying wish.

The veteran, who passed away at the age of 95, urged his granddaughter to drop the weight and get in shape.

Powerful: Jessica Reid from Phoenix, shed 125lbs. after her grandfather Robert Cross (pictured) asked her to get healthy as his dying wish 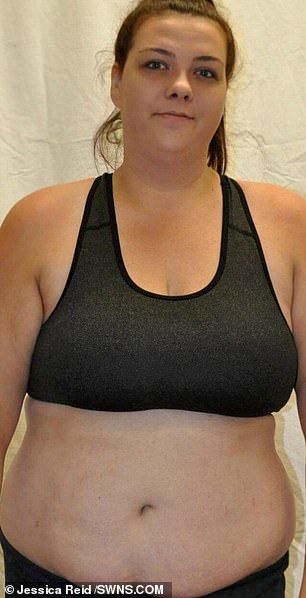 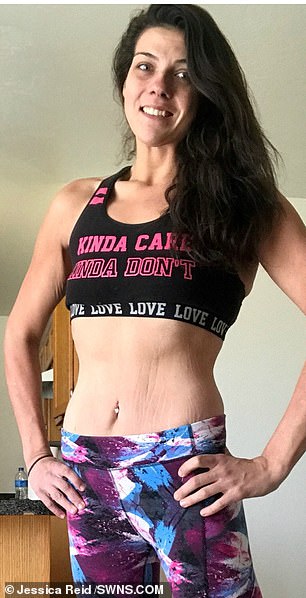 Transformation: She weighed 284lbs. in 2016 (left) and has since altered her lifestyle to weigh 160lbs. (right) with the help of CrossFit and an altered diet 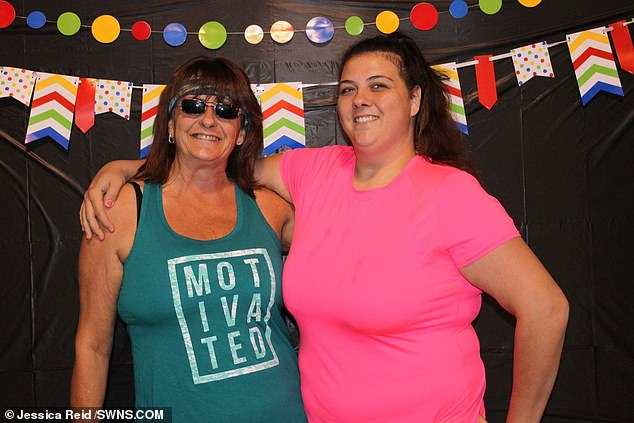 Making it work: Reid decided to join a bootcamp in 2016 to also help her lose the weight. This all came after her grandfather died at the age of 95 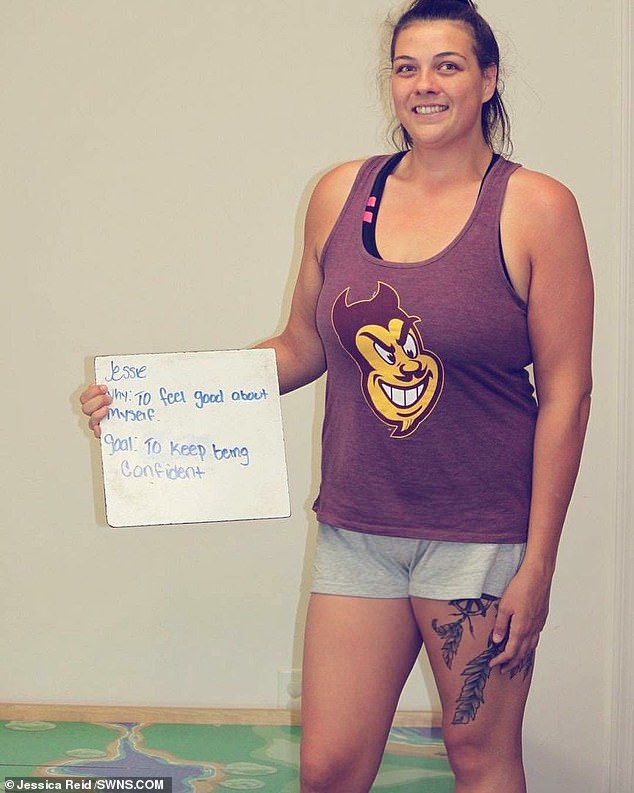 ‘His dying wish was for me to get in shape and to be in good health,’ Reid said. ‘He never bought up my weight before because he knew I was so sensitive about it and he thought I was beautiful anyway.’

‘But on his deathbed, he said: “Jessie, I want you to take care of your health and get in shape.”

‘After he told me that, I decided it was time to take care of myself. He wanted me to have a better life so my feelings weren’t hurt.’ 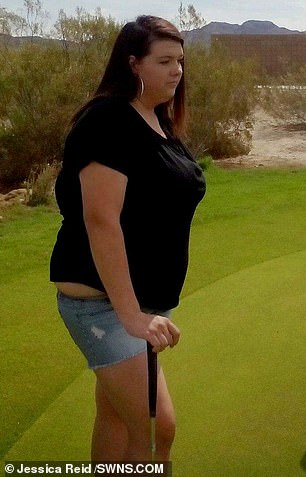 Time to listen: ‘His dying wish was for me to get in shape and to be in good health,’ Reid said about her grandfather

Reid weighted 284lbs. when her grandfather gave his dying wish and now weighs a healthy 160lbs. after getting her health on track. She also went from a size 18 in clothing to a size six.

‘I have been heavy my whole life,’ Reid said. ‘Everything revolved around food, we were eating out constantly. I grew up on Shirley Temples and chicken fingers.

The waitress suffered bullying at school on account of her large size. This bullying then extended to Facebook pages with people going as far as to hack her own social media account.

People would hack into my social media account and say nasty things,’ she said. ‘It was mostly about my weight. I was bullied for being heavier. I was never popular in high school or middle school.’

She continued: ‘They could call me a cow and tell me to lose weight. I didn’t want to step on the scales because I knew I weighed over 200 pounds.’

Reid’s weight struggle became even worse when she turned 21 and started drinking sugary, calorie-laden cocktails. She blamed downing Bahama Mamas – made of coconut rum, syrup and fruit juices –  and fast food cravings for piling on even more pounds.

‘I put on more weight when I started drinking,’ Reid said. ‘Every night after drinking, I would get Jack In The Box tacos or chicken wings. I was constantly eating carbs and fried food.’ 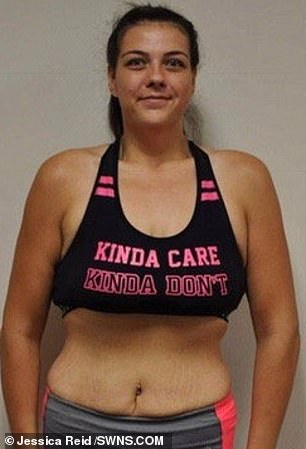 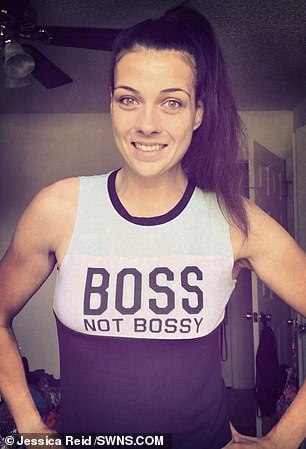 Baby steps: In August 2016, Reid swapped her daily diet of McDonald’s, bags of chips and takeout pizza for healthy foods like salmon, vegetables and protein bars as snacks. 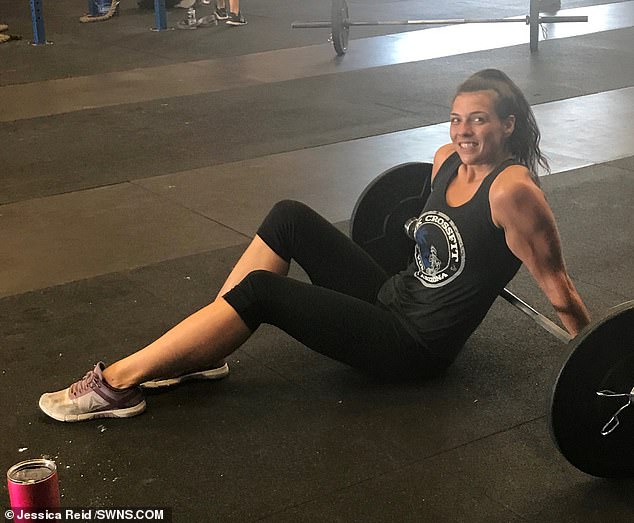 Pushing through: Reid also joined CrossFit and confessed to hating it at first. But she pushed on and the program helped her lose weight 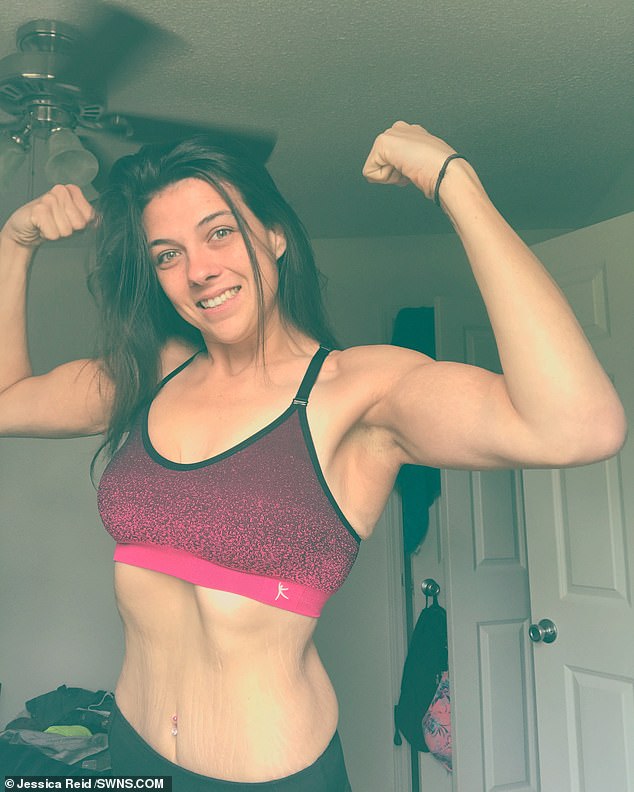 Strong: Even though she hated CrossFit at first, she did not give up on the program

Reid tried to diet, but she admitted that she was never able to stick to a healthy eating plan.

‘I tried so many times,’ she said. ‘My half brother is really into healthy eating and he tried to help me. But I could never stay on track. Food was an addiction for me.’

Eating was one way Reid said she could cope with her ’emotions and boredom’. 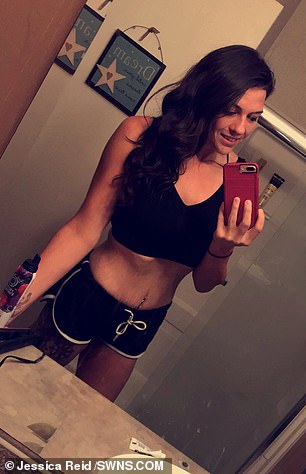 Happy: Reid said she now has excess skin from the weight loss, but she chooses to love that part of her body

‘If I was bored, I would eat,’ she admitted. ‘I had been doing it ever since I was a child.’

But in May 2016, Reid’s grandfather Robert passed away after having a pacemaker fitted. On his deathbed in a hospice, he begged her to lose weight and she finally started to face up to her food issues.

‘It still took me a couple of months after he passed away to realize that I needed to change my life completely,’ she said.

‘It wasn’t until about August that I started to change my eating habits. I went to the grocery store and bought lots of vegetables. I slowly weaned myself off the bad things, I threw out all the garbage and I replaced it with fresh fruit and vegetables.’

In August 2016, Reid swapped her daily diet of McDonald’s, bags of chips and takeout pizza for healthy foods like salmon, vegetables and protein bars as snacks. She also cut back on alcohol and only drank on special occasions.

As soon as she lost her first 10lbs., she enrolled at a bootcamp in Yuma, Arizona, where she was living at the time.

‘I lost about 17lbs. and a total of seven inches around my waist,’ Reid said about the bootcamp.

‘For my first month of CrossFit, I hated it,’ Reid confessed. ‘But I knew I had to keep pushing myself.’ 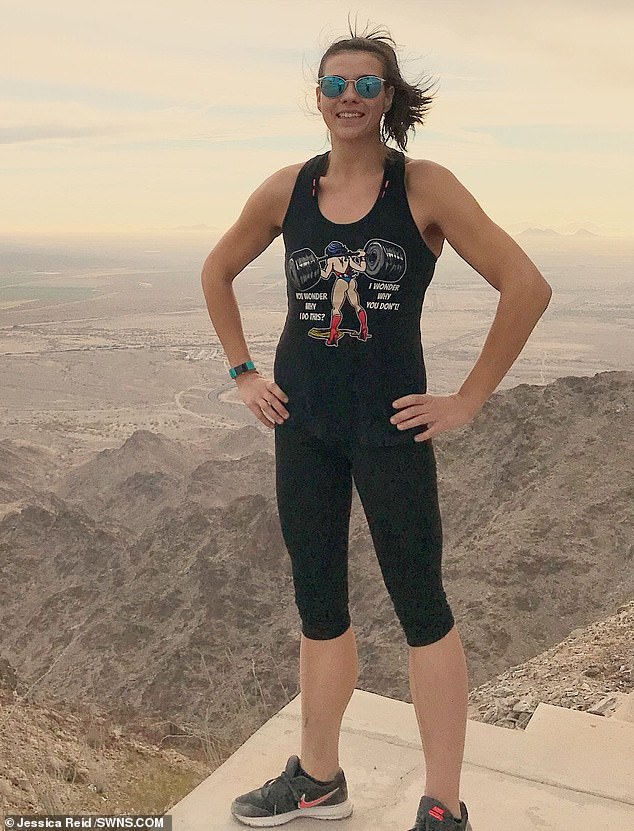 Positive: ‘Now I’m very positive. I wake up every morning thinking I want to be a better person than I was yesterday,’ Reid said 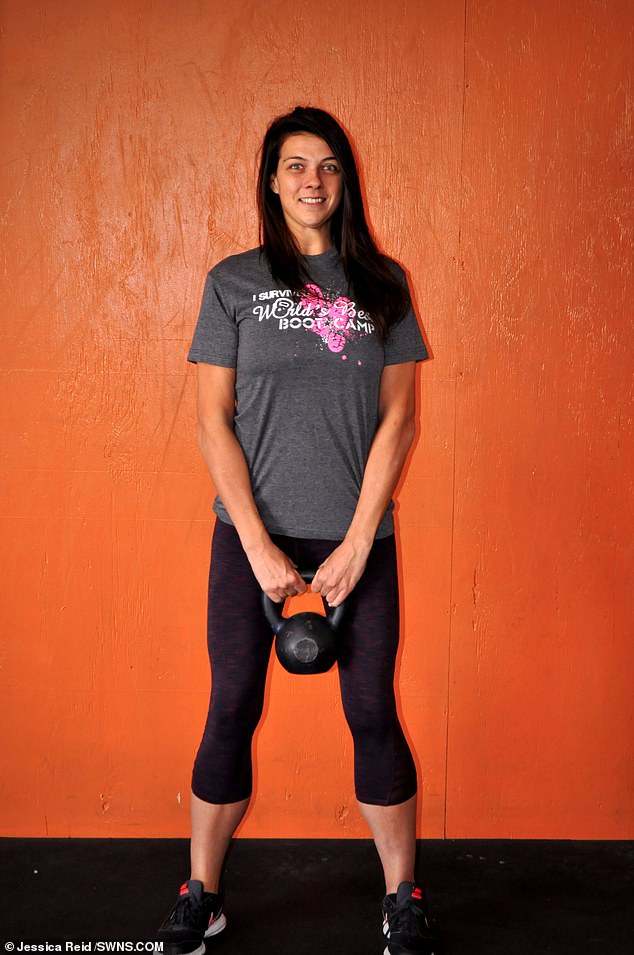 Balance: She works out three to four times a week and eats healthily almost all the time – but she does allow herself one cheat meal per week 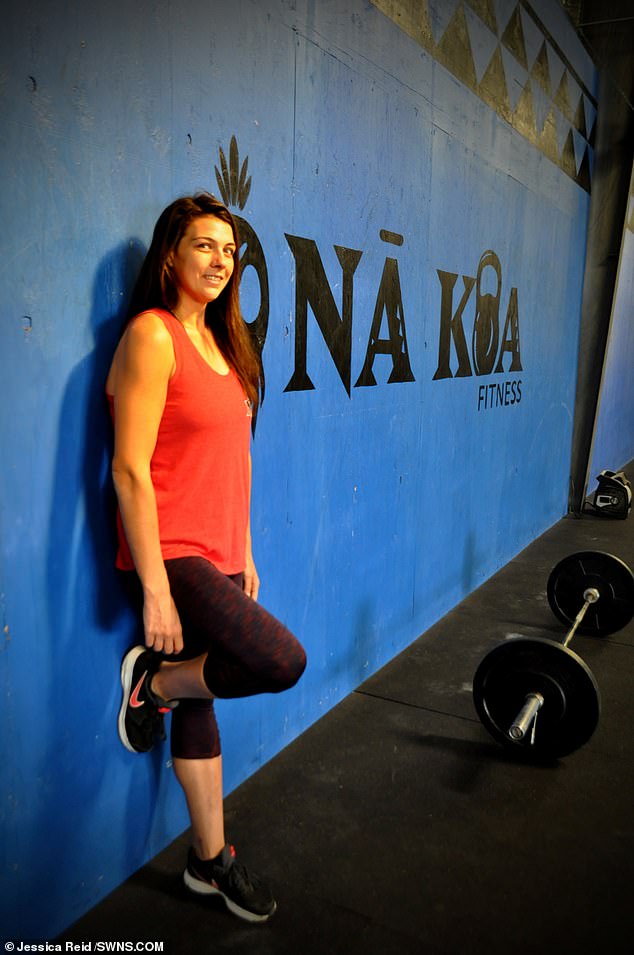 Guardian angel: ‘I feel like my granddad pointed me in the right direction and he is with me all the time,’ she said. 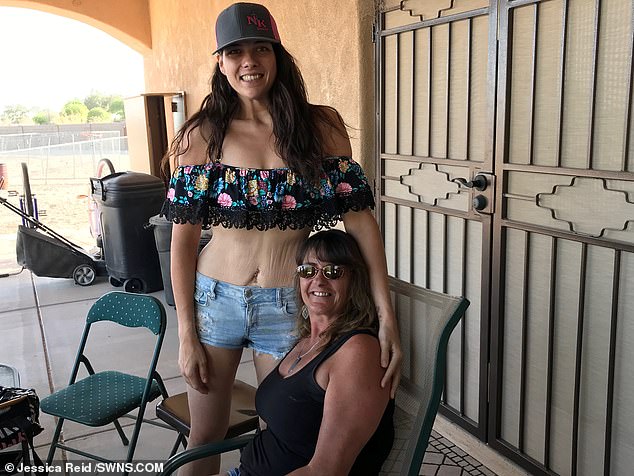 Showing off: ‘I have some loose skin and it doesn’t bug me,’ she said. ‘I flaunt it. I wear crop tops and bikinis, I don’t care’

She admitted that she struggled when her weight loss slowed down and hit a plateau.

‘I lost 90lbs. and I was waiting to hit the 100lbs. mark and it took so long, she said. ‘It took a month and a half to lose that 10lbs. My friends told me that I had to keep going and that I would get there.’

On November 2017, just after Thanksgiving, Reid hit her target weight of 160lbs.

‘It was amazing,’ she said about hitting the target. ‘It was a whole lifestyle change, it wasn’t a diet. This is how I live every day now. I don’t even weigh myself anymore, I know I’m fit and I eat healthy so I’m not worried anymore.’

She added that friends don’t even recognize her following the incredible transformation.

‘In October 2017, I went to Florida to visit some friends and they said they didn’t even realize it was me,’ Reid said. I’ll post transformation pictures on my social media and my new friends can’t believe I was ever that big.

‘Clothes shopping is so much easier now.’

Since losing the weight, Reid has noticed she has loose skin but she is happy to show it off.

‘I have some loose skin and it doesn’t bug me,’ she said. ‘I flaunt it. I wear crop tops and bikinis, I don’t care.’

She works out three to four times a week and eats healthily almost all the time – but she does allow herself one cheat meal per week.

‘Usually I indulge on a Sunday and I’ll eat chicken wings or whatever else I feel like,’ Reid said. ‘I’m a whole new person now. I had no confidence before, I was always really depressed.

‘Now I’m very positive. I wake up every morning thinking I want to be a better person than I was yesterday. I feel like my granddad pointed me in the right direction and he is with me all the time.’