Waitrose employee, 25, signed by man who created Blue after she performs during shift

Waitrose employee, 25, gets a recording contract after music exec who created Blue spotted her arriving for her shift with a guitar on her back and asked to hear a song

By Harry Howard And Charlie Jobson For Mailonline

This is the amazing moment a Waitrose employee and part-time busker, 25, is signed on the spot by the pop music manager who created boyband Blue after he saw her arriving for her shift with her guitar on her back and asked her to play.

Karina Ramage, 25, had arrived for her shift at the store in West Hempstead, north-west London, last Friday, when she was seen by Dan Glatman, 44.

Mr Glatman, who had gone into the shop to by biscuits and flour, then asked the 25-year-old part-time busker: ‘What’s with the guitar?’ 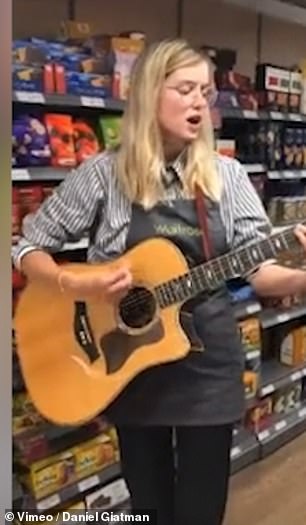 Karina Ramage, 25, performs her song ‘Wasteland’ for pop music manager Dan Glatman, who created boy band Blue, after he spotted her arriving for her shift at a Waitrose store in West Hempstead, north-west London, with a guitar on her back. Mr Glatman was wowed by what he heard and immediately signed her as a client

When the Glasgow-born performer told him she busked in her spare time with the instrument, he added: ‘let’s see what you’ve got’.

He then films her as she performs her song ‘Wasteland’, which is available on Spotify, about the damage which human activity is doing to the planet.

Footage shows Ms Ramage performing in the biscuit aisle to a wowed Mr Glatman and a gathering crowd of impressed shoppers.

The lyrics include lines such as: ‘We throw trash in the oceans, fill the waters with toxins… feed the turtles with bin bags, make the world a wasteland.’

On finishing the song, Ms Ramage receives wild applause, before Mr Glatman can be heard saying: ‘I’m in, I’m so in. That sounds like the sort of song the world needs to be hearing right now.

Mr Glatman, who also spontaneously signed the Froncysyllte Male Voice Choir after hearing them at a wedding in 2006, told MailOnline that he has now signed the rising star and is in the process of looking for a record label for her. 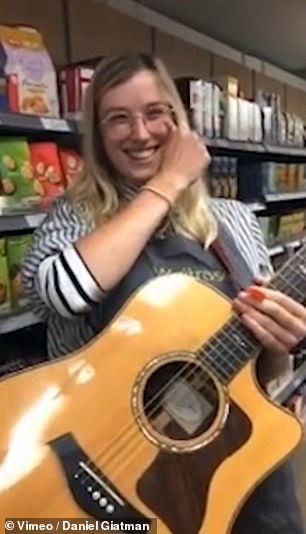 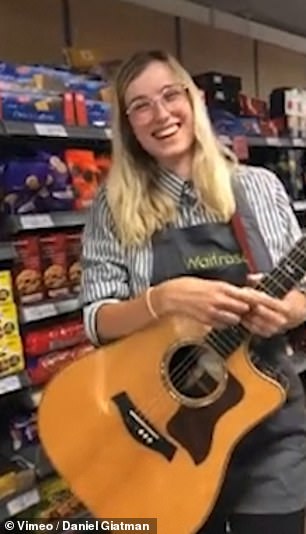 On finishing the song, Ms Ramage receives wild applause, before Mr Glatman can be heard saying: ‘I’m in, I’m so in. That sounds like the sort of song the world needs to be hearing right now. Mr Glatman told MailOnline: ‘I went in there for a packet of biscuits and a bag of flour and walked out with a star’

He said: ‘It totally blew me away. I was just like “my God”!

‘That was just like a hit, she was amazing!

‘I went in there for a packet of biscuits and a bag of flour and walked out with a star.

‘Karina is going to become the musical voice of the world.

‘She only works there twice a week. I just could not believe my luck.’

He added: She’s fantastic. I’m really excited about her. It’s very rare. You are searching for a needle in a haystack and I found it in a biscuit aisle.’

Mr Glatman previously co-created boyband Blue, who formed in 2000 and went on to win two BRIT awards and release five albums, three of which rose to number one in the UK albums chart.

His previous discovery of the Regimental Band of the Coldstream Guards led to them being signed by record label Universal Music.

Their album, ‘Heroes’, was released in 2009 and achieved platinum status after it was bought by more than a million listeners.