Waitrose slammed for advertising eggs before a VEGAN cooking show

It was a landmark moment for ITV; the broadcaster aired its first vegan cookery show last Sunday. However, those hoping for some thoughtful advertising were less than impressed when a sponsor ad showing eggs and poultry popped up.

‘Living on the Veg’, a ten-part series that sees hosts Henry Firth and Ian Theasby recreating classic recipes with plant-based food, featured an advert for Waitrose, which sponsors the show, showing farm animals and a poached egg on toast.

Despite the series, which was originally seen on vegan recipe channel BOSH!’, receiving overall praise, some viewers were furious at the ‘awkward’ sponsor commercials.

Really? Waitrose has been slammed for advertising eggs before new vegan cooking show ‘Living on the Veg’ on ITV last week 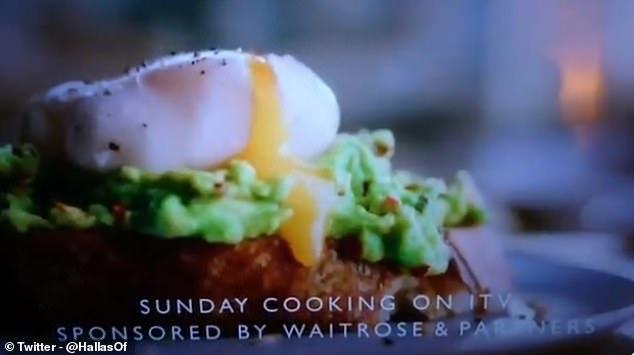 The first episode of the show, which saw Sadie Frost recreate a roast dinner, left vegan viewers ‘disappointed’ when images of a chicken roaming a field followed by a photo of a poached egg on toast appeared on screen.

One raged: ‘Can you please replace the Waitrose sponsorship images of cows, chickens and eggs around the Living on the Veg plant-based cooking show?

‘It’s totally misleading. I am sure you can use images of plants, fruits and veggies to be more appropriate.’

‘Loving that the vegan cooking show on ITV is sponsored by a Waitrose advert for eggs’, commented another.

More users complained that the blunder was plain ‘awkward’ while one insisted he ‘couldn’t make it up’.

Another piped up: ‘Vegan cooking show ‘Living on the Veg’ on ITV, great, but sponsored by farm animals…awkward.’

‘Gotta love the vegan TV show on ITV London, adverts topped and tailed with chickens and cows – sponsored by Waitrose. You couldn’t make it up’, wrote an angry viewer.

A third agreed: ‘The most wonderful vegan cookery show on @ITV – brilliant guys. But @waitrose as a sponsor couldn’t even manage a vegan version for the ‘sponsored by’ advert.’ 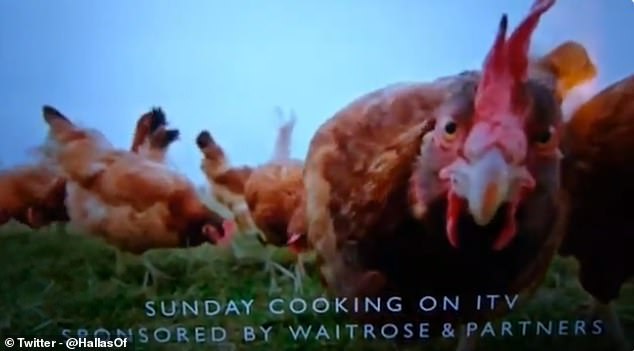 The show this week saw Sadie Frost recreate roast dinner, but viewers were unimpressed that Waitrose showed chickens in the sponsored ads

A Waitrose & Partners spokesperson told the Telegraph: ‘We’re sorry for the sponsorship credits used around this programme on Sunday – our credits top and tail a number of food shows on ITV and we didn’t know the subject of this one in advance.’ 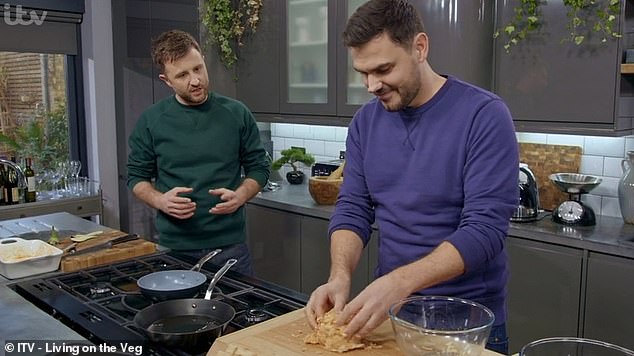 The show is the first of it’s kind on ITV and received overall praise. Pictured, hosts Henry Firth (right) and Ian Theasby (left)

An ITV spokesperson said: ‘Waitrose’s sponsorship with ITV is pegged around Sunday morning cookery programming, as opposed to the Living on the Veg show specifically.

‘As such the brand indents are tailored around cookery themes, and absolutely no offence was intended.’