Walking with Winston in Paris: Churchill adored the City of Light – now retrace his footsteps

Give me London, Paris or New York,’ Winston Churchill said in 1937 when contemplating where he could live in the world away from his beloved Chartwell in Kent.

Certainly Paris played a hugely important role in his life. He visited the French capital continually, as a child with his father, as an adolescent on holiday, and as a statesman. He returned just before it was occupied by the Nazis, and soon after it was liberated in World War II. A lifelong Francophile, he adored the City of Light.

Having recently published a biography of Churchill, I wanted to take my wife Susan there in order to visit the places he loved, and see how little or how much they’ve changed since his first visit 136 years ago.

Imposing presence: The famous Eiffel Tower in Paris. Churchill visited the French capital continually, as a child with his father, as an adolescent on holiday, and as a statesman

As an eight-year-old in 1883, Churchill was taken there by his father Lord Randolph Churchill, whose wedding had been held in the British Embassy in the Rue du Faubourg Saint-Honore.

As they crossed the north-eastern corner of the Place de la Concorde, Lord Randolph pointed out that the large statue of the city of Strasbourg was covered in a huge black crepe drape.

He explained to the young Winston that this was because Strasbourg had been lost in the Franco-Prussian War 13 years earlier. Churchill remembered thinking that he hoped it would be restored and the drape removed, which was not to happen until he was 44 and France regained Alsace-Lorraine in the Treaty of Versailles in July 1919. 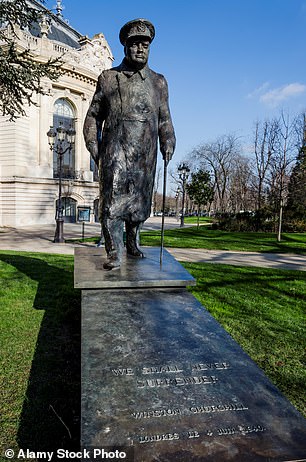 A bronze statue of Sir Winston Churchill, in the grounds of the Petit Palais, an art gallery in Paris

Today the statue is exactly as it was when the drape was removed, and features a beautiful and majestic young woman with a rather uncomfortable-looking castle sitting on top of her head.

During the Versailles Treaty discussions, Churchill stayed at the Hotel Majestic in the Avenue Kleber, which is now The Peninsula, undoubtedly one of the world’s most elegant great hotels.

Susan and I were hugely impressed by its high ceilings, chic interiors, smooth service and opulent rooms. At various moments, I closed my eyes and easily imagined the British conference delegation staying there.

Then, crossing the Seine over the Pont de la Concorde and turning right at the Assemblee Nationale — the facade of which was draped by vast swastika flags from 1940 to 1944 — we arrived at the Foreign ministry, the Quai d’Orsay, where Churchill saw diplomats hurriedly burning piles of secret documents in 1940, days before the city fell to the Germans on June 14.

There, he learned from the French commander-in-chief General Gamelin on May 22, 1940, that the military situation was hopeless. As he recalled in a Commons speech that December, ‘I remember well going to Paris at that dark moment after the first defeat and asking immediately: “What are you going to do with your mass-of-manoeuvre or general reserve?”

‘It was with the greatest sorrow I learned that a general reserve did not exist.’

Crossing back over the Seine from the Quai d’Orsay on the Pont Alexandre III, we stopped to admire the splendid statue of Churchill on the Avenue Winston Churchill, where he is depicted striding down the Champs Elysee just as he did on Remembrance Day 1944. 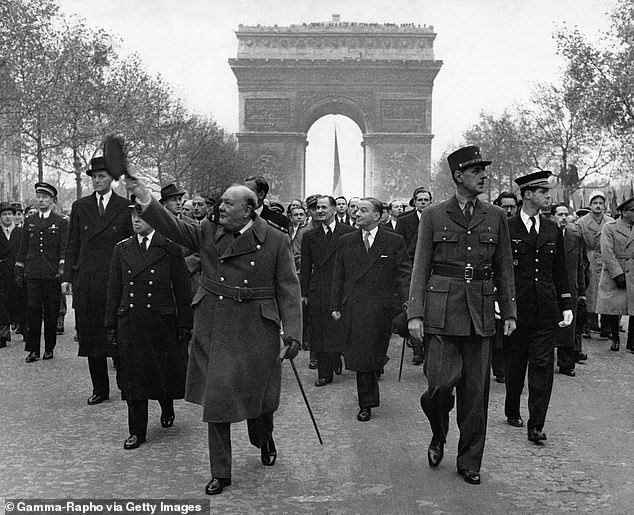 On that day, Churchill also laid a wreath on the nearby statue of his friend and World War I colleague Georges Clemenceau, whose defiant speeches of 1917 Churchill listened to at the Assemblee Nationale, and used as a template for his own great wartime oratory in 1940.

In July 1927, Churchill visited Clemenceau at his bijou home at No 8 Rue Benjamin Franklin, close to the Trocadero, so we decided to drop in there.

We were pleased we did. The house and its pretty garden (where Clemenceau kept chickens) remain as they were on the day of his death in November 1929.

Visitors can see the ancient keys of the Bastille Prison, Clemenceau’s clothes and library and bathroom and paintings.

A moving and fascinating place, it captures an echo of the great Frenchman’s resilience. Susan — who is chairman of London’s Southbank Centre — thought it one of the best small museums we had visited.

As well as saying a few words to Clemenceau’s daughter after laying the wreath on his statue on Remembrance Day 1944, Churchill also spoke to the widow of Marshal Ferdinand Foch when laying a wreath at his tomb at Les Invalides, and paid his respects at the tomb of his great hero, Napoleon. 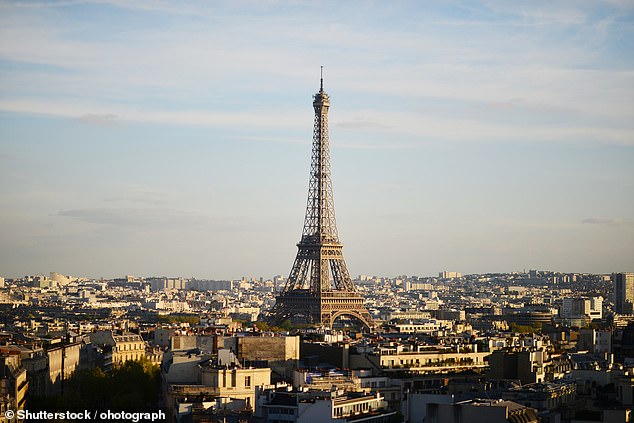 With the horrific exception of Notre Dame, it is astonishing how unchanged Churchill’s Paris is from the days when the Greatest Englishman fell in love with it

Eurostar (eurostar.com, 03432 186186) has up to 19 daily London to Paris services from £29 one- way. Andrew Roberts stayed at The Peninsula Paris (peninsula.com/paris); doubles from £729. More information at parisinfo.com.

Having written a biography of Napoleon back in 2014, it was a place that I know well, and love.

Churchill was awarded the Freedom of the City at the Hotel de Ville, on the northern bank of the Seine across from Notre Dame Cathedral.

‘Silent, mournful, abandoned, broken,’ Churchill said of Czechoslovakia after the Munich Agreement condemned that country to a painful death in 1938.

Three of those adjectives certainly apply to poor, sad, old Notre Dame today, though one can already see work starting on restoring her, or at least shoring up what has survived.

On receiving the Freedom of the City, Churchill was presented with a casket. When he opened it he expected to find a scroll, but instead it contained the Nazi flag that flew over the town hall during the Occupation.

An onlooker recalled: ‘The tears poured down his cheeks.’

With the horrific exception of Notre Dame, it is astonishing how unchanged Churchill’s Paris is from the days when the Greatest Englishman fell in love with it.

Which makes it such a rich experience for all of us.