Home buyers are being offered the chance to live like Wall Street movie tycoon Gordon Gekko in a property inspired by the iconic character’s Manhattan lair.

For £3.35million buyers can snap up the 2,653sq ft duplex apartment in The Glass Building on Arlington Road – which comes with an expansive rooftop terrace and sweeping views of the London skyline.

Designed by renowned award-wining Piers Gough CBE who has dubbed himself a ‘movie set architect’ the penthouse sits on the top floors of The Glass Building, built from 2000 to 2001, which is based on a series of interlocking bays with six storeys of curved facades created from slightly green-tinted floor-to-ceiling glass.

The glass walled Manhattan lair of Gordon Gekko, brilliantly played in 1987 and the 2010 sequel by Michael Douglas, was created by movie production designer Kristi Zea and set decorator Diane Lederman. 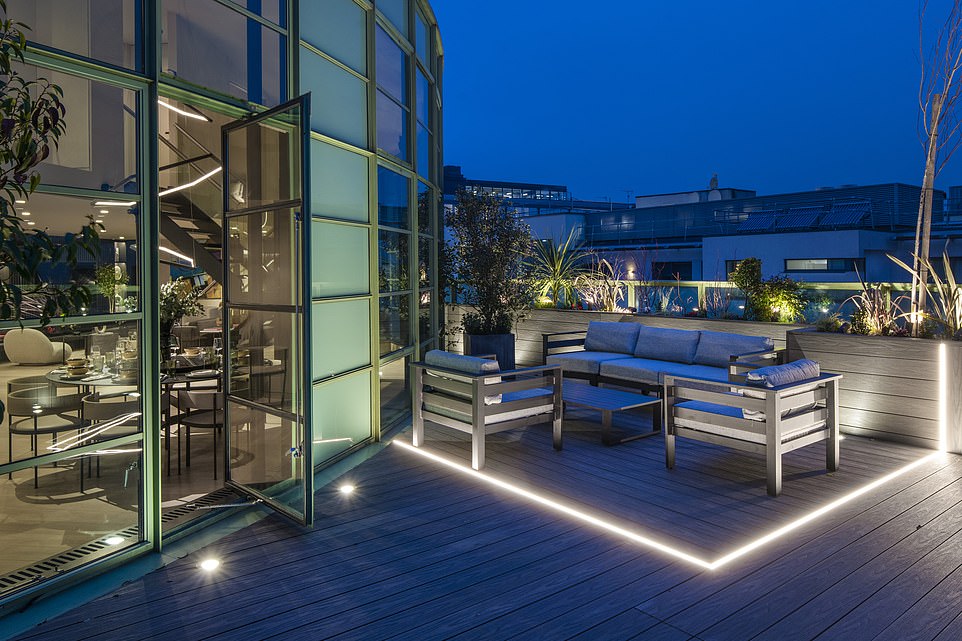 The private decked roof terrace, accessible from the kitchen-diner, has inbuilt floor lighting and offers sweeping views of the London skyline 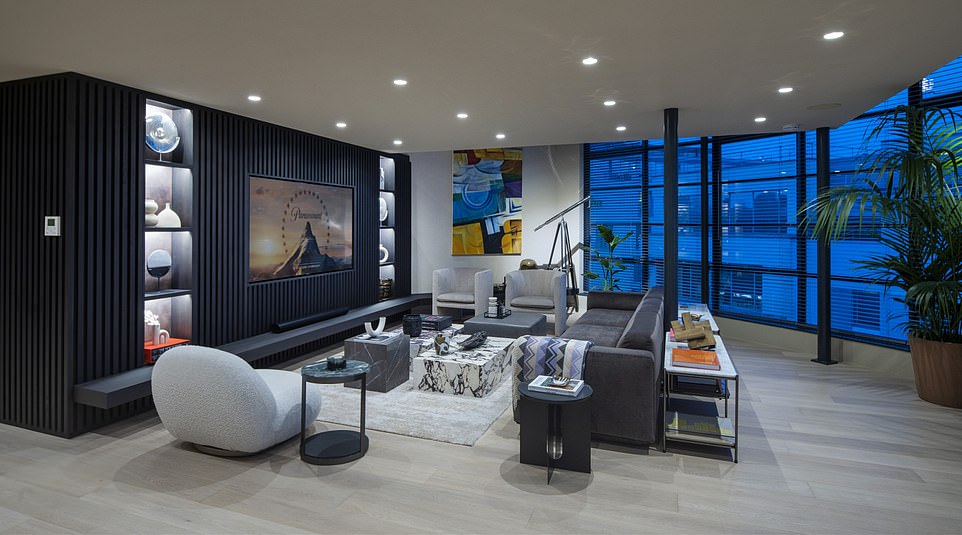 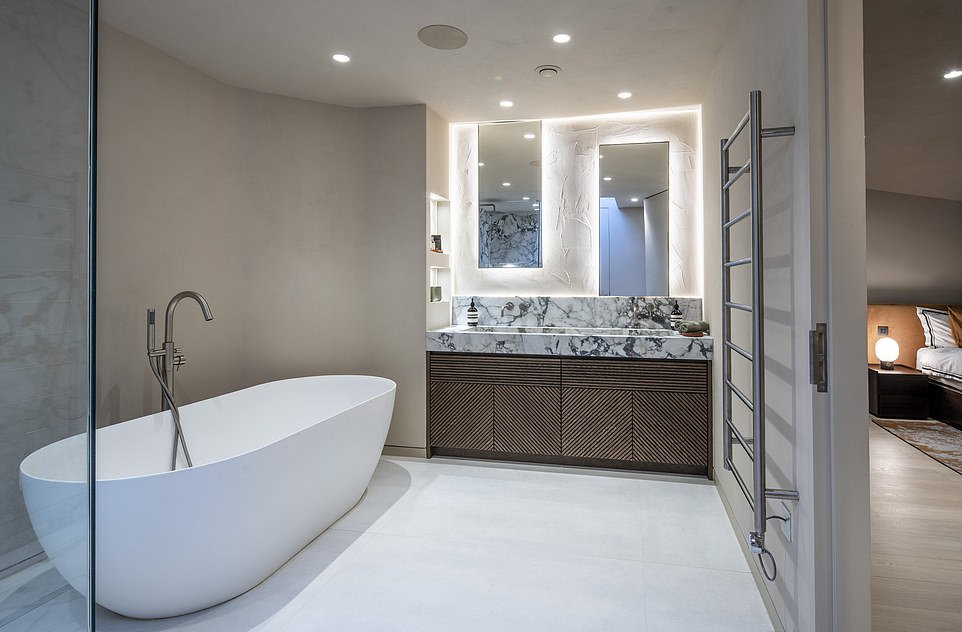 The ensuite bathroom off the principal suite has a standing bath tub and shower, and the master bedroom also boasts a dressing room

Kristi Zea described Gordon Gekko’s lair as a ‘wonderful, dramatic, understated and modern, a power and success statement for the owner’ and the same could be said of the Camden penthouse.

Mark Pollack, Co-Founding director of Aston Chase which is marketing the property, said: ‘The spectacular Manhattan style duplex penthouse in The Glass Building is one of the finest penthouses in the Camden, Regent’s Park and Primrose Hill area.’ 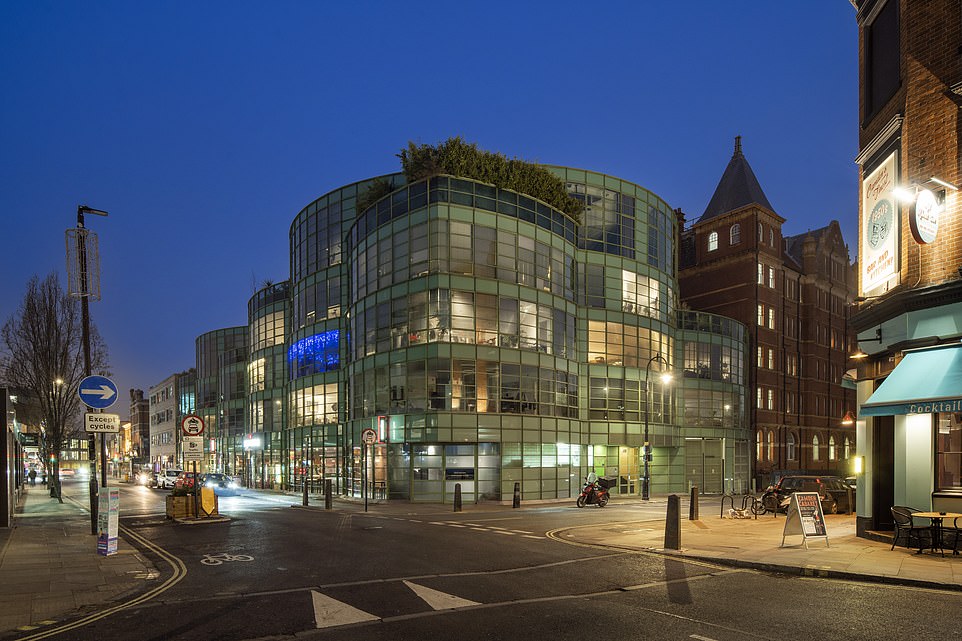 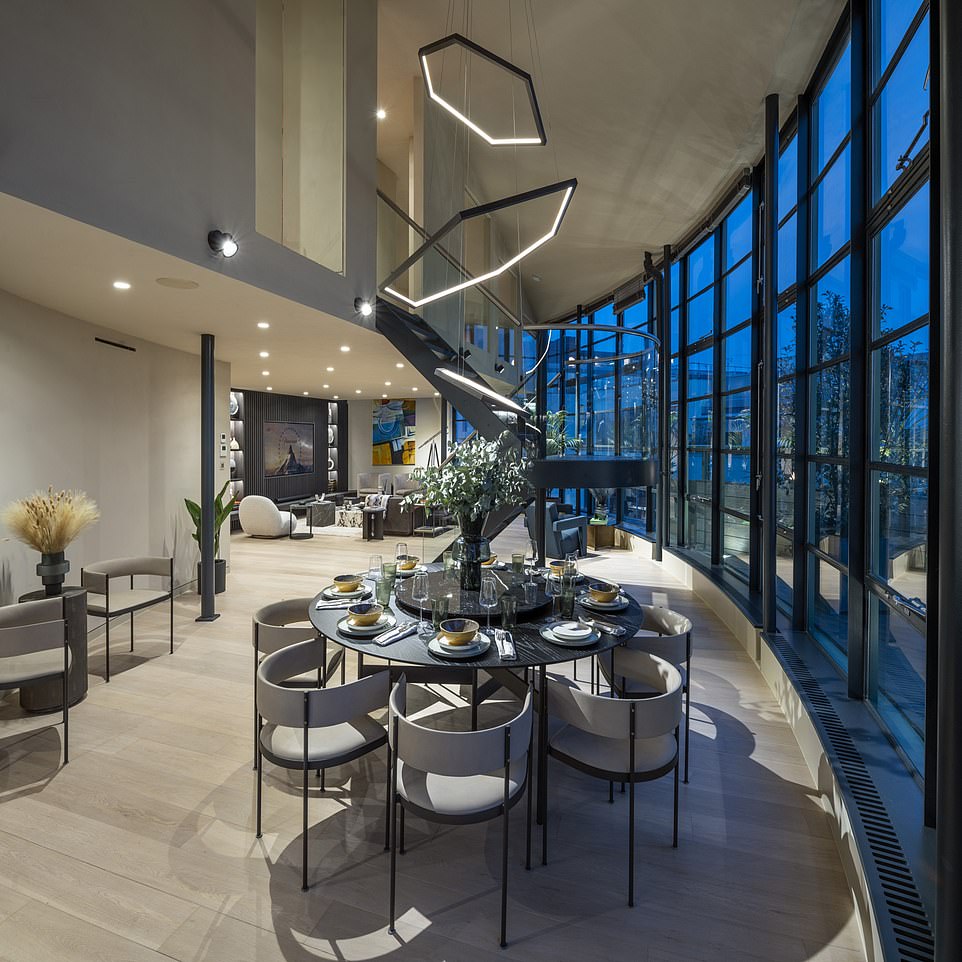 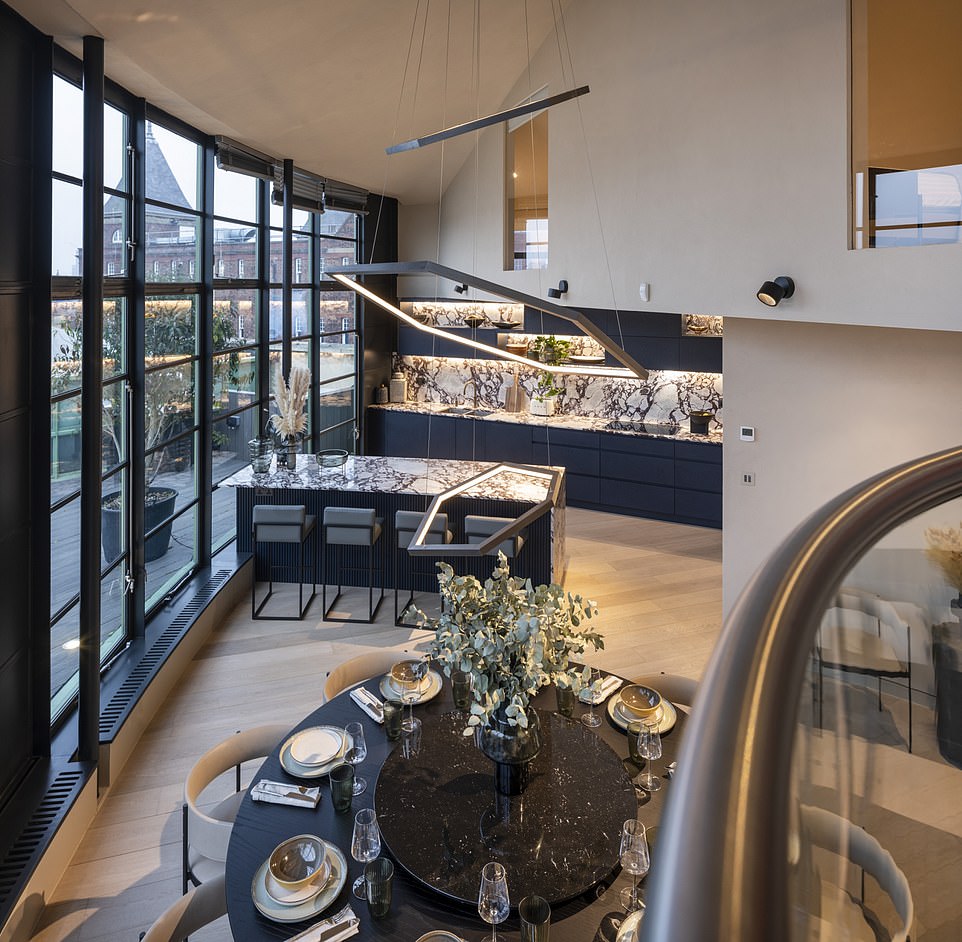 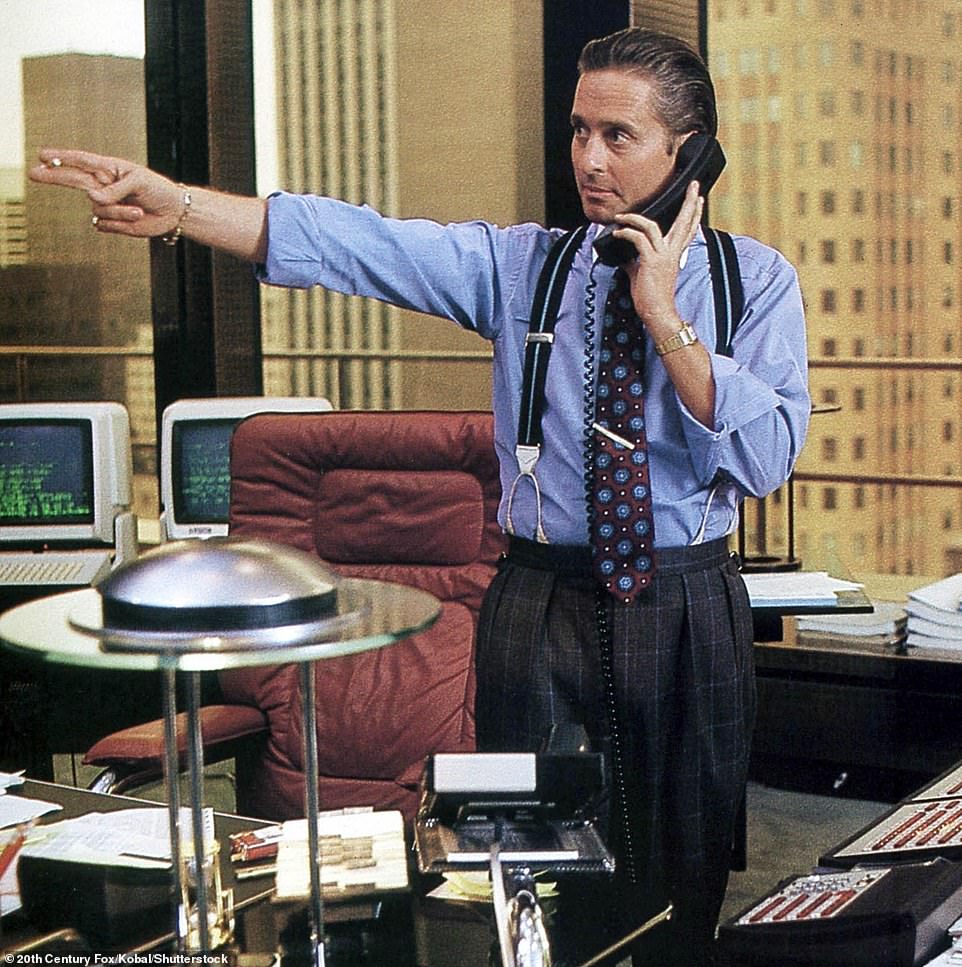 The curved facades of the penthouse are inspired by London’s gasometers.

Piers Gough, the postmodern architect, said: ‘The visual effect is of a series of curved bays coinciding with the curves of the apartment living spaces, a building that tries to be beautiful by being true to itself and its site.’

There is a fully-fitted designer kitchen-dining area with Calacutta viola marble worktops and Gaggenau, Miele and Fisher & Paykel integrated appliances.

The lower floor also has a bedroom with an ensuite shower room, as well as a utility room and guest cloakroom. 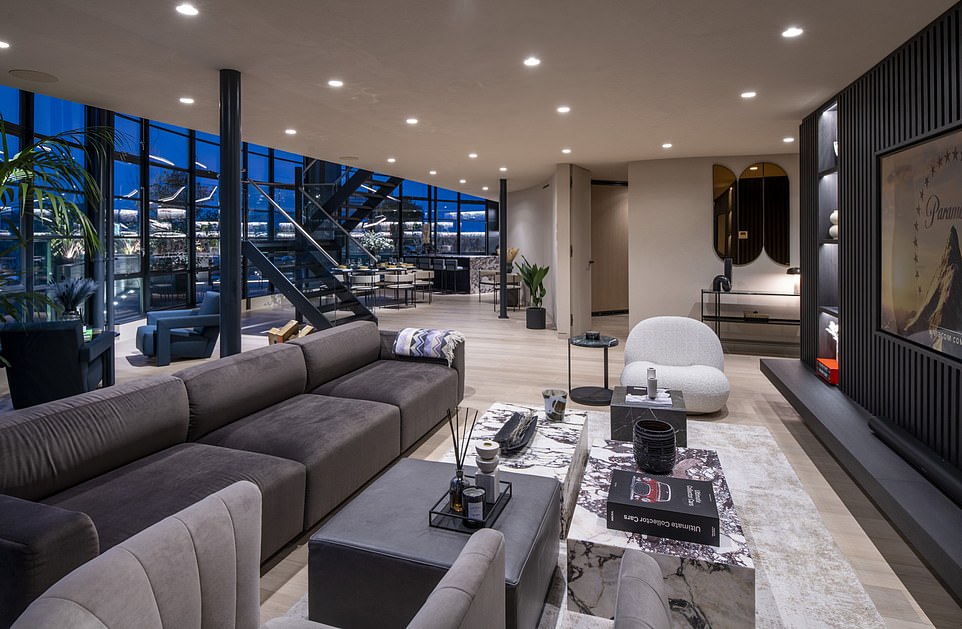 The large living space and bedrooms cover approximately 2,653sq ft in total with a guest cloakroom and utility room also on the lower floor 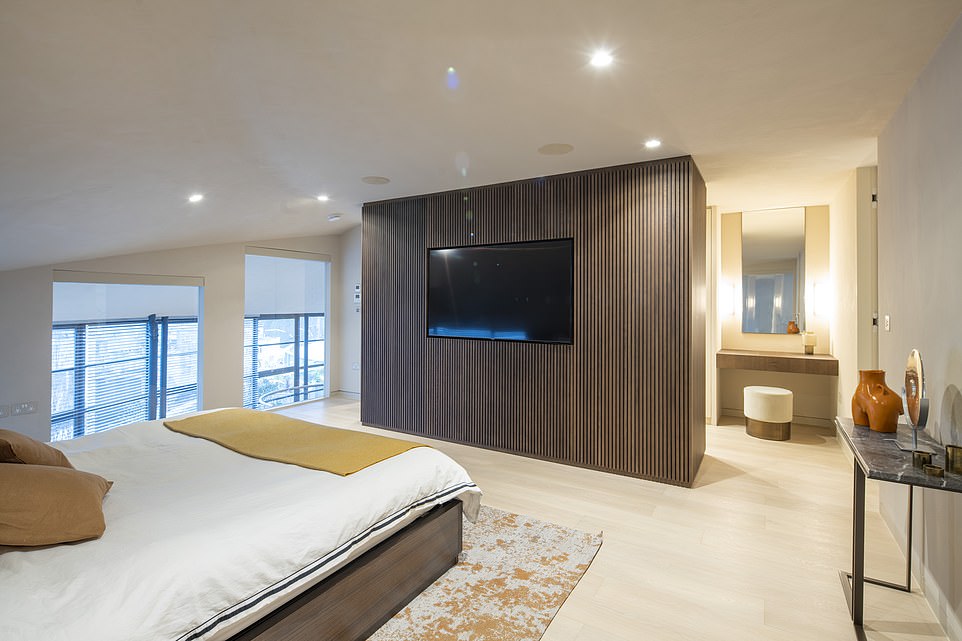 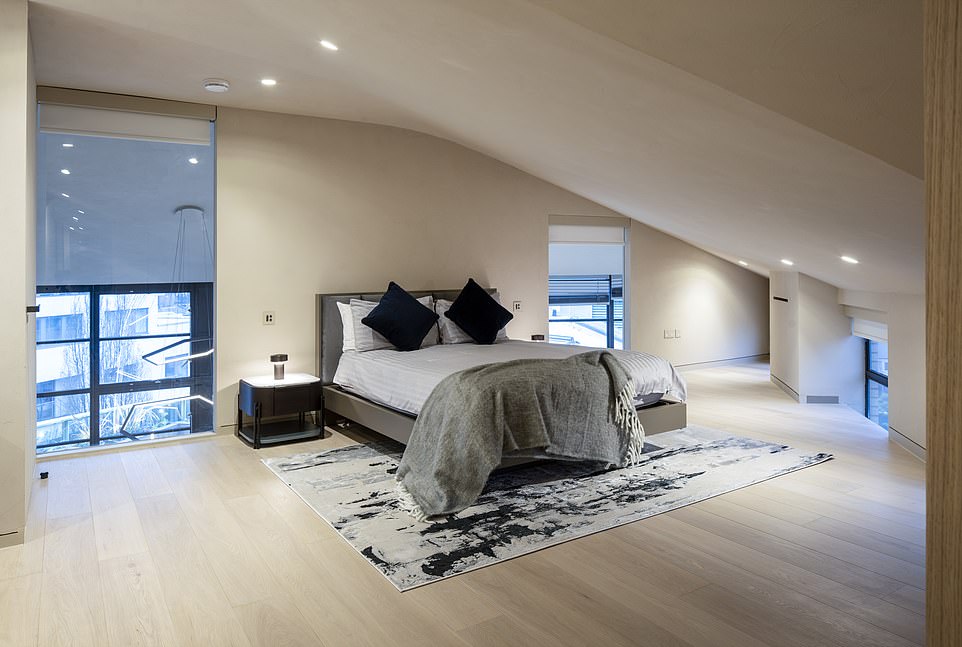 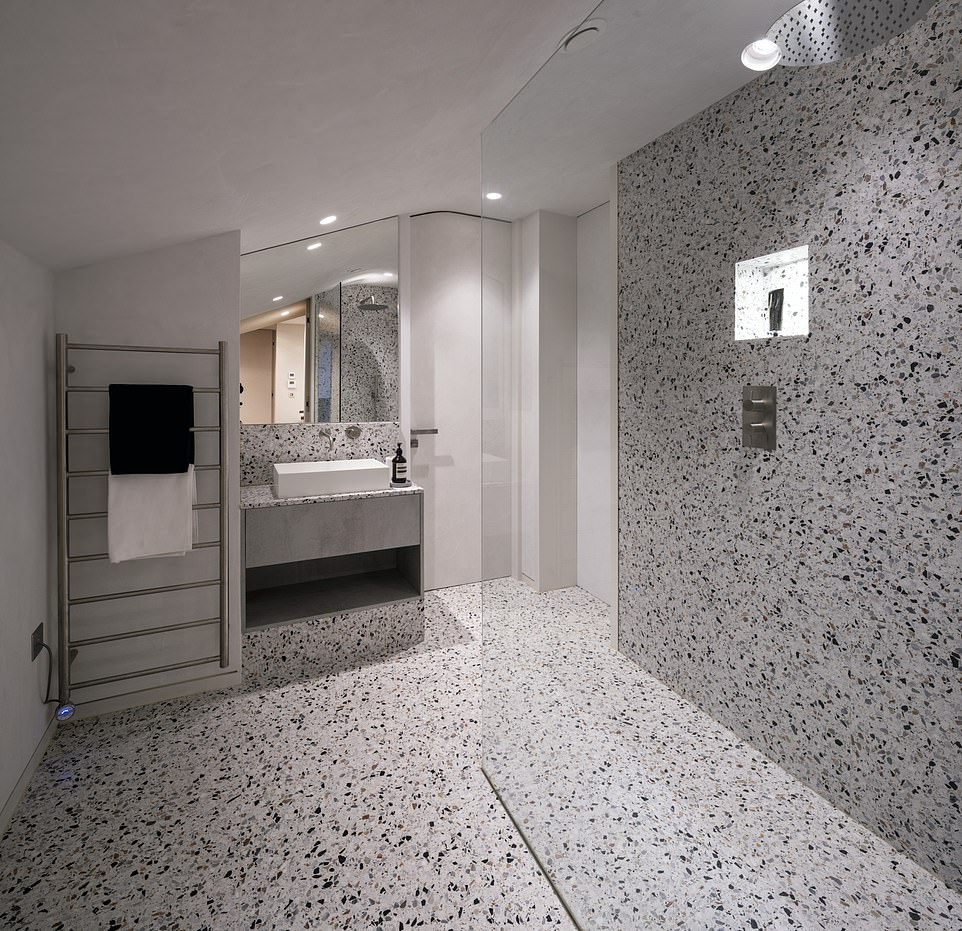 In the grand reception room a central steel staircase leads to the upper floor of the penthouse where there is a principal bedroom suite with a walk-in dressing room and principal bathroom – which has a freestanding bath tub and a marble shower with a skylight above.

There is also a guest suite on the upper floor with bespoke wardrobes and an ensuite bathroom.

Leading out from the open-plan kitchen-dining and living area, the expansive rooftop terrace has wooden decking and floor lighting and offers expansive views of the London skyline.

The penthouse has been finished to a high specification featuring an integrated Sonos sound/home entertainment system to principal rooms, a Rako home-automotion system and underfloor heating throughout in addition to a a full air-conditioning system.

The Glass Building has a stylish foyer with a day-time concierge service, a first floor landscaped podium garden and a gated underground car park which has an allocated parking bay for the penthouse. 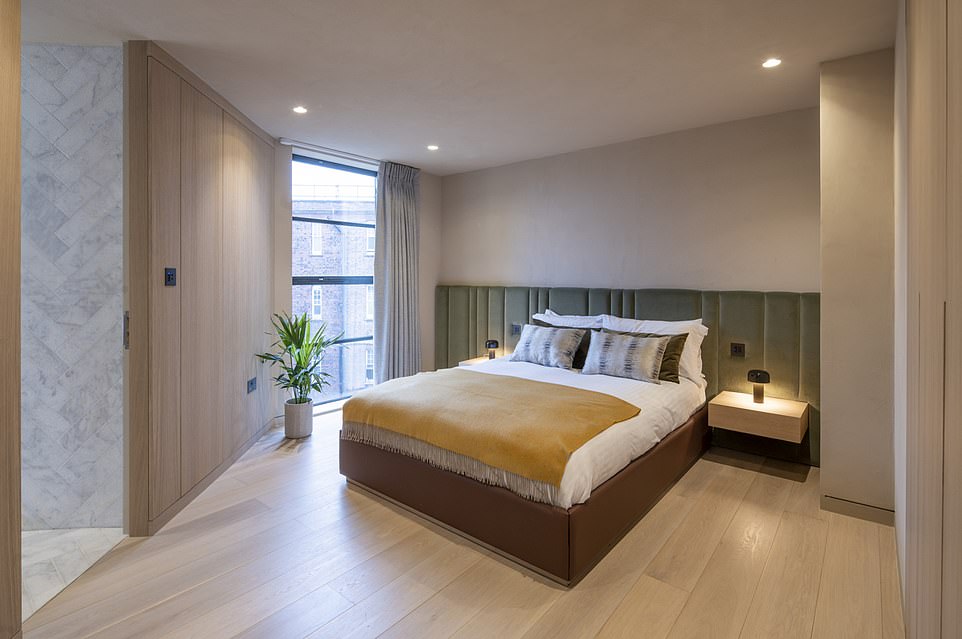 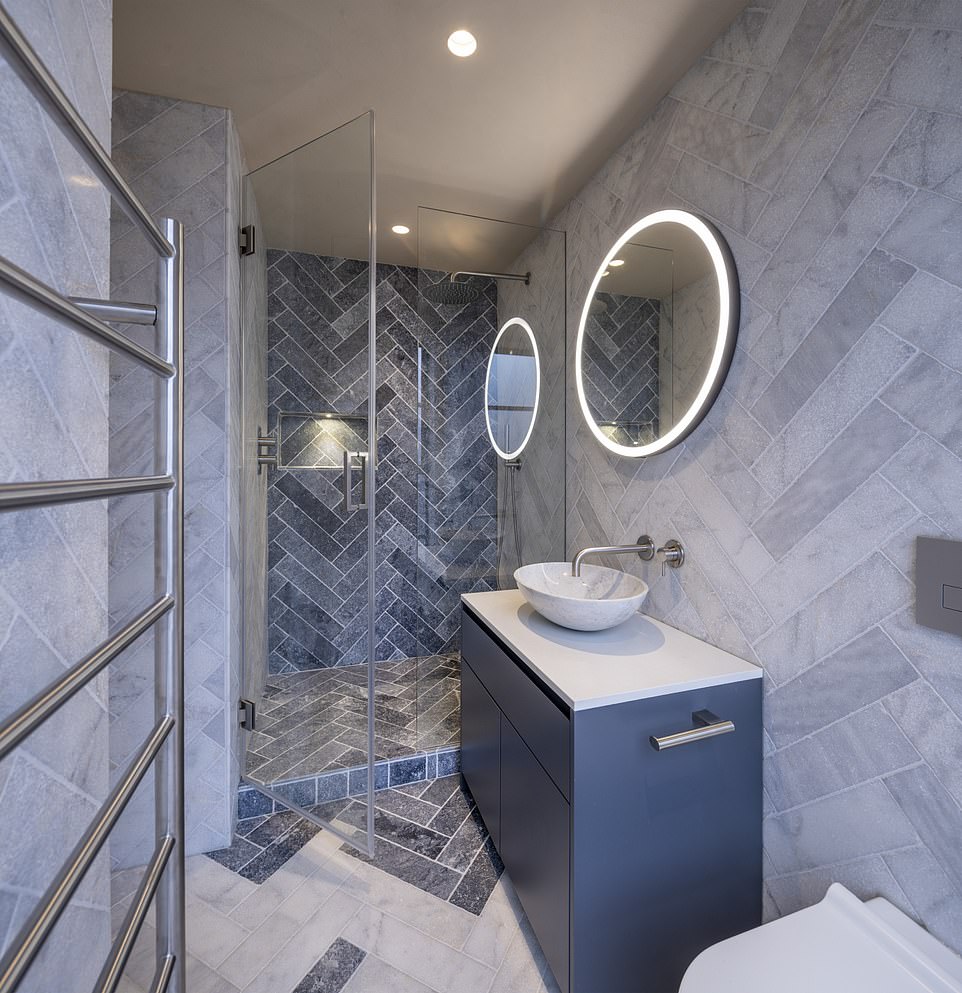