Wall Street suffered through a third consecutive day of large losses on Friday, capping off the US stock market’s worst weekly drop in a decade.

The Nasdaq Composite Index closed in a bear market for the first time since 2008 after falling 195 points, or 3 percent, to 6,332.

That total is down 21.9 percent from the index’s August 29 record closing high, exceeding the 20 percent decline considered the threshold for a bear market.

The Nasdaq is the first of the three major US stock indexes to cross that threshold, with its drop in less than four months serving as the latest sign that the bull market that began during the financial crisis a decade ago – the longest in history – could be almost done.

Meanwhile the benchmark S&P 500 index hit an 18-month low as it closed at 7 percent down at 2,416. The decline was led by big drops in former market favorites like Facebook and Amazon.

Across the board major US indexes are now 16 to 26 percent below the peaks they reached in the summer and early fall as investors fear a recession is on the way.

Barring huge gains during the upcoming holiday period, when trading is usually quiet, this will be the worst December for stocks since the 1930s.

The US stock market suffered a third consecutive day of large losses on Friday, capping off a brutal week on Wall Street. The Nasdaq Composite Index (above) closed in a bear market for the first time since 2008 after falling 195 points, or 3 percent, to 6,332 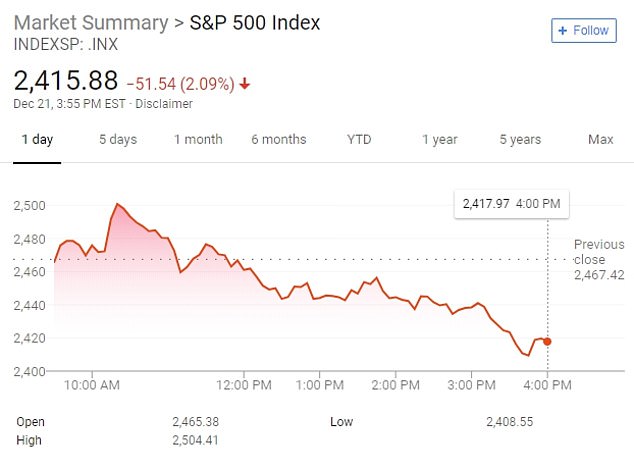 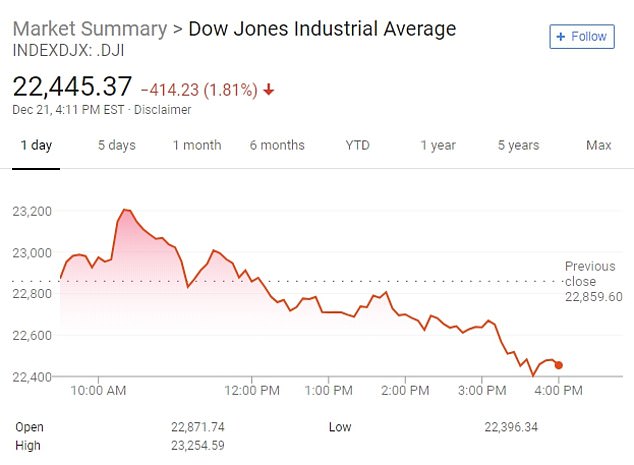 Analysts’ predictions of a volatile day for Wall Street held true on Friday as stock prices shot up early on before meandering into decline through the middle of the day.

Traders blamed the volatile prices on ‘quadruple-witching’ – when options on stocks and indexes as well as futures on indexes and single-stocks for the quarter all expire – which tends to raise volatility and trading volumes as investors replace expiring positions. 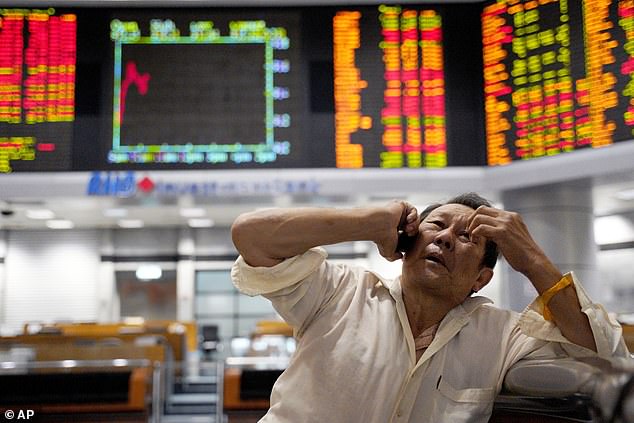 The Federal Reserve’s plan, announced Wednesday, to keep raising interest rates was an added headache for investors already fearful that trade wars and other geopolitical concerns would grind economic and corporate growth to a halt.

The US central bank’s view that the economy is strong will be tested amid a slew of economic data, including third-quarter GDP and November consumer spending, the Fed’s preferred measure of inflation.

Adding to the nerves was a chance that the government could be shut down unless President Donald Trump and Congress cut a deal before midnight on their long-running battle over funds for a Mexico border wall.

Volatility may rise again on Friday on account of ‘quadruple witching’, as investors unwind interests in futures and options contracts prior to expiration.

‘The indices are headed for another volatile, negative session as options expirations, turmoil in the White House and a renewed possibility of a partial government shutdown continue to shatter the nerves of investors,’ said Peter Cardillo, chief market economist at Spartan Capital Securities in New York. 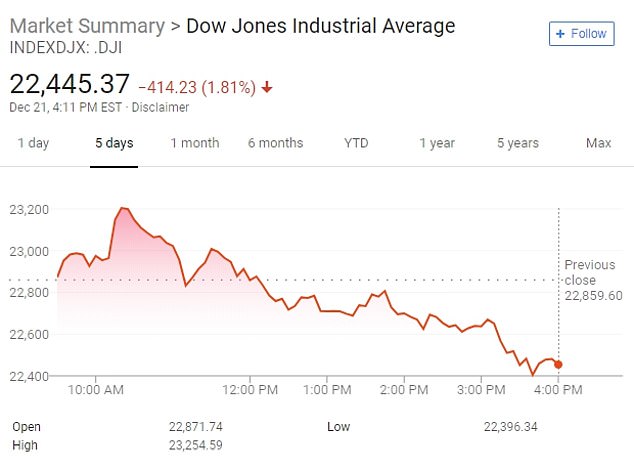 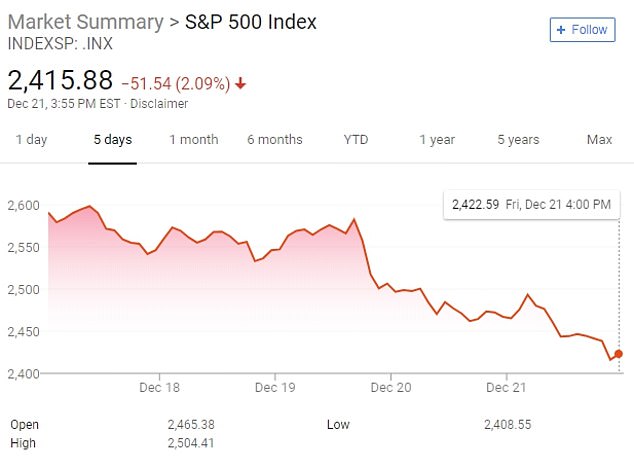 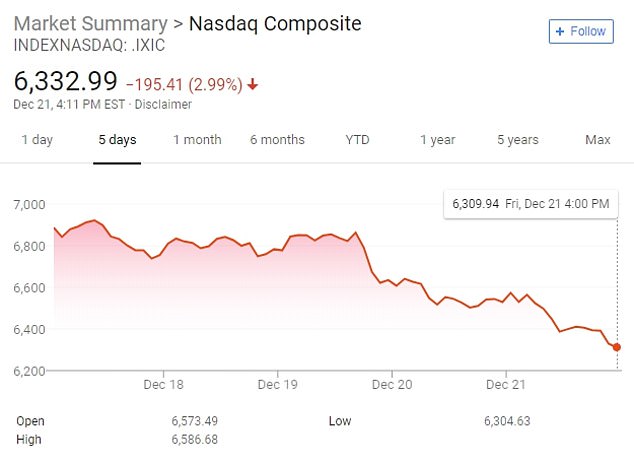 The Nasdaq has seen similar declines this week, almost closing in a bear market on Thursday

In premarket trading Friday, S&P 500 e-minis were down 0.57 percent at 7.30am Eastern, falling for the seventh session in a row, their longest losing streak since November 2011.

The three main Wall Street indices are already in correction territory, having fallen more than 10 percent from their record closing highs, and are closing in on bear market territory, when a security closes 20 percent below a recent high.

Reports released Friday morning revealed the US economy expanded at a solid 3.4 percent annual rate in the third quarter, slightly slower than the previous estimate as consumer spending and exports were revised lower. The economy is expected to slow further in the current quarter.

The Commerce Department says growth in the gross domestic product, the economy’s total output of goods and services, was revised down from an earlier estimate of 3.5 percent.

The still-strong performance followed a sizzling 4.2 percent advance in the second quarter and a moderate 2.2 percent increase in the first quarter.

Economists believe that economic growth is slowing in the fourth quarter to around 2.5 percent. But the overall GDP performance for the year will still be the best since 2005.