Folau somehow avoided a yellow card from referee Ben O’Keeffe for the incident, which inflamed tensions between the two sides just before halftime in Saturday’s Rugby Championship clash at the Free State Stadium.

Cheika also criticised O’Keeffe’s performance, saying the young Kiwi official got things wrong at ‘key moments’ – including missing a forward pass from Andries Coetzee in the lead-up to the penalty that could have sealed a win for South Africa, had Elton Jantjies not pushed it wide.

Leyds confirmed after the match that Folau ‘100 per cent’ pulled him by the hair twice.

But Cheika said it never happened, and seemed more concerned about Springbok captain Eten Etzebeth’s follow-up hit on Folau that nearly sparked an all-in brawl on the sidelines.

‘(Folau) grabbed the guy around the collar. OK, that’s a high tackle. I understand. That’s a penalty, I’m down with that,’ Cheika said.

‘Then (Etzebeth) comes in and doesn’t get him with the elbow, but it was angling that way.

‘We’re obviously listening to the fourth official. He’s saying nothing about the other guy coming in with the elbow raised up but he’s talking about our guy pulling someone’s hair.

‘He’s the captain of the other team. If he does (get him), what happens then?’ 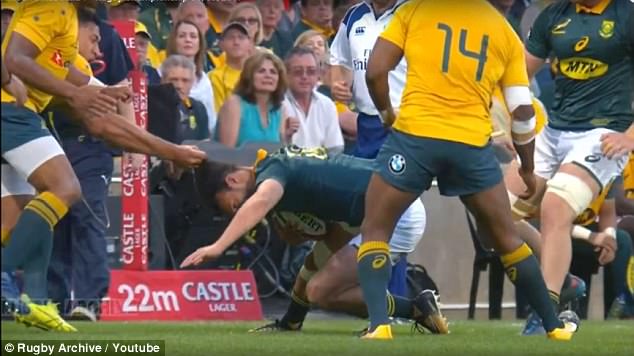 Wallabies coach Michael Cheika has denied the incident occurred, despite being caught on camera

When challenged on his version of events, Cheika told a South African reporter: ‘You’ve got to watch the vision. He got him by the collar.’

‘He didn’t come in and grab him by the hair. I don’t know, have you played rugby mate? Have you ever tackled anybody by the hair?

‘Exactly. Forget about it. It’s a non-issue.’

Etzebeth offered no comment while Springboks coach Allister Coetzee said he felt the referee dealt with it, and would be content with the outcome of any SANZAAR review if it determines further action is necessary. 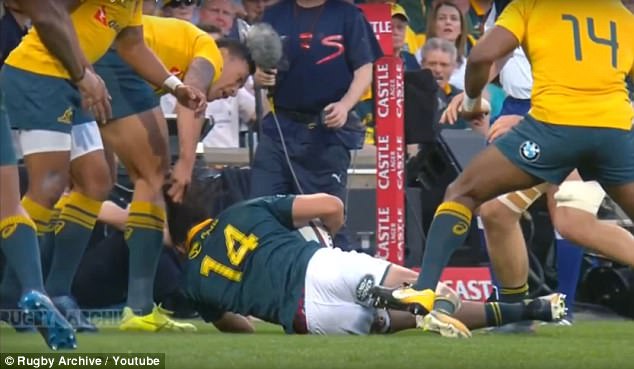 Cheika said he disagreed with O’Keeffe’s calls on multiple occasions.

‘Ben is going to be a great referee going forward, he’s got an excellent temperament,’ he said.

‘He’s only starting out in the Tier 1 matches but there was some forward passes, knock-ons and I suppose most disappointing for us, the goal that equalised the game, there’s no doubt that (Pieter-Steph) du Toit is offside into that ruck.

‘And then on the other side too, when Michael (Hooper) makes the tackle on Jantjies, he plays a second grab at the ball when he’s on the ground.

‘That’s a kick right in front with three minutes to go. These are key moments.’