An 82-year-old woman and trailblazing aviator is set to become the oldest person ever to go to space when she joins Jeff Bezos on Blue Origin’s first manned flight later this month.

Mary Wallace ‘Wally’ Funk will join Amazon boss Bezos, his brother Mark and the winner of an online auction as an ‘honored guest’ when they blast into orbit on the New Shepard rocket on July 20 – and in doing so will surpass former Senator John Glenn, who took a space shuttle flight in 1998 at the age of 77.

The trip is 60 years overdue for Funk, who was trained to be an astronaut in 1961 as part of the Mercury 13 – a group of 13 American women who underwent the same training as NASA’s Mercury 7 men but were not selected for a mission because of their gender.

Funk even scored higher than Glenn – who was one of the Mercury 7 astronauts chosen to fly on Project Mercury in the 1960s – on some astronaut testing.

The Mercury 13 ‘successfully underwent the same physiological and psychological screening tests as the astronauts selected by NASA for Project Mercury,’ Blue Origin said in an email. 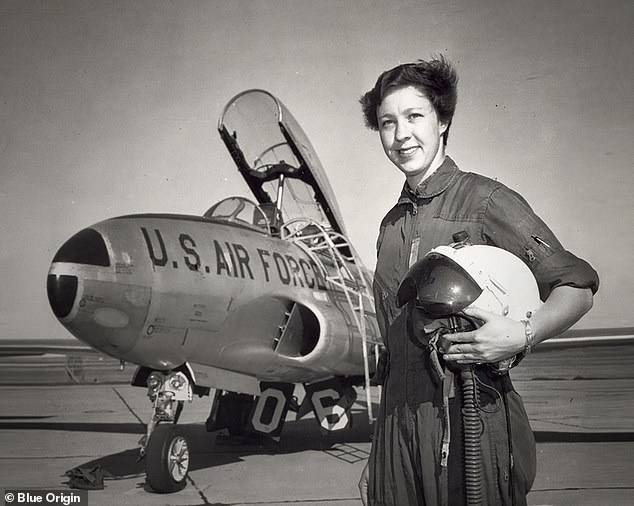 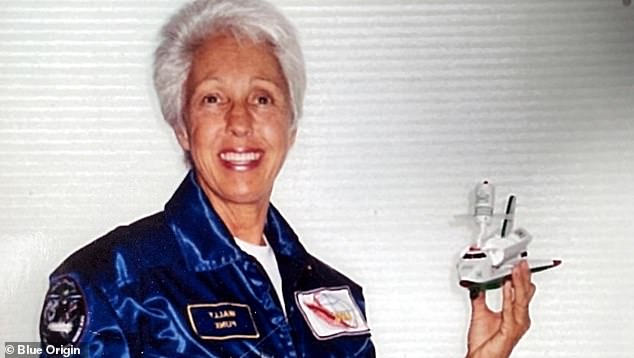 Funk was part of the ‘Mercury 13,’ 13 American women who ‘successfully underwent the same physiological and psychological screening tests as the astronauts selected by NASA for Project Mercury’ 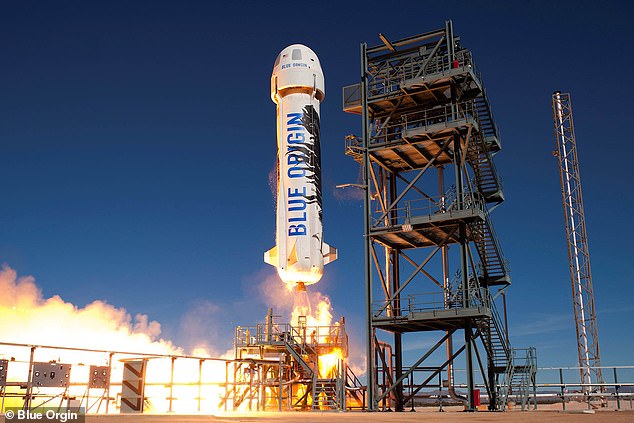 Funk will become the oldest person to fly to space when she heads into orbit on July 20, surpassing former Senator John Glenn, who did so at 77 years old in 1998 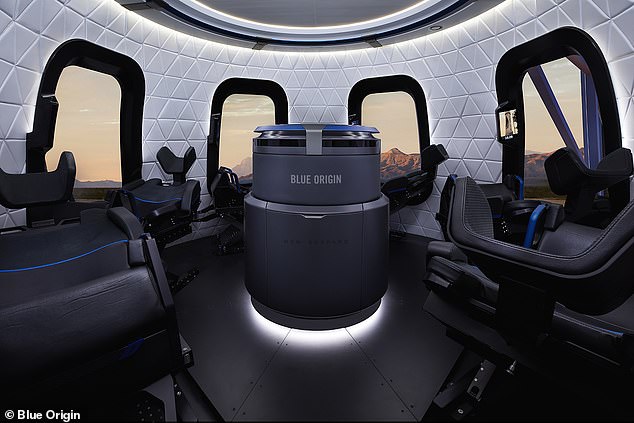 The New Shepard rocket will launch on July 20, the 51st anniversary of the Apollo 11 moon landing

Despite popular belief, the Mercury 13 were not an official part of NASA’s astronaut program and were part of a privately funded program.

But it spurred Funk to pressure US officials into allowing women into the space program.

In a video for Blue Origin, Funk recalled: ‘They told me that I had done better and completed the work faster than any of the guys.

So I got ahold of NASA, four times. I said I want to become an astronaut, but nobody would take me. I didn’t think that I would ever get to go up.’

She said people told her ‘Wally, you’re a girl, you can’t do that.’

‘I said guess what, doesn’t matter what you are, you can still do it if you want to do it.’

Although the 13 women never flew to space, they did testify before Congress in the early 1960s to criticize NASA for not including women as astronauts.

It wasn’t until 1978 that NASA selected 35 astronauts, including the first six women, for the Space Shuttle Program.

Bezos, 57, broke the news to Funk personally that she would be joining him on the trip.

The video shows Bezos describing the flight to Funk, and then asking her what would be the first thing she said after landing.

‘I would say, ‘Honey, that was the best thing that ever happened to me!” replies an exuberant Funk, throwing her arms around the laughing tech mogul.

The passengers will spend four minutes above the Karman line that marks the recognized boundary between Earth’s atmosphere and space. 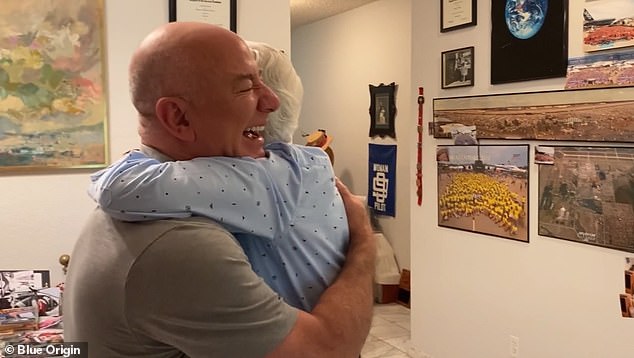 Bezos, 57, told Funk personally, who upon hearing the news, said ‘Honey, that’s the best thing that’s ever happened to me’ 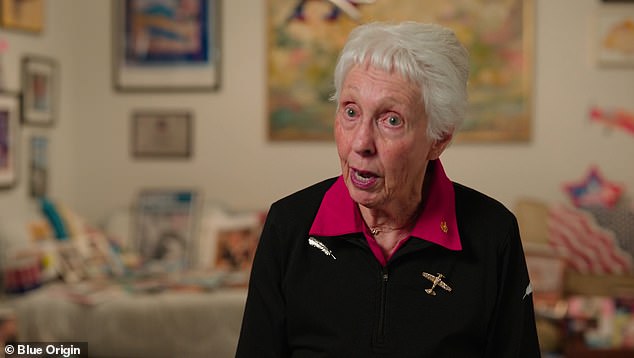 Among Funk’s impressive achievements, she was the first female FAA inspector and first female NTSB air safety investigator in history 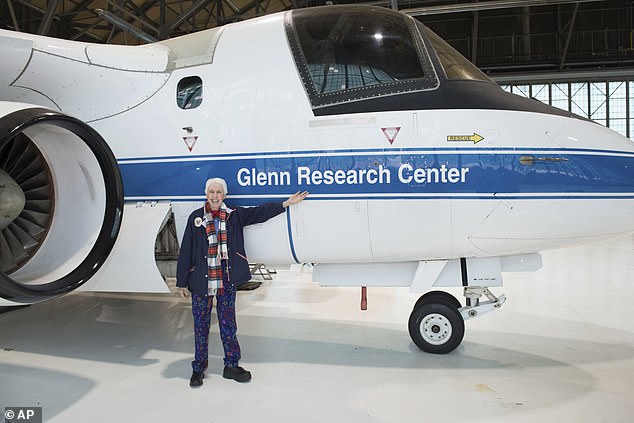 In this 2019 photo from NASA, Wally Funk (pictured) visited the Glenn Research Center at Lewis Field in Cleveland, Ohio 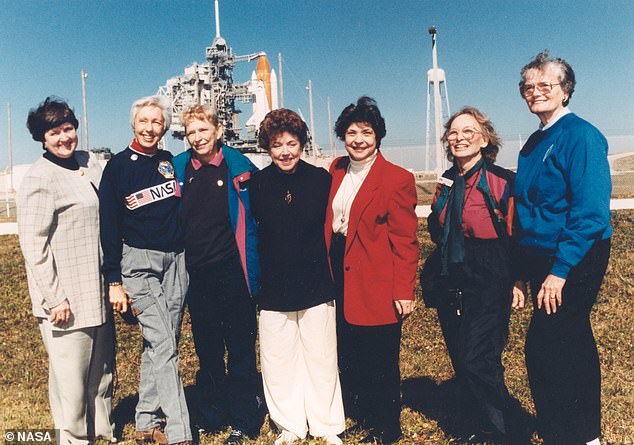 In addition to being part of the Mercury 13, Funk, who never married, has an extraordinarily impressive background.

At 20, she became a professional aviator, working as a civilian flight instructor at Fort Sill, Oklahoma.

She became the 58th US woman to earn an Airline Transport Rating in 1968. She tried three times to get a job with commercial airlines, but was turned away because of her gender.

After NASA started accepting women to be astronauts in the 1970s, Funk applied three times but she was denied, as she did not have an engineering degree or a background as a test pilot.

On the July 20th flight, she will join Bezos, his brother Mark and the winner of last month’s auction, who paid $28 million for a seat onboard the first crewed spaceflight.

They are gradually moving from suborbital to orbital flight in an incremental way and will launch humans to space on July 20.

Bezos will be on that first crewed flight along with his brother Mark, the winner of the auction, and three members of Blue Origin staff.

Bezos has announced they are also working on New Armstrong, after the first man on the Moon, Neil Armstrong, although no details have been revealed.

The identity of the top bidder is not yet known and will likely be announce shortly before the flight, experts have said.

The launch – which coincides with the 51st anniversary of the moon landing – will be the first test of Blue Origin’s New Shepard rocket with people on board, kicking off the company’s space tourism business.

Bezos, the world’s wealthiest man and a lifelong space enthusiast, has been racing against fellow billionaires Richard Branson and Elon Musk to be the first of the three to travel beyond Earth’s atmosphere.

The space race is fueled by optimism that space travel will become mainstream as nascent technology is proven and costs fall, fueling what UBS estimates could be a $3 billion annual tourism market by 2030.

UBS says that long-haul travel market could be worth more than $20 billion, though several barriers such as air-safety certification could derail the plans.

Morgan Stanley analyst Adam Jonas said: ‘Putting the world’s richest man and one of the most recognized figures in business into space is a massive advertisement for space as a domain for exploration, industrialization and investment.’

Blue Origin has not divulged its pricing strategy for future trips.

In 2018 that Blue Origin was planning to charge passengers at least $200,000 for the ride, based on a market study and other considerations, though its thinking may have changed.

The other three passengers on the New Shephard flight are Sian Proctor, a community college educator in Arizona, Chris Sembroski, a former Air Force missileman from Washington, and Hayley Arceneaux, a physician assistant at St. Jude Children’s Research Hospital in Tennessee.

The six passengers will spend at least 10 minutes floating in zero gravity inside the capsule during the suborbital sightseeing trip.

Blue Origin named the New Shepard program after astronaut Alan Shepard, who was the first American to fly into space exactly 60 years ago.

Washington state-based Blue Origin is largely self funded by Bezos, who has been selling over $1 billion worth of stock in Amazon per year to fund the company.

Amazon founder Bezos looks set to be the first of the three to fly to space, having announced plans to launch aboard his space company Blue Origin’s New Shepard spacecraft on July 20.

The billionaire mogul will travel with his younger brother Mark, a former advertising executive and volunteer firefighter, and the winner of Saturday’s multi-million pound auction.

However, a report has suggested Branson might beat him to it, by making a suborbital flight two weeks before Bezos and his brother. The suggestion is the Virgin Galactic founder would travel on his VSS Unity SpaceShipTwo rocket plane on the July 4 weekend.