Walmart’s shelf-scanning robots have started picking up shifts in some California stores.

The six-foot-tall robots come with a tower that tower that is fitted with cameras that scan aisles to check stock and identify missing and misplaced items, as well as incorrect prices and mislabeling.

The robots pass that data to store employees, who then stock the shelves and fix errors.

A Walmart in Milpitas, Calif. is currently testing the robot, but Walmart also has plans to roll them out to 50 more U.S. stores sometime soon.

The approximately 2-foot (0.61-meter) robots come with a tower that is fitted with cameras that scan aisles to check stock and identify missing and misplaced items, incorrect prices and mislabeling

Two locations in San Jose, Calif. are also testing the robots, in addition to a handful of stores in Arkansas and Pennsylvania.

Out-of-stock items are a big problem for retailers since they miss out on sales every time a shopper cannot find a product on store shelves.

But the autonomous robots are able to clear one aisle every 90 seconds, which is a fraction of the time it would take for a human to complete the task.

That’s why some shoppers are afraid that the robots could be coming after human jobs.

‘But if it isn’t taking somebody’s job, if it’s gonna do benefits for Walmart, then it would be good,’ she added.

‘If you are running up and down the aisle and you want to decide if we are out of Cheerios or not, a human doesn’t do that job very well, and they don’t like it,’ Jeremy King, chief technology officer for Walmart U.S. and e-commerce, told Reuters.

The robots are 50 percent more productive than their human counterparts and can scan shelves significantly more accurately and three times faster, King said.

The robots can travel at about 7.9 inches a second, or roughly 0.45 miles an hour, according to the Mercury News.

Store employees only have time to scan shelves about twice a week.

WHAT IS LIDAR TECHNOLOGY AND HOW DOES IT WORK?

Lidar is a remote sensing technology that measures distance by shooting a laser at a target and analysing the light that is reflected back.

The technology was developed in the early 1960s and uses laser imaging with radar technology that can calculate distances.

It was first used in meteorology to measure clouds by the National Center for Atmospheric Research.

The term lidar is a portmanteau of ‘light and ‘radar.’

A narrow laser beam can be used to map physical features with very high resolution.

This new technique allowed researchers to map outlines of what they describe as dozens of newly discovered Maya cities hidden under thick jungle foliage centuries after they were abandoned by their original inhabitants.

Aircraft with a LiDAR scanner produced three-dimensional maps of the surface by using light in the form of pulsed laser linked to a GPS system.

‘Now it is no longer necessary to cut through the jungle to see what’s under it,’ said Marcello Canuto, one of the project’s top investigators.

Bossa Nova, the startup behind the robots, said the devices are very similar to a self-driving car.

The robots use LIDAR, or light detection and ranging, sensors and other video cameras to help them see.

These systems are often used in autonomous vehicles to help them ‘see’ their surroundings and navigate objects more precisely.

The idea of installing robots to automate retail is not new. Rival Amazon.com Inc uses small Kiva robots in its warehouses to handle picking and packing, saving almost 20 percent in operating expenses.

For Wal-Mart, the move is part of a broader effort to digitize its stores to make shopping faster. 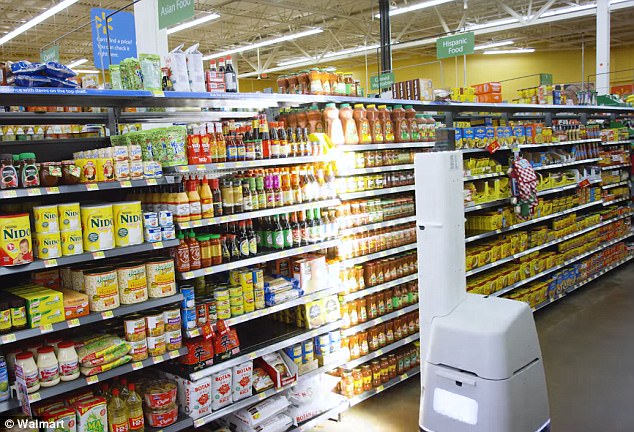 Out-of-stock items are a big problem for retailers since they miss out on sales every time a shopper cannot find a product on store shelves. Wal-Mart, the world’s largest retailer has been testing shelf-scanning robots in a handful of stores in Arkansas, Pennsylvania and California

In the past year, it has installed giant ‘pickup towers’ that operate like self-service kiosks and where customers can pick up their online orders.

The company has also speeded up the checkout process by allowing customers to scan their own purchases, and it has digitized operations like pharmacy and financial services in stores.

IS WALMART LOOKING INTO DRONE BLIMPS TO DELIVER PACKAGES?

Walmart was granted a patent for blimps that would serve as airborne bases for fleets of delivery drones.

A carrier compartment would house packages and drones and communicate with a scheduling system to deploy deliveries.

The patent is similar to one filed last year by Amazon, indicating tensions are heating up between the two companies competing to dominate e-commerce. Walmart has been granted a patent for ‘gas-filled carrier aircrafts’ that would serve as airborne bases for fleets of delivery drones. It strikes similar to the one filed last year by Amazon