Sykes, a consulting producer for Barr’s eponymous ABC show, tweeted on Tuesday: ‘I will not be returning to @RoseanneOnABC’.

Barr has come under fire after she tweeted that Jarrett looked like the ‘Muslim brotherhood & planet of the apes had a baby’.

Sykes, a consulting producer for Barr’s eponymous show on ABC, revealed the news on Twitter 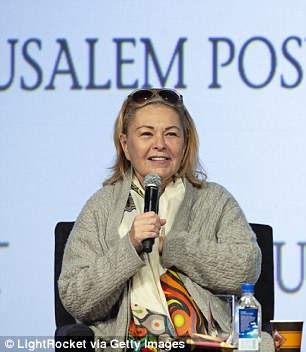 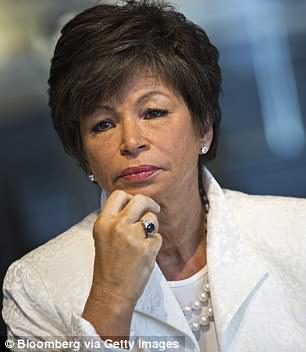 Roseanne’s mention of the ‘Muslim brotherhood’ seems to be due to the long-running conspiracy theory that Jarrett is Muslim.

Jarrett was born in Iran to American parents and lived in Shiraz for six years.

Barr later claimed the comment was a ‘joke’ when she was called out on Twitter by CNN reporter Andrew Kaczynski. 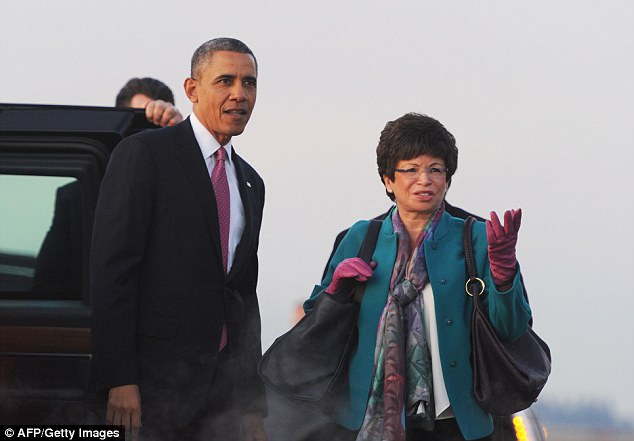 Roseanne’s mention of the ‘Muslim brotherhood’ seems to be due to the long-running conspiracy theory that Jarrett is Muslim, despite there being no supporting evidence 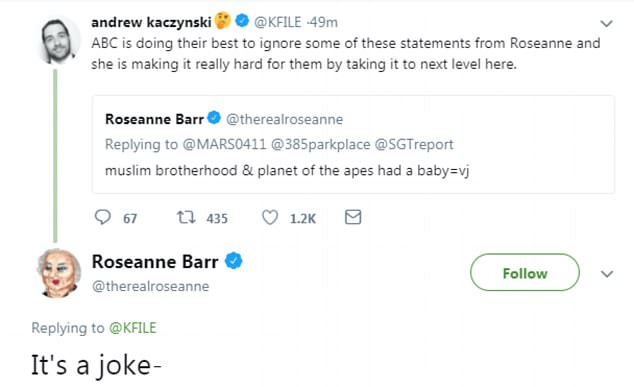 When one user called Barr’s tweet racist, she proclaimed that ‘Muslims r NOT a race’

Roseanne later tweeted, in an attempt to defend her controversial joke, that ‘Islam is not a race’ 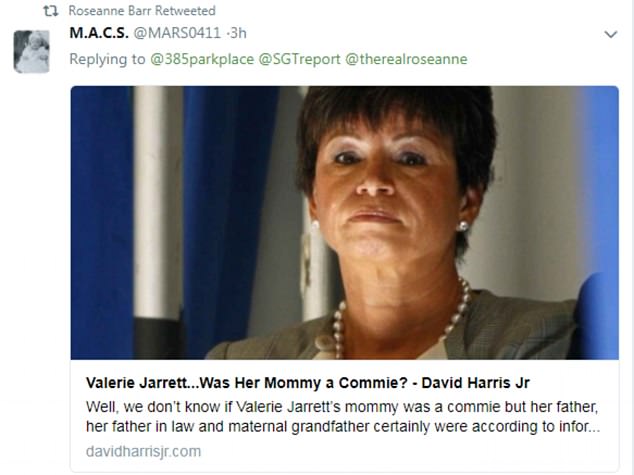 She also retweeted an article with the headline: ‘Valerie Jarrett…was her mommy a Commie?’

‘ABC is doing their best to ignore some of these statements from Roseanne and she is making it really hard for them by taking it to the next level here,’ he wrote.

After Roseanne responds, Kaczynski replied: ‘understand it’s a joke, but can you see why some people think comparing a black woman to Planet of the Apes might be racist and find the Muslim Brotherhood reference to be conspiratorial and Islamophobic?’

A number of celebrities have since condemned Barr for the tweet, with some urging ABC to fire her.

‘I am repulsed that Valerie Jarret had that racist and bigoted ‘joke’ made at her expense and I am sickened that any Black or Muslim person has to keep hearing this sickness in 2018,’ Patricia Arquette tweeted. 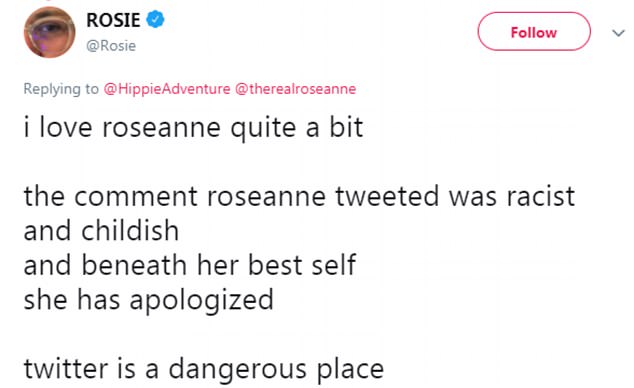 A number of stars have since condemned Barr for the tweet, including Patricia Arquette and Julianne Moore. Rev Al Sharpton used ABC to fire Barr, while Rosie O’Donnell defended her

‘You can take @RoseanneOnABC out of racism but you can’t take the racism out of @therealroseanne,’ Don Cheadle wrote.

‘I told y’all about Roseanne. I told you. So,’ author Roxane Gay added, to which Julianne Moore replied: ‘Yes you did. #FireRoseanne.’

‘The comparison by Rosanne Barr on ABC of Former Obama aide, Valerie Jarrett to an APE is racist and inexcusable,’ he tweeted.

Only Rosie O’Donnell appeared to lend some support to Roseanne, writing that she loved her ‘quite a bit’.

‘The comment Roseanne tweeted was racist and childish and beneath her best self,’ O’Donnell wrote. 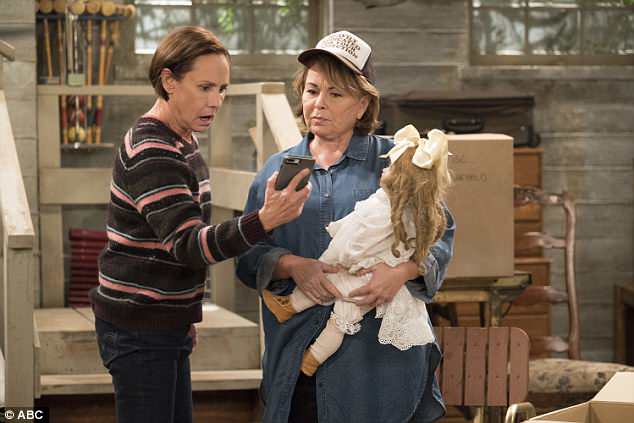 About an hour later, Roseanne apologized to Jarrett and said she was leaving Twitter

‘You’re a racist pig & ABC should be ashamed that they give you a platform,’ another added.

Roseanne later tweeted, in an attempt to defend herself, that ‘Islam is not a race’.

‘Islam includes EVERY RACE of people,’ she added, still without acknowledging the fact that there is no evidence Jarrett has ties to the Islamic faith.

She also retweeted an article whose headline read: ‘Valerie Jarrett…was her mommy a Commie?’

About an hour later, Roseanne apologized and said she was leaving Twitter.

‘I apologize to Valerie Jarrett and to all Americans,’ she wrote in a separate tweet.

‘I am truly sorry for making a bad joke about her politics and her looks. I should have known better. Forgive me-my joke was in bad taste.’ 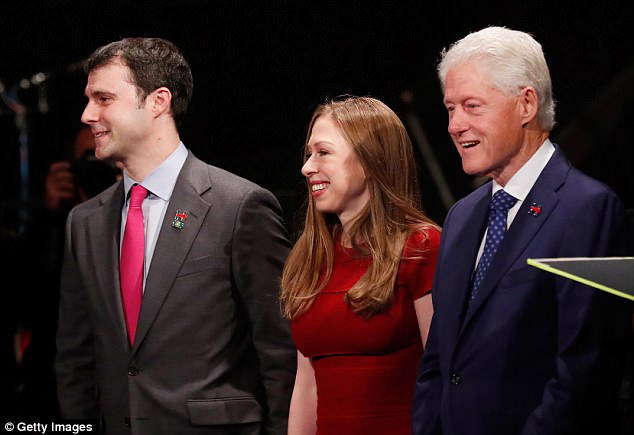 Jarrett’s faith wasn’t the only conspiracy theory Barr tried to push on Tuesday. She also claimed that Chelsea Clinton was married to the nephew of George Soros. Clinton is married to Mark Mevisnky (pictured) 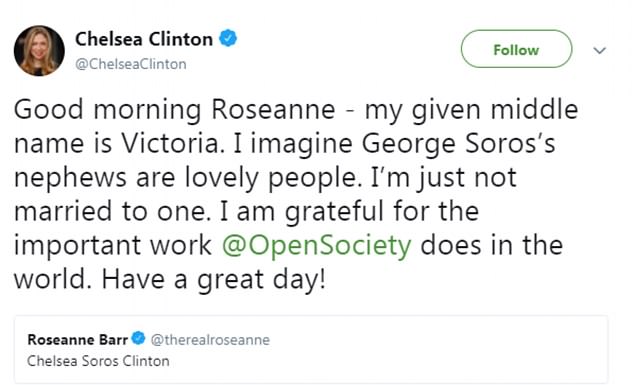 Chelsea Clinton herself was quick to shoot down the rumor, which was first propagated by actor and Trump supporter Scott Baio in 2016

Jarrett’s faith wasn’t the only conspiracy theory Barr tried to push on Tuesday.

The comedian also claimed that Chelsea Clinton was married to the nephew of George Soros, a rumor that was propagated by actor Scott Baio in 2016. 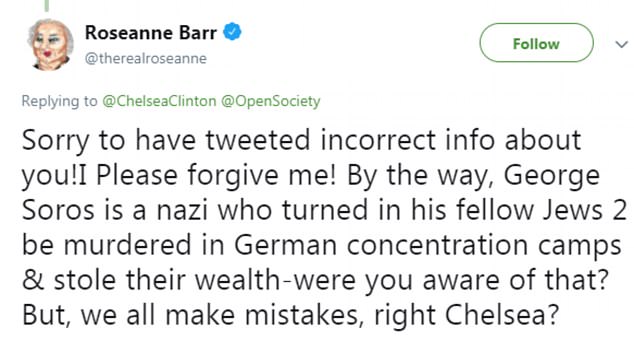 Barr sent two tweets apologizing to Clinton, which would be her first – but not last – apologies of the day during the Twitter rant

But Chelsea Clinton herself was quick to respond to Barr, writing: ‘Good morning Roseanne – my given middle name is Victoria. I imagine George Soros’s nephews are lovely people. I’m just not married to one.’

Barr first apologized to Clinton directly, tweeting: ‘Sorry to have tweeted incorrect info about you! Please forgive me!’

In a separate tweet, Barr wrote: ‘I’m sorry-Chelsea Clinton IS NOT married to a nephew of George Soros-i apologize for the mistake!’

It would be the first, but not the last, apology Barr would have to give that day.