Want cleaner air in your home? Researchers modify common houseplant to remove toxins from your rooms

A houseplant has been modified by scientists to clean the air inside the house of hazardous particles.

Air filters do not keep smaller molecules, including chloroform and benzene, which have both been linked to cancer, at bay.

Pothos ivy was edited in the laboratory to have the power to remove these molecules in the air and use them as food to grow.

When the plants were put in a glass tube filled with polluted air, the concentrations dropped significantly over the next few days, being almost undetectable.

However, the team at the University of Washington said a good flow of air was needed in a room for the particles to reach the plants’ leaves.

A houseplant, pothos ivy, has been modified by scientists at the University of Washington to clean the air inside the house of hazardous particles not controlled by air filters 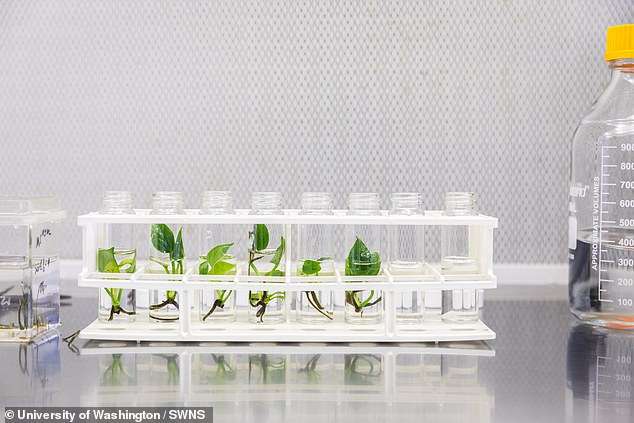 Researchers tested the modified ivy’s ability to remove pollutants in the air compared with normal ivy. Concentrations in the glass tubes with the modified ivy dropped significantly over the next few days, being almost undetectable 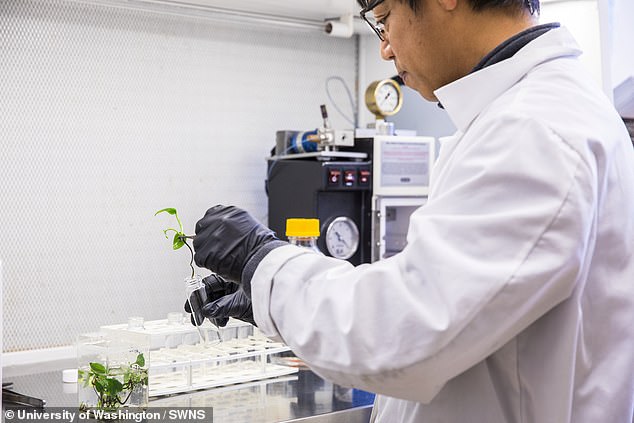 Dr Long Zhang, pictured in the lab, who is a research scientist in the civil and environmental engineering department, said they used pothos ivy as it is a robust plant

Chloroform is present in small amounts in chlorinated water, and benzene, which is a component of gasoline, and therefore from exhaust fumes, can build up in homes when people shower or boil water.

Study senior author Professor Stuart Strand said: ‘People haven’t really been talking about these hazardous organic compounds in homes, and I think that’s because we couldn’t do anything about them.

‘Now we’ve engineered houseplants to remove these pollutants for us.’

The team modified the plants to express a protein called cytochrome P450 2E1, or 2E1 for short, which can be found in the human liver.

Professor Strand said: ‘We decided we should have this reaction occur outside of the body in a plant, an example of the ‘green liver’ concept.

‘And 2E1 can be beneficial for the plant, too. Plants use carbon dioxide and chloride ions to make their food and they use phenol to help make components of their cell walls.’

The researchers made a synthetic version of the gene and introduced it into pothos ivy – which the team used for its ability to be versatile in many conditions.

Study lead author Dr Long Zhang said: ‘We wanted to do this in pothos because it’s a robust houseplant that grows well under all sort of conditions.’

The plant doesn’t flower in temperate climates so the genetically modified plants wouldn’t be able to spread via pollen.

The work took more than two years. Dr Zhang said: ‘That is a long time, compared to other lab plants, which might only take a few months.’ 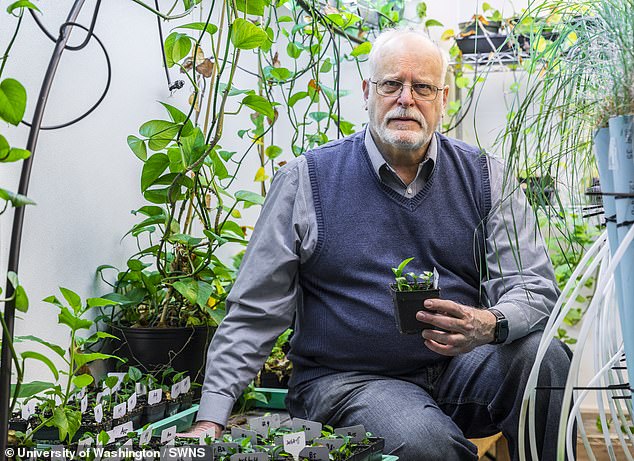 Plants in the home would need to be inside an enclosure with something to move air past their leaves, such as a fan, according to the study senior author, Professor Stuart Strand 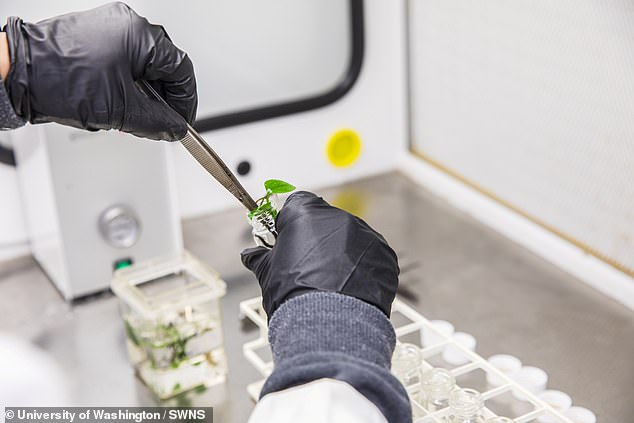 The researchers modified the plants to express a protein called cytochrome P450 2E1, or 2E1 for short, allowing it to use the compounds in the air as food for growth

HOW CAN YOU IMPROVE AIR QUALITY IN THE HOME?

The researchers then tested the modified plants ability to remove pollutants from air compared to normal pothos ivy.

They put both types of plants in glass tubes and then added either benzene or chloroform gas into each tube.

Over 11 days, the team tracked how the concentration of each pollutant changed in each tube.

For the unmodified plants, the concentration of either gas didn’t change over time.

But for the modified plants, the concentration of chloroform dropped by 82 per cent after three days, and it was almost undetectable by day six.

The concentration of benzene also decreased in the modified plant vials, but more slowly.

By day eight, the benzene concentration had dropped by about 75 per cent, the findings, published in the journal Environmental Science and Technology, said.

In order to detect these changes in pollutant levels, the researchers used much higher pollutant concentrations than are typically found in homes.

But the team expects that the home levels would drop similarly, if not faster, over the same time frame.

Plants in the home would also need to be inside an enclosure with something to move air past their leaves, such as a fan, according to Professor Strand.

He said: ‘If you had a plant growing in the corner of a room, it will have some effect in that room.

‘But without air flow, it will take a long time for a molecule on the other end of the house to reach the plant.’

The team is now working to improve the plants’ capacity by adding a protein that can break down another hazardous molecule found in home air – formaldehyde.

Formaldehyde, which is present in some wood products as well as tobacco smoke, was first classified as a probable human carcinogen in 1987 by the US Environmental Protection Agency (EPA).

Professor Strand said: ‘These are all stable compounds, so it’s really hard to get rid of them.

‘Without proteins to break down these molecules, we’d have to use high-energy processes to do it.

‘It’s so much simpler and more sustainable to put these proteins all together in a houseplant.’

Chloroform is a coluorless liquid with a pleasant odour and a slightly sweet taste, which was used as an inhaled anaesthetic during surgery in the past.

Benzene is a natural part of crude oil and gasoline, cigarette smoke and forest fires. It is widely used in products such as plastic and synthetic fibres.

It is a known carcinogenic, and can also affect the blood, immune and nervous system.