An American war hero who was recently awarded the nation’s highest military honour credits an embedded Australian journalist for his bravery.

Former Staff Sargeant David Bellavia single-handedly took on a house full of ‘suicidal jihadists’ in the Battle of Fallujah in Iraq in 2004.

He became the first surviving Medal of Honour recipient on Tuesday when US President Donald Trump recognised his bravery in a White House ceremony.

Sgt Bellavia, now 43, was leading a squad in support of Operation Phantom Fury in November 2004.

After helping his platoon escape fire, he entered a house and killed at least four insurgents who were firing rocket-propelled grenades, the White House said.

Sgt Bellavia acknowledged the persistence of former News Corp Australia reporter Michael Ware, who encouraged him to re-enter a jihadist hideout to save his platoon. 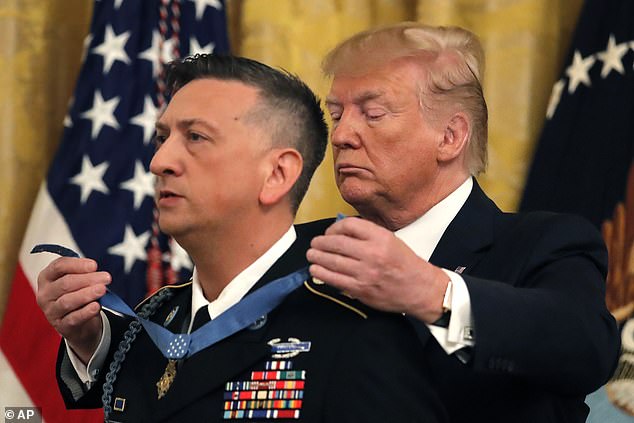 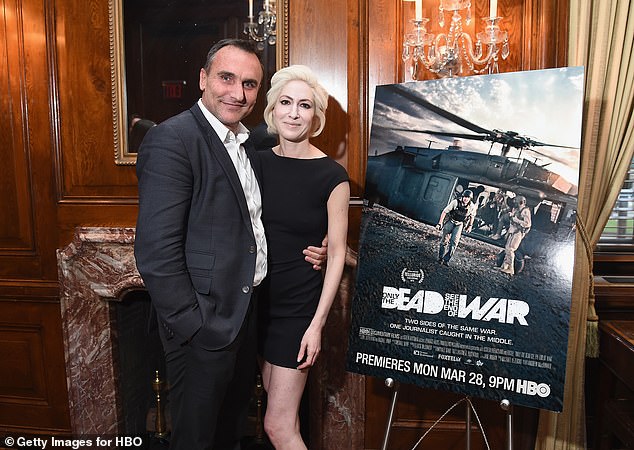 Ware (left) followed Sgt Bellavia into the home with his camera and became the only eyewitness, eventually using the footage to create his award winning Netflix film Only The Dead

‘I looked at Michael Ware and I needed someone to just give me some confidence, some ability that I could do (it),’ Sgt Bellavia said.

‘At that point in my life a guy from Australia, who I literally didn’t want anything to do with, an embedded reporter, that embedded reporter gave me a lot of confidence that this was a very rational idea.’

Ware followed Sgt Bellavia into the home with his camera and became the only eyewitness of his bravery, eventually using the footage to create his award winning Netflix film Only The Dead. 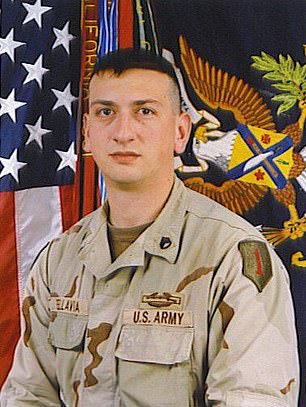 Bellavia is seen above during his military service

Sgt Bellavia said he initially considered Ware a nuisance, and said he had no interest in working with journalists on the battlefield.

He said he didn’t want to feel like he had to ‘babysit’ a journalist, but by the end of the trip, the pair had a mutual respect for one another and their roles in the war.

‘I learnt a great deal of respect of the role that journalists have on the battlefield. Without them, men and women who do this job, Americans will not know what we do, it would go unremarked.

‘Bleeding and badly wounded, David single-handedly defeated the forces who had attacked his unit and would have killed them all had it not been for the bravery of David,’ Trump said. 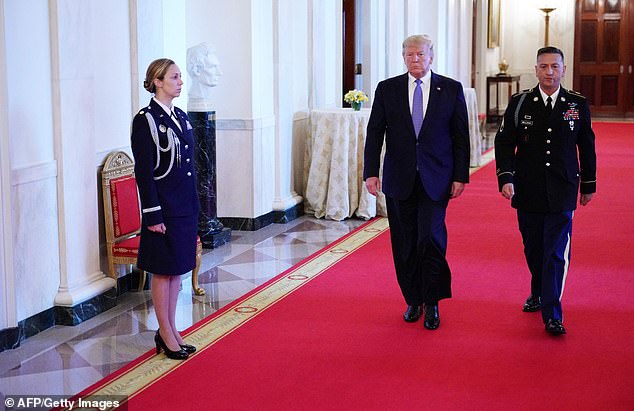 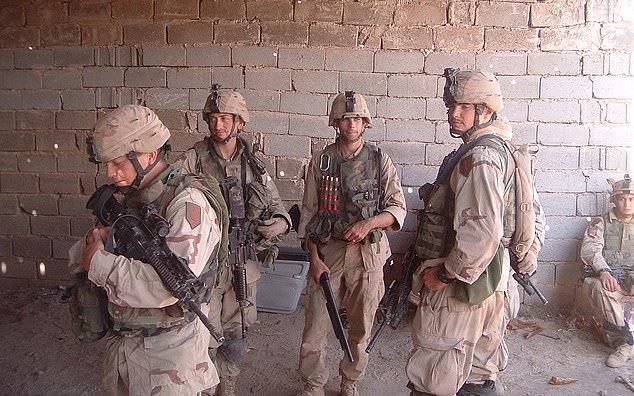 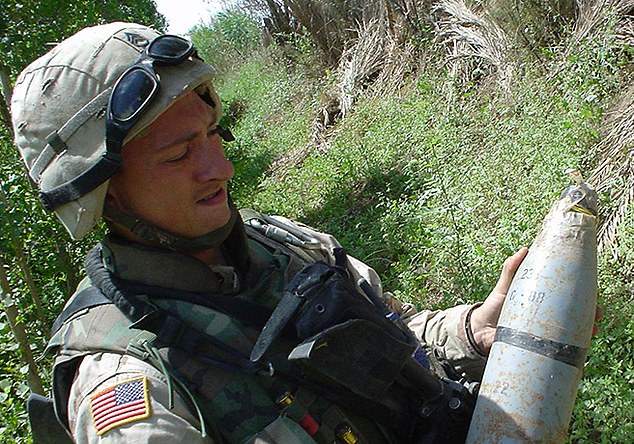 Bellavia, who left the Army in 2005, has been awarded the Silver Star, the Bronze Star and the New York State Conspicuous Service Cross

HOW STAFF SGT. DAVID BELLAVIA SINGLE-HANDEDLY SAVED THE LIVES OF HIS SQUAD IN FALLUJAH 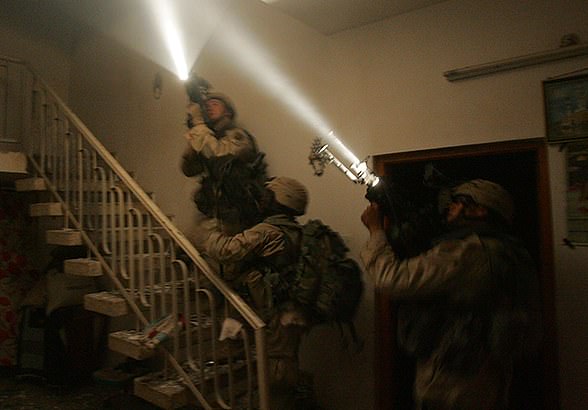 Soldiers of 1st Platoon, Alpha Company, enter and clear a building during heavy fighting in the Askari District of northeastern Fallujah on November 9, 2004

On November 10, 2004, Staff Sgt. David G. Bellavia was tasked with leading his squad in an effort to clear a block of 12 buildings in support of Operation Phantom Fury in Fallujah, Iraq.

It was believed that at least six armed insurgents had taken shelter on this block.

After finding nothing in the first nine buildings, Bellavia’s platoon moved into the tenth compound, where they immediately came under fire from the front hallway.

Two insurgents armed with machine guns sprung an ambush on the squad as they waited under a stairwell. 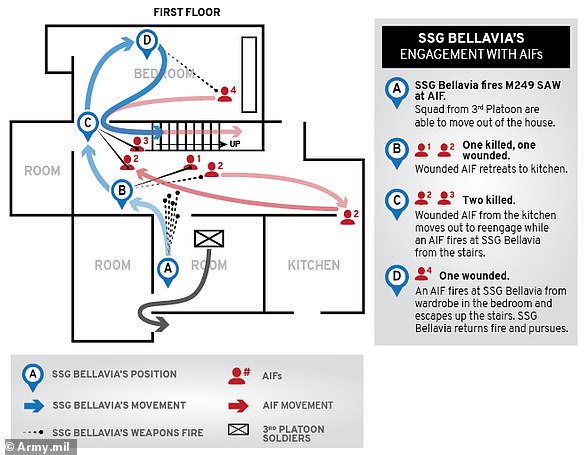 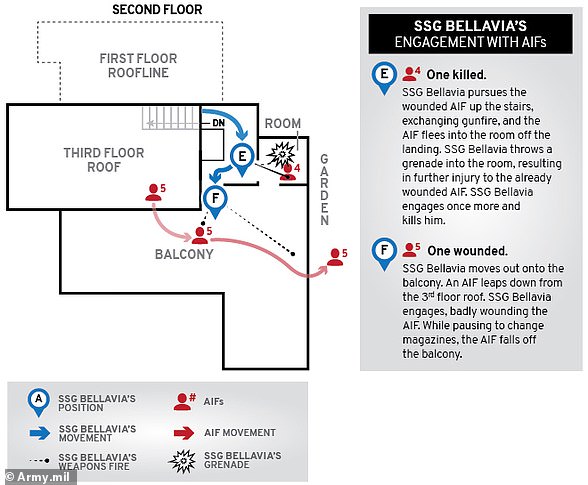 He killed four insurgents and seriously wounded one other during that fateful night, according to the military

Other insurgents opened fire from an adjacent window. With gunfire coming from two directions, the soldiers were trapped.

Enemy gunfire resulted in three soldiers being wounded. They needed to be quickly evacuated so they could get treatment.

That’s when Bellavia grabbed an M249 squad automatic weapon and barged an adjacent room, holding the trigger down and forcing the enemy to retreat into a kitchen.

This allowed his soldiers to move into the street.

Bellavia then moved deeper into the house and killed an insurgent armed with a rocket-propelled grenade launcher just before he was about to shoot at his platoon.

Another insurgent shot Bellavia and wounded him before fleeing into the kitchen.

Bellavia and another soldier exchanged gunfire with the insurgent in the kitchen.

As the soldier ran low on ammunition, Bellavia ordered him to leave and come back with an M16 rifle and a shotgun.

Bellavia then killed the insurgent in the kitchen and two others while seriously wounding another, single-handedly saving the lives of an entire squad.