A war veteran who survived the Spanish flu epidemic has celebrated his 107th birthday with a party at his care home.

Reg Lewis saw action in Singapore and India during the Second World War and only stopped working at the age of 93.

He reached his latest milestone on Tuesday and due to the current social distancing rules, his relatives were unable to be with him for his birthday.

War veteran Reg Lewis, who survived the Spanish flu crisis, has celebrated his 107th birthday with a party at his care home in Dartington

But residents and staff at the Forder Lane House Care Home in Dartington, Devon, stepped in to throw Reg a party.

Christine Candlish, chief executive of South Devon Rural Housing which owns the home, said: ‘Everyone is fond of Reg and staff are delighted to see him tick off another year in his amazing catalogue of personal milestones.

‘The current health emergency obviously puts a strain on the staff and residents of care homes – and especially their loved-ones, who are unable to visit.

‘Our priority is to protect our residents and keep them safe during this difficult time but the people around Reg will make sure that he has a good time as he celebrates his birthday among friends.’

Reg, who was born in Shropshire a year before the start of World War One, has lived through the 1918 Spanish Flu epidemic, was 21 when Hitler came to power in Germany, and has lived under 21 Prime Ministers and four monarchs.

He went on to run his own butcher’s business in the county until he was called up to serve in WW2 with the Royal Devon Yeomanry artillery brigade out in Singapore and India.

He survived the war and on his return to England received a telephone call from the officer he served under in Singapore, offering him the chance to manage the local farm in Holne, a village on the edge of Dartmoor. 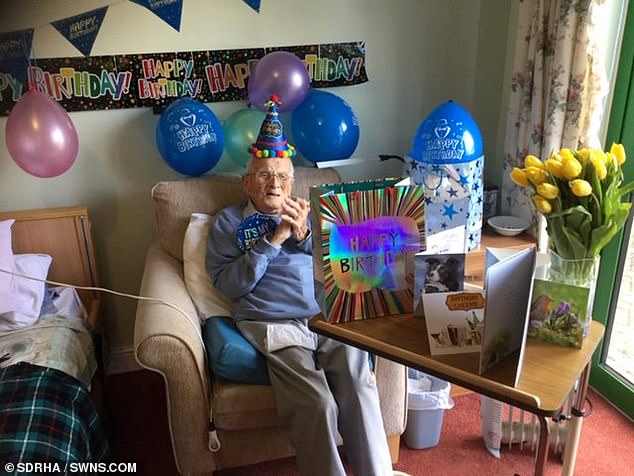 Reg  has lived through the 1918 Spanish Flu epidemic, was 21 when Hitler came to power in German and has lived under 21 Prime Ministers

Reg managed the farm for 20 years until it was sold, at which point he returned to working as a butcher in the Torbay area – not retiring until the age of 93.

He became a resident at Forder Lane House in 2018 and staff say he enjoys taking part in daily activities including Tai Chi and also plays cards with family and other residents in his spare time.

Mike said: ‘We are absolutely enamoured by the home and the care that Reg receives there. Dad is very happy at Forder Lane House and tells us that he’s very well looked after’.