A French Olympic ice dancer suffered an embarrassing wardrobe malfunction when her top came undone during a routine on Monday.

Gabriella Papadakis, 22, accidentally flashed her nipple when the halterneck to her glittering green costume unfastened while performing with her partner, Guillaume Cizeron, 23.

The pair continued despite the setback and ended up finishing in second place in the short program.

The show of professionalism won praise from dozens of fans and fellow skaters, who took to Twitter to congratulate her on finishing the routine.

French ice dancer Gabriella Papadakis, 22, accidentally flashed her nipple when the top to her costume came unfastened while performing with her partner, Guillaume Cizeron, 23 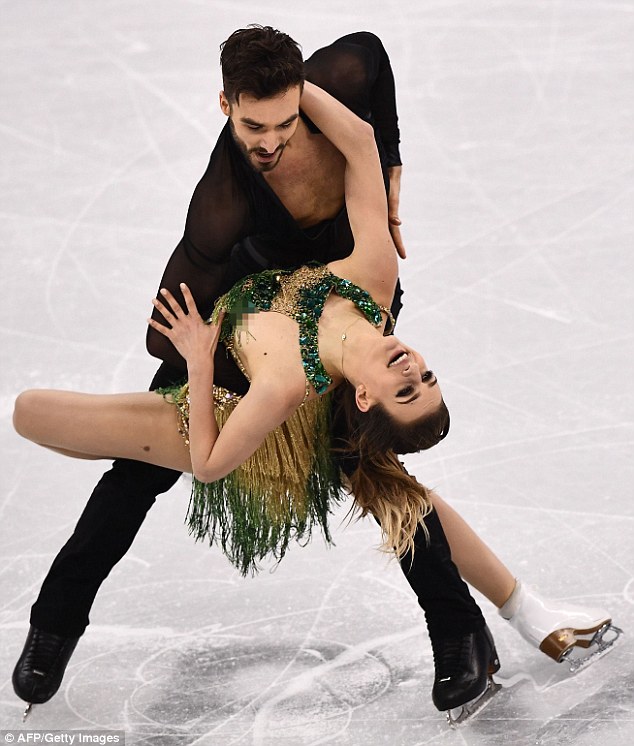 The pair, who are tipped for medal success, continued despite the setback and ended up finishing in second place in the short program on Monday 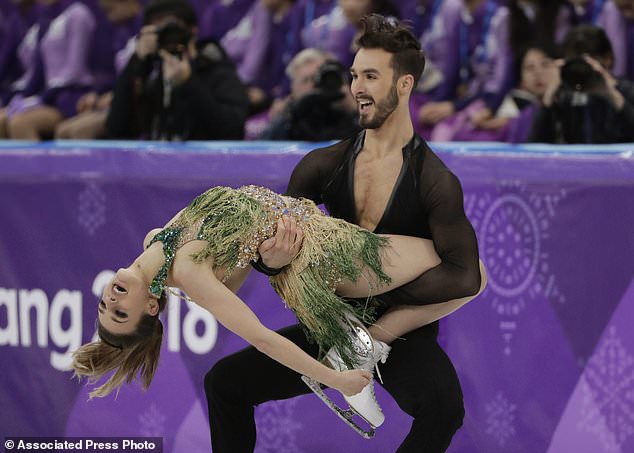 Papadakis was left in tears following the performance and avoided reporters’ questions. She said the wardrobe malfunction was a ‘nightmare’ 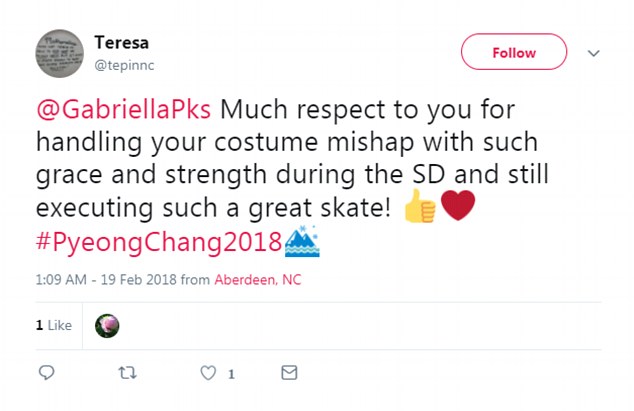 The show of professionalism won praise from dozens of fans and fellow skaters, who took to Twitter to congratulate her on finishing the routine

One described her as a ‘class act’ while another posted: ‘I feel so bad for Gabriella Papadakis with that wardrobe malfunction during their ice dance short program. But I applaud her for pushing through and never giving up till the end!’

The pair produced a score of 81.93 points at the Gangneung Ice Arena, leaving them second behind Canadian stars Tessa Virtue and Scott Moir.

It has not been confirmed whether they had points docked for the mishap but the rules state losing any part of a costume, even a hair clip, can lead to a one-point deduction.

Papadakis was nearly in tears as she approached reporters after the routine, which is required of any Olympic competitor after competition. 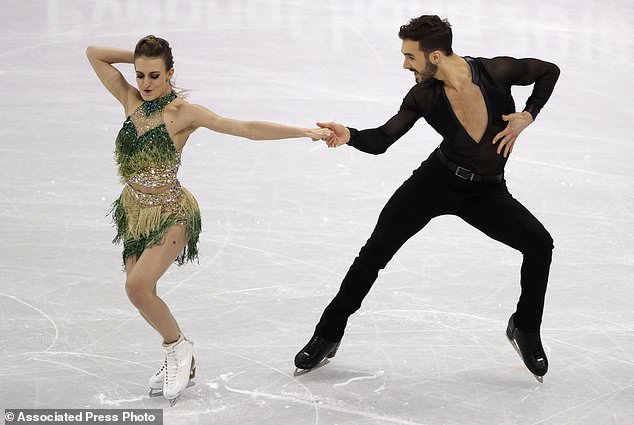 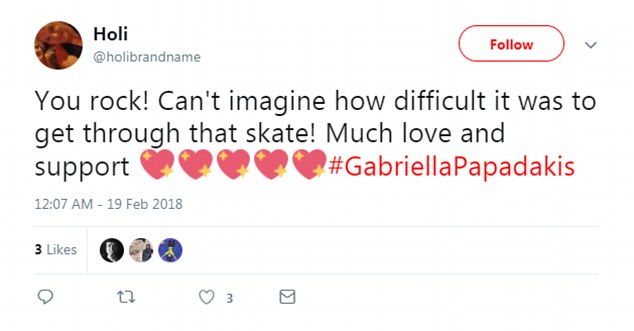 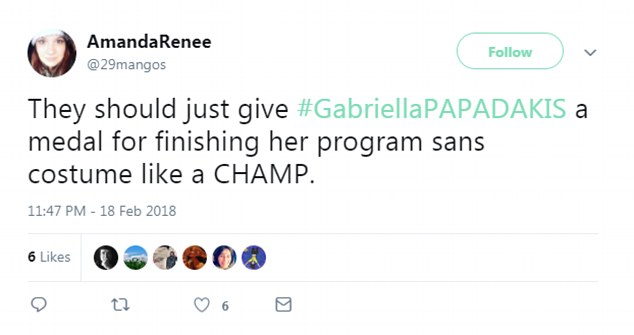 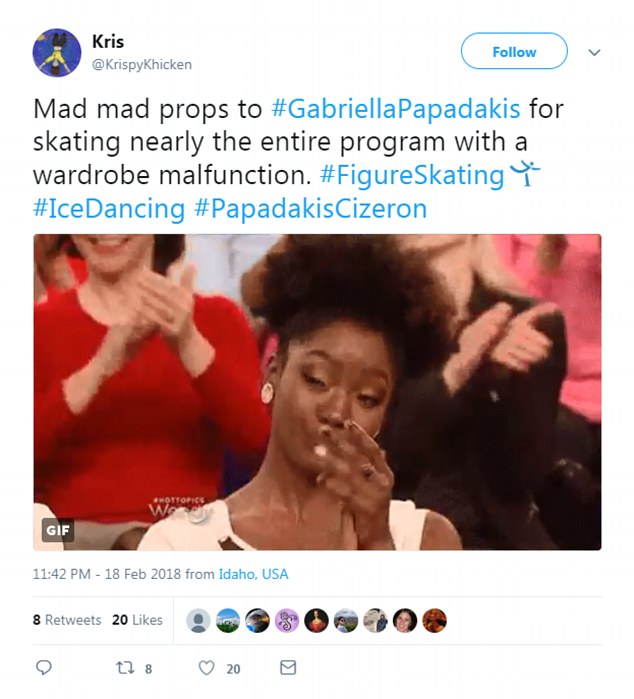 Fans and fellow athletes praised Gabriella and her partner on social media, pictured

But she was in better spirits an hour later, when she no doubt realized that her chance of a gold medal was still intact.

She said:  It was pretty distracting, kind of my worst nightmare happening at the Olympics. I told myself, “I don’t have a choice. I have to keep going,” and that’s what we did. I think we can be proud of ourselves being able to deliver a great performance with that happening.’

Meanwhile her partner Cizeron said it was ‘frustrating’ to have points taken off for something out of their control. 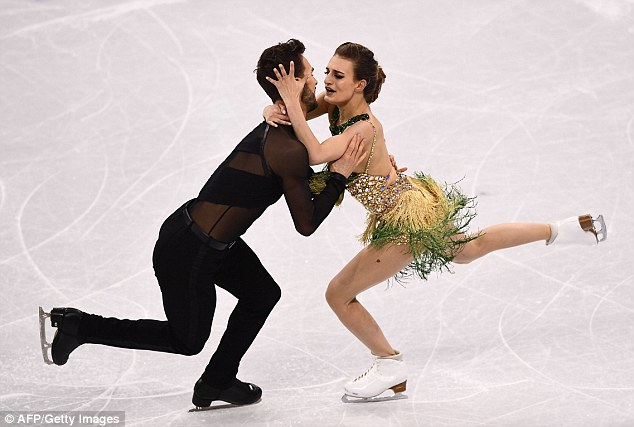 Papadakis and Cizeron, who are hoping for a podium place, were dancing to Ed Sheeran’s ‘Shape of You’ when the wardrobe mishap occurred

‘It’s just a costume issue, something as stupid as that, so it’s a little bit disappointing,’ he said.

It was the second wardrobe mishap during the skating program at the Pyeongchang Games.

American-born ice dancer Yura Min, competing for South Korea, had the back of her costume come unclasped during her short program with partner Alex Gamelin in the team competition.