An incurable condition which can paralyse children is on the rise in England and has prompted an investigation by health officials.

A total of 28 cases of the polio-like acute flaccid paralysis (AFP) have been reported in the country this year, according to official figures.

Normally only a handful of people develop the illness, which resembles polio by causing symptoms such as a fever and floppy limbs.

The spike comes amid a record high number of cases of an almost identical condition in the US this year, with at least 158 children affected.

Most of the AFP cases in England have been diagnosed since September, Public Health England said, but it could not reveal where they happened.

The condition is believed to be triggered by various viruses which usually just cause cold-like symptoms and it can be difficult to diagnose because its effects vary between patients.

Children in the US have been struck by acute flaccid myelitis, which has the same effects. Both the conditions are far less common in adults.

No children in the US have died of the condition but around half of the diagnosed patients have had to be taken into intensive care and put on ventilators.

There is no information about patients’ outcomes in England, but health officials are warning parents to act quickly if their child’s limbs begin to go floppy. PHE has yet to confirm the age ranges of those who have been struck down.

Dr Mary Ramsay, the head of immunisations at PHE, said: ‘AFP is very rare, however, if you or your child develops weakness in any limb you should seek medical care immediately so that appropriate testing and care can be given.

WHAT IS ACUTE FLACCID MYELITIS?

Acute flaccid myelitis (AFM), of which acute flaccid paralysis is believed to be an effect, is a rare and poorly-understood but serious condition.

The condition is thought to be caused by viruses such as enteroviruses which infect the brain or spinal cord and cause nerve damage.

Viruses believed to trigger the condition usually only cause mild flu-like symptoms but can trigger the more serious AFM.

Patients may also have cold-like symptoms or a fever.

Because its causes are unclear there is no standard treatment for AFM and therapy is usually given on a case-by-case basis.

There are usually only a ‘handful’ of cases in England each year, while the US tends to go through a two-yearly cycle in which there will be a year with only two dozen or so cases then the next year will be over 100.

The virus Enterovirus D68 is believed to be linked to the infection and has been found in patients in both the US and UK.

‘We are investigating potential causes and working hard to build better awareness amongst health care professionals about how to test and manage patients with AFP.

‘We are ensuring up-to-date information is available for patients and their families who may be affected.’

Doctors generally have to examine a patient’s nerves, spine and brain, and the fluid around them, in order to diagnose the condition.

But because it doesn’t have a single cause and can be triggered by usually less harmful viruses, AFP can be difficult to spot fast.

The condition is thought to be caused by viruses called polioviruses and non-polio enteroviruses – hence the comparisons to polio, which has been eradicated.

Describing the symptoms, a PHE spokesman added: ‘AFP affects the nervous system, causing one or more of the limbs to become weak or floppy – and may look similar to polio.

‘It tends to particularly, though not exclusively, affect children.’

PHE is looking into the causes of the rise in the illness, including the role of the Enterovirus D68, which has been detected in eight cases this year.

And the officials have urged doctors to report any suspected cases and to send any samples for testing in specialist laboratories.

Acute flaccid myelitis (AFM) was first discovered in California in 2012, when there were three cases, and it has become gradually more common.

US Government officials said earlier this month they believed cases of the rare but serious condition had peaked.

Researchers also believe there is a link between the condition and Enterovirus D68 but recent outbreaks have tested positive for the virus less often.

The average age of those affected in the US outbreak is four years old and more than 90 per cent of cases are in children under 18.

This year’s incidence rate may rise even higher if investigators count cases which occurred during the summer. 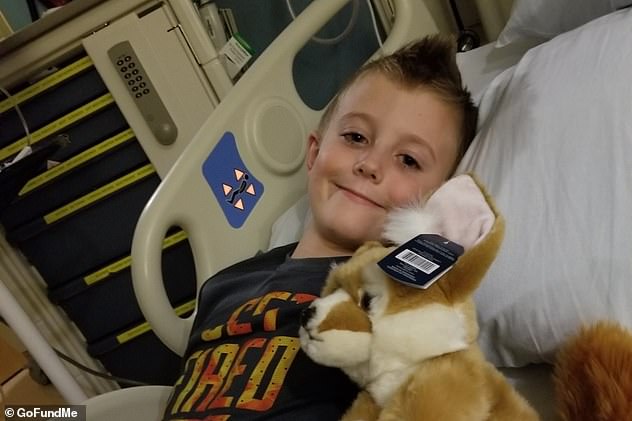 AFM affects the nervous system by attacking part of the spinal cord, which causes the body’s muscles and reflexes to weaken. Pictured is seven-year-old Quinton Hill, who was among the first children in Minnesota to be diagnosed after losing movement in his arm in September

As of December 9, 311 reports were being investigated in the US.

Confirming cases requires an MRI scan showing lesions in the part of the spinal cord which controls muscles.

This year’s outbreak is spread across 36 states, peaking in Texas with 21 incidences followed by Colorado with 15 and Ohio with 10.

This may just be due to better diagnosis, with Colorado being at the centre of the 2014 outbreak and its doctors therefore being more aware of AFM’s symptoms. 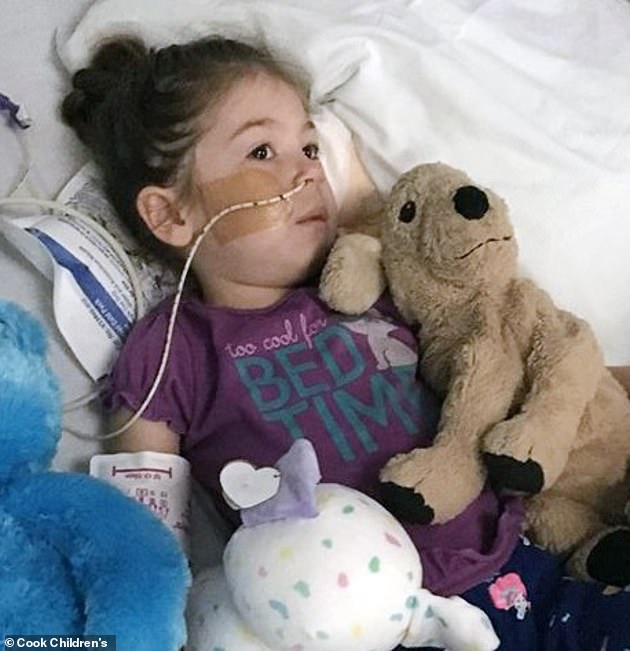 Although no children who developed AFM this year have died, around half were admitted to intensive care and hooked up to ventilators to help them breathe. Pictured is five-year-old Elizabeth Storrie, of Willow Park, Texas, who was one of 2018’s confirmed cases

No specific treatment is available for AFM and care is generally recommended on a case-by-case basis.

The CDC advises people get vaccinated against poliovirus and West Nile Virus due to both being potential causes.

‘It’s a one-in-million chance so it’s extremely unlikely your child will get this,’ said Dr Fernando Acosta, a paediatric neurologist in Fort Worth, Texas.

‘Even if they have sudden onset of weakness, AFM is unlikely to have caused it. It’s more likely to be a stroke.

‘However, if your child develops it, bring them in and this gives them best chance of survival.’

POLIO-LIKE DISEASE REACHES RECORD HIGH IN THE US IN 2018

The polio-like disease that causes paralysis in children has reached a record high, health officials in the US have confirmed.

Acute flaccid myelitis, which leaves youngsters unable to move their face, neck, back or limbs, has been confirmed in 158 children so far this year.

This is nine more than in 2016 and a staggering 155 more than when the disease emerged in the country just six years ago.

Although no children who developed AFM this year have died, around half have been admitted to intensive care and hooked up to ventilators to help them breathe.

AFM affected at least 120 children in the US in 2014, followed by 149 confirmed cases two years later. For unclear reasons, incidences were much lower in 2015 and 2017, however, one child died from the disease last year.

As of December 9, 311 reports were being investigated. Confirming cases requires an MRI scan showing lesions in the part of the spinal cord that controls muscles.

This year’s outbreak is spread across 36 states, peaking in Texas with 21 incidences followed by Colorado with 15 and Ohio with ten.

This may just be due to better diagnosis, with Colorado being at the centre of the 2014 outbreak and its doctors therefore being more aware of AFM’s symptoms.