The announcement that Warren Buffett, Jeff Bezos and Jamie Dimon are combining their bountiful resources to build a new healthcare system for their companies’ employees demonstrates in the strongest terms yet a united front by the three billionaires against President Trump.

All three have been critical of the president in the past in varied degrees of sharpness.

Their announcement plants them in the void left by Trump and his administration’s lack of action on healthcare after months of discussion and promises to repeal and replace Obamacare.

It also falls in line with their track record of support for The Affordable Care Act.

Buffett, whose net worth is estimated at $93billion, has emphatically stayed away from vocal criticisms of the president.

‘I’m not in the business of attacking any president, nor do I think I should be’, is what he told one CNBC interviewer last August.

His Democratic allegiance is however clear – he endorsed Hillary Clinton during her election campaign and was a champion of Obama’s Affordable Care Act, describing it as a ‘step in the right direction’ despite its flaws. 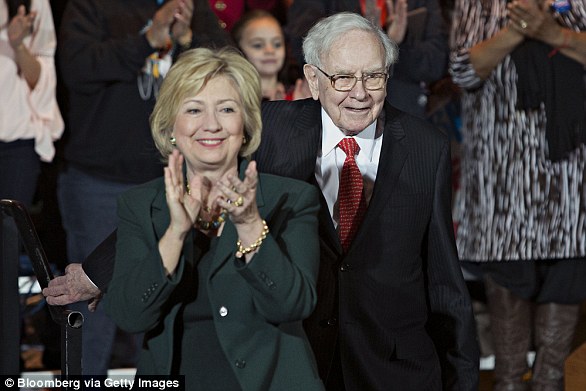 Warren Buffett endorsed Hillary Clinton during the election (the pair are shown above in December 2015). He was an early advocate of the Affordable Care Act and much of his charity work includes large donations to health-focused organizations

Buffet is a passionate health philanthropist and has used his fortune to upscale The Bill & Melinda Gates Foundation which places affordable healthcare at the forefront of its work.

Trump has said little of him since he took office.

In 2015, he suggested Buffett was the kind of talent he would like in his government and described him as a ‘common sense guy’.

Dimon was a long time Obama supporter and has made generous contributions to the Democratic party.

He was a member of Trump’s now disbanded Strategy and Policy Forum but abandoned the council along with other business leaders over Trump’s controversial remarks about the alt-right Charlottesville riots which left a woman dead.

Despite receiving criticism from fellow Democrats over his decision to join the counsel, he put his support behind the president at the time.

‘I’m a patriot and will do what I can to help the United States of America; that includes helping whoever is president,’ he said at the time. 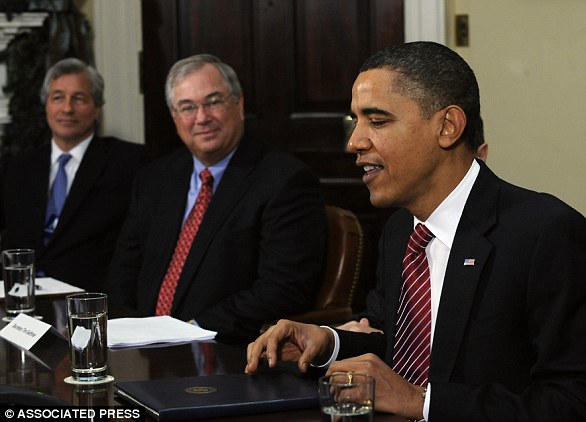 Jamie Dimon (far left during a 2009 meeting with Barack Obama and PNC Chairman and CEO Jim Rohr) was described as Obama’s favorite banker. He is a long-term Democrat and has made contributions to the party 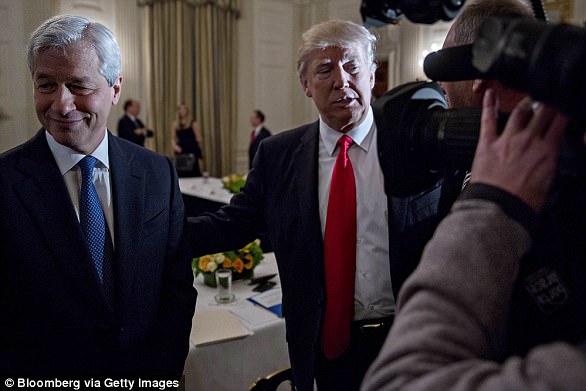 Dimon was supportive of President Trump in the early stages of the presidency and was a member of his Strategy and Policy Forum but quit alongside other business leaders over Trump’s controversial remarks about white supremacists at a Charlottesville rally in August. They are pictured in February 2017

Dimon reversed that position in a memo to staff after Trump sympathised with the white supremacists in charge of the Charlottesville rally.

‘There is no room for equivocation here: the evil on display by these perpetrators of hate should be condemned and has no place in a country that draws strength from our diversity and humanity,’ he said.

Bezos is the president’s most visible foe out of the trio. 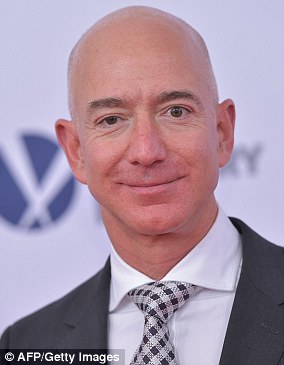 Bezos is a regular target in President Trump’s disgruntled tweets. He has retaliated by saying little of their feud but by donating to DACA recipients and by decrying Trump’s immigration policies

He was routinely ridiculed by Trump during the presidential campaign and deemed a herlader of ‘Fake News’ because of his newspaper, The Washington Post, and Trump’s hatred of it.

He believed he was unfairly attacked by its reporters and, in a separate gripe, has repeatedly alleged that Amazon does not pay internet taxes.

Bezos has refrained from the same Twitter insults he was often the subject of, however he once claimed that Trump would threatened to ‘erode democracy’ before he won.

In one rare, spatty come-back in 2015, Bezos started the hashtag ‘sendDonaldtospace’ and joked that he would ‘save’ the president a seat on his Blue Origin rocket.

His remarks against the president since he took office have been limited to immigration.

Earlier this month, he donated $33million to provide college tuition fees for 1,000 undocumented young Americans or ‘Dreamers’ whose right to stay in the country have been undercut by the president’s harsh crackdown on immigration.

His recent takeover of Whole Foods added hundreds of thousands of employees – the recipients of the new healthcare plan – to Amazon’s roll call.

In Bezos they won a new boss who, unlike former CEO John Mackley, supports Obamacare.

Mackley compared the ACA to socialism in an op-ed for The Wall Street Journal. Later, he said it was more akin to fascism.