‘The wealthy are definitely undertaxed’: Billionaire Warren Buffett says he would be ‘fine with more taxes for guys like me’

By Reuters and Dailymail.com Reporter

Billionaire investor Warren Buffett said on Monday that the wealthy, including himself, are not paying enough taxes.

‘The wealthy are definitely undertaxed relative to the general population,’ Buffett, the chairman of Berkshire Hathaway Inc, told CNBC television on Monday.

‘As we get more specialized, the rich will get richer,’ he continued.

‘The question is: How do you take care of a guy who is a wonderful citizen whose father died in Normandy and just doesn’t have market skills?

‘I think the income tax credit is the best way to address that.

‘That probably means more taxes for guys like me, and I’m fine with it,’ he said.

Warren Buffett, the chairman and CEO of Berkshire Hathaway, thinks wealthy people such as himself do not pay enough taxes

Buffett, 88, spoke after Charlie Munger, his 95-year-old business partner and Berkshire vice chairman, told CNBC earlier this month that states like California and Connecticut have been ‘stupid’ for driving rich people away.

After regaining control of the House of Representatives in the 2018 midterm elections, some Democratic lawmakers have been calling for higher taxes on the wealthy.

They include Alexandria Ocasio-Cortez, a Democrat from New York City, who has proposed a 70 percent marginal tax on incomes over $10 million to bridge the growing wealth gap between the rich and poor.

Ocasio-Cortez’s plan is just one of many emerging proposals to force the wealthy to pay more.

Sen. Elizabeth Warren has proposed a ‘wealth tax’ that slaps a 2 per cent tax on households worth $50 or more, and 3 percent for those with a fortune worth $1 billion or more.

But Buffett’s good friend, Microsoft founder Bill Gates, warned earlier this month that plans like those floated by Ocasio-Cortez wouldn’t actually target the vast wealth of many of the nation’s richest people.

Gates noted that many very wealthy people’s earnings subject to income taxes  make up a tiny fraction of their overall wealth – a ’rounding error of ordinary income’ as he put it. 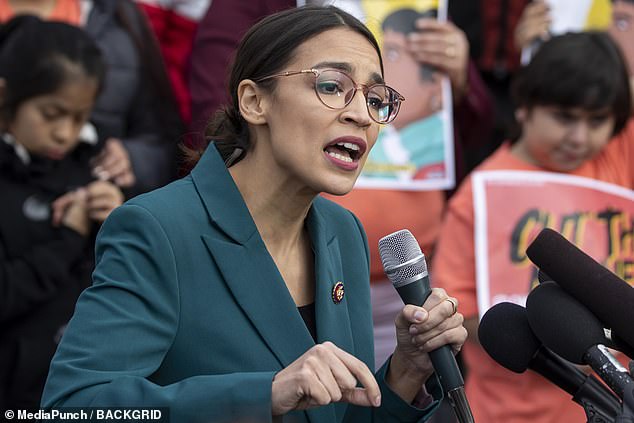 After regaining control of the House of Representatives in the 2018 midterm elections, some Democratic lawmakers like Alexandria Ocasio-Cortez (above) have been calling for higher taxes on the wealthy

‘I believe US tax rates can be more progressive,’ he said.

‘Now, you finally have some politicians who are so extreme that I’d say, “No, that’s even beyond.”

‘You start to create tax dodging and disincentives, and an incentive to have the income show up in other countries and things.’

‘Certainly, the idea of government being more effective in terms of how it runs education or social programs, there’s a lot of opportunity for improvement there,’ Gates said in a podcast on The Verge website.

‘In terms of revenue collection, you wouldn’t want to just focus on the ordinary income rate, because people who are wealthy have a rounding error of ordinary income.’

He noted that hedge funders and other wealthy people are able to structure their finances in such a way that ordinary income is only a part of the picture.