Buffett reiterated his view that stocks are the best long-term investment during an interview on CNBC Thursday.

‘If you had your choice between buying and holding a 30-year bond for 30 years or holding a basket of American stocks, there’s just no question you’re going to do better owning stocks,’ he said.

Buffett took some of his own advice and bought a few more Apple shares for his Berkshire Hathaway conglomerate. The Omaha, Nebraska-based company already held 252 million Apple shares at the end of June.

The S&P 500 and Nasdaq stock indexes set record highs this week, although they pulled back some Thursday.

Berkshire has also accumulated more than $100 billion while Buffett looks for another acquisition or major investment.

Buffett said the U.S. economy overall continues to improve gradually just as it has done ever since the fall of 2009, although a number of Berkshire’s businesses are seeing their costs increase a bit because of inflation.

‘Across the board, business is good,’ Buffett said. ‘It was good two years ago. It keeps getting better.’ 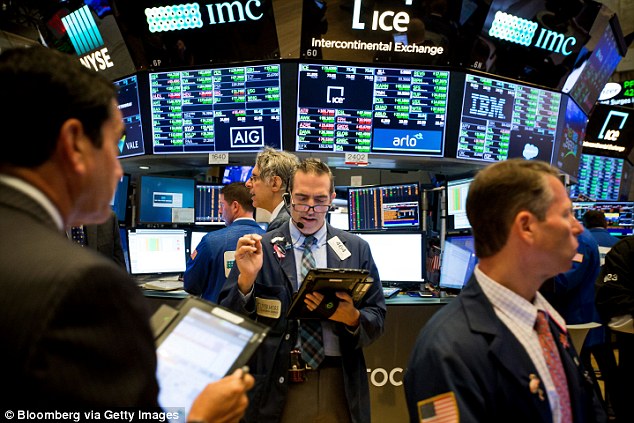 The S&P 500 and Nasdaq stock indexes set record highs this week, but began to pull back slightly on Thursday (stock image)

Buffett also noted Berkshire had also repurchased some of its own stock in the past month since it relaxed its own rules on buybacks.

Buffett was in New York Thursday on his 88th birthday to dine with the person who paid $3.3 million in a charity auction for a private lunch with the investor.

The lunch auction raises money for the Glide Foundation that helps the homeless in San Francisco.

Berkshire owns more than 90 companies, including BNSF railroad, clothing, furniture and jewelry firms. Its insurance and utility businesses typically account for more than half of the company’s net income. The company also has major investments in such companies as American Express, Coca-Cola Co. and Wells Fargo & Co.