An immigration activist group attempted to detail Elizabeth Warren’s triumphant return on Saturday to a gathering for movement progressives who helped make her a star.

Warren was part-way through an on-stage interview at Netroots Nation’s presidential forum, where she’d been sounding the alarm on big tech, when demonstrators took control of the event.

‘We need legalization on Day One of the 11 million undocumented immigrants,’ an activist shouted at Warren, as members of her advocacy group positioned a banner promoting their cause directly in front of cameras taping the event.

Warren was part-way through an on-stage interview at Netroots Nation’s presidential forum, where she’d been sounding the alarm on big tech, when demonstrators took control of the event

The demonstrator appeared to be associated with the organization Movimiento Coshecha, an immigrant-led group advocating for asylum for the nation’s entire undocumented population and family reunification

The demonstrator appeared to be associated with the organization Movimiento Coshecha, an immigrant-led group advocating for asylum for the nation’s entire undocumented population and family reunification.

Movimiento Coshecha had stormed Joe Biden’s campaign headquarters in Philadelphia, where the event Warren attended was also being held, earlier in the week, and said Saturated that it had chased the leading Democratic candidate around New Hampshire over the weekend.

She proceeded to shout loudly about the Obama administration’s handling of illegal immigration as Warren offered to provide her position on the issue, telling her, ‘Let’s talk about immigration.’

Not satisfied with Warren’s support for a total overhaul of the current process, she told Warren that the immigrants ‘need your commitment’ that they’ll receive legal status on the first day of her presidency, if she’s elected.

‘If you don’t commit, we’re leaving,’ the woman told her, as two security guards approached her. ‘You are not committing,’ she told Warren, before she did just that.

Warren told the crowd as the protesters excited the ballroom she was addressing that she wants to expand legal immigration and create a pathway to citizenship not just for Dreamers but families, too.

‘A path for citizenship that is fair and attainable,’ she said of her plan.

She said illegal immigrants who have been in American for years and and ‘integrated’ into their communities should be be allowed to remain in the country.

‘Part three is I will stop this ugly mess at our borders,’ she said. ‘No great nation tears families apart. No great nation locks up children. We need at the – we must at the borders respect the dignity of every human being who comes here.’

The Massachusetts senator became emotional as she discussed her visit to the McAllen, Texas, intake facility for immigrants who cross the border illegally.

Warren said she’d crack down on sexual and physical abuse at the detention centers. She said on her first day in office she’d appoint a commission to look into those crimes.

‘And Donald Trump may be willing to look the other way, but President Elizabeth Warren will not,’ she said to loud applause. 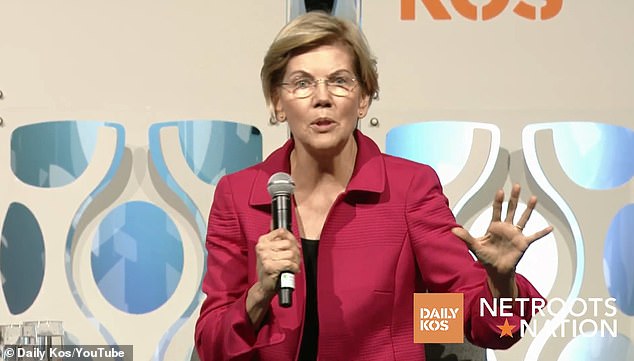 Warren told the crowd as the protesters excited the ballroom she was addressing that she wants to expand legal immigration and create a pathway to citizenship not just for Dreamers but families, too

Warren had taken the stage at the gathering she’s been attending for years to rapturous applause. An attendee in the packed hall, where the fire marshal had already issued a warning about stuffing the aisles, shouted to her, ‘We love you, Liz!’

She reminisced about the early days, when she set up the Consumer Financial Protection Bureau for Barack Obama with the backing of conference’s community and charged ahead with a recommendation to heavily regulate top tech brands.

‘Oh boo hoo,’ she said of a $5 million fine the Federal Trade Commission hit Facebook with Friday for privacy violations.

The company’s stock went up, not down, after the announcement.

‘We need to break up big tech,’ she proclaimed.

Warren said companies like Amazon are making a fortune off small businesses and user data.

She said they call the product by another name, ‘And then they move your profitable business that you sweated and bled for back to page seven, where it dies.’

Warren said that companies should have to choose whether they want to provide the platform for product sales or create products, ‘But you don’t get to do both.’

Additionally, she said the U.S. needs to enforce existing anti-trust laws so that large companies do not have as much power to steamroll small businesses.

‘Over time, creating these bigger and bigger giants, are both enormously damaging to the marketplace, to consumers and ultimately to democracy,’ she said. ‘When giant companies have so much power that they get to call the shots in Washington, it’s no longer just about the economy that they own, it’s our entire country. We’ve got to fight back on this.’

Warren said the criminal justice system needs to be reformed, front to back, so that minorities receive equal justice under the law.

She said she strongly supports marijuana legalization. ‘It’s not just for the few of you who think it’s funny,’ she said after some attendees whooped and hollered. ‘Not just for the mellow folks in the back. Or the folks with all the cookies over there.’

Rather, she said blacks and whites use marijuana at the same rate, yet blacks are three times more likely to go to jail for abusing the substance.

‘So easy answer for me. Make it legal, and then that problem goes away,’ she added.

Cash bail also needs to be eliminated and cannot be replaced with a system that discriminates against certain communities. For-profit prisons should also be banned, she said.

‘We’ve got to reform this whole system,’ she asserted.