Sen. Elizabeth Warren sent a fluffy substitute to Iowa to campaign for her with just five days to go before the Hawkeye state caucuses.

‘Bailey is a very persuasive dog. He arrived in Iowa late Friday, within 24 hours the Des Moines Register endorsed her,’ Mann told a group of several dozen on the campus of Wartburg College in Waverly, Iowa Wednesday afternoon. ‘He’s a natural closer.’

Sen. Elizabeth Warren sent her pup Bailey around to campaign stops in Iowa Wednesday as she remained in Washington for President Trump’s impeachment trial 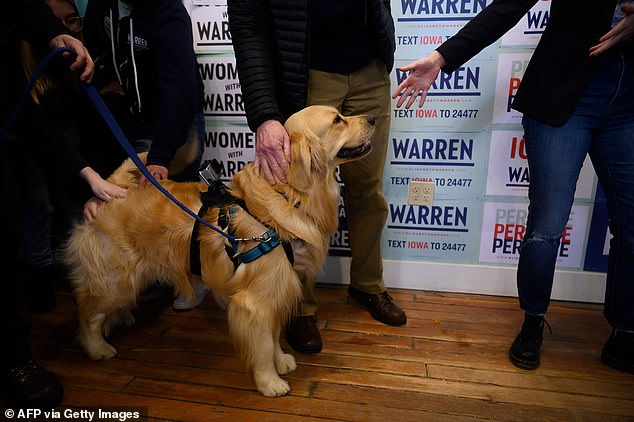 Bailey Warren, the golden retriever of Sen. Elizabeth Warren, participated in three campaign stops in Iowa Wednesday, with the senator stuck in Washington due to President Trump’s impeachment trial 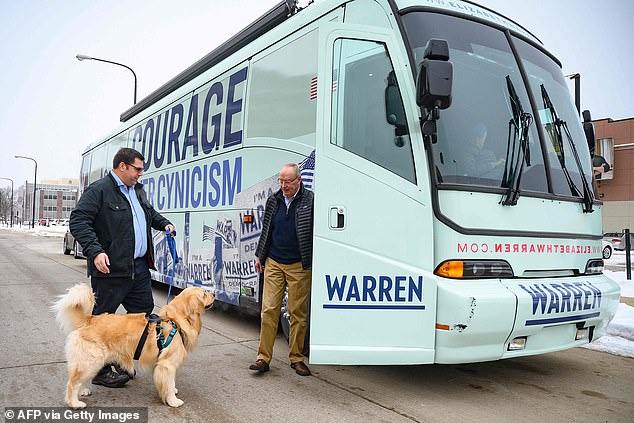 Alex Warren (left), the son of Sen. Elizabeth Warren, holds onto Bailey Warren (center), her golden retriever, as Bruce Mann, the senator’s husband, gets off the Warren campaign bus in Waterloo, Iowa, the first of three Wednesday stops 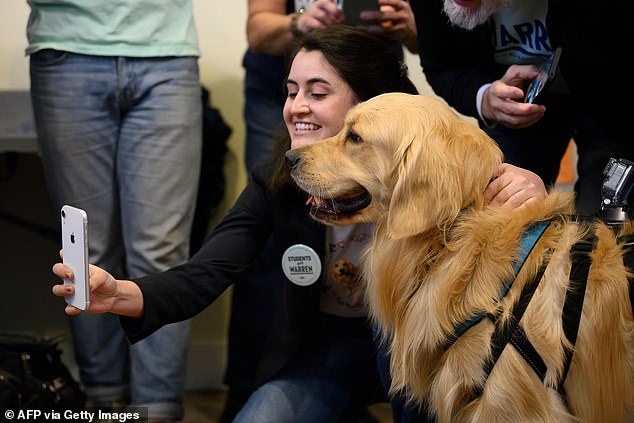 Bailey Warren participated in the same kind of selfie lines that Sen. Elizabeth Warren is known to have at the conclusion of her campaign events 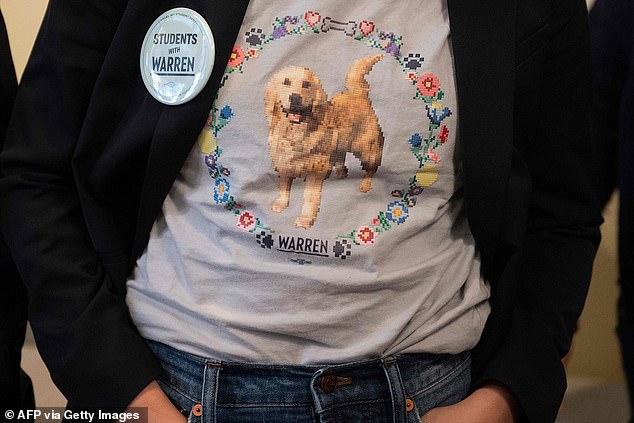 A volunteer at Warren’s campaign event in Waterloo sports a shirt showing the senator’s dog Bailey, who was campaigning in Iowa on behalf of the senator Wednesday 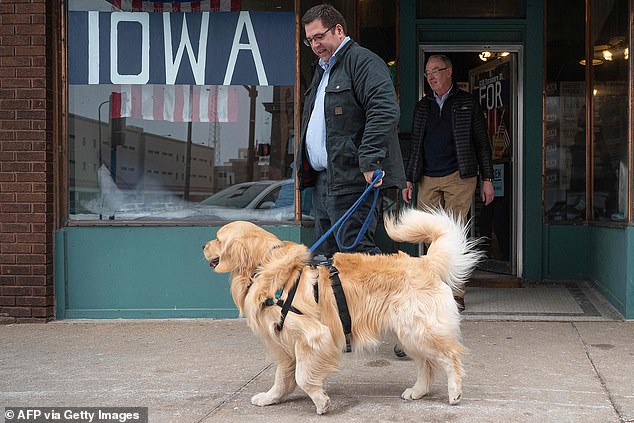 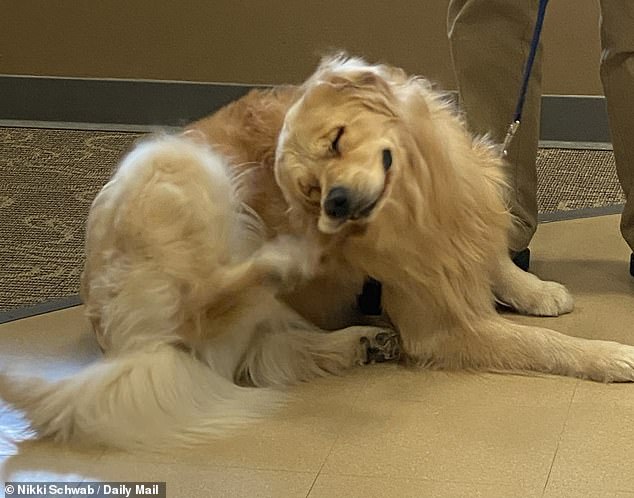 When Bailey took a minute to scratch an itch in Waverly, Iowa, he received ‘awwws’ from the small crowd 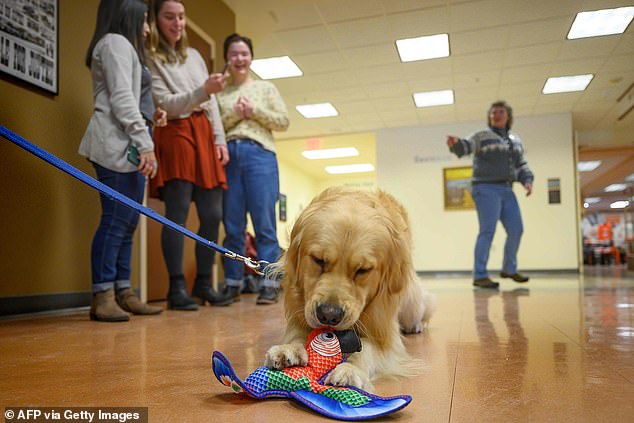 WHO LET THE DOG OUT? Bailey Warren plays with a chew toy at his second campaign stop of the day, on the campus of Wartburg College in Waverly, Iowa

Bailey, adorned with a ‘Consumer Watchdog’ collar, mugged for the cameras, and got ‘awww’-ed when he started scratching himself during the middle of Mann’s brief speech.

He also starred in his own Warren-style selfie line.

The Democratic senator from Massachusetts has made it a trademark at her campaign events to stay – sometimes for hours – and take a selfie with every guest.

‘He’s willing to be petted by every caucus-goer, as long as they caucus for Elizabeth,’ Mann told the small crowd. ‘On the other hand someone will have to enforce that because Goldens are pretty much indiscriminate in their affections.’

Warren and Mann’s son Alex held the dog while attendees took the pictures.

Mann described his wife as ‘the toughest person I have ever known.’

‘She’s tough without ever raising her voice. She’s tough in the sense of someone who never backs down,’ he said. ‘And so the Elizabeth who is in the selfie, the smiles, is the same Elizabeth who also terrifies bankers. And she really does.’

At the end of his shot pitch, Mann alluded to impeachment. 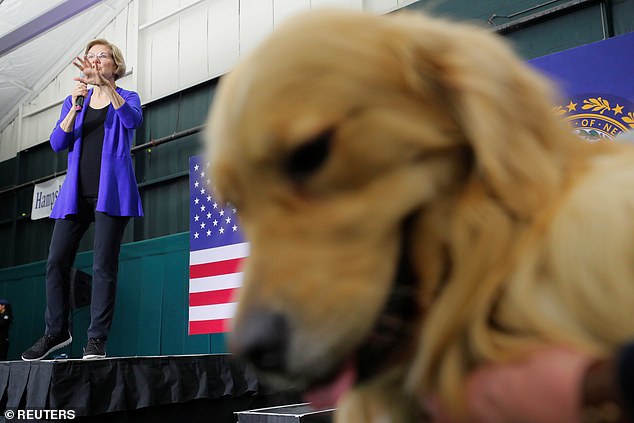 Bailey Warren (right) was on the campaign trail with Sen. Elizabeth Warren (left) previously. Here he is at a rally in Milford, New Hampshire 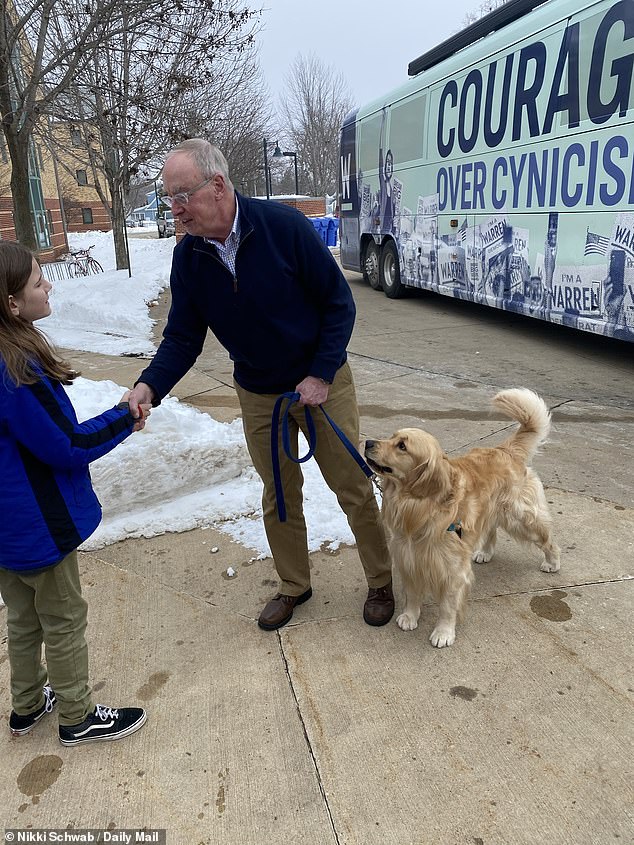 Bruce Mann (right), the husband of Sen. Elizabeth Warren, meets with Gideon Kidd (left), the brainchild behind the website IvePetThatDog.com

‘As you know she is stuck in Washington,’ Mann said, and received knowing laughs from the crowd. ‘She would much rather be here. But she takes here Constitutional duty very, very seriously.’

‘I may be a poor substitute,’ Mann added. ‘Bailey is not.’

He didn’t take questions from DailyMail.com on what he’d do as the nation’s first, first man.

He did take time to meet with Gideon Kidd, the child behind the popular website IvePetThatDog.com. Kidd lives locally in Cedar Rapids, Iowa.

Mann let Kidd have first dibs of taking a picture with the pooch before meeting the crowd inside.

‘If you’re on the fence about Elizabeth, Bailey will get that done,’ Mann boasted.