The Warriors have revealed five-eighth Chanel Harris-Tavita ruptured his testicle in the 39th minute of the team’s big loss to the Storm last Saturday, but fought through the pain to play on for the full 80 minutes.

Harris-Tavita made 18 tackles with no misses even after teammate Josh Curran’s knee struck him in the groin and caused the agonising injury.

Curran and Harris-Tavita came together as they made a desperate tackle on Ryan Papenhuyzen in the closing minutes of the first half.

The 23-year-old will be sidelined for a maximum of four weeks and is expected to return in round 10 against the Rabbitohs.

The Kiwi star had surgery on the area, as damage to the testicle must be repaired within 48 to 72 hours of the rupture to ensure a 90 percent chance of full recovery with no impact to the reproductive organ. 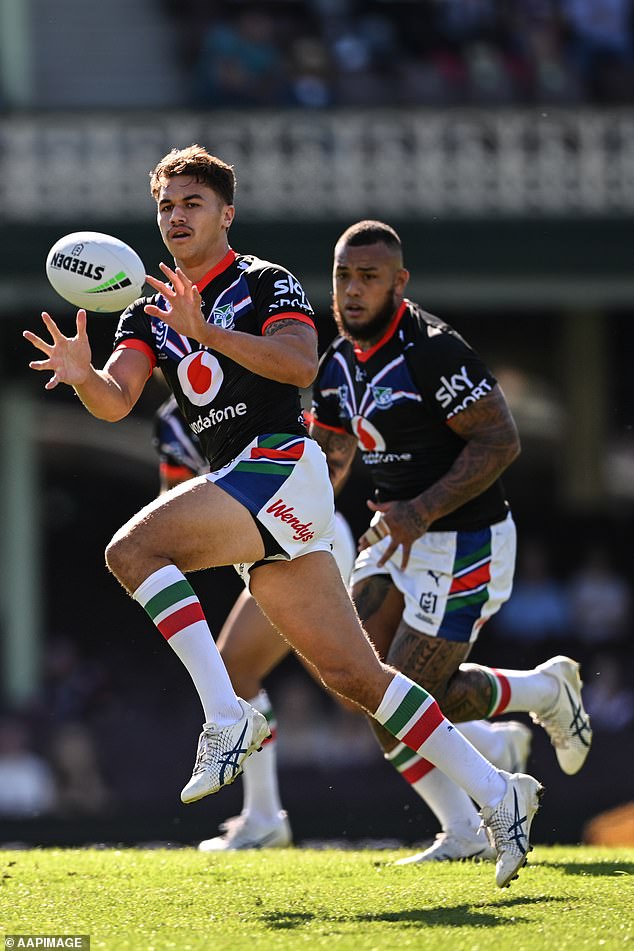 Harris-Tavita (pictured with ball) put in a brave Anzac Day performance, playing 46 minutes with a ruptured testicle and making 18 tackles with no misses

Brien Seeney, who runs the popular NRL Physio Twitter account, said the injury occurs when external force drives against the testicle, tearing the outer casing and forcing the innards through the hole.

The free-running half started the game off in fine form, shooting through a no-look pass for Watene-Zelenzniak to score untouched in the 18th minute.

The ruptured testicle injury is a rare knock that most recently plagued Tyson Frizell in 2019, while playing for the Dragons against the Cowboys. 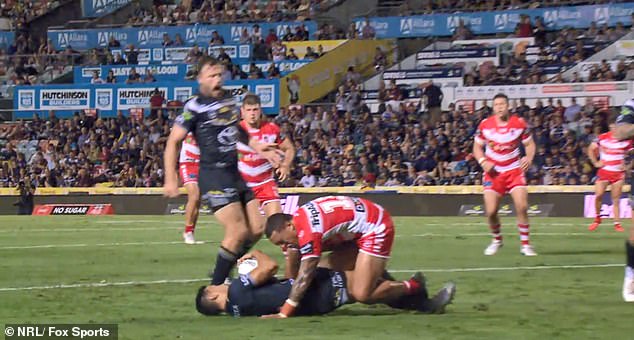 Tyson Frizell (in red jersey) ruptured his testicle in 2019 after a knee to the groin while making a tackle, sidelined for two weeks after surgery.

The NSW back-rower stayed on the field after the impact but required surgery.

Harris-Tavita’s setback adds to the growing list of injuries for the Warriors side.

In-form lock Josh Curran has been sidelined for a month with a knee injury, while winger Dallin Watene-Zelezniak will miss one round after suffering a scary head knock against Melbourne.

The Warriors face off against the Raiders on Saturday afternoon at Redcliffe.