By Anneta Konstantinides For Dailymail.com

A Washburn University football player was killed, and his teammate who was just selected by the Giants in the NFL draft was injured, during an off-campus shooting.

Dwane Simmons was killed on Sunday morning. He had been out celebrating with Corey Ballentine, who had been drafted just hours earlier.

Authorities responded to reports of gunfire in a residential street around 12.45am in Topeka, Kansas. 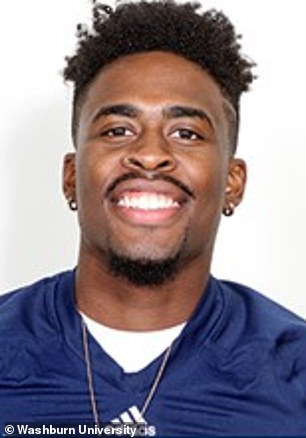 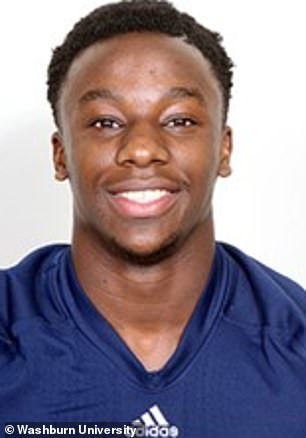 Simmons was killed on Sunday morning. He had been out celebrating with teammate Corey Ballentine (right), who had been drafted just hours earlier

Police said that Simmons was killed in the street from a gunshot wound, according to WIBW.

Ballentine is expected to make a full recovery. Details of his injuries have not been released.

Washburn president Dr Jerry Farley broke the devastating news on Sunday morning with a letter to the Kansas university.

‘Any time we lost a student it is a sad occasion, but it is particularly poignant to lose a student through such a senseless act,’ the statement read.

‘Both Dwane and Corey have been great examples and representatives of the football team and of Washburn University in general.’

‘This was a terrible way to end a day which should have been a day of celebration and a day to look forward to Dwane’s upcoming year at Washburn and the beginning of Corey’s professional career.’

‘Dwane is one of the most energetic and well-liked players I have ever coached at Washburn,’ he said in a statement.

‘Dwane’s infectious smile and love for football and his teammates was truly inspirational. Our prayers of healing go out to his family, his parents Navarro and Yasmine Simmons and Chaquilla Williams.’

Simmons was a junior mass media major from Lee’s Summit, Missouri. He played at Washburn from 2015 to 2018, overcoming two knee injuries.