The 23-year-old faces charges including one felony count of strangulation, three counts of assault and battery and one count of destruction of property, according to the Loudon County Sheriff’s Office.

Guice turned himself in to police in Leesburg, Virginia, just after 5pm Friday, according to the Washington Post.

The Washington Football Team released a statement two hours after that, announcing that they have released Guice from the team. 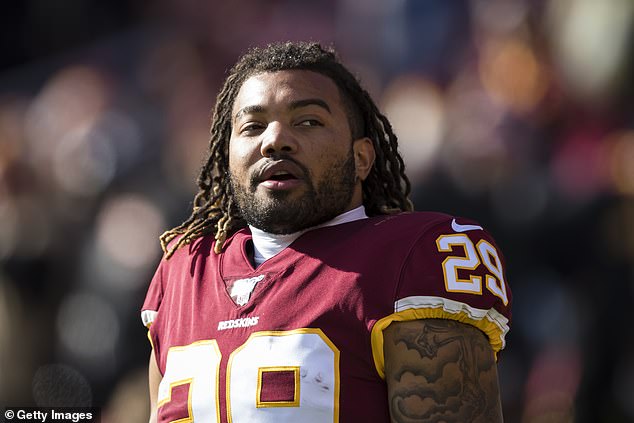 Guice faces domestic violence charges including strangulation and assault and battery. He is pictured here on the field in November 2019

The Washington Football team said that they first learned about a ‘potential domestic violence related incident’ involving Guice on Thursday and told the NFL, according to team’s tweeted statement.

The team then met with Guice and excused him from team activities while they reviewed the situation that day.

‘This afternoon we learned that there were multiple charges filed against Derrius,’ the team said in a statement Friday. ‘Upon review of the nature of these charges and following internal discussions, we have decided to release Derrius immediately.’ 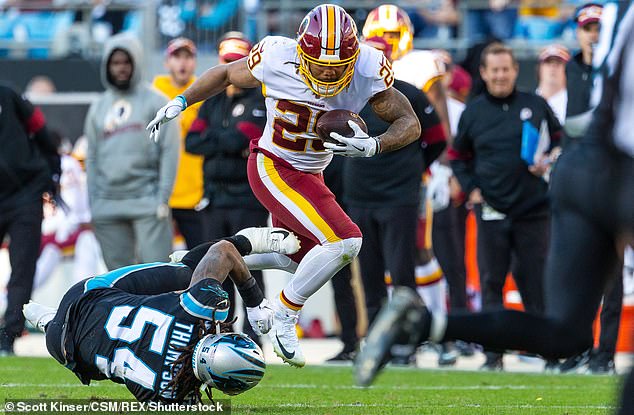 The Washington Football Team said they first heard about the domestic violence allegations on Thursday and notified the NFL. Guice (in white) is pictured in December 2019 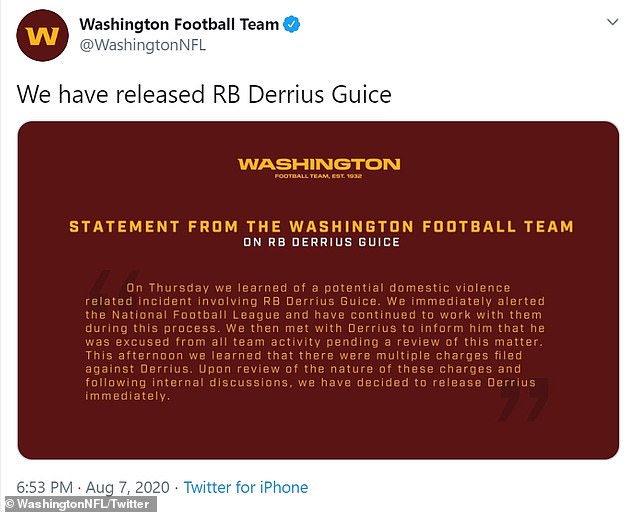 Police said the charges against Guice are related to three alleged domestic violence incidents that occurred this year on February 14, March 13 and April 17, an ESPN reporter tweeted Friday night.

The sheriff’s office told the Washington Post that the three incidents occurred at Guice’s home in Ashburn, Maryland, and were reported to the state’s Montgomery County Police Department.

Police said they first heard about the alleged incidents on July 22.

The victim of the alleged domestic violence has not been named.

Guice was released on a $10,000 unsecured bond and drove away from the police station in a silver Range Rover at about at about 7.30pm Friday.

Guice was drafted by the Washington Football Team in 2018 and is considered a fan favorite, who was known for live-streaming himself playing Fortnite from his bedroom in home state Louisiana in 2018.