Blue Origin’s protest against NASA’s decision to award a contract to build the lunar lander for the Artemis mission to a single company was denied Friday by the US Government Accountability Office (GAO).

The ‘congressional watchdog’ released its conclusion that found ‘NASA did not violate procurement law or regulation when it decided to make only one award,’ which was Blue Origin’s entire defense on the matter.

The Jeff Bezos-founded company, along with Dynetics, which was also in the running, filed the protest in April after the American space agency awarded a $2.9 billion contract to Elon Musk’s SpaceX.

‘The announcement reserved the right to make multiple awards, a single award, or no award at all,’ GAO shared in a press release.

‘In reaching its award decision, NASA concluded that it only had sufficient funding for one contract award.’

‘As a result, GAO denied the protest arguments that NASA acted improperly in making a single award to SpaceX.’

Days after the protest was filed, NASA told SpaceX to halt building a lunar spacecraft until the GAO made its ruling.

Today’s announcement means Musk’s company can restart work to land the first woman and next man on the moon.

GAO’s Friday announcement also concluded that there was no need for NASA ‘to engage in discussions, amend, or cancel the announcemrf5rent as a result of the amount of funding available for the program.’

A Blue Origin spokesperson told DailyMail.com in email: ‘We stand firm in our belief that there were fundamental issues with NASA’s decision, but the GAO wasn’t able to address them due to their limited jurisdiction. 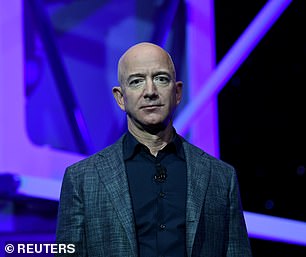 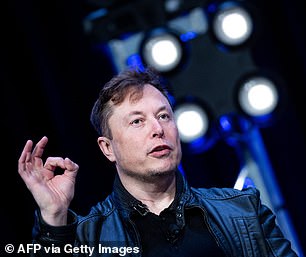 The Jeff Bezos-founded company, along with Dynetics, which was also in the running, filed the protest in April after the American space agency awarded a $2.9 billion contract to Elon Musk’s SpaceX.

‘We’ll continue to advocate for two immediate providers as we believe it is the right solution.

Musk also responded to the decision by posting ‘GAO’ with the strong arm emoji on Twitter, which is the typical gesture of someone who won a fight.

NASA made the initially announcement about the lunar lander contracts in April 2020.

It awarded the Blue Origin team with $579 million, the Dynetics team with $253 million and SpaceX with $135 million.

The firms were given until 2021 to create a lander and then NASA would choose one or more winners to turn the design into a working spacecraft.

Musk also responded to the decision by posting ‘GAO’ with the strong arm emoji on Twitter, which is the typical gesture of someone who won a fight

On April 16, 2021, NASA announced SpaceX was going to be the only company to construct a lunar lander.

SpaceX received a $2.9 billion contract, which was reportedly much lower than what competitors bid.

Hours before the official announcement, The Washington Post, which is owned by Bezos, broke details of the contract, reporting the Musk-led firm had beat out Blue Origin and Dynetics.

The Post branded Musk’s win a ‘stunning victory’ over Bezos, adding: ‘The defeat is a huge blow Blue Origin, and to Bezos.’

Bob Smith, CEO of Blue Origin, said in April that NASA’s decision to award the contract to SpaceX was based on flawed evaluations.

Smith also accused NASA of placing a bigger emphasis on cost than it said it would.

He said the space agency should have stuck to its oft-stated desire to award the contract to two companies.

‘It’s really atypical for NASA to make these kinds of errors,’ Smith told the Times.

‘They’re generally quite good at acquisition, especially its flagship missions like returning America to the surface of the moon.

‘We felt that these errors needed to be addressed and remedied.’

‘NASA has executed a flawed acquisition for the Human Landing System program and moved the goalposts at the last minute,’ the company said in a statement.

‘In NASA’s own words, it has made a ‘high risk’ selection,’ the Blue Origin statement said. 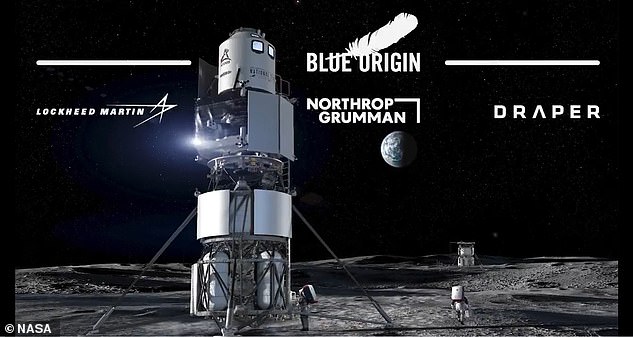 A Blue Origin spokesperson told DailyMail.com in email: ‘We stand firm in our belief that there were fundamental issues with NASA’s decision, but the GAO wasn’t able to address them due to their limited jurisdiction.  Pictured is Blue Origin’s concept for the lunar lander

‘Their decision eliminates opportunities for competition, significantly narrows the supply base, and not only delays, but also endangers America’s return to the Moon.

‘Because of that, we’ve filed a protest with the GAO.’

Nonetheless, the Blue Origin spokesperson told DailyMail.com on Friday that it ‘has been encouraged by actions in Congress to add a second provider and appropriate additional resources to NASA’s pursuit to return Americans to the Moon.

The Artemis mission, which is set for 2024, will see four spacefaring heroes board the Orion spacecraft and be jetted off to space by NASA’s powerful Space Launch System (SLS).

Once in orbit, two crew members will transfer to the SpaceX HLS and head to the moon.

After approximately a week exploring the surface, they will board the lander for their short trip back to orbit where they will return to Orion and their colleagues before heading back to Earth.

SpaceX revealed plans for its lunar lander on April 16, which will include the company’s tested Raptor engines, along with pulling inspiration from the Falcon and Dragon vehicles’ designs.

The lander will feature a spacious cabin and two airlocks for astronaut moonwalks.

‘The Starship architecture is intended to evolve to a fully reusable launch and landing system designed for travel to the Moon, Mars, and other destinations,’ NASA shared in the April announcement.