Wayne Lineker’s daughter Tia has announced that she’s pregnant with her first child.

Tia, 22 – who is the youngest of Wayne’s four children – took to Instagram on Sunday to announce the news, as she shared a snap of herself debuting her growing baby bump while posing with her partner Harry Agombar.

In making the Father’s Day announcement, mother-to-be Tia wrote: “half of me, half of you… baby Agombar due November 2021.’

Baby on board: Wayne Lineker’s daughter Tia has announced that she’s pregnant with her first child. Pictured with her partner Harry Agombar

Ibiza club owner Wayne, who just a day earlier had celebrated a granddaughter’s birthday, commented: ‘Congratulations to the most special couple you will make the most perfect parents …Grandchild no3. Love you forever.’

Love Island star Molly-Mae Hague, who is in a relationship with Tommy Fury, also congratulated the parents-to-be, writing: ‘OH MY GOD!!!! I can’t believe it!!!! You’re going to make the most amazing parents♥️ congratulations you two♥️.’ 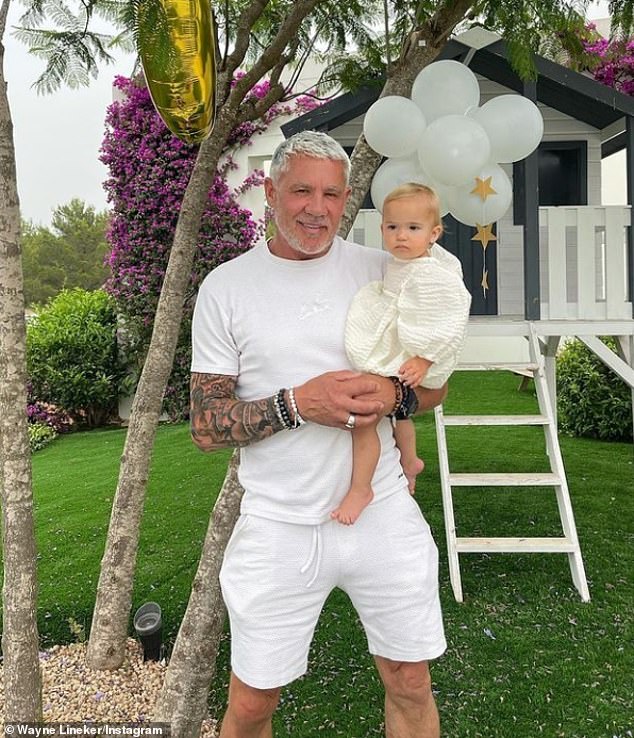 Grandaddy cool: Wayne Lineker (pictured with with his granddaughter on her first birthday over the weekend) revealed that Tia’s baby will be his third grandchild

‘Oh my Jesus lordddddd this is amazing,’ wrote Montana Brown, ‘congrats you’re both so wonderful xxxx.’

Meanwhile, Chloe Lewis stated: ‘Ohh Congratulations to you both! So happy for yous! Big kiss to you both.’

Sharing the same image on her Instagram story, Tia said that her pregnancy news was ‘the hardest secret we have had to keep.. but so so special and so happy to finally share this journey with you guys.’

Dad-to-be Harry also announced the news on his own Instagram account with a similar snapshot, as he wrote: ‘All I’ve ever wanted… Baby Agombar due November 2021. The greatest gift you could have ever given me @tialineker love you always.’

Responding to his post, Tia wrote: ‘The best daddy… we love you so much.’ 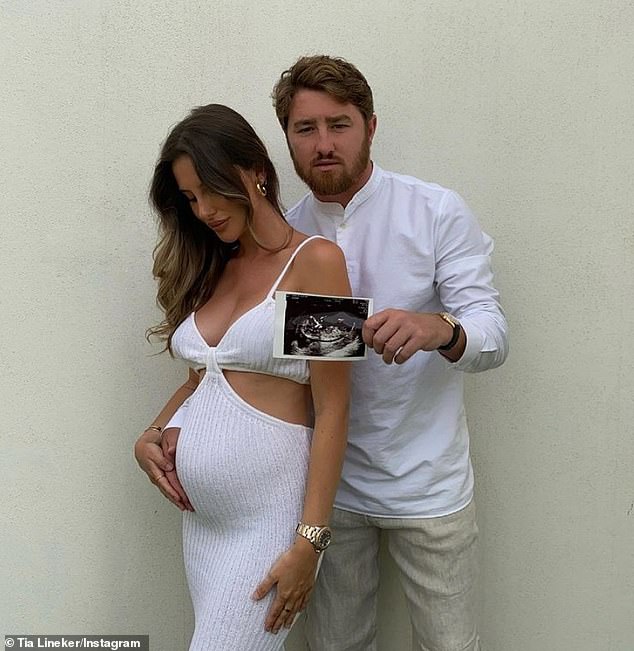 Pic: Tia and Harry shared slightly different snaps from their shoot on their respective accounts 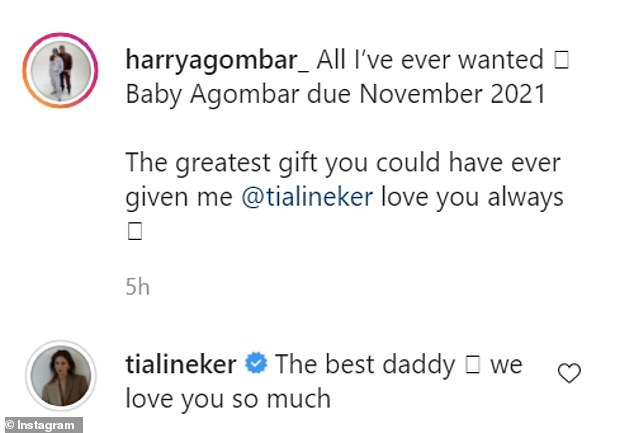 Wayne co-founded Ibiza hot spot Ocean Beach with Duane, while his middle son works in his other clubs.

Businessman Wayne is believed to be single and he appeared on the 2020 series of Celebs Go Dating in hopes of finding his perfect match.

His co-star Chloe Ferry, 25, claimed in May that Wayne still wants to marry her after they joked they were engaged in a flirty Instagram post following the show.

Speaking to The Sun, the Geordie Shore star said: ‘If Wayne could get his way and marry me he would.’

She added: ‘He’s one of my best friends in the whole world. I love him so much. We get on so well but we are just friends.’ 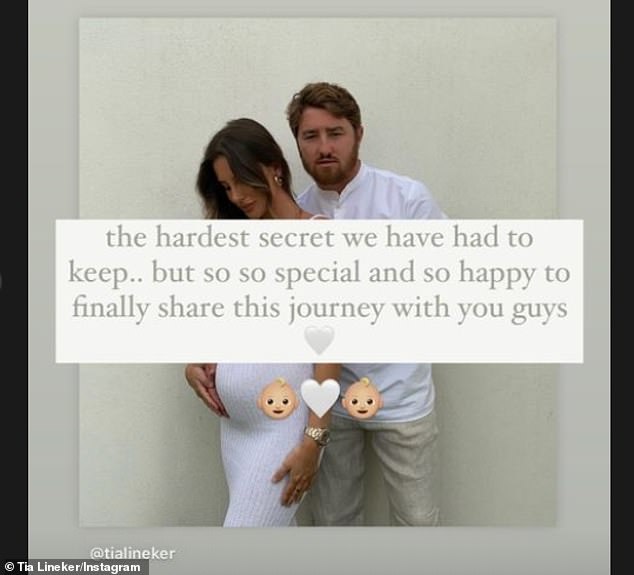 Hard to keep the secret: Sharing the same image on her Instagram story, Tia said that her pregnancy news was ‘the hardest secret we have had to keep’

Congratulations: Molly-Mae Hague led the congratulatory messages for the parents-to-be 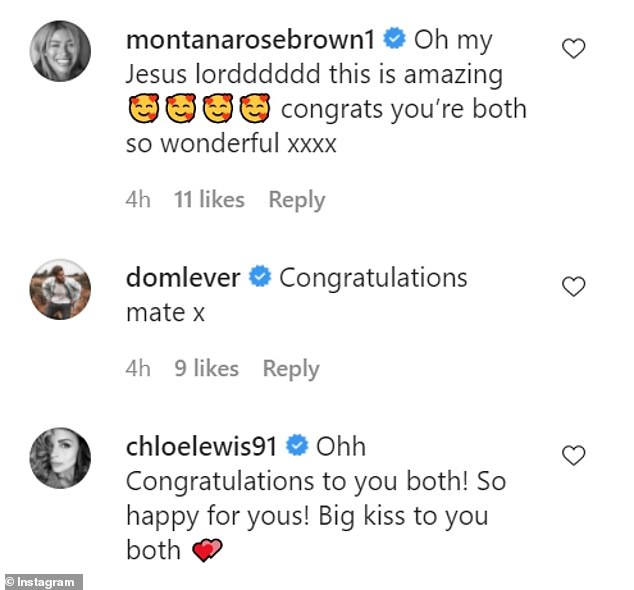 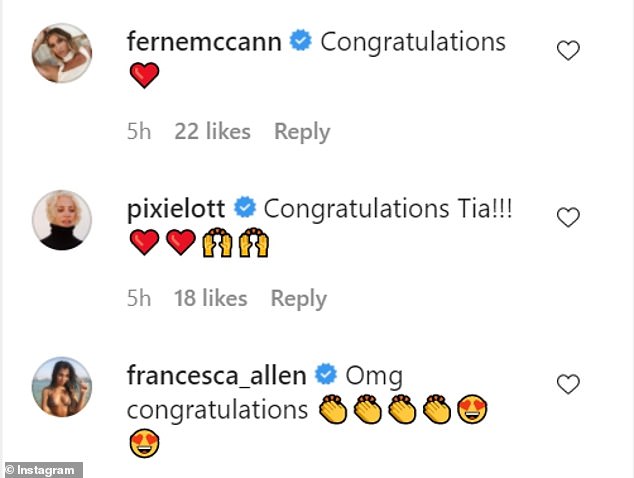 Dose of reality: Tia’s comments section was flooded with congratulatory messages from a veritable who’s who in British reality TV