Wayne Rooney’s fury as younger brother, 31, is filmed beaming with his arm around Tommy Robinson in pub toilets on night out

Wayne Rooney’s brother has been filmed beaming with his arm around Tommy Robinson on a night out.

The football star, 33, has been left ‘furious’ after a video emerged of his younger brother Graham, 31, with the far-right activist in a Liverpool pub’s toilets.

The footage shows Graham, who started out at the same youth team as his brother but never turned professional, grinning with the former EDL leader.

A third unidentified man appears on the other side of Robinson and shouts: ‘Tommy Robinson’s our new sponsor.’

Robinson, whose real name is Stephen Yaxley-Lennon, replies: ‘Go on Rooney’, but Graham seems unable to speak and just smiles at the camera.

Wayne Rooney, 33 (pictured left) has been left ‘furious’ after a video emerged of his younger brother Graham, 31 (right) with far-right activist Tommy Robinson in a Liverpool pub’s toilets

Wayne Rooney has never explicitly stated his political views, but sources have told The Sun the striker is hugely embarrassed.

A friend told the newspaper: ‘Wayne has spent the last 17 years sharing dressing rooms with players from every creed, colour and race. 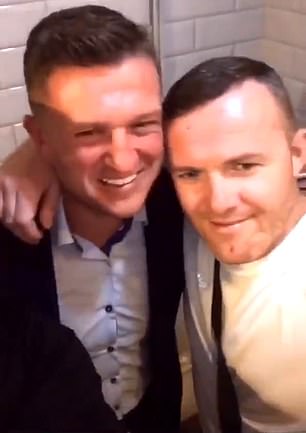 ‘He will be furious about what Graham has done. He has brought shame on the family name.’

The unknown man in the clip, which was filmed inside the Slaughter House pub in Liverpool following Robinson’s appearance at a rally in Merseyside, says to him: ‘Tell em what you’re having now’.

Robinson replies: ‘No, I can’t That’s going to be in a newspaper,’ before the pair burst out laughing.

Graham, who still lives with his parents in the West Derby area of Liverpool, remains silent throughout the clip.

Robinson has been on a tour of the country after he announced his candidacy in tomorrow’s European elections.

He is running as an independent in the north west of England and has been slammed for his anti-Islam rhetoric by local faith leaders.

Two of his campaign visits have been marred by people throwing milkshakes at him.

Yesterday at a rally in Preston a brick was reportedly thrown at his campaign van.

He filmed himself as he showed his followers the damage saying: ‘We’re in Preston and our bus screen has been bricked.’

Graham, is the middle Rooney sibling. His younger brother John, 28, and older brother Wayne all started out at Everton youth team.

John currently plays for National League Club Barrow and has been known to play in the USA’s MLS.

While Wayne made history as England’s youngest player, while also enjoying major success at Manchester United.

Graham was handed a two-year driving ban at Liverpool Magistrates Court at the age of 24 but being three times over the drink-drive limit. 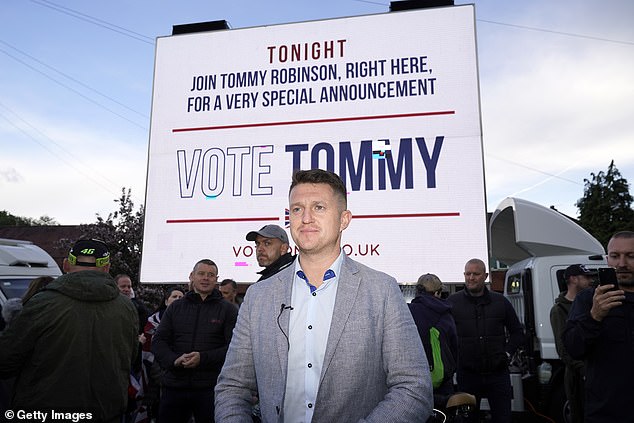 Robinson has been on a tour of the country after he announced his candidacy in tomorrow’s European elections. He is pictured in Wythenshawe, Greater Manchester last month