Ajax manager Erik ten Hag praised his young lions after the Dutch club moved within touching distance of the Champions League final after a deserved 1-0 win at Tottenham on Tuesday.

Donny van de Beek’s well-taken 15th minute goal put Ajax firmly in the driving seat against a disappointing Spurs side who face a tough task to turn around the semi-final in next week’s second-leg in Amsterdam.

‘A fantastic achievement. We fought like lions,’ Ten Hag said. ‘We are halfway there and in good shape. The willpower was very nice to see.’

Having beaten holders Real Madrid and fellow European giants Juventus on the way to their first Champions League semi-final since 1997, Ajax again showed why so many of their squad are attracting attention from some of the continent’s biggest clubs.

Van de Beek was superb and even overshadowed Barcelona-bound fellow midfielder Frenkie de Jong, while 19-year-old captain Matthijs de Ligt showed maturity beyond his years to marshall the defence as Tottenham improved after the break.

Had David Neres not been denied by the post late on Ajax’s position would look impregnable, but Ten Hag knows the job is not yet completed.

‘I think it’s an excellent result for us. We won the game. We are satisfied. We have a very good starting point, but we’re only halfway through,’ he told reporters. 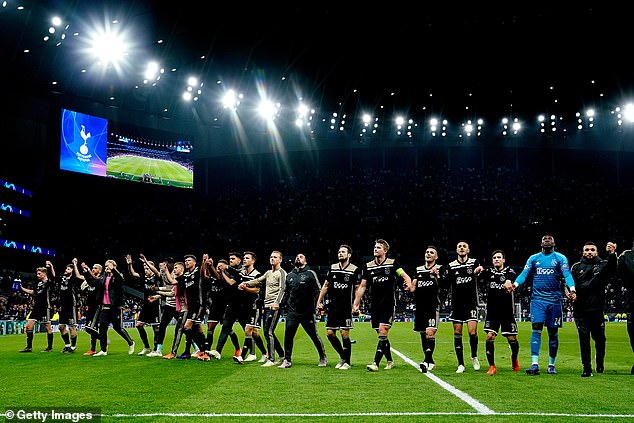 The 22-year-old Van de Beek said he still expected a tough battle next week in the Johan Cruyff stadium.

‘The first 30 minutes were good but we found it tough after that. They changed things up and we had difficulty dealing with that,’ he said. ‘The second half was really a battle.

‘It will be a tough game next week in the Arena, but with our own supporters behind us it will certainly be a huge boost to reach the final.

‘We have to develop a good tactical plan so we can play like we did in the first 30 minutes this evening.’ 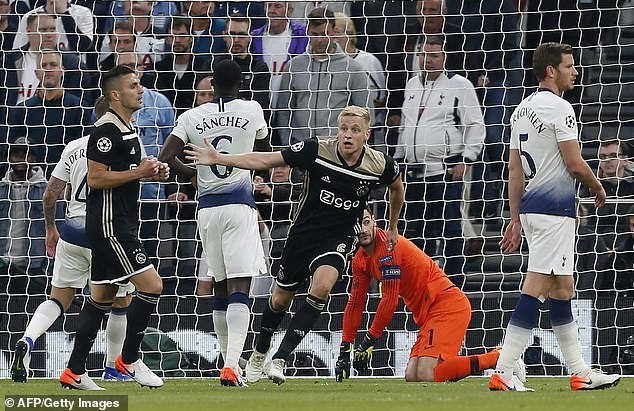