‘We have lots of things to improve’: Pep Guardiola’s message to his Manchester City squad

‘We have lots of things to improve’: Pep Guardiola’s message to his Manchester City squad if they want to be ‘real contenders’ in Europe

Manchester City manager Pep Guardiola has vowed to improve his side, despite their return to the top of the Premier League.

City went back above Liverpool on goal difference after a 1-0 win at Tottenham on Monday night, which came courtesy of Riyad Mahrez’s early goal.

It was their eighth win from 10 games and sixth league clean sheet on the bounce, but it was far from a vintage performance on a shocking playing surface at Wembley.

And the Spaniard has fired a warning to the rest of the Premier League that he wants his side’s standards to be higher.

‘We have a lot of things to improve if we are to be a real contender,’ he said.

‘We are a very good side. I am not saying the opposite, but when you are going to play at important stages in the last third of the Premier League and especially in Europe, we demand another issue or points that we don’t have.

‘That is why hopefully we can talk about that and train for that and hopefully in the future we can improve that.’

Guardiola acknowledged that the playing surface at Wembley, which was in a poor condition due to the NFL game held 24 hours earlier – the third American Football game at the stadium in a fortnight – was a mitigating factor.

Spurs had a fine chance to level in the final 10 minutes, but Erik Lamela skied an effort from 10 yards when he only had Ederson to beat, with replays showing the ball bobbled before he made contact with it. 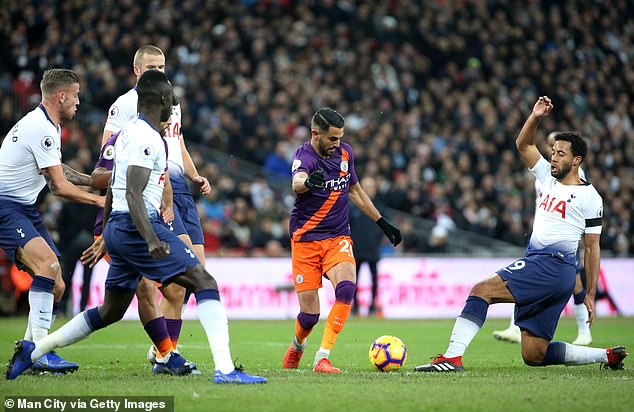 ‘To play a game on that pitch is not easy and that’s why there were many mistakes that normally should not happen,’ Guardiola added.

‘But even knowing that I had the feeling that we have a lot of things to improve.

‘When we played at the Emirates, at Anfield and Wembley it is normal that you are going to concede chances against an opposition that is so tough and so good. 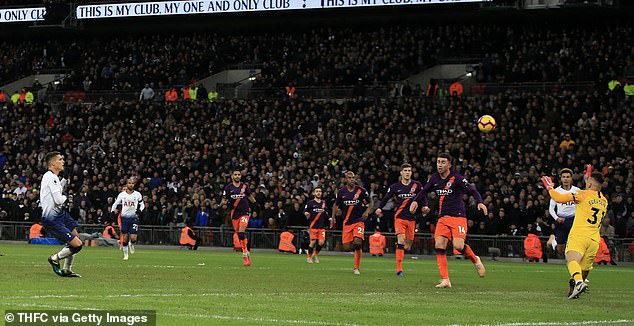 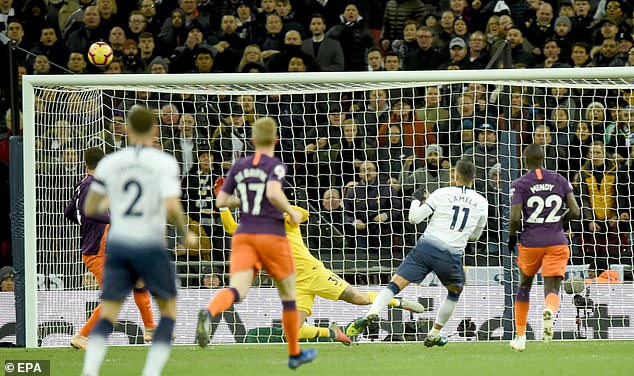 ‘It is important to get clean sheets, but it was a little bit exceptional, it was only due to the grass that they didn’t score.

‘If the grass was better I am pretty sure Lamela, with his quality and left foot, would score.’

City host Fulham in the fourth round of the Carabao Cup on Thursday evening, before a clash with struggling Southampton on Sunday afternoon.