It’s a widely known fact that many dogs view their own dung as a delicacy.

Up until now, however, it’s been a scientific mystery.

A quick Google search for ‘Why does my dog eat its own poop?,’ will turn up a whole myriad of answers. Many claim that the dog’s breed, gender, age, diet, training or living conditions may be the reason to blame.

A team of veterinary researchers at University of California at Davis beg to differ. The reason could be that your dog is a ‘greedy eater,’ – or perhaps, they say it may have to do with their ancient wolf ancestors.

In a  survey of 1,552 dog owners, about 16% said they had witnessed their dog eating their own poop up to six times. Researchers at UC Davis say it may have something to do with the dog’s eating behavior, or more likely, it’s an old survival habit from dogs’ ancient wolf ancestors

The scientists surveyed more than 3,000 dog owners to discover what may be motivating pups to gobble down their own or other dogs’ feces.

The first survey asked 1,552 dog owners how often their pooches were guilty of eating poop.

Roughly 16% of the respondents said they had seen their dogs eat poop as many as six times, making them ‘frequent stool eaters,’ also referred to as ‘coprophagics.’

Among the dogs who indulged in eating poop, about 62% of them ate poop daily, while 38% do it weekly.

So, while your dog is likely to eat poop no matter if it’s a poodle or a dachshund, the scientists said your pup’s eating behavior may indicate if it’s more often eyeing the stinky stuff.

The second survey, which involved 1,475 respondents, tried to uncover the reason why so many dogs choose to eat poop.

The scientists found that dogs are more likely to be labeled as ‘coprophagic’ if they’re considered ‘greedy eaters.’

There’s a historical precedent for this theory, too.

Prior studies have shown that free-roaming dogs in developing countries are more likely to scavenge through trash and feces in order to find their next meal.

This behavior may still be present in modern day dog populations, James Serpell, a professor at the University of Pennsylvania veterinary school, told the Washington Post. 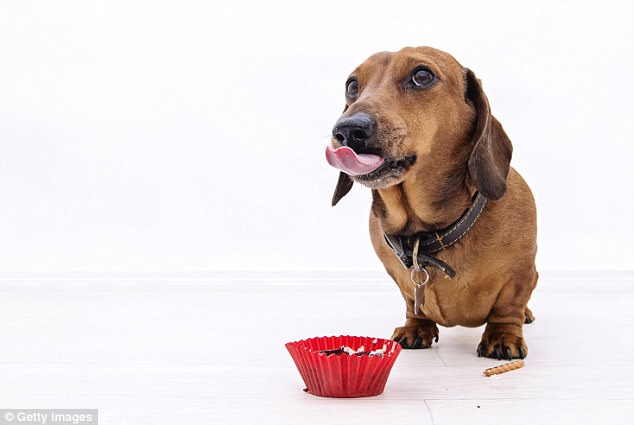 The study also revealed some bad news for dog owners. People who are looking for an antidote to their dog’s poop addiction are out of luck, since existing food additives and pills don’t work

While dogs are more often willing to scarf down droppings that they or others are leaving behind, it turns out that they can still be picky at times.

The scientists found that dogs are only interested in eating fresh feces, or poop that’s fewer than two days old.

Dogs’ ancient wolf ancestors may be the reason behind this thinking.

When an old or injured wolf would poop where others live, a wolf would attempt to clean it up by eating it.

Most wolf poop would be infected with parasites, so in order to eat the feces before parasite eggs hatched, wolves would scarf it down within two days of it being deposited.

SCIENTISTS REVEAL WHY YOUR DOG ENJOYS SCARFING DOWN ITS OWN POO

A team of scientists from University of California at Davis surveyed thousands of dog owners to figure out why dogs are drawn to eating their own and other dogs’ doo doo.

While it has nothing to do with breed, age, or training, they did discover that dogs are more likely to eat poop when there are multiple dogs in one home.

Ultimately, the impetus for the disgusting behavior likely has something to do with their wolf ancestors, which ate fresh poop before it became infected with parasites as a way to clean up any droppings left around their dwellings.

Don’t expect a pill to help prevent poop eating any time soon, however.

The scientists found that food additives and other techniques have no success at preventing dogs from scarfing down feces.

That instinct may have lasted the test of time and could be the reason why dogs still eat their own or others poop today.

While the nausea-inducing behavior may not seem so mysterious now, the researchers said an antidote doesn’t exist just yet.

Interestingly, the survey also found that commercial products, such as food additives and pills, have no effect on the disgusting behavior.

However, Hart and the other scientists indicated that they’ve got some alternative treatments being developed for the near future.