Drivers in Bangor pay the least on their car insurance premiums with motorists in the Welsh city paying an average of £276 a year, new research from Rivervale Leasing revealed.

This is £189 less – equivalent to 40 per cent – than the national average of £465, according to data from the Association of British Insurers.

The industry body recently revealed the average cost of motor insurance is £30 cheaper than last summer and £44 lower than the first three months of 2020, prior to the pandemic.

However, some cities are enjoying even cheaper premiums with Bath and Carlisle closely following Bangor with drivers paying an average of just £260 and £261, respectively.

The data was updated in August 2021 to reflect the most recent average insurance price, according to the ABI.

The quotes were requested using the same factors except for the driver’s postcode.

It revealed Bangor could have the lowest premiums as it has the low accident rates in the area.

A spokesperson for Rivervale Leasing said: ‘Insurance rates can be affected by a number of factors such as your age, occupation, where you live and the security of where you live.

‘In 2019, Wales had the lowest accident rates in the UK with 4,317 road accidents, according to government data, which may explain why Bangor has the lowest insurance premium.

‘Another contributing factor can be the population size of Bangor, as there is an estimate of 8,000 residents and over 10,000 students, who potentially may not be driving often.

‘Bangor is also surrounded by a vast range of coastline and national parks, suggesting there are fewer cars on the road.’

Meanwhile, Manchester follows as the second-most expensive city for car insurance, with quotes averaging at 68 per cent more than the typical annual policy – an increase of £318.

Living in Liverpool could also set drivers back as it came in as the third-most expensive city, seeing an average increase of 65 per cent or £300 for insurance quotes, costing a total of £730 on average.

However, at the other end of the scale, drivers in Scotland can take advantage of low-cost premiums, as four Scottish cities make the top 10 cheapest places for car insurance.

Aberdeen is the least expensive overall with a yearly average of £266 – 35 per cent cheaper than the average insurance cost, saving up to £164.

Other cities that feature in the top ten cheapest for car premiums include Norwich, Armagh and Salisbury. 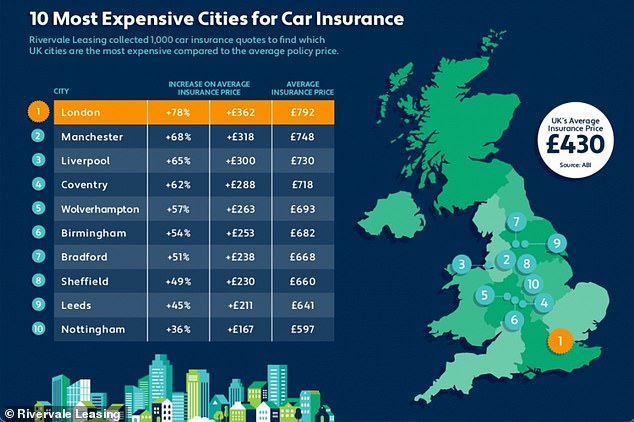 London is, perhaps unsurprisingly, the city with the highest yearly car insurance premiums 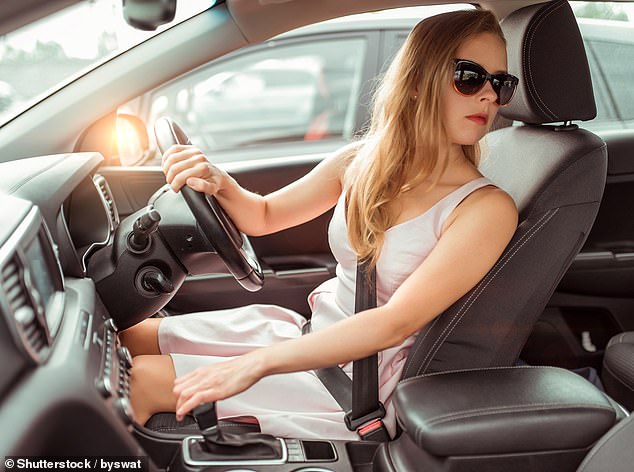 Reversing the cost of car insurance

Research from the ABI revealed the average car insurance premium of £430 is the lowest cheapest quarterly average since the beginning of 2016, when cover typically came in at £429.

This is partly due to the significant drop in car insurance claims during successive lockdowns and fewer vehicles on the roads.

Whilst this is likely to pick up as lockdowns are eased, they are still unlikely to return to pre-pandemic levels with so many people still working from home.

However, the ABI said insurers are still facing the continued cost pressures of rising repair bills.

Laura Hughes, the ABI’s manager of general insurance, said: ‘While underlying cost pressures around rising repair bills will remain, the market will stay competitive, enabling motorists to shop around for the best deal for their needs.

‘It will be interesting to see if there is a rise in motor claims as we emerge from the pandemic and road traffic continues to increase.’