Sweet, spiced and slathered in butter, nothing says Easter like a hot cross bun.

But have you ever eaten yours topped with ice cream? Or how about bacon and ketchup? Or stuffed with slow-roasted lamb?

These quirky suggestions all come courtesy of British supermarkets, who are going to extreme lengths in a bid to win the annual bun fight and shift hot cross buns from their shelves.

In Easter week alone, we work our way through 120 million of the teatime treats.

We’ve been eating them the same way — toasted and topped with butter or jam — since the 14th century, when they were invented by an Anglican monk who marked them with a flour cross in honour of Good Friday.

But this year tradition has been turned on its head. Recipes are springing up for all sorts of weird and wonderful ways to eat hot cross buns, including some surprising savoury concoctions — from turning them into toasties to wrapping the bun (yes, raisins and all) around a burger.

So which ones are worth a try — and which will leave you feeling hot and cross? We put the wackiest serving suggestions to the test.

What to do: Rub butter over sides and base of the dish. Slice the buns in half and arrange them, overlapping, in the dish.

In a saucepan, whisk the chocolate milk until it froths and then add the whisked eggs.

Keep stirring for a couple of minutes until it thickens.

Pour the chocolate custard over the buns and bake at 180c for 35 minutes until the custard is bubbling and the buns are crisp on top. Eat with custard or cream.

Verdict: I just love bread and butter pudding, so adding hot cross buns — bursting with fruit and spices — only enhances it, as does the chocolatey milk.

But this pud is extremely heavy, so avoid serving it after a big meal. 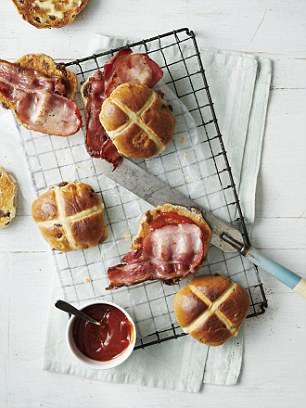 It’s the ultimate combination of sweet and savoury — crisp, salty bacon inside a fruity, glazed bun.

Both Sainsbury’s and the Co-op have incorporated the hot cross buttie in their advertising campaigns, raising eyebrows across the country by fusing two very different breakfast treats. So does it really work?

You’ll need: Four hot cross buns, eight rashersof smoked back bacon (this is the fattiest and most flavoursome, which counteracts the sweetness of the bun), butter and some ketchup.

What to do: Grill or fry the bacon until crisp — grilling is better as it gets rid of the grease and stops it dripping into the bun.

While the bacon cooks, toast and butter the hot cross buns as normal.

Take the bacon out and pat it dry with kitchen roll.

Next, build your butties: a buttered bun half, two rashers of bacon, a squirt of ketchup (or brown sauce) and the bun top.

Verdict: It shouldn’t work but it does. The texture is lovely — crunchy bacon and crisp toasty bun — and the salt is a tasty contrast to the fruit. The tomato ketchup tastes terrible, though, so next time I’ll try maple syrup. 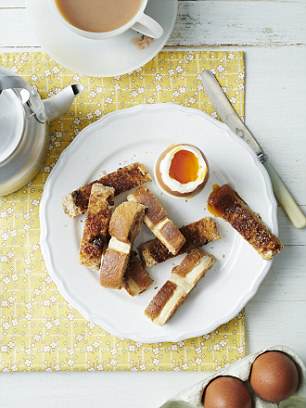 You’ll need: One fresh egg and one bun per serving. If you like Marmite, you could try spreading this on your soldiers to enhance the savoury taste.

What to do: Boil water in a pan and add the eggs, simmering gently for four-and-a-half minutes.

When eggs are almost ready, slice buns in half and toast as normal.

You want your soldiers sturdy, so make sure the bun is golden. Spread with Marmite and slice into strips.

Verdict: I don’t like the combination of savoury, malty egg with sugary bun — and when I come across a raisin it’s so unpleasant I have to spit it out. It’s also tricky to eat as the bun ‘soldiers’ keep falling apart. 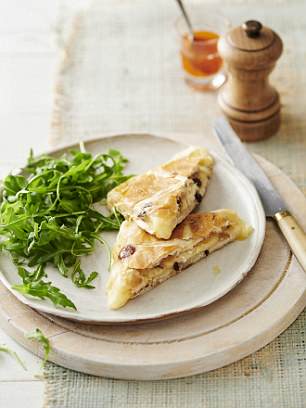 You’ll need: One large hot cross bun per person (try the Co-op, £1 for six), a wedge of Brie, chilli jam and a handful of rocket.

If you’ve got a toasted sandwich or panini-maker, you can make your toastie in this — but wrapping it in greaseproof paper and using a griddle pan works, too.

What to do: Slice bun in half and flatten using a rolling pin.

Butter inside and out. Fill with slices of Brie, jam and rocket.

Put it in the panini-maker or wrap in greaseproof paper and griddle each side for a few minutes until the cheese melts.

Verdict: The combination of oozing, melting Brie, chilli jam and fruit in the bun makes this taste a bit like a cheeseboard. 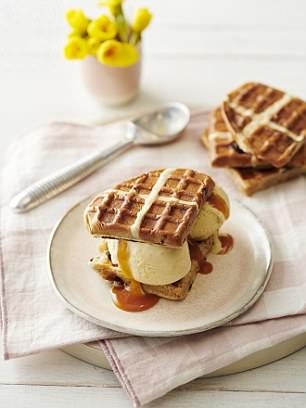 This calorific feast was dreamed up by budget supermarket chain Iceland, who recommend squidging a scoop of ice cream between two halves of a toasted bun.

What to do: First, prepare the buns with a sharp knife by slicing off two of the sides and rounding off the other two into a curve (this makes it look like an ice cream wafer).

Slice each in half horizontally and squash the two halves flat using your palm.

Put buns under a hot grill or in the toaster until crisp (I used a waffle maker).

Cool completely before assembling the sandwich: a bun half on the base, a scoop of ice cream topped with sauce and the other half on top.

Press down so the ice cream oozes out the sides — and eat immediately.

Verdict: Delicious idea but messy: I ended up with ice cream all over my hands and face. 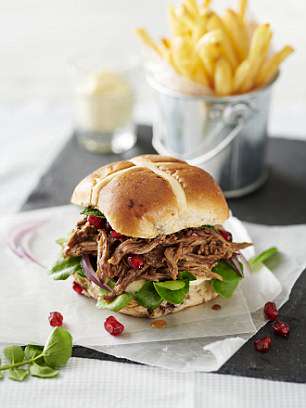 Savoury buns are all the rage — but we’ve gone a step further than M&S’s cheese and onion hot cross buns by stuffing roast lamb inside a bun.

One bun per serving.

What to do: Slice each bun in half and lightly toast the inside under a hot grill.

Spread mayonnaise on the bottom, top with watercress and onion, then the meat, followed by pomegranate seeds and the toasted top.

Verdict: The sweet bun goes well with the melt-in-the mouth meat and tangy salad. The raisins and spices give it a Middle Eastern street food flavour. 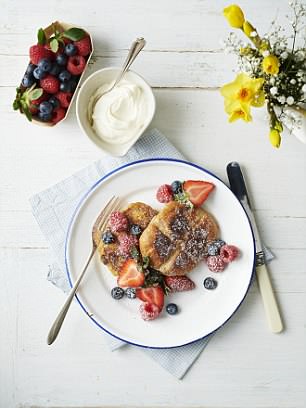 What to do: Whisk eggs and milk together and tip into a large shallow dish. Slice buns in half and put them in the egg mixture to soak for half an hour.

Heat butter in a frying pan. Once it’s sizzling, add the egg-soaked buns and fry on each side for 2-3 mins, until the egg sets and turns golden. Serve hot, topped with cinnamon sugar and berries.

Verdict: They smell gorgeous on the plate but the taste is underwhelming. The buns are doughy, stodgy and still soggy — I can’t eat more than half. What to do: Slice each bun in half and each half into four long fingers. Dissolve coffee granules in 200ml hot water.

Dip bun fingers in the coffee and set aside on a plate.

Whisk cream and stir in cheese, sugar and marsala.

Assemble tiramisu. Start with one or two sponge fingers, then a layer of cream, then sponge, until you’ve used up all the ingredients.

Top with a dusting of cocoa powder and crumbled flake.

Verdict: The bun is denser than sponge fingers so they give the dish a bit of texture — and they go really nicely with the coffee.