‘We will not be favourites at any of the next six races’: Lewis Hamilton fears for Mercedes F1 hopes

‘We will not be favourites at any of the next six races’: Lewis Hamilton worried about Mercedes’ chances at remaining Grands Prix of the Formula One season

Lewis Hamilton fears he will be the underdog in the remaining six races of the Formula One season.

Hamilton heads into this weekend’s Russian Grand Prix with just two victories from his last seven appearances – and a disappointing fourth in Singapore last weekend – while a resurgent Ferrari bid for their fourth win in succession.

Mercedes are unbeaten at the Sochi Autodrome, winning all of the five races staged here.

But Hamilton believes Ferrari drivers Sebastian Vettel, who ended his 13-month losing streak in Singapore, and Charles Leclerc hold the aces – not just ahead of Sunday’s race, but for the remainder of the campaign.

‘We will not be favourites at any of the next six races,’ said Hamilton. ‘It is not my job to worry, but we are conscious of the position we are in.

‘We know how fast Ferrari have been on the straights, so for us there isn’t a short-term fix, but there are other areas we can do better in.

‘At the last three races, we haven’t extracted 100 per cent from the weekend and that is what we need to get back to.

‘I can squeeze more out of the car, more out of myself. I haven’t done a perfect lap yet this season.’ 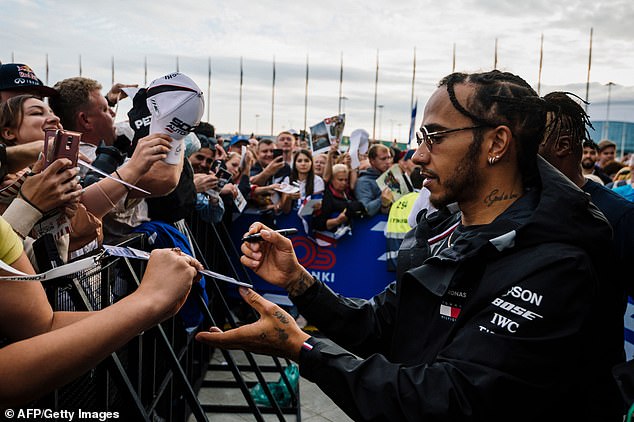 Hamilton, in Sochi ahead of the Russian GP, believes they’ll be the underdogs to win elsewhere

Mercedes have dominated Formula One in recent years and – despite their mini-slump – remain on course to win an unprecedented sixth-consecutive drivers’ and constructors’ championship this term.

Hamilton is 65 points clear of team-mate Valtteri Bottas and 96 ahead of both Leclerc and Red Bull’s Max Verstappen. The latter will serve a five-place grid penalty on Sunday following engine changes, while Vettel is a further six points back with just 156 still to play for.

Yet, should a silver car fail to take the chequered flag on Sunday, it will mark the first occasion since the beginning of the hybrid era in 2014 that Mercedes have gone four rounds on the bounce without a victory.

‘Remaining as the leaders is not an easy task so it is understandable that we will have dips,’ added Hamilton.

‘But I have 100 per cent confidence in my guys. We are still the strongest team and while it has not been spectacular recently, we haven’t been terrible. 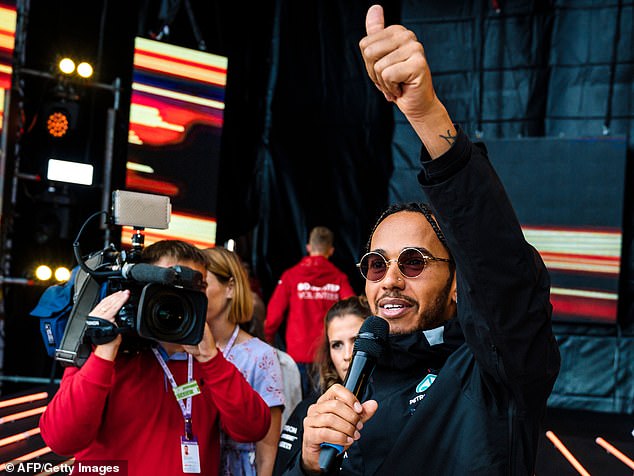 ‘Even if this weekend doesn’t go as planned, and the long straights are likely to suit Ferrari, it is not going to change my opinion as to what we will achieve moving forwards.

‘I know we will make it difficult for every other team this year, next year, and potentially the years after.

‘So, we are not going to give up. It is not part of our DNA and we will keep pushing.’

A tired-looking Hamilton arrived here on Thursday following a Mercedes sponsorship commitment in Malaysia on Tuesday.

He then stopped over in Dubai before making the journey to Russia for the 16th round of the 21-race campaign.

He added: ‘Today I am pretty groggy, but I will be good tomorrow.’