A wealthy entrepreneur who only ever quaffs ionised water is ‘driven mad’ after swapping lives with a family-of-five on benefits because it means she has to drink from the tap.

Antoaneta Tsocheva, known as Toni, and her daughter Diana live in a luxurious six-bedroom, six-bathroom home in the Hertfordshire countryside which boasts expansive open-plan living and a picturesque garden.

On this week’s episode of Rich House Poor House they trade lives with single mother Naomi Paul and her three children Ella, 13, Ava, 12, and Jacob, six, who reside in a rented three-bedroom ‘rickety’ terraced house in Walthamstow, east London.

Thanks to Covid, grafter Naomi – who has worked as an au pair, in a carehome and as a teacher of adults with learning difficulties before starting training to be a counsellor – lost her jobs and the family now survive on benefits which leaves them with just £62 a week to live on.

Antoaneta Tsocheva, known as Toni, and her daughter Diana live in a luxurious six-bedroom, six-bathroom home in the Hertfordshire countryside which boasts expansive open-plan living and a picturesque garden

But the minimal budget isn’t the thing Toni struggles with the most during the week-long swap.

‘It’s just driving me mad that I have to drink tap water,’ she says as she boils up a pan to try to purify it. ‘I can see that it’s making me tired and dizzy.’

Toni has a true rags to riches story, having grown up in a village in Bulgaria. She travelled to London 25 years ago with just £500 in her pocket in search of a better life – leaving seven-year-old Diana in the care of her grandparents.

The pair only saw each other once a year but kept in touch via letters until, when Diana was 13, Toni brought her to the UK.

‘I really wanted to create a better opportunity for Diana,’ she explains. ‘It was absolutely heartbreaking leaving her in Bulgaria… My first job was a bartender in an Irish bar, then I found a second job supporting myself as a cleaner in a nursing home. 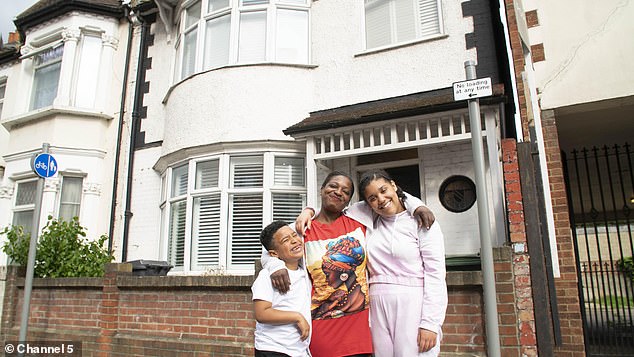 ‘I had an idea about creating a domestic cleaning company, and then I just hired a few people and we all started.’

Her company, Fast Clean, now employs around 260 people and has a turnover in excess of £1.5million.

Diana, who lives in a two-bedroom loft apartment at the top of the house, is also a successful businesswoman, running a rapidly growing web design and digital marketing agency.

The duo also have several smaller ventures in addition to their main businesses, the latest being an online market for eco-friendly homewares, much of which Diana has designed.

Unlike her thrifty mother, Diana is a bit of a spender and loves splashing out on designer ‘tiny handbags’ and trainers – a habit Toni doesn’t approve of.

Toni says the reason she chose to do the life swap is to give Diana a taste of what she went through when she first moved to London and experience what other people go through who are less fortunate than them. 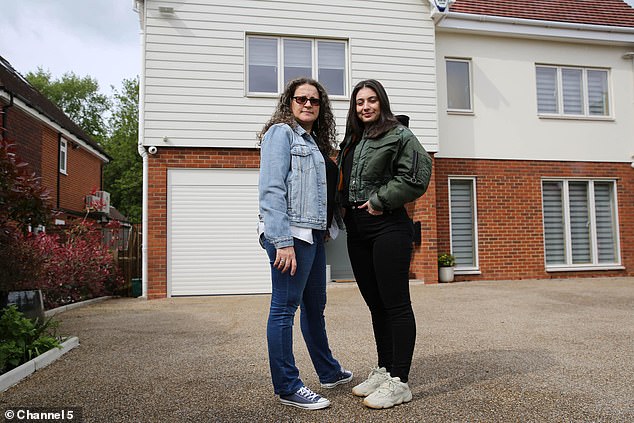 Unlike her thrifty mother, Diana is a bit of a spender and loves splashing out on designer ‘tiny handbags’ and trainers – a habit Toni doesn’t approve of

She’s also keen for her daughter to appreciate how lucky she is to have money.

When she arrives at Naomi’s house in Walthamstow – which is where she lived when she first moved to London – Toni’s instant reaction is to rejig it to suit her passion for Feng Shui. She immediately makes a note to rearrange the bins outside and throws towels across mirrors facing the ‘wrong way’.

The home’s ‘sad’ rundown condition reminds Toni of her struggles, and she breaks down in tears.

Naomi leaves a note reminding her guests to top up the electricity, which triggers a tearful Toni to tell Diana: ‘I had to budget the electric, the water, the gas in Bulgaria, and I know what it is.’

Meanwhile Toni leaves detailed instructions for Naomi and her family so that they can live life in her home as she does, down to the pH level in the water they drink, as well as Bulgarian recipes to try.

Naomi is stunned when she discovers Toni and Diana have a staggering £1,340 to live on per week.

‘When Covid came, essentially I didn’t have anyone to watch the kids, so I had no option but to start staying at home,’ she explains.

Ava has autism, which means being around for her is particularly important, so Naomi is trying to figure out what to do next to bring in some cash.

Spending time living in Toni’s home and leading her lifestyle inspires Naomi to make a change. Hearing from a friend that Toni started from nothing makes her think about pursuing her own business ideas that she’d long abandoned.

On the second day of the swap, after packing her children off to school, she is treated to a personal training session before heading to an organic food store. 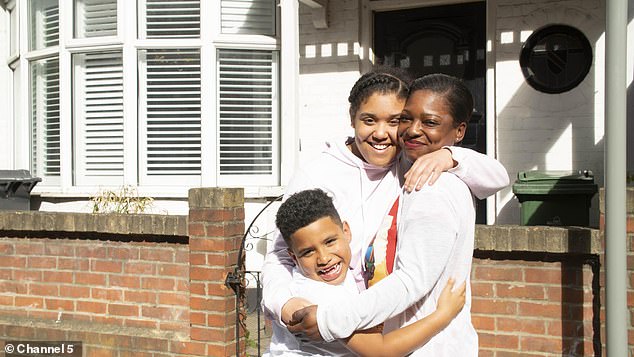 Naomi is stunned when she discovers Toni and Diana have a staggering £1,340 to live on per week

Naomi then visits the head office of Fast Clean to hear about how Toni set up the company.

During the swap she also takes part in a salsa dancing class, admitting afterwards: ‘She was encouraging me to feel like a woman and feel sensual – those kind of things I haven’t felt in a long time. I just feel alive, honestly today has been an amazing day for me.’

Naomi gets taste of running her own business as Toni sends through an eco-bravo order for Naomi to box up for collection. The mother-and-daughter team pack hundreds of parcels a week in their spare time.

‘My mind’s bubbling away, what can we do,’ she tells daughter Ava. ‘I feel like I would like to have something of my own that I’ve built by myself and I can have people that I treat well.’

Meanwhile Diana and Toni manage to do their weekly shop for £15, splashing out on a pot of baking soda to adjust the acid content in the water.

With their electricity in danger of cutting out, they head to the shop to top it up. They also visit a local barbershop where Naomi worked as a cleaner pre-Covid, and are shocked to hear that her job is there if she wants it.

They also pass the house that Toni used to live in when she moved to London – sharing a room with three other women. She explains to Diana why it wasn’t possible for her to bring her with her.

‘This week I really got to understand why you did what you did and why you sacrificed our time together, seven years apart, to build this amazing business, this amazing life for us,’ Diana tells her mother. ‘I’m so grateful and blessed to have you as a mum.’

When a friend of Naomi’s tells Toni and Diana she has dreams of opening a coffee shop or starting up a cleaning business, but lacks focus, Toni points out she’d benefit from having a mentor to help her understand what is possible and ‘encourage her to do well and not just think about the kids’.

The pair vow to help Naomi pursue new opportunities, and when the women meet up at the end of the experiment it’s an emotional moment.

Toni tells Naomi they’ve learned a lot about her during the swap and can see she is trying her best for her kids.

‘You’ve been through a lot and I think it’s time for someone to give you a hand,’ she says.

Tearful Naomi admits she doesn’t know how to ask for help, to which Toni replies: ‘We know that, we’ll figure it out. There’s no coincidence we are here and sitting at this table Naomi.’

Asked how she persevered through difficult times, Toni tells Naomi: ‘I’m the opposite of you, I’m afraid of failure, and because I’m afraid I just don’t stop.’

As well as offering her services as a mentor to help her ‘find her passion’ and open doors, Toni believes Naomi’s first step to success is drinking healthy water.

‘Now I give you an ioniser for your home, because you need to look after yourself,’ she says.

‘I will send my team to fix whatever is broken in your house, to refresh your rooms… My goal is to find your passion and open the door for you, and we want to be your friends.’